Lines between notes in Sibelius - Scoring Notes
Skip to content

Drawing lines (like glissandi or portamenti) between notes in Sibelius can be tedious. Perhaps one of these days lines will behave more intelligently, with automatic collision avoidance for accidentals and staying attached to the notes they connect. (Finale’s glissando lines do the latter; StaffPad’s do both.)

Using the Line Between Notes plug-in

Until, then, thank goodness for Bob Zawalich’s powerful plug-in, Line Between Notes. It automates much of the tedious task of adding such lines, and offers many line options and customization. 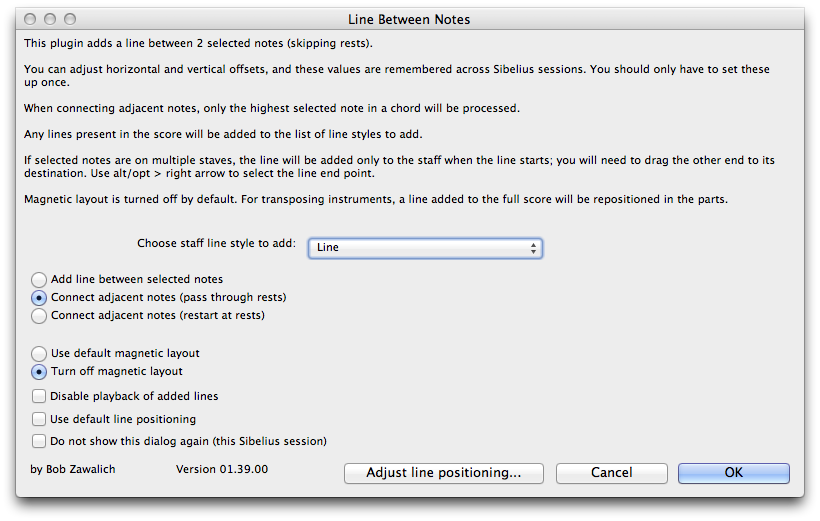 The main thing to keep in mind is that, if possible, you’ll want to run this plug-in nearer to the end of your formatting process; if you change the pitches of your notes, the lines won’t automatically update. Likewise, if you are drawing a line between pitches on a grand staff, you’ll still need to drag the right end of the line to its destination, and if you move the relative position of the staves, you’ll need to re-adjust your line.

Still, its options greatly simplify what is often a painfully tedious task. A number of lines are available: 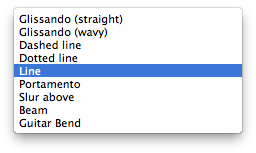 The appearance of these lines can be changed in Notations > Lines > Edit Lines (the downwards right-pointing arrow).

And if you click Adjust line positioning… in the plug-in dialog, you can customize the settings to your liking, which are remembered across Sibelius sessions:

Running the plug-in makes quick work of drawing a passage such as this:

Line Between Notes may be downloaded directly through Sibelius 7 and higher at File > Plug-ins > Install Plug-ins > Lines. You can download the plug-in and install it manually in Sibelius 6 and higher, or by using the Install New Plug-in plug-in.

More than once I’ve used the tab slide, found on the second keypad layout, as a quick way to draw a line between notes:

Their options are rather limited; for while they do automatically move with the notes if you move the notes up or down, you can’t adjust the angle of a tab slide. They are, however, more customizable than they first appear:

Hopefully these tips will, ahem, align with your goals of making Sibelius a little easier when it comes to placing lines in your score.