The fact that Dorico is driven by the semantics of music is the program’s great strength. Before implementing a new feature the designers ask themselves musical questions such as “What does this symbol actually mean?”, “How does it combine with other symbols?” or “Why is it placed on a score in this particular manner?”. This imparts a great deal of sturdiness to the application. However, there are times where semantics must become composer-driven in order to free-up creativity.

This is the intent behind the Lines tool. With this feature, Dorico dives into the complex area of drawing tools.

Lines are so devoid of semantic baggage that the new tool does not even come with a popover. Sure, some lines are available in other tools. But this is Dorico, so those tools have a particular musical meaning — and certain restrictions that arise from it. This is an important distinction.

For example, one can create a playing technique to use a symbol, such as a fermata, that can live on a single staff (as opposed to a proper fermata from the fermata tool that will appear on all staves). However, ascribing a playing technique for playback to that fake fermata is then mandatory — and for lack of a void playback command, one has to fall back to the “natural” playing technique. But that means that in a pizzicato passage, our impostor fermata will cancel the pizzicato playback. Dorico’s Lines tool eschews such semantic minutiae in favor of a more graphical approach which the user can employ according to his or her taste and requirements.

Dorico offers a wide selection of lines. They are divided into two sections: vertical lines and horizontal lines. Horizontal lines can be diagonal, too: it kind of means “not strictly vertical” here.

Let’s start with vertical lines. The new Vertical Lines panel, available from Write mode, allows you to choose from a small array of lines.

Once a chord is selected, clicking on the desired line item will create a line to the left of the notes that spans the whole chord by default. The line will be “sticky” and change length if you start moving notes from the chord up or down. Various choices in the properties panel then allow you to flip the line to the right, make it shorter or longer, change the body of the line or its start/end cap. Text can also be added to all lines except for wiggly and wavy ones.

As you can see from the example above, a vertical bracket can be drawn with dashes (A). The same bracket can then be flipped to the right (B). Different voices can have their own lines (C) or share one (D). Lines can also be drawn across staves that belong to the same player or grand staff instrument (E). Notice the excellent default placement of the added text. Once a line is drawn, its body and caps can be changed (F). It goes without saying that various engraving options are available to fine tune the appearance of all lines.

Vertical lines live and stay at a single rhythmic position. Horizontal lines, however, span between two attachment points at different rhythmical positions. You need to define those points before creating a horizontal line by selecting a passage in the score. The Start/End section at the top of the Horizontal Lines panel allows you to determine whether the endpoints of the line will be attached to concrete noteheads (starting to the right and ending to the left of a notehead), rhythmic positions, or barlines. Any combination of start and end attachment type is possible.

Once we have set up our attachment points as needed, we can select a line type from the panel to create our line. Many properties regarding placement, text, and design of the line can be changed later at any time. 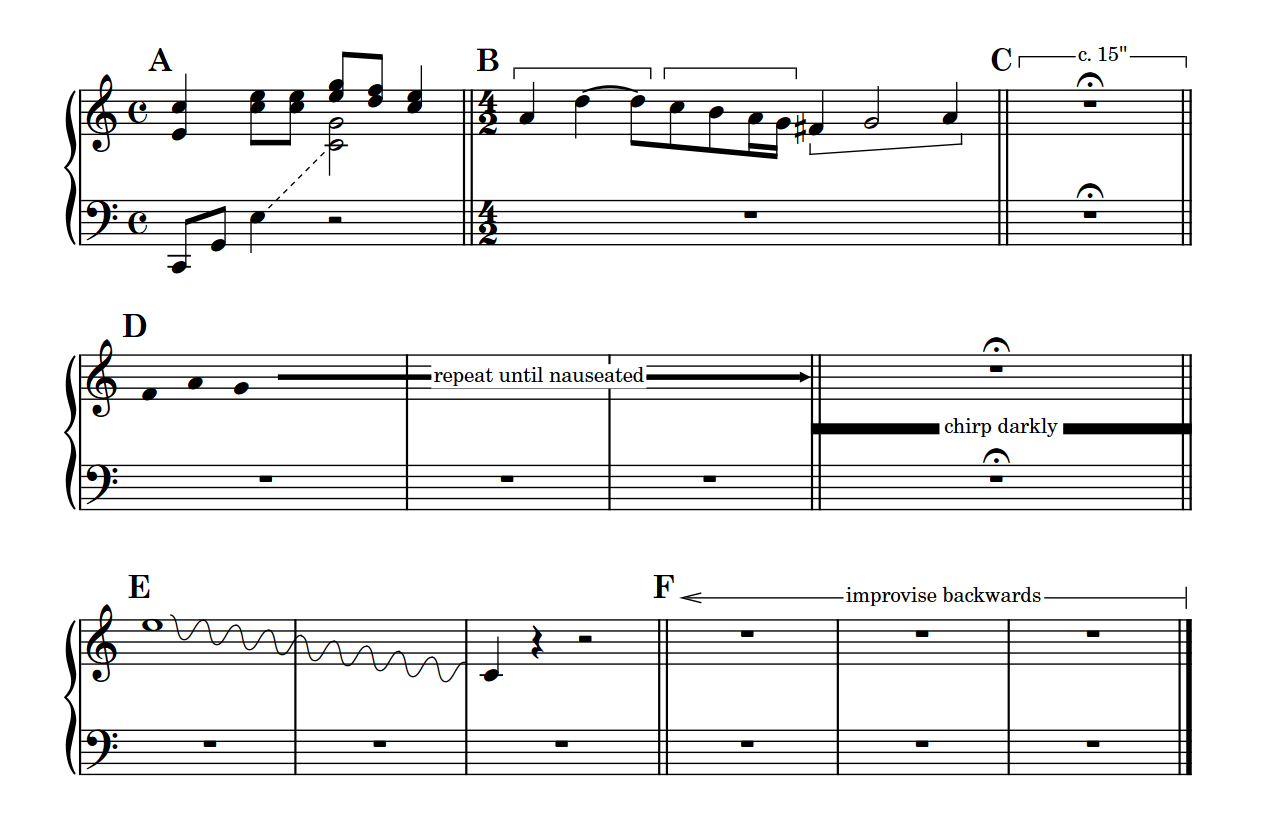 As can be seen above, the tool has many applications. One of the most obvious use cases is a line that connects two noteheads in order to indicate which hand to use in a keyboard passage (A). Such lines will follow the noteheads if you move notes up or down. Using rhythmic positions instead, one can create horizontal brackets for ligatures (B – no more 1:1 tuplets at last). If you require the ligatures to follow the notes up and down however, you will need a trip to Engrave mode as lines that are attached to rhythmic positions are always horizontal by default.

C is an example of a line that connects two barlines, but with a bit of a twist: I’ve held down Alt when I created it so it’s now a system-attached line, which means that it will automatically appear in every part.

Example D shows an arrow that starts at a rhythmic position and extends to a barline. This is a good opportunity to mention the placement options available on horizontal lines: Above, Below, and Inside staff (in this example I’ve chosen Below and dragged it further in Engrave mode).

All sorts of line bodies and cap combinations can be used (E and F) to the user’s taste (and mental sanity).

Dorico starts off with a predefined bank of horizontal lines, vertical lines and end caps. In basic terms, you can stick any predefined cap at the start of any predefined line body, finishing off with another cap. You could also put some text in the middle; either on, above or below the line body. The predefined library is pretty comprehensive: dotted lines, dashed lines, double lines, squiggly lines, wedges, not to mention brackets, arrows and more.

Dorico 3.5 introduced the ability to customize everything about every component of a line. The four line editors (on the Engrave menu) open the door to seemingly infinite possibilities. 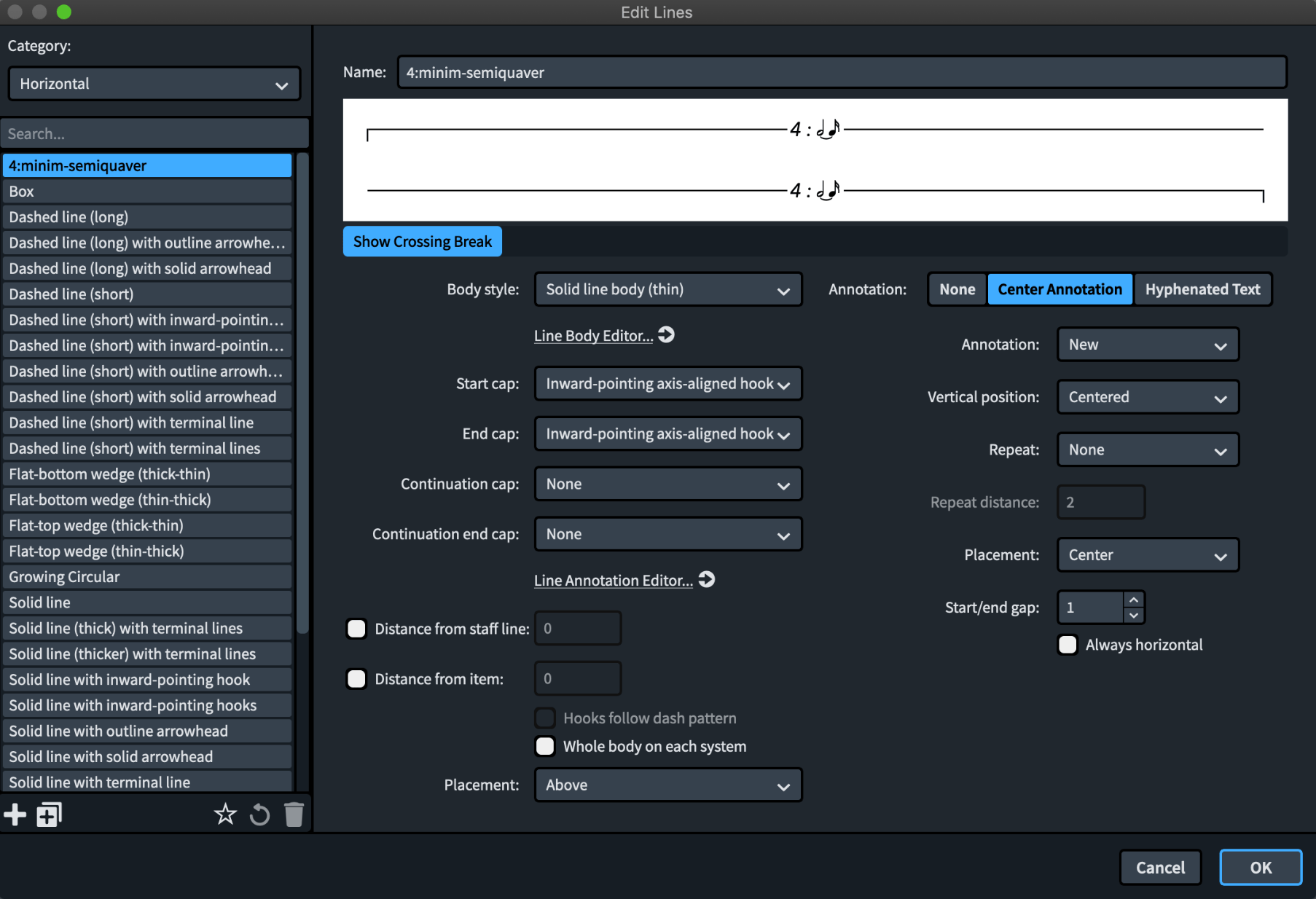 The first, simply called Lines, brings everything together. Tell it which start cap to use, which end cap, which body and, oh, annotations? Annotations can be pretty much anything you like! They can fall at the start, middle or end of the line, or they can repeat throughout, evenly or accelerating/decelerating. If you stick with text, it can be broken into syllables (or in this case, words), split over the course of the line.

By way of a (nonsensical) example of the sort of thing that’s possible:

The other three editors handle customization of each constituent part.

The Line Bodies editor gives exactly the sort of customization you’d expect to dotted, dashed and solid lines and wedges.

Repeatable Symbols are where it gets really exciting, though. 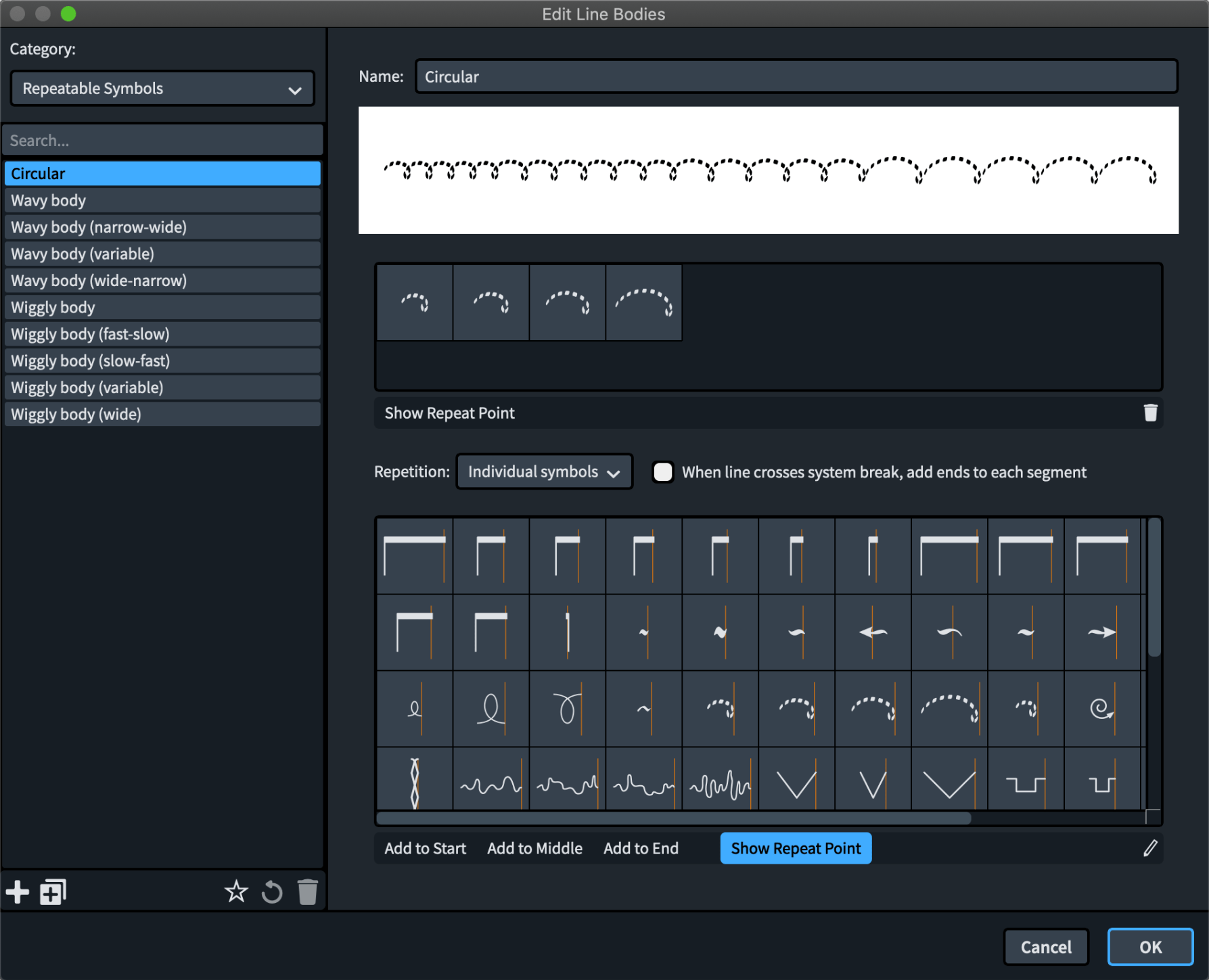 In this section, you can use any number of individual components to build a line body. See those vertical orange lines? Those are the Repeat Points — they tell Dorico exactly where to join repeating symbols together, and of course they’re adjustable, in the Repeatable Symbols editor. This editor gives you further access to another editor, which looks suspiciously like the Edit Music Symbols dialog.

As of Dorico 3.5.10, wedge lines can have an optional Middle Thickness, allowing you to create a single line that proceeds from thin to thick (or vice versa) and back again. 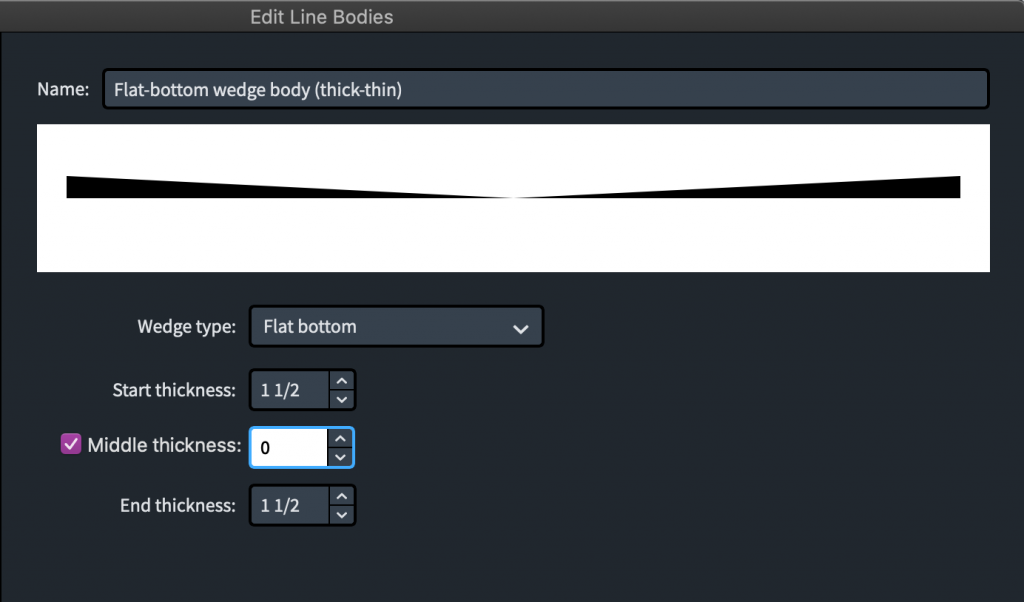 If we have one wish regarding the Lines functionality, it’s the possibility to stretch symbols in just one direction. As things stand, it’s not possible to scale up the X value without scaling up the Y by the same value. It is, however, possible to use anything as a repeatable system, whether it be an individual glyph, a group of glyphs or an imported graphic.

This brings us nicely to the Line Annotations editor, which also houses end caps. Arrows, chevrons, hooks and terminal lines can be edited exactly as you’d expect, given they’re primitives that Dorico draws on demand, and Text options match what you’d expect if you’ve come from one of the other main notation programs.

In this case, it’s the seemingly-dull Music Symbols category that’s interesting. If you’re familiar with the Music Symbols editor we referred to earlier, you’ll know that it’s possible to combine musical glyphs with characters from any font you like, as one “music symbol”. These are dynamic, too — if you tell Dorico to draw text within a music symbol in your “bar numbers” font, for instance, and then change your “bar numbers” font down the line, Dorico will automatically update the music symbol.

Here, for example, is a single custom symbol built into a standard line, saved as default for the next time I’m asked to write this particular sort of tuplet:

It’s really powerful. And, as of Dorico 3.5.10, Text annotations on horizontal lines can now be positioned inside or outside as well as above or below, so they will flip to the other side of the line when it is placed on the opposite side of the staff.

A couple of other details: starts of notehead-attached lines can be aligned with the notehead, the center of the notehead or the left-most accidental, via a new Horizontal start position property. Horizontal lines can now be colored, via the usual Color property.

Portions of this article were included in our comprehensive reviews of Dorico 3.1 and Dorico 3.5. Ben Byram-Wigfield also contributed to this article from the Dorico 3.5.10 review.