There are times when you want your notes to ring out, and for those instances we regularly see the marking “l.v.”, the abbreviation for “let vibrate,” or “laissez vibrer” if you like.

Another way to express this is by adding something that resembles a tie to the end of the note that connects to nothing. Sometimes it feels easy to just add actual ties to the affected notes:

Apart from being rather unsightly depending on the length of the note, you might have playback problems if the tie prevents your program from sending a MIDI note-off message.

Fortunately, there are better ways.

Bob Zawalich’s plug-in Add LV Symbols to Notes is really an ingenious solution. It makes use of the l.v. symbols that come included in Sibelius, but totally automates what would be a time-consuming process of applying them individually. Simply select the passage containing the notes or individual notes themselves, then run the plug-in. 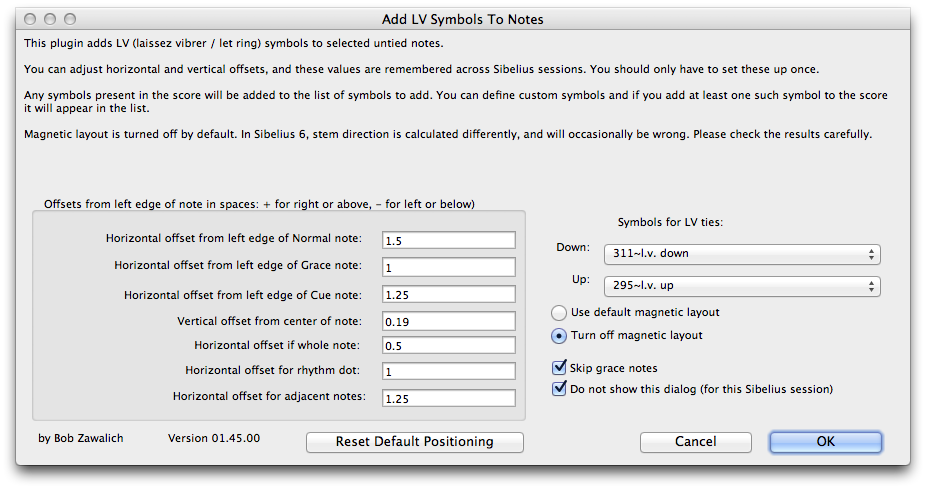 As you can see from the dialog, Bob gives you fine control over your settings, although I have found the defaults to be almost always perfect. It is smart enough to account for positioning in different voices, dotted rhythms, and other complex situations, and will turn off Magnetic Layout for the symbols (which is usually desired).

Without any adjustment needed, I achieved these results by quickly using the plug-in:

The most amazing thing is that Bob recently told me he was working on a project of his own, and, needing to apply l.v. symbols to notes, started applying them by hand. It was only after several times doing so that he remembered he had written this plug-in! I guess that’s what happens when you’re as prolific as Bob.

I forget lots of things, but luckily this valuable tool isn’t one of them. Download it directly in Sibelius 7 or later from File > Plug-ins > Engravers’ Tools. You can also install it manually in 7.5 by visiting the plug-in download page and following the usual manual installation procedure.

I was going to add some other ideas, but in researching some information after nearly finishing this post I stumbled upon Jay Vinai’s excellent guest blog post on this very topic on Robert Puff’s blog. So please check out that post as well for some additional information and explanation.

To my knowledge there isn’t quite such an elegant automated feature in Finale, but you can get some of the way there by creating expressions with default positioning and assigning metatools to the expressions.

First, create new expressions for the l.v. symbols. You can either create them in the Miscellaneous category or define a new category for them. I’m using the Engraver Font Set, 36 pt. Lower-case I is for the l.v. up symbol and Shift-I (upper-case I) is for the l.v. down symbol.

Here are the settings for l.v. up (measurement units in spaces): 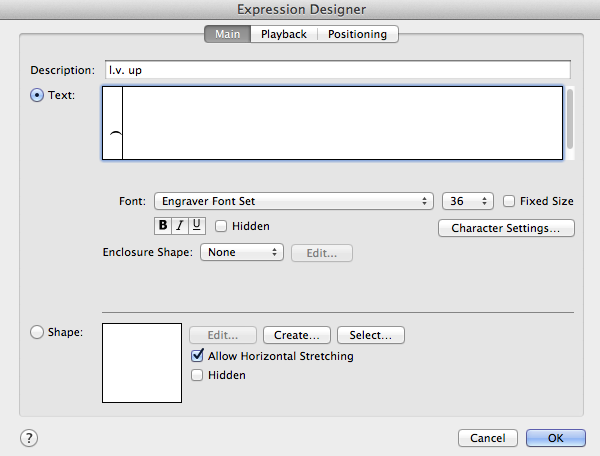 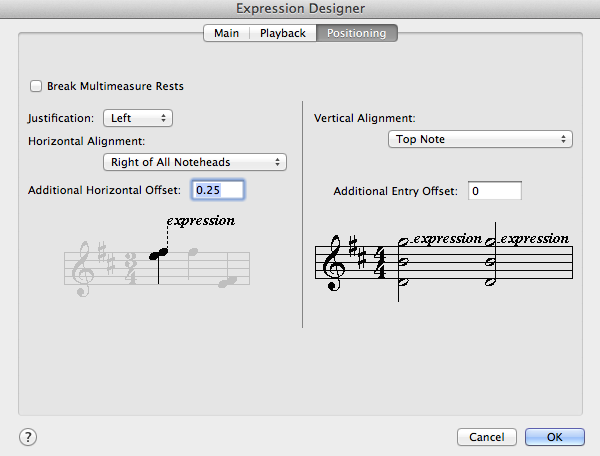 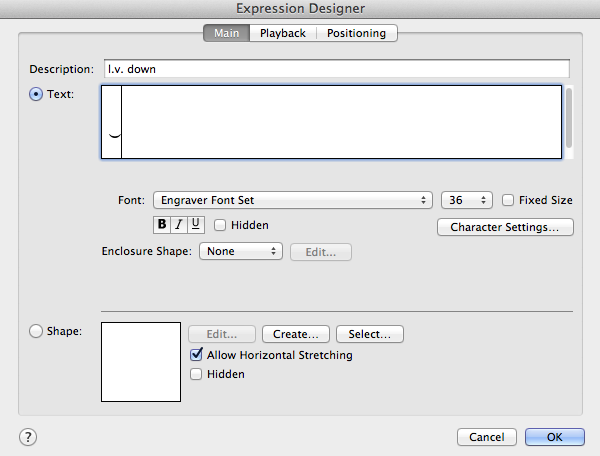 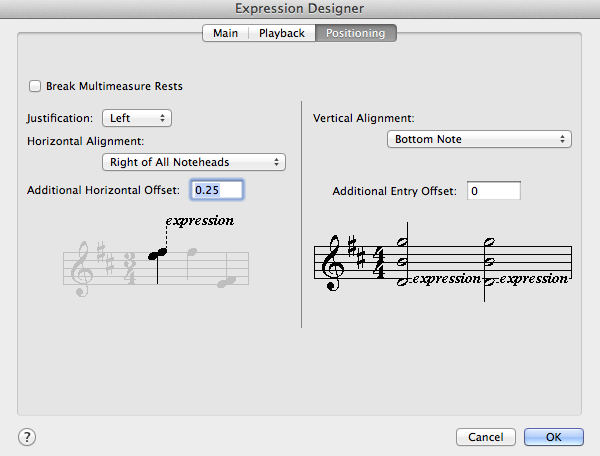 Once you’ve set those up, assign each of these expressions a Metatool for easy access. I’ve set up Q and W but you could use anything you like.

Then, place the expressions into your score. You should find that the default placement is a good starting point, and then you can tweak the positioning as needed. Use the Alt or Option key as needed, as described in this earlier blog post, to constrain the expressions’ attachment points to the notes.

Finally, it’s also worth noting that if you are using the Engraver font as your default music font, and you own the TGTools plug-in suite, there is a Laissez vibrer plug-in in TGTools > Music that automatically swaps out the default notehead with one included in the font that has the l.v. as part of the notehead:

The Convert LV Symbols to LV Ties plug-in replaces LV (laissez vibrer) up and down symbols in Sibelius with native...