Time signatures are easy enough to create in Sibelius, but if you find yourself entering music with constantly alternating meter, even the relatively quick work of pressing T and selecting your desired time signature can get tedious.

If you know what your meter changes are in advance, you’ll want Andrew Moschou‘s handy plug-in Insert Bars with Different Time Signatures. You can insert many consecutive bars with different time signatures in one go by typing out some simple shorthand.

(Note a minor inconsistency: within Sibelius itself, the plug-in is called Insert bars with multiple time signatures, instead of “Insert Bars with Different Time Signatures” as it appears on the plug-in download page.)

New York-based composer Shafer Mahoney has composed an inventive new orchestral piece entitled Echo Variations for the Lamont Symphony Orchestra at the University of Denver, to be premiered in March 2014. Featuring many colorful changes of orchestration and style, Shafer makes use of meter changes quite often in his composition, which he has meticulously sketched out in short score, as shown in this example:

Fortunately, transferring Shafer’s music to Sibelius is made easier with use of the plug-in. To enter the meter changes in this example, one would type:

Insert Bars with Different Time Signatures may be downloaded directly through Sibelius 7 at File > Plug-ins > Install Plug-ins > Other. Users may also install it manually in Sibelius 6 or 7 by visiting the plug-in download page and following the usual manual installation procedure.

Update: The same day this post was published, the industrious Jari Williamsson added a feature to his JW Meter & Rhythm plug-in for Finale, which works in a very similar way: 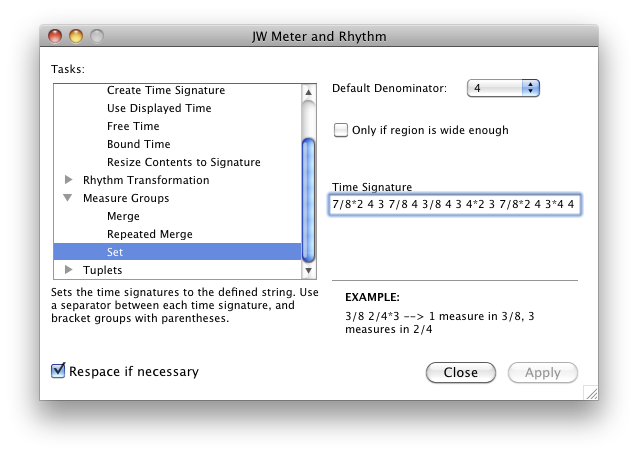 Jari said that a later update to this plug-in will include support for composite time signatures and “a couple of other things.” Bravo, Jari!

Updated December 13, 2013 with the information about the JW Meter & Rhythm plug-in for Finale.

A plug-in creates tuplets in Sibelius that appear to cross barlines. You can specify a tuplet starting position, a tuplet...

In this video tutorial, we’ll cover how to create composite time signatures in Sibelius, including what Elaine Gould’s Behind Bars...

Sibelius is flexible enough that you can re-program common shortcuts to open dialogs instead of galleries, just like in earlier...