Last Thursday I had the pleasure of running a break-out session at the British Dyslexia Association’s first Music Conference, which was held at the Royal Academy of Music. I was invited to speak about how Sibelius could be used by musicians with dyslexia, and over the course of a lively session we discussed a number of ways in which software can play a role in helping overcome some of the challenges these people face. More after the jump.

When changing the size of the music, you may also need to change the distance between staves and systems to make things as clear as possible. The quickest way to do that is to select the whole score (Ctrl+A on Windows or Command–A on Mac), choose Layout > Reset Space Above Staff and Reset Space Below Staff to remove any existing vertical spacing overrides, then choose House Style > Engraving Rules, go to the Staves page, and change the spaces between staves and spaces between systems values.

If you need more help with adjusting layout, see this earlier post.

People with dyslexia sometimes struggle to read black text on a white background, and with music things are no different. So it can be very useful to change the paper texture colour on the Textures page of File > Preferences (in the Sibelius menu on Mac). The consensus in the session was that a cream background was ideal, and in particular the Cream, fine laid paper texture was the favourite.

Coloured markers at the ends of lines

When reading music, moving from one system to the next can be disorientating. (When reading music off the display in Sibelius, you can use View > Panorama to eliminate this problem by viewing the complete score as a single continuous system.)

You could use an arrow line from Create > Line or a box from Create > Symbol as your marker: change its colour using Edit > Color, then copy and paste the marker to the start of the next system. Rinse and repeat.

You can create proportional spacing in Sibelius by editing the values in House Style > Note Spacing Rule. The screenshot below shows some useful values: 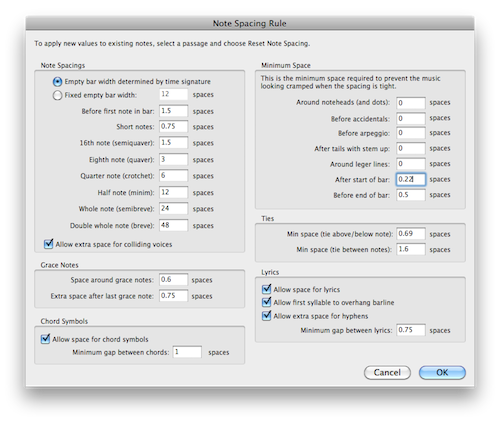 Once you’ve set up these values, select the whole score and choose Layout > Reset Note Spacing.

Remove everything but the notes

Another aid to reading the music more easily is to remove all extraneous markings, such as dynamics, hairpins, slurs, and so on. If you already have some printed music that you’re trying to learn, use PhotoScore (Lite or Ultimate) to scan in the music (but don’t forget not to infringe anybody’s copyright) and send it to Sibelius, or input it from scratch.

Now when you play back, Sibelius will reach the jump to text and then jump back to marker. Use the slider in the Playback window to adjust the tempo to taste.

If you have any questions about dyslexia, contact the British Dyslexia Association for support and help. Thanks to Debbie and the rest of the folks at the BDA for inviting me to speak, and thanks to the delegates for making my session so interactive!

The 34th annual Major Orchestra Librarians’ Association (MOLA) conference will be held in Helsinki, Finland from May 13-16, 2016. I'll...

Katie Wardrobe of Midnight Music is offering a new online course with the goal of make your arranging tasks quicker...