Installing and transferring other music software

Installing Logic was easy. I had Logic Pro 8 and 9 on my old Mac, but I don’t have many custom settings or 32-bit plug-ins, and I had heard enough good things about Logic Pro X that I was willing to leave the previous versions behind. Should you not wish to make a clean break, it is entirely possible for Logic Pro X to coexist with your previous version.

Since I hadn’t bought it yet (Logic Pro X isn’t compatible with Snow Leopard), I headed over to the App Store. $200 and 50 GB later, Logic was installed on my new Mac.

I chose to install the legacy instruments and content. I also opted to “Show Advanced Tools” in Logic > Preferences > Advanced; it seems silly to have a powerful program like Logic not display these options. (If you’re upgrading and already have Logic 9 on your Mac, “Show Advanced Tools” should already be checked.) 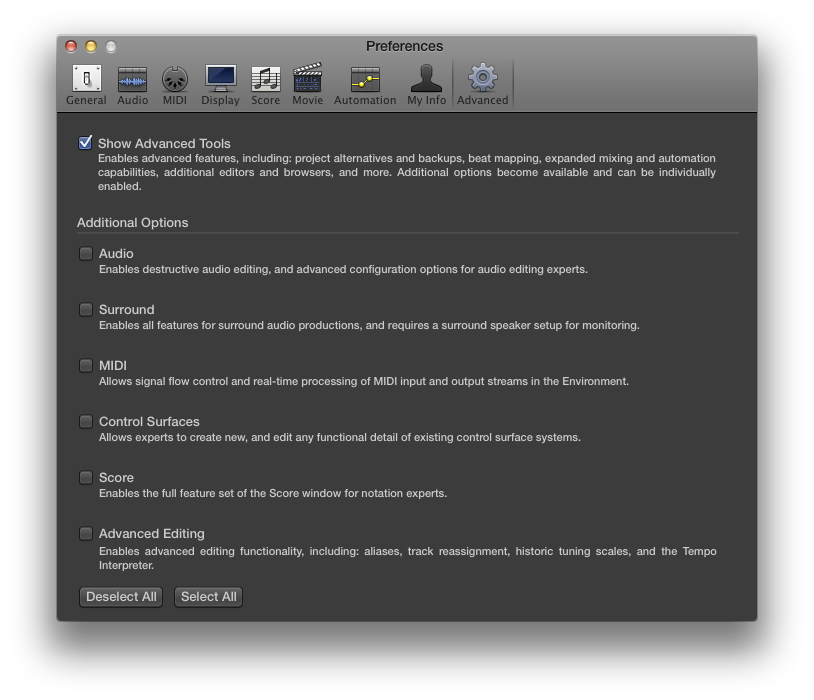 I have the Special Edition of the Vienna Symphonic Library, volumes 1 and 2. The instruments themselves existed on my samples drive in my old Mac, and I simply transferred the entire folder named 100 SpecialEdition and its 57 GB of contents over to the new Mac via Ethernet, on the external drive I had designated for my samples.

VSL uses a USB key dongle authorization, so I unplugged the key from my old Mac and plugged in the new Mac. I then went to the site for the eLicenser Control Center, downloaded the latest version of the application, and installed it on my new Mac. I opened the application just to make sure the VSL registrations appeared, and then quit the program.

I then went to the download area for Vienna Instruments and Vienna Ensemble. Once logged in, I saw links to download the latest software, which I did, and installed it.

After installing the Vienna software on my Mac, I went to Macintosh HD/Applications/Vienna Ensemble and opened the Directory Manager. I told it where to find my sample libraries, and that was that.

I have EWQLSO Gold, Symphonic Choirs, and Stormdrum. Like the VSL instruments, I transferred over their three folders from my old Mac to the new (about 145 GB).

Each of these libraries uses the PLAY player, and each license is authorized to an iLok key, purchased separately. I had already set this up when I first installed the libraries on my old Mac, so in this case, I didn’t need to download any software. I just unplugged the iLok Key from the old Mac and put it in the new Mac. More information is at this EastWest knowledgebase article.

I then went to the PLAY Software update page and downloaded and installed the latest PLAY software. Once installed and downloaded, I opened PLAY and went to the “Browser” window. From there, in the “Favorites” section I added each of the libraries, as instructed in this article.

The XSample solo libraries have some very nice sounds and effects. As with the previous sample libraries, I simply transferred its folder and 15 GB of sounds from my old Mac to the new.

XSample uses the Kontakt Player (more on that below).

I have Kontakt but hardly use it – I skipped installing it on my new Mac. If I need it at some point, I’ll install it. For now, I just downloaded the Kontakt 5 player and installed it.

I opened Kontakt Player and added to it my XSample library, as described in this article on Native Instruments’ site. I clicked “Activate” and entered my serial number, and I was ready to use XSample.

Wallander Instruments’ NotePerformer for Sibelius is a relatively new product that I enjoy using, with excellent results, for bigger orchestra projects in Sibelius that don’t call for a lot of time-consuming custom setup.

Installing NotePerformer is incredibly easy. I went to the product update page, requested a download link, received the link in my e-mail, downloaded NotePerformer, and installed the software on my new Mac.

I have a USB MidiSport 2×2 that is about 15 years old. I use it to connect my Mac to my equally old Roland RD-600 keyboard. M-Audio drivers are found here.

Mine works fine, but if you have one of these gadgets and are having problems getting it to work, this Apple support article might help.

For daily note entry and editing I use a discontinued M-Audio O2 USB MIDI controller, which is basically the same product as the M-Audio Session Keystudio 25

, which has also been discontinued. I like its size and slimness, and I haven’t yet found any current product I like as much for the way I use it. It’s class-compliant, so no drivers were necessary.

To be sure I had the latest version of ReWire, I downloaded it from Propellerhead.

Nearly a month ago, Apple released the Mac OS X 10.6.7 operating system update, and (unusually) the update introduced a...

Update –- 26 April 2011 Apple have released a fix for this problem, which is available now from Software Update....