Much of the time, Sibelius’s default note spacing — the distance between each note and beat after accounting for accidentals, multiple voices, lyrics, and the like — is just fine. There are times, however, where you may wish to adjust what you see.

The first thing to try is to reset the note spacing by selecting a passage and choosing Appearance > Reset Notes > Reset Note Spacing, or use the shortcut Cmd-Shift-N on Mac or Ctrl+Shift+N on PC. Although Sibelius usually recalculates note spacing on the fly as you work on your music, it doesn’t always take everything into account. Resetting note spacing is a good, quick way of cleaning up any apparent collisions.

Keep in mind that if your layout — meaning the staves and systems on a page — is locked in any way, resetting note spacing will not affect the layout, and thus your collisions will persist if there is simply no way to space the music adequately within the locked layout. Unlock the affected measures by selecting them and choosing Layout > Format > Unlock Format (shortcut Cmd-Shift-U on Mac or Ctrl+Shift-U on PC).

Sibelius spaces the music according to the settings found in Appearance > House Style > Note Spacing Rule. This takes into account the complex sets of relationships among different durations of notes. Section 8.3 Note spacing of the Reference explains this further.

You can adjust these settings manually, if you like. Any adjustments you make will take effect after you reset note spacing, as described above.

But it’s probably a better idea to use Bob Zawalich’s Note Spacing plug-in, for Sibelius 7.1.3 and later, to make these adjustments. In addition to Bob, some of my most knowledgeable colleagues were involved with developing this plug-in, like Neil Sands, Robert Puff, Bill Holab, and Daniel Spreadbury.

The plug-in allows you to apply a note spacing preset as a set of predefined Note Spacing Rules to your music (somewhat similar to using note spacing libraries in Finale). You can optionally scale those values by a percentage.

What’s more, you can choose to run this on a passage-by-passage basis, while leaving your master Note Spacing Rule intact. You can, of course, apply the preset as your score default as well. 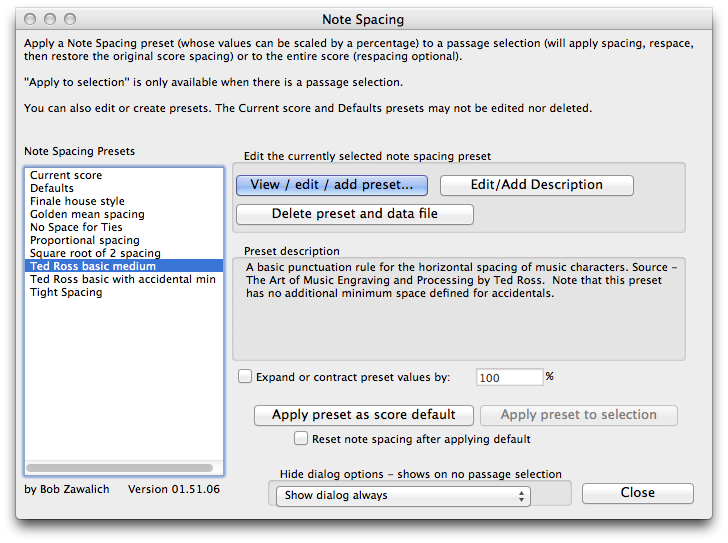 . Reading Bob’s documentation, included with the plug-in, is recommended.

Note Spacing may be downloaded directly through Sibelius 7 or 7.5 at File > Plug-ins > Install Plug-ins > Engravers’ Tools. Users may also install it manually in Sibelius 7 or 7.5 by visiting the plug-in download page and following the usual manual installation procedure.

The plug-in is terrific, but sometimes you just need to move a beat to the left of right without fussing about further. In Sibelius, that’s easy enough: Simply select any note or rest and drag it left or right with the mouse. Notice how the entire beat in your score stays aligned, with all the music on that beat moving as well. You can also accomplish the same thing by using the keyboard: Shift-Option-Left/Right Arrow on Mac or Shift+Alt+Left/Right Arrow on PC. Add Cmd (Mac) or Ctrl (PC) to this shortcut to move the beat in bigger increments.

A passage of music can be respaced in a similar way. Make a passage selection and use the same keyboard shortcuts. You’ll find that the music squishes together or spreads out proportionally:

If you need to manually adjust the width of a completely empty bar or of a multirest, simply click and drag its right barline to the left or right.

Adjust via the Inspector

As mentioned, the method above works on an entire beat. What if you want to adjust the position of a single note, effectively offsetting its position relative to the rest of the beat? Positioning notes in complex voicings can be tricky (and in fact it was one of the subjects Daniel Spreadbury covered in his most recent blog post).

To fine-tune the placement of a note, select it, then open the Home > Inspector (shortcut Cmd-Shift-I on Mac or Ctrl-Shift-I on PC). Once open, alter the note’s X parameter to adjust its horizontal offset. 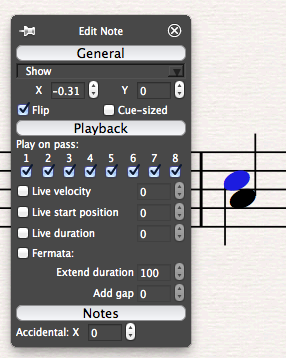 Sibelius does many things very well, but there is a curious situation in which Sibelius stubbornly leaves too much space in bars that contain one or more clef changes. Until or unless this problem is fixed in a future upgrade, Bob Zawalich comes to the rescue once again with his plug-in Respace Clef Change, which you can read about elsewhere on this blog.

The first Dorico maintentance update is full of new features and bug fixes covering all areas of the program. Notable...