In Sibelius, there is some built-in support for harp notation and playback. At a basic level, you can manually enter text in a special format, and there are some plug-ins that ship with Sibelius that automate common tasks. But there’s also a wide range of additional tools in the form of downloadable plug-ins, fonts, and other resources, that you’ll want to take advantage of if you find yourself working with harp music regularly in your Sibelius scores.

The classic shipping pedal harp plug-in for Sibelius is Neil Sands’s Add Harp Pedaling, which by default is found in Home > Plug-ins > Other. It generates harp pedal diagrams from the notes in the selection. There is an updated version of this on the plug-in download page in the Harp category, which can be used for Sibelius 6.1 and 6.2. For Sibelius 7 and later, just use the version of this plug-in that ships with Sibelius. 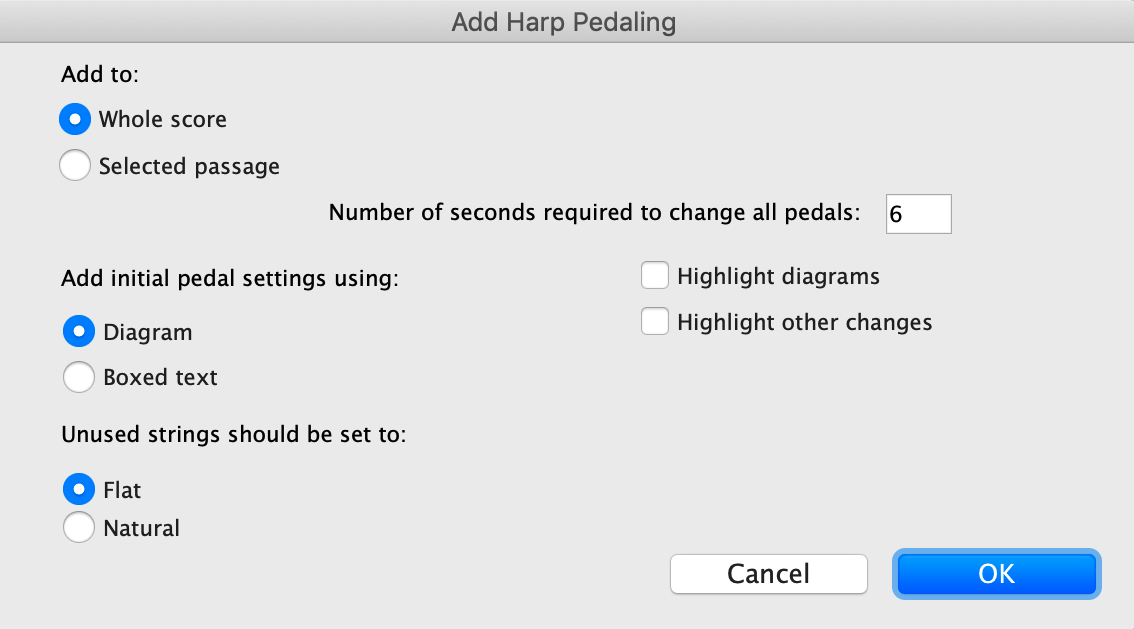 Neil also wrote Check Harp Pedaling, found in Review > Plug-ins > Proof-reading, which writes warnings in the score if any notes in the selected passage are unplayable on a harp with the pedal configuration specified in the dialog.

The Harp category of downloadable plug-ins will be useful to composers and arrangers who work with pedal harp, as well as for harpists. Read on to learn more about those.

Harp Arpeggio, by Ian Cugley, uses Live Playback data to play harp arpeggios even across multiple staves. It is designed specifically for playback of arpeggios on the harp but may be used on other instruments, like piano. The speed of the arpeggio (delay between notes) can be set in the plug-in dialog.

Harp Gliss, by Ian Cugley, generates MIDI messages to play back a glissando between two pitches, based on an input harp tuning.

Harp Gliss Playback, by Bob Zawalich, is rewrite and enhancement of Ian’s Harp Gliss plugin. In addition to the playback, it can write out a harp pedal diagram, and/or tuning text describing the tuning. Like Harp Gliss, you can select 2 notes and have the plugin generate MIDI messages for that gliss from a typed-in tuning. It is also capable of calculating the tuning based on key signatures, notes, and tuning indications, and can process multiple glissando lines at one time, but only for non-magnetic gliss lines.

Harp Gliss From Pedal Diagram, by Bob Zawalich, is a front end for Ian’s Harp Gliss plug-in, which must be installed before this plug-in is run. It looks for any harp pedal diagrams or tuning text that come before the notes selected for a harp gliss, and calls Harp Gliss with the tuning string already set up based on the diagrams or tunings.

These were all written by Bob Zawalich.

Alternate Harp Pedaling allows you to type in some pitch names, and will generate a list of all the harp pedal settings that include those pitches. The plug-in will allow you to specify the order of the pitches in the pedaling, and produces, in an edit box, text that can be pasted into a text item in a Sibelius score to show both the pedaling as pitches and as a harp pedal diagram.

Change Text Accidental Size changes the size of an accidental within a piece of text, such as C#. This can be useful for increasing the size of the accidentals in pedal change text created by the Add Harp Pedaling plug-in, among others. By default it will only look at text with a font change and will skip chord symbol text.

Color Harp Strings colors all harp F/F#/Fb notes blue and C/C#/Cb notes red. All harps color their “C” strings red and the “F” strings blue or black, so coloring the written notes is sometimes used for introductory harp music.  As of Sibelius 8.3, individual notes in chords can be colored separately. Prior to that, if any note in a chord were colored, all notes in the chord would be colored the same color, so this plug-in could not be used to color notes in chords.

Filter Harp Pedal Diagrams filters any selected pedal diagrams. The diagrams must be of the type generated by Add Harp Pedaling, and use the special LMNO characters of the Opus Text/Inkpen2 Text/Helsinki Text/Reprise Text fonts.

Harp Gliss Pitches generates pitches to set the pedals of a harp for glissandos given the root and type of a scale or chord. This can be especially useful for jazz scores where only a chord name is specified. It lists a number of possible scale types and chord types. You can also define your own scales of seven pitches or fewer. For chords, you may type in any chord type name that Sibelius 6 or higher will recognize. The plug-in determines which pitches are available in the scale or chord, then tries to fill in any missing pitches so that all seven pedals are specified. The plug-in will find all combinations of pedals that contain all the originally specified pitches. 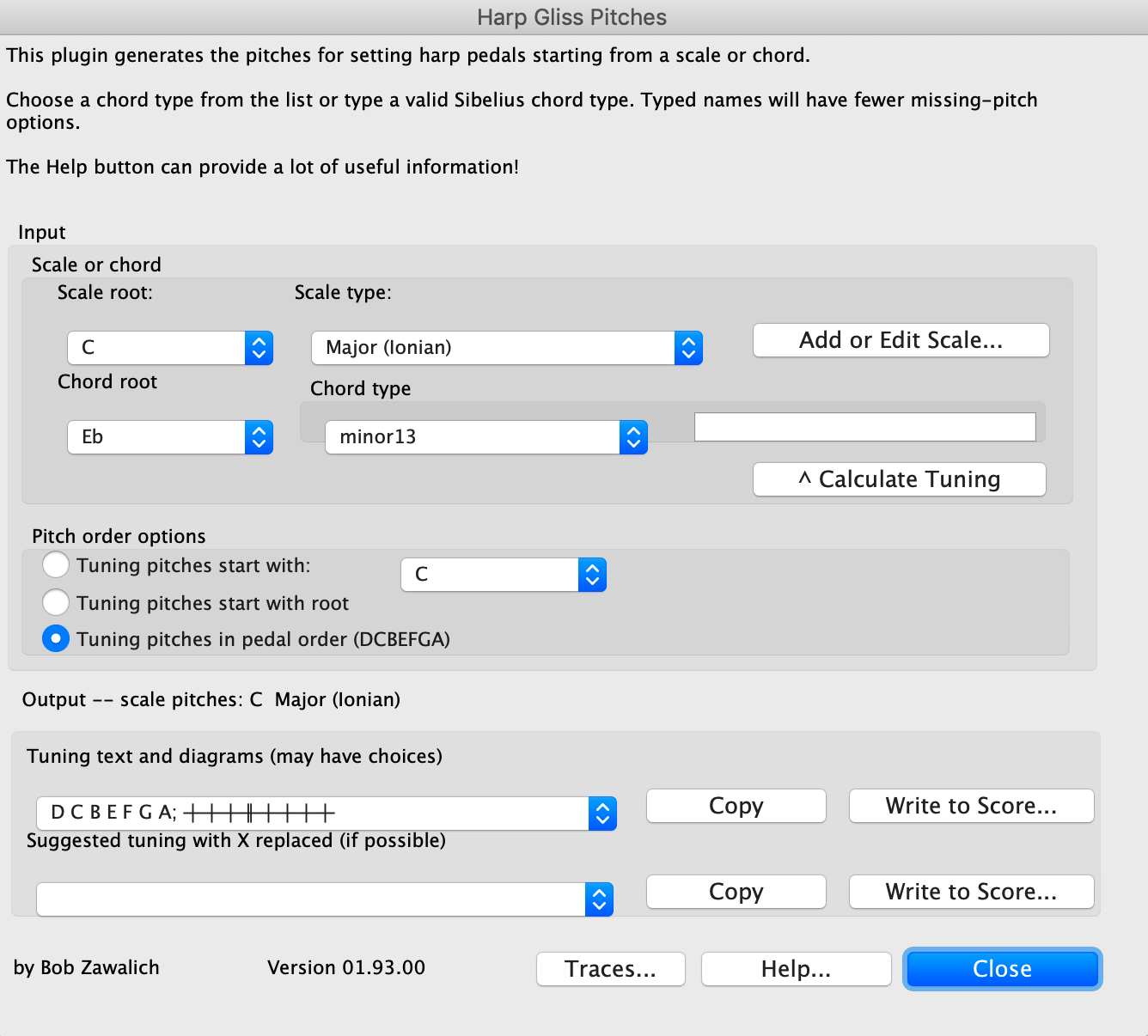 Harp Diagram From Tuning produces a harp pedaling diagram from a list of 7 pitches that you type in.

Harp Gliss and Octave Notes will create a gliss line, preceded by an octave of cue-sized notes, based on the harp tuning, between 2 selected notes.

The Harp plug-ins may be downloaded directly through Sibelius 7 or 7.5 at File > Plug-ins > Install Plug-ins > Harp. Users may also install these manually in Sibelius 6, 7 or 7.5 by visiting the plug-in download page and following the usual manual installation procedure, or by using the Install New Plug-in plug-in.

Other harp-specific materials by Bob Zawalich

Bob has written a PDF Document, Notating Music for the Harp in Sibelius, which describes techniques for effectively producing notation in Sibelius for the pedal and lever harps. It describes how to use the font Norfolk Harp Std, which provides access to a number of pedal harp-specific symbols, including many of the symbols used by Salzedo. You can download Norfolk Harp Std, which is included in the Norfolk fonts set, available from NYC Music Services, here.

Bob has also produced a set of Sibelius scores, in Sibelius 7 format, which provide examples and instructions for producing the notation elements used in the Special Effects chapter of The Composer’s Guide to Writing Well for The Modern Harp by Yolanda Kondonassis. The examples should be useful for reproducing notational elements often used in pedal harp music.

You can find and download these scores and documents here.

In Sibelius, harp notation text objects are created in a variety of text styles and often contain a mixture of...

Harp pedal diagrams may look forbidding, but you can learn how to read them and place them in your score...

Learn how to get harp notation that is pleasant to both the eye and ear by using several convenient plug-ins,...