This blog post is written by Bob Zawalich, composer, guitarist, software designer, and creator of hundreds of useful plug-ins for Sibelius. In this post, Bob shows us how to get harp notation that is pleasant to both the eye and ear by using several convenient plug-ins.

Lines in Sibelius are defined for one staff only. You can drag a line to cover both staves, but playback will not work properly. I will first describe how to get the notation to look correct, and then how to get playback to match the notation.

If you want a gliss. line to cover both staves, select the start and end notes and create the line. It will be drawn straight on the first staff, and the ends may be far from either notehead. Now click on the end(s) of the line that need to move to get a small handle, and drag the handle to the note – the up and down arrow keys will actually do a great job for this. You will usually find that you will not need to adjust the horizontal spacing at all.

The downloadable Line Between Notes plug-in (in category Lines) will make this easier. You can select two notes and run the plug-in and it positions the line as close to the notes as it can. The plug-in has to guess the distance between staves, so it will not always end at the right height, but the line will always require less adjustment than when you add the line by hand.

See Philip’s blog post for more information about this plug-in.

Prior to Sibelius 6, arpeggios always came from the Lines gallery. You can still get them there, but it is now much easier to use note-attached arpeggios which are available from the 5th keypad layout. They are easier to position than lines, match the height of the chord, and stay attached to the chord even if it moves. 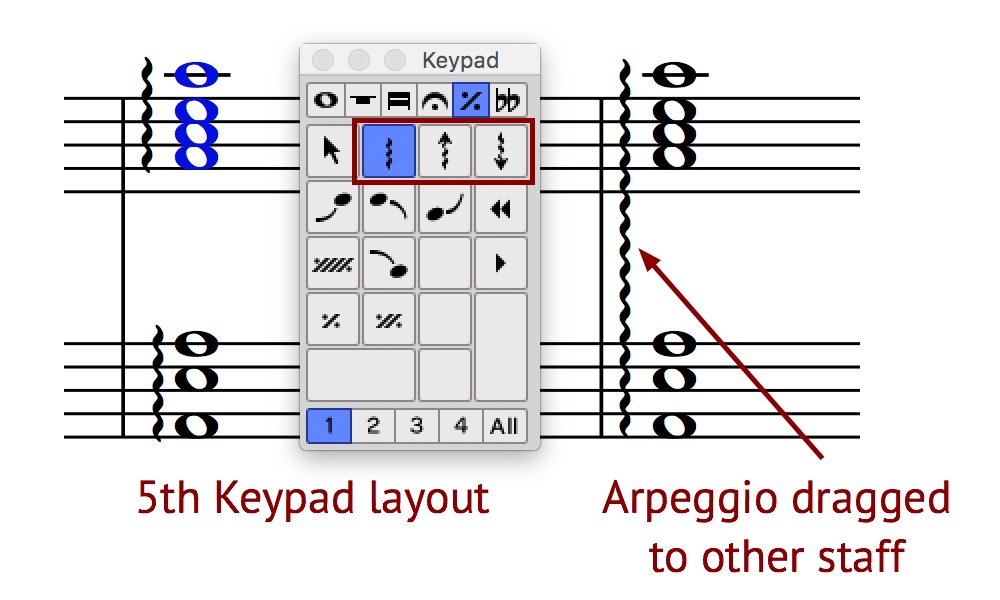 If you select notes on two staves when adding an arpeggio, you will find you create two arpeggios — one on each staff — and each chord will start playing back at the same time. Instead, select just one staff, and after the arpeggio is created, drag the end to the other staff. Arpeggios will play back (the plain and up-arrow arpeggios play upward, the down-arrow plays downward), but only on one staff.

If you’ve opened a file created in Sibelius 5 or earlier, or if you just didn’t know about this method of creating arpeggios and created them as lines, you can use the plug-in Replace Arpeggio Lines to convert them to note-attached arpeggios.

If you want to get both staves to play back you will need to use a plug-in.

The “instrument default” playback of a gliss. line in a harp instrument is White notes. This is set in Home > Instruments > Edit Instruments, and the available options are as follows:

White notes plays a C major scale and Black notes plays a “black keys on the piano” pentatonic scale, regardless of the key of the piece. These settings might work on a piano (or a cross-strung harp), but they are not very useful for most harps. Unless you are in the key of C or A minor, the playback will always be wrong for harp glissandos! Also, gliss. lines that cross staves or gliss. lines for notes that are not adjacent do not play back at all in Sibelius.

To get around this, you can download and run the Harp Gliss Playback plug-in from category Harp. 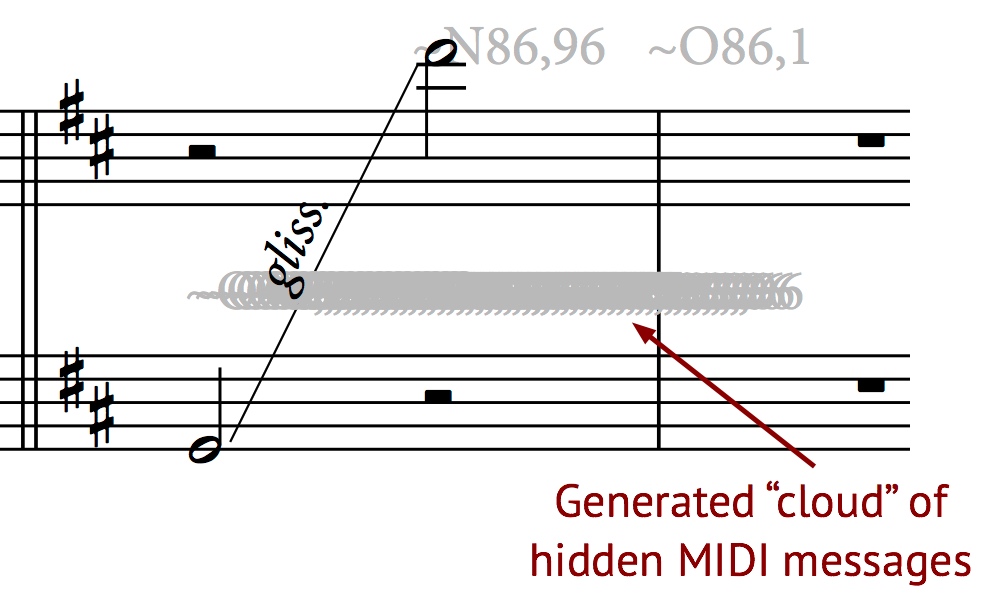 The plug-in dialog can be a bit intimidating, but try it with the defaults after selecting the notes for which you want to get playback, and it will most likely do what you want. The PDF file included with the plug-in explains the options. 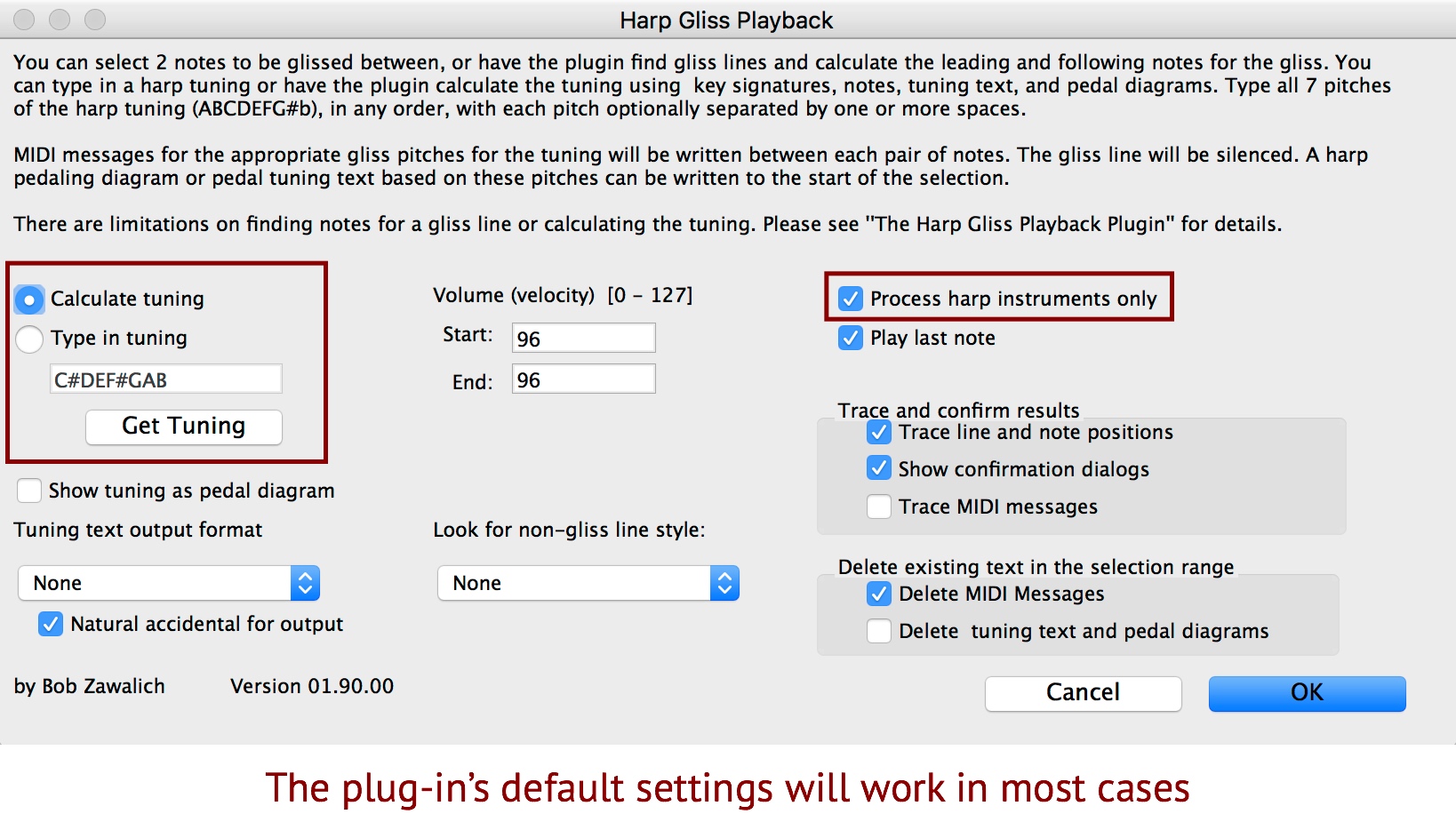 Selecting the entire score will only work if the notes glissed between are adjacent rhythmically, but you can also select any two notes and the plug-in will generate the gliss. messages between those notes.

Wait until the notes are well determined before running the plug-in because the messages will not adjust if the notes change. You can run the plug-in again, though, and by default it will delete the previous MIDI messages. The hidden messages will not print, and you can turn off View > Invisibles > Hidden Objects and you will not see the gray “cloud”.

You can use the downloadable plug-in Trace MIDI Messages (in category Text) to see exactly which messages have been written.

If you use note-attached arpeggios from the 4th keypad layout, they will play back if the notes are all on one staff. You can drag the arpeggio from one staff to an adjacent staff, so it will look right, but the notes in the dragged-to staff will not play any differently.

Arpeggio lines of either type have three playback problems:

You will have to select the notes and run the plug-in on each chord you want to play back correctly.

This plug-in adjusts the Play > Live Playback > Live start positions of each note to start a little later. You can adjust the gap between notes. The default (8), which is equivalent to starting each note a 128th note apart, works well in most cases. 16 units gives a bit more time spread, though. Listen to the results and see what you like best. 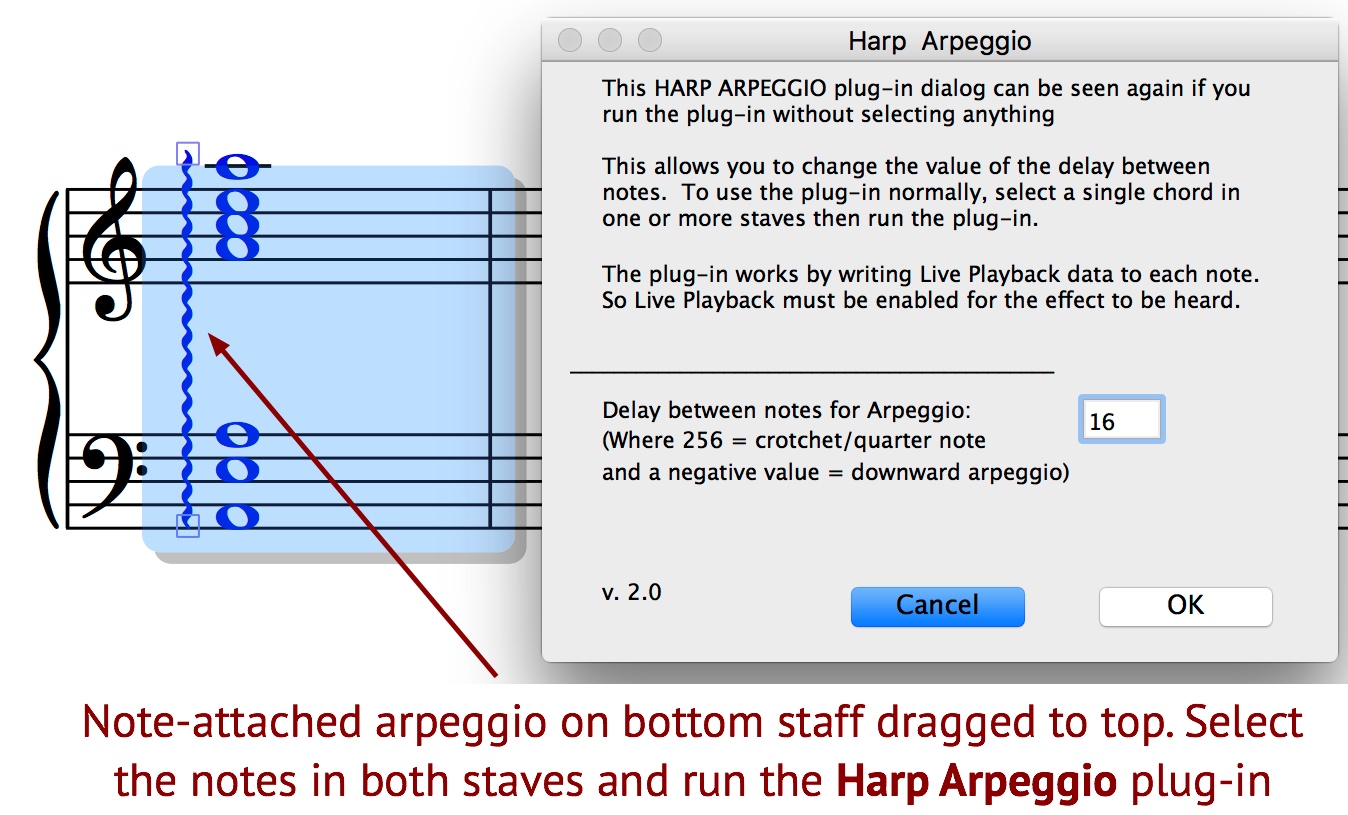 Sibelius's magnetic glissandi automatically snap to notes. What's more, you can change the playback style of a glissando or disable...