Update: Bob Zawalich has created a plug-in called Create Trailing Pseudo-Grace Notes to automate the process described in this post.

It is not unusual to encounter grace notes at the end of a bar — that is, before the barline — in certain editions of music, like in the pickup to the first bar of the Toreador Song from Bizet’s opera Carmen: 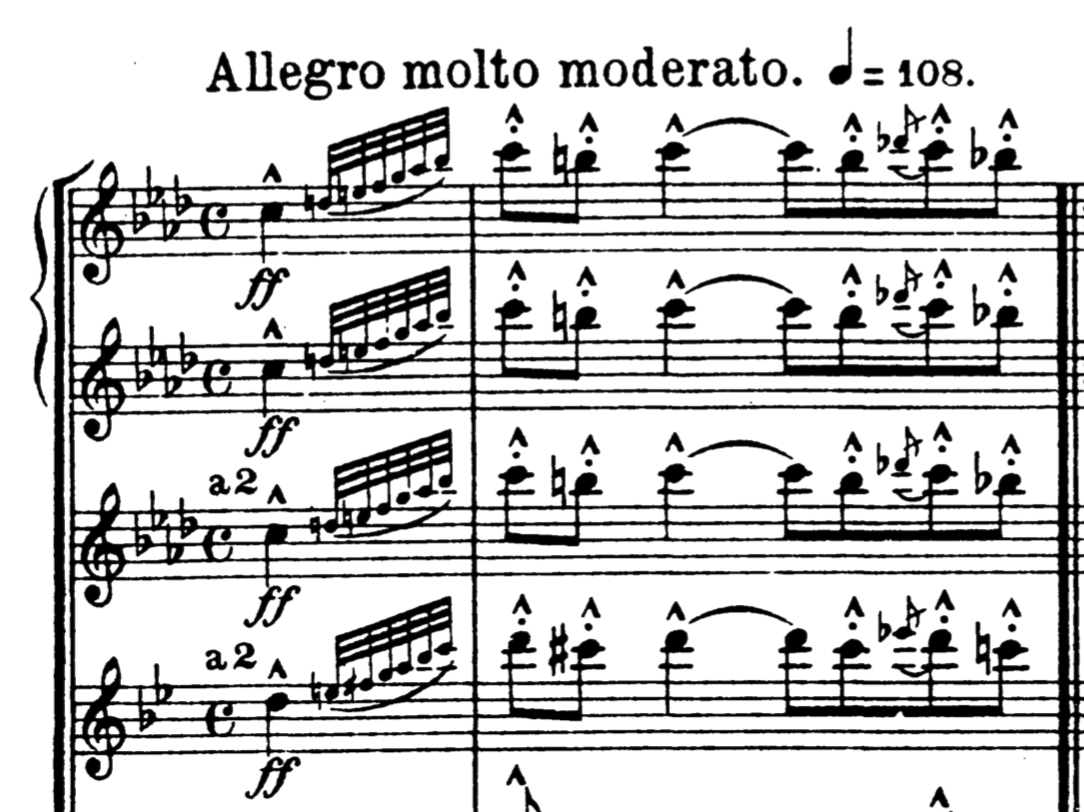 Entering this variety of grace note in Sibelius is a chore, to say the very least. Don’t take my word for it; the Avid Knowledge Base article on the subject begins with: “It is difficult to insert a grace-note if it is not followed by a note or rest. The problem here is that grace-notes attach to the following note/rest, so if the grace-note is, for example, at the very end of a system, then there’s nothing for it to attach to.”

Blecch. There are other workarounds, such as one that places the grace notes in another voice, but each of them have their own caveats and limitations.

Create grace notes at the end of a bar using tuplets

In thinking about this “ungraceful” problem I’ve uncovered yet another approach which involves using tuplets to place the grace notes at the end of the bar. It is indeed another workaround, but I’ve found it to be useful (albeit with its own caveats).

(Oh yes, doing this in other software is much easier, I know. I’ll cover that at the end of this post.)

Let’s look at our example again.

Determine how many grace notes are needed, and their duration

Be warned: some simple math is involved here. Let’s first determine the number of grace notes needed and call it “G”. Here, I need 6 grace notes, so G=6.

I also need to know the “duration” of each grace note. Here, they are 32nd notes. This comes in handy in the next step! 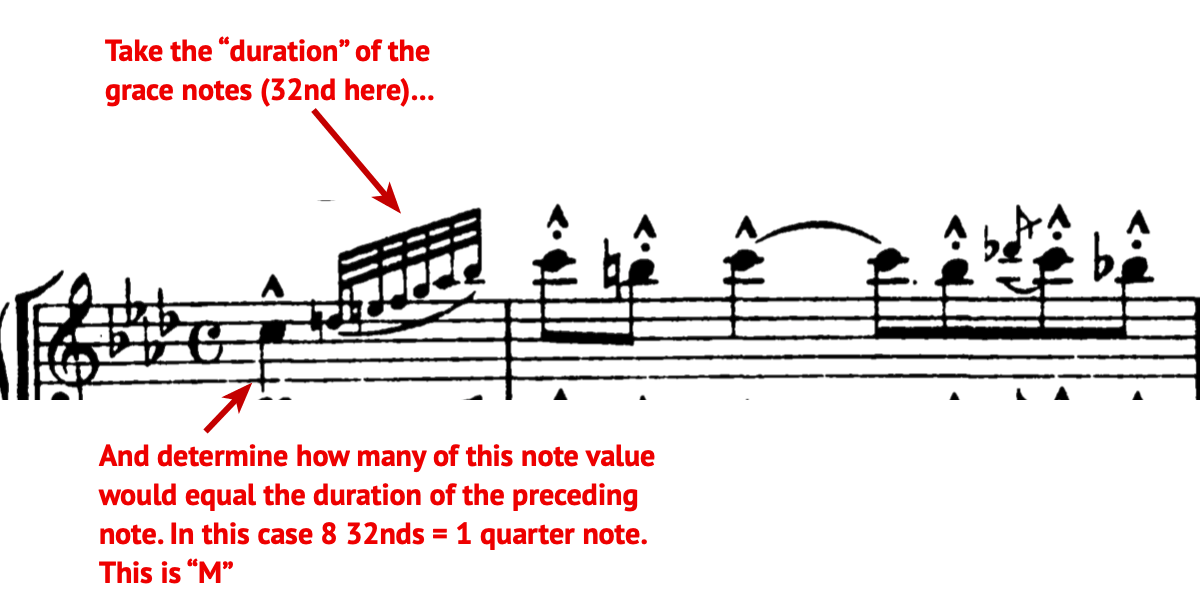 This is done easily enough by entering a 32nd note or rest and going to Note Input > Note Input > Triplets > Other and creating a 14:8 tuplet. 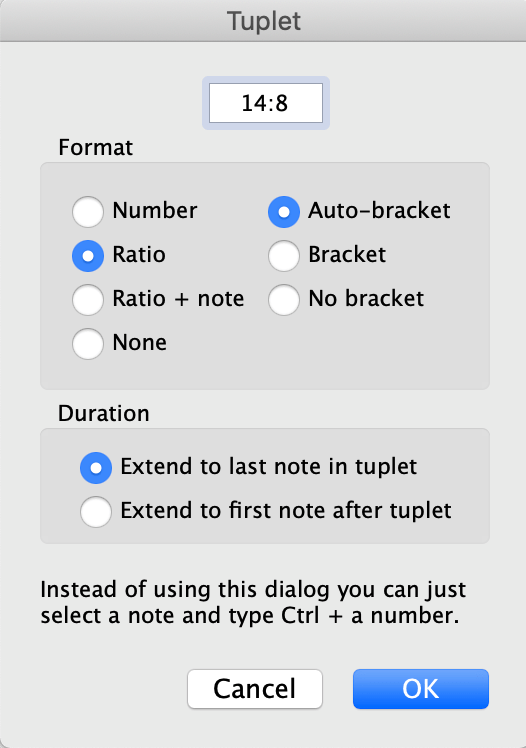 (You could also use the plug-in Create N by M Tuplet.)

Once you’re confident in this approach you can select None and No bracket, but I’ll display these items for the time being to illustrate what’s happening.

Enter the notes and tidy up

Now, enter in all of the notes as if they were all regular notes, not grace notes.

Make the “grace notes” cue-size notes by going to the second Keypad layout and choosing the cue note toggle. 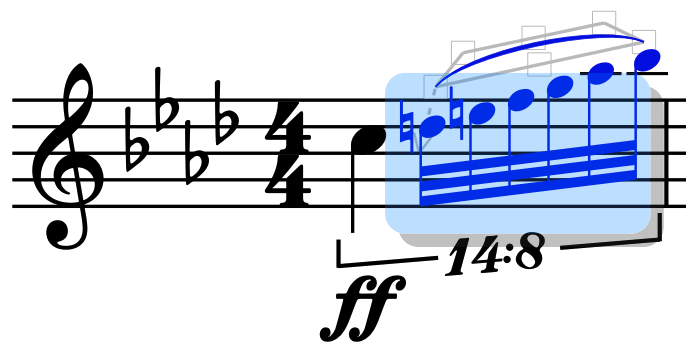 Benefits to this approach

This is actually a true representation of what happens musically. By playing grace notes, you take away value from the preceding note. The tuplet is a mathematically correct way of showing the relationship of the notes.

For this reason, the music should generally space correctly, both in a single part and in relation to other instruments. Playback should also be reasonably accurate.

There is no need to fiddle with custom positions in the Inspector or use another voice.

Here are a couple of other examples which worked well. For reference, you can see the hidden tuplet:

Drawbacks to this approach

These are not “real” grace notes, so you can’t filter for them in Home > Filters > Grace Notes.

In Appearance > Engraving Rules > Notes and Tremolos, you have to set the values for Grace note size and Cue note size to be the same percentage, or at least reasonably close to each other.

Slashed single notes are not possible with this method, unless you manually fake it by placing a line or symbol.

I haven’t extensively tried every possible combination of tuplet ratios, so there may be some situations where it doesn’t work as well. In addition, if your music is spaced unconventionally, you may get unsatisfactory results.

As mentioned earlier, this is easier in other software.

In Finale, first enter the grace notes as regular notes in Speedy Entry and disable, at least temporarily, Jump to Next Measure and Check for Extra Notes in the Speedy menu. Then convert the regular notes to grace notes using the usual semicolon (;) shortcut.

In Dorico, select the grace notes whose position relative to barlines you want to change. You can do this in Write mode and Engrave mode. Then, in the Properties panel, activate Grace note before barline in the Grace Notes group. 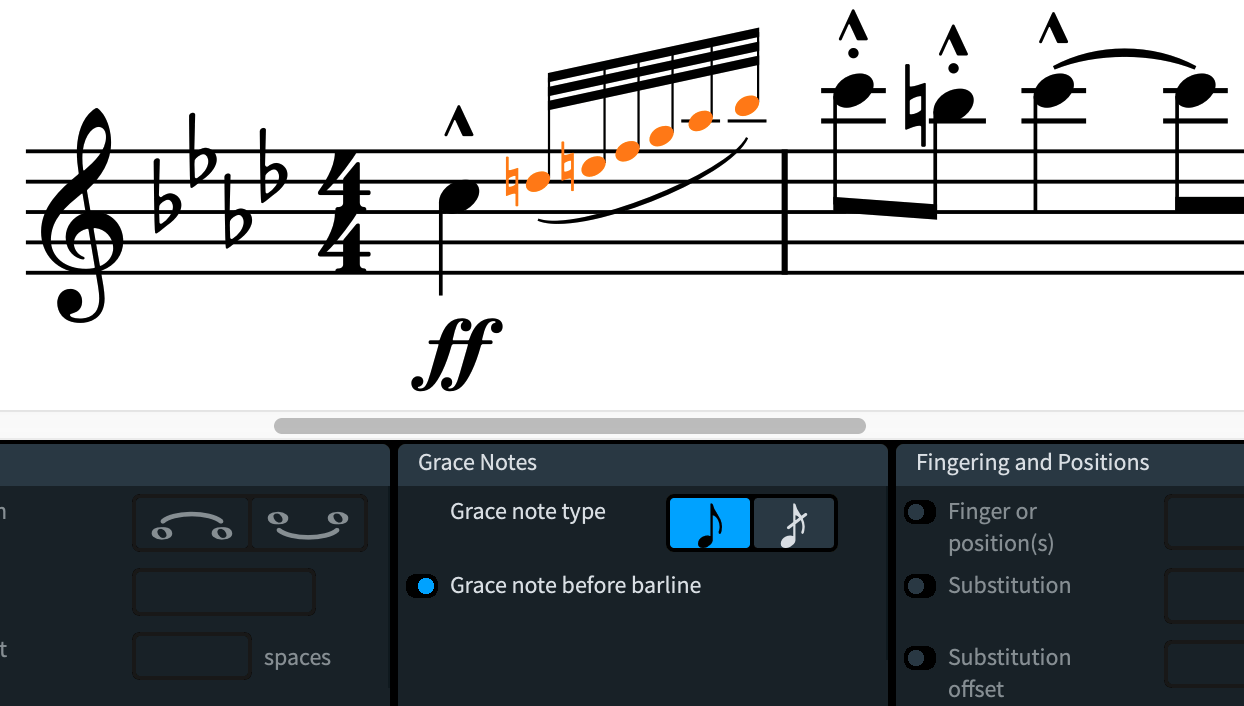 Have you gracefully applied this notation in your scores? Or do you have another approach that works well? Let us know!

The Create Trailing Pseudo-Grace Notes plug-in for Sibelius automates a detailed method for creating grace notes at the end of...

Today Avid released Sibelius 2018.6, the latest version of its notation software. While the 2018.6 release is mostly geared toward...