Get smarter with smart quotes - Scoring Notes
Skip to content

One of the ways in which computer keyboards are descendants of the manual typewriter is the agnostic straight apostrophe and quotation mark. Bending neither this way nor that, it has never looked quite right compared to its curly, or “smart” brethren, to which no keys are expressly dedicated.

Some computer programs, like Microsoft Word, have automatic ways to correct this as you type, but Sibelius does not. When you’re intent on composing music you may not care too much about such niceties, but with just a little bit of know-how you can spruce up your contractions and quotations.

Whether it’s a score you created or one you’ve received from someone else, you may have a score that’s full of straight quotes. Easily beautify these with the shipping plug-in Smarten Quotes, found in Text > Plug-ins. You’ll first get a dialog asking whether you want to process the current score only, or a set of files within a folder.

Then, you’ll get a dialog with various options. Here are the ones I find most handy: 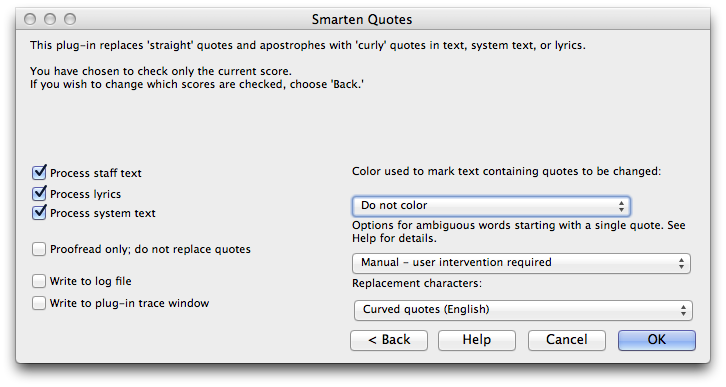 There are various automatic options for ambiguous words as well as for angled quotes found in some languages. Running the plug-in will turn, for example, this:

Not very hard at all. If you’re looking for something similar in Finale, my friend Robert Puff has a solution over on his blog, Of Note.

If you would rather type your desired characters directly, you can do that. When typing in lyrics, Sibelius offers some built-in shortcuts:

Note that these are not your computer operating system’s default keystrokes; the shortcuts included with Sibelius are pre-programmed via the Symbols word menu, which is used for the various lyric text styles. Curiously, these same shortcuts don’t extend to editing other types of text besides lyrics, at least not on Mac. If you want to, though, you could change that; see this recent blog post for instructions on how to go about editing Sibelius’s word menus.

You could, of course, use your OS’s keystrokes to enter these characters. Another option, suggested by my friend Doug LeBow, is to program shortcuts to your liking in a macro editor (like Keyboard Maestro or the mothballed but still functional QuicKeys).

However you enter these curly characters, you — and your scores — will be smarter for doing so.

A roundup of activity and news about Sibelius plug-ins over the last several months. Bob Zawalich takes us on a...

A plug-in designed to aid blind and vision-impaired people in navigating Sibelius can be helpful to sighted users too.

A Sibelius plug-in which will speed up working with text, allowing you to quickly swap one text style for another;...