While similar in many respects to the Extend to End of Selection feature introduced in Dorico 3, the origins of Fill With Tied Notes predate the release of Dorico 3. I was working on another Sibelius plug-in when I read about Extend to End of Selection in Dorico, and realized that I already had pretty much all the tools needed to produce the same effect in a Sibelius plug-in. I specifically did not look closely at how the Dorico feature works, as I did not wish to copy it. I just took the idea of getting the pitch from a selected note — an option I already had — and starting anywhere in a bar and ending anywhere in a bar, with all generated notes tied together.

When you make a selection and run Fill With Tied Notes, the added notes will have durations appropriate to the time signature of the enclosing bars. It can be especially useful when there are many time signature changes.

Here is an example of what it might do:

The plug-in will run without a dialog using the currently saved options if there is a valid selection. If the selection is not valid, the dialog will come up, to allow you to edit the settings, and explain what kind of selection you need to fill notes.

You can also fill notes between two notes in a single bar, as in this example:

A valid selection is a passage selection of one or more staves that includes at least one note or chord. The initial note may not be in a tuplet. Only visible staves will be processed; a staff will be considered visible if the first and last bars are visible.

There is an option to trace the reason why any skipped staves were rejected.

You can choose among a number of options for how the tied notes are generated, but if you do not change anything these are the default options, which should often work just fine:

Options available in the dialog

When the dialog comes up due to an improper selection, you can change any of the settings available; these changes will be remembered.

In most cases, if a single note can be used to fill a bar, a single note will be used. A 4/4 bar would be filled with a whole note, a 6/8 bar by a dotted half, and so on. Changing the options for Allowed durations for single notes and Allowed dotted state for notes can change which bars can be filled by a single note, and which must be tied notes.

In the second example below, changing from the default largest duration of a whole note and single dots to allow double whole notes and triple dots means that the 7/4, 12/4, and 15/4 bars which were previously filled with tied notes, can now be filled with single notes.

Some time signatures, like 5/4 and 13/4 will always be filled with multiple tied notes, because there is no allowable single note that will fill such a bar.

If you select Use custom tied note groups and select the option Override single note fill with custom group, you can specify that certain time signatures (such as 8/4) will be filled with tied notes rather than with a single note, as described below.

If a bar cannot be filled with a single note, the plugin will break the duration required into several tied notes. Unless custom tied groups are used, tied notes in a bar will be grouped in sets of 3 notes or 2 notes, similar to the groupings Sibelius uses in Appearance > Reset Notes > Reset Beam Groups.

The plug-in treats the top number of the time signature as the number of notes in a bar, and the bottom number to be the duration of a single note.

The Customize Tied Note Groups dialog explains what the group descriptions mean and how to create your own custom groups. 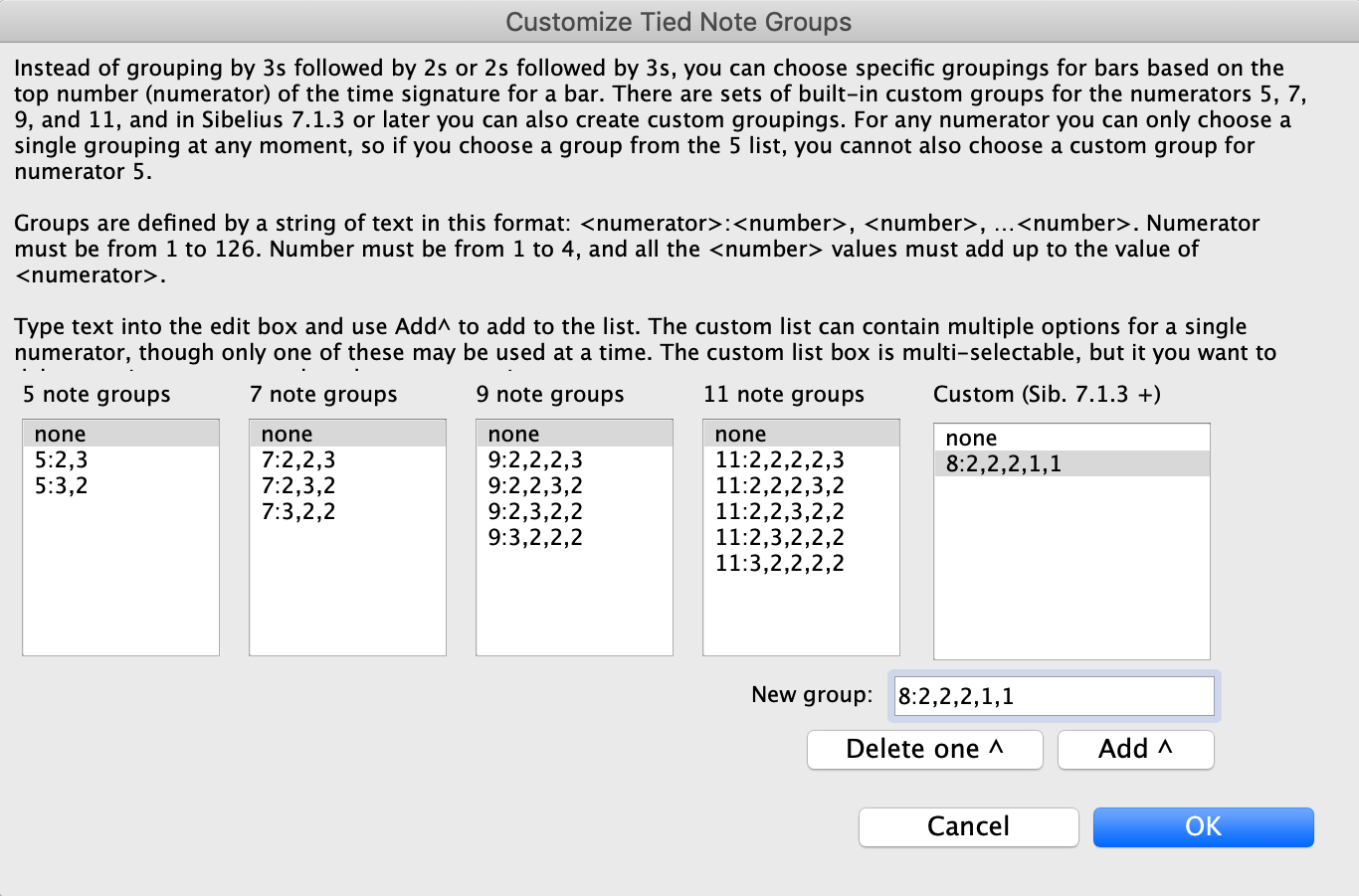 In the settings used above, there are fixed presets for groups of 5, 7, 9, and 11 notes, and a list box for user-defined groups. The first number in 8:2,2,2,1,1 is the number of notes, and the other numbers are groups of notes. For 8/4, with the two custom group check boxes in the main dialog checked, the grouping above would look like this:

You can define many custom groups, though only one per time signature top number can be used at a time. They will only be used if Use custom tied note groups is checked.

Fill With Tied Notes can be downloaded directly through Sibelius 7 and higher at File > Plug-ins > Install Plug-ins > Notes and Rests. Users may also install it manually in Sibelius 6 or higher by visiting the plug-in download page and following the usual manual installation procedure, or by using the Install New Plug-in plug-in.

A plug-in automatically corrects the default length of the single slashed grace note in Sibelius, resulting in a more pleasing...