You know the old saying: There are as many ways to customize the spelling of chord symbol suffixes as there are stars in the sky. Never heard that one? Well, me neither, but it might be true.

“Chord symbol spelling in the real world is highly variable. Everyone wants to believe that their preferred method of spelling chords is the One True Way. In reality, what is considered correct is determined by consensus within musical communities. That said, there are practical reasons to prefer chord symbols that are concise, compact, consistent, unambiguous, and visually distinct from one another.”

If you have found yourself stymied in your quest for the One True Way when customizing your chord symbol suffixes in Sibelius, we can help. Although they might not appear to be at first, chord symbols are highly customizable in Sibelius — you just need to know where to look and understand how it works.

Before we proceed further, it should be said that we are working with the “new”, or rather Sibelius 6+ chord symbols paradigm, and not the “legacy” method. Be certain that, in Preferences > Other > Chord Symbols, that Use legacy chord symbol input is unchecked. For good measure, also be certain that you are inputting chord symbols using the Ctrl/Cmd-K shortcut (Text > Chord Symbol > Chord Symbol) and not via the Text > Styles > Chord symbols (special) category, the latter of which will result in a legacy symbol.

The challenge: Customize to suit

The best way to illustrate the process of customizing chord symbol suffixes in Sibelius is by way of a real-world example. I have a client who prefers that augmented triads are displayed with the plus sign (instead of aug), but that diminished triads be shown as dim (instead of the circle).

While it’s not Darcy’s preferred style, it is a reasonable request. But in Sibelius’s Appearance > Engraving Rules > Chord Symbols, you have limited options here.

So how do we have our cake and eat it too?

It should first be noted that the Engraving Rules should be your first stop, before attempting to customize the chord symbols further. If you are able to achieve your desired settings within the Engraving Rules, this is the most preferable option, and your selections will be reflected in your score immediately. Engraving Rules settings are particular only to the document you’re working in, and can be exported and imported in house styles.

In this instance, though, we need to customize.

In Engraving Rules, I’ve gone with the + / O / Ø option, but I want to override the appearance of the diminished triad.

Let’s start by selecting a chord symbol with the suffix we want to customize.

Selecting the chord symbol isn’t strictly necessary, but it saves a bit of fumbling about in the next step, because Sibelius will take us right to the chord symbol suffix we’re working with (in the same manner that selecting a bit of text and going to Text > Styles > Edit Text Styles jumps right to the text style of the selected text).

Go to Text > Chord Symbols > Edit Chord Symbols (that’s the “disclosure”, or downwards- and right-pointing arrow in the Ribbon), which brings up this dialog window: 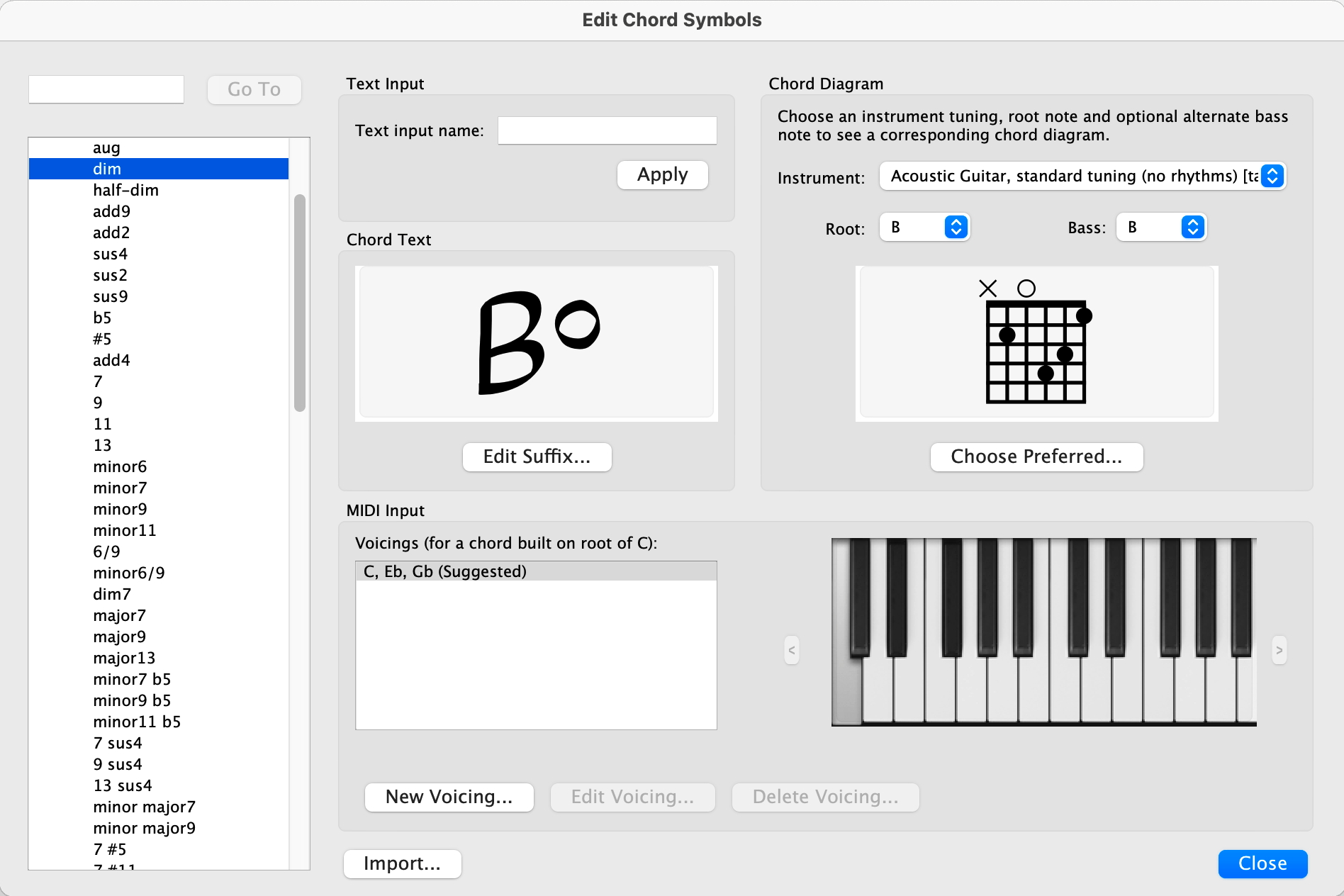 As promised, the dim suffix is already selected for us, saving the tedium of locating it in that very long list.

Click Edit Suffix… to be brought to the next window: 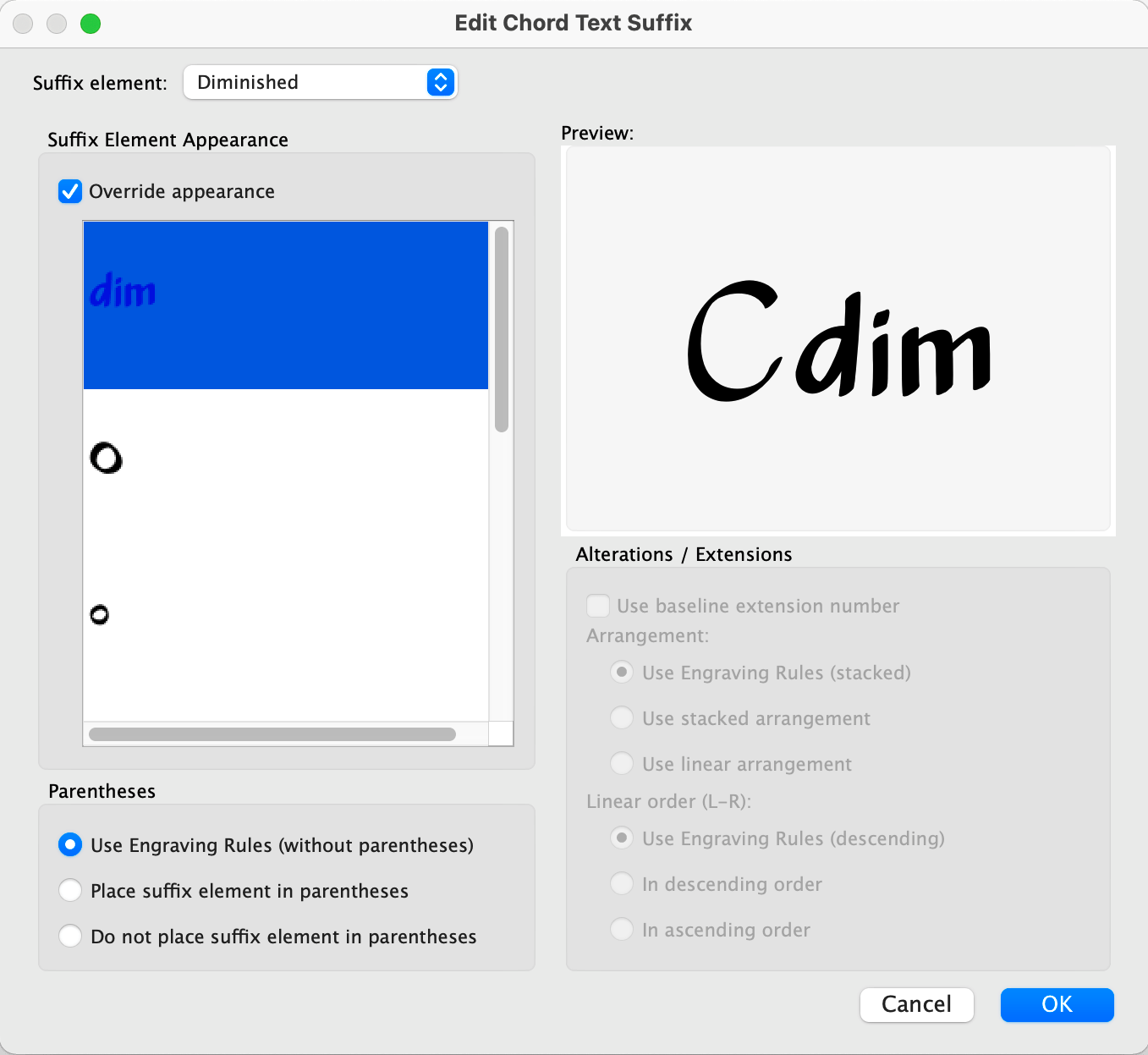 Choosing an alternative suffix isn’t the only option available; you can optionally choose whether or not to parenthesize the suffix element, and, in the case of suffixes with two or more alterations or extensions, stack or linearly arrange them, and in what order. Because we only have one suffix element here, those options are grayed out, but the appropriate options will be available depending upon the chord suffix selected. You’d also find that you can work on each suffix element independently by making a selection from the Suffix element dropdown menu; here, Diminished is the only option.

With all that in mind, click OK to exit out of this dialog and the preceding one.

Before you fret, though, you can easily make this change without deleting and re-entering your chord symbols. Simply choose Appearance > Design and Position > Reset Design (Ctrl/Cmd-Shift-D): 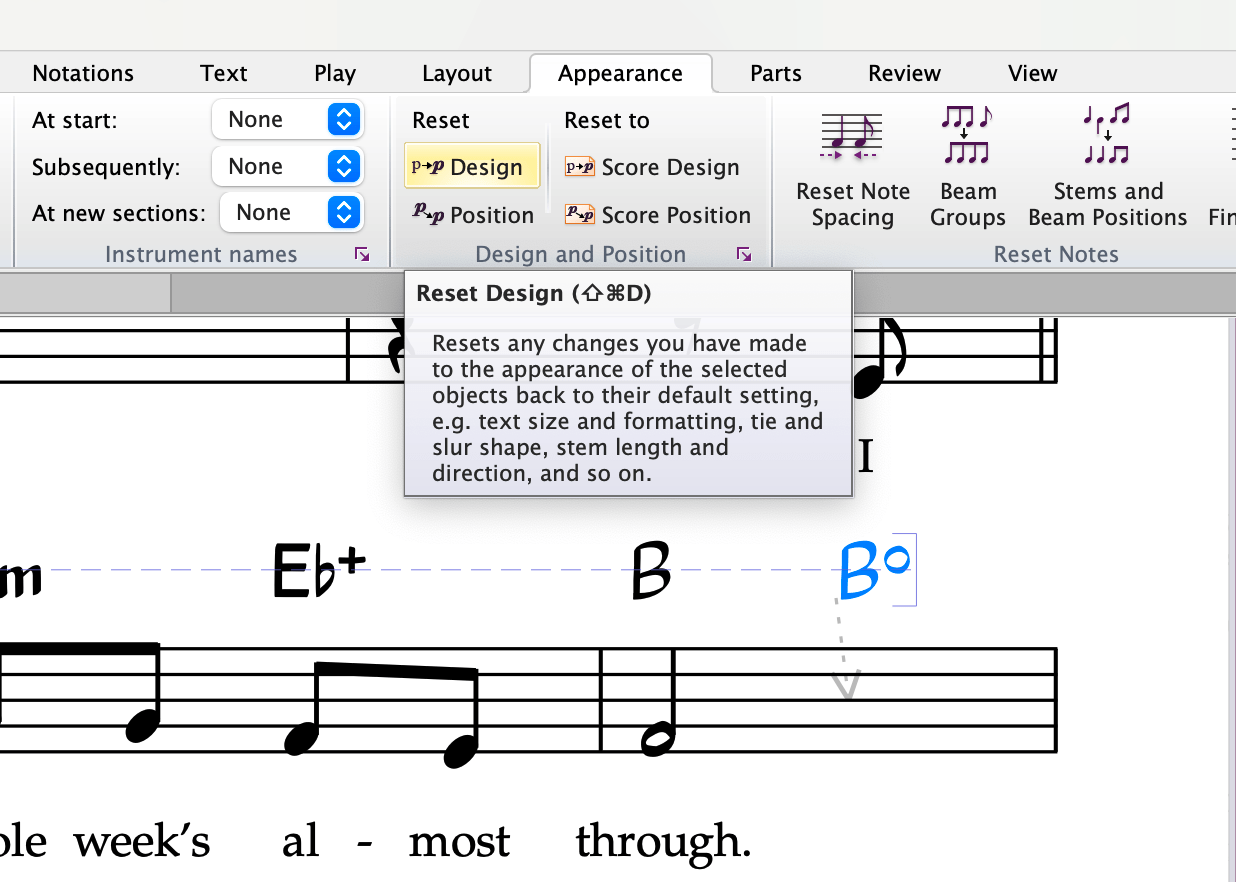 And this will make the selected chord symbol(s) inherit the customizations:

Now that you know how to customize chord symbol suffixes in Sibelius, you should be aware of what’s happening behind the scenes.

Remember how, earlier, I said that Engraving Rules settings are particular only to the document you’re working in? Well, that is not the case with chord symbol customizations.

These settings are global to your Sibelius setup. When you make a customization for the first time, like the one I’ve made with the diminished chord, behind the scenes Sibelius is writing an application support setting that affects your Sibelius experience on the computer you’re working on. It’s in ~Application Support/Avid/Sibelius/Chord Symbols on Mac (or the equivalent AppData\Roaming folder on Windows) and it’s called UserChordCustomisations.xml.

Since it’s an XML file (not to be confused with MusicXML), it’s somewhat human-readable. The one that Sibelius created for me looks like this:

You don’t need to be too concerned with this, but it’s good to know where this file lives. If you ever want to wipe away all of your chord symbol customizations while leaving your other preferences intact, you can quit Sibelius, find this file in your Application Support folder, delete it, and restart Sibelius.

Because this file lives on your computer, you might think you need it to be present in order for your file to display correctly on someone else’s machine, like a custom font — but that’s not the case. The override is “sticky” for any chord symbols you’ve entered already. That means that a Sibelius file opened elsewhere will show the same suffixes, regardless of the settings in the user’s customization file.

An imprecise but helpful analogy is a house style. If you import a house style into your Sibelius file and then save that file and send it to someone else, all of the document settings are retained in the file — the destination computer does not to have the same house style saved in their support folder.

When I copied Wayne Shorter’s “Ana Maria”, I started with the settings in the Engraving Rules: 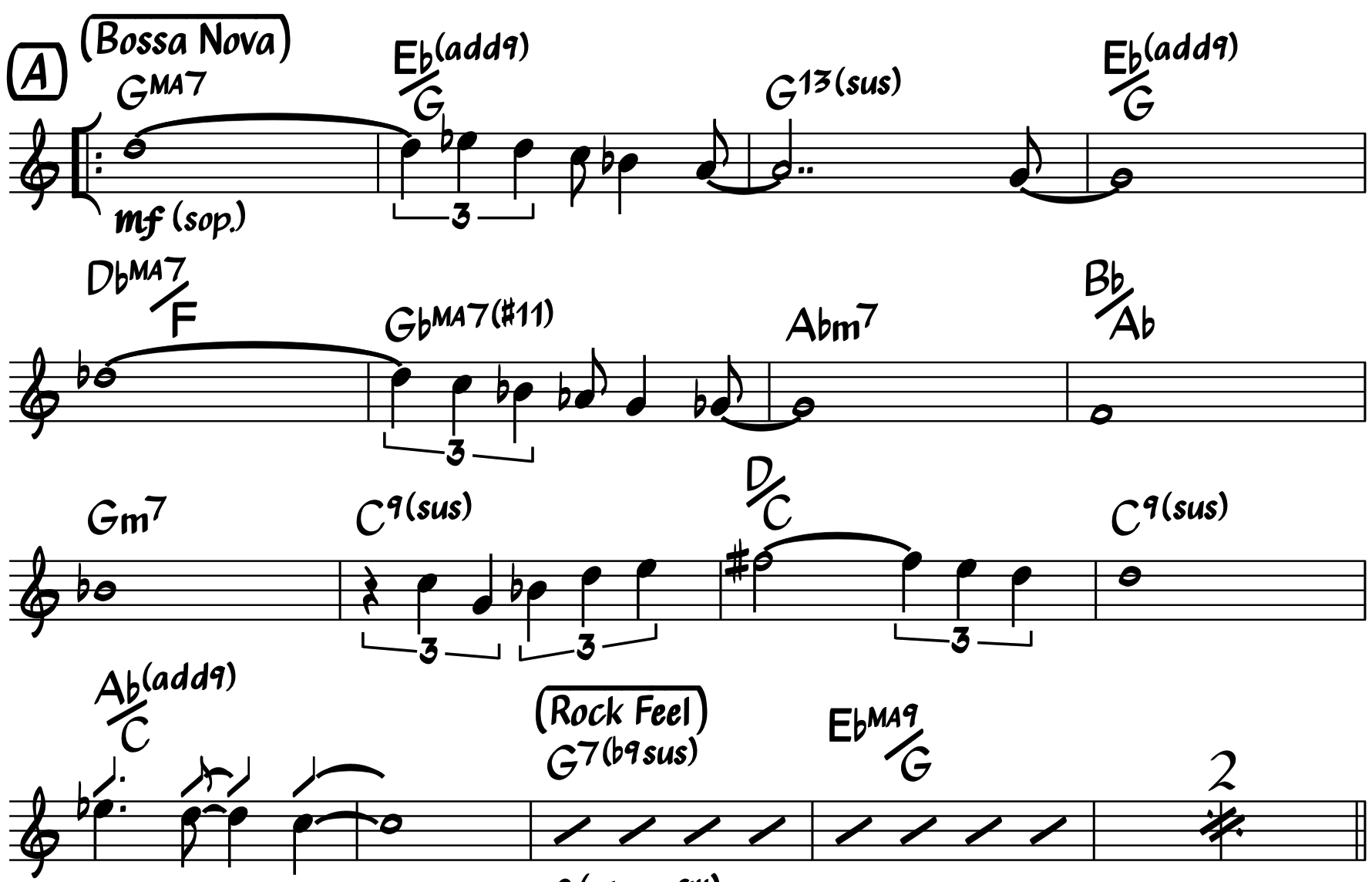 And then customized some of the suffixes to more closely match the style of The New Real Book: 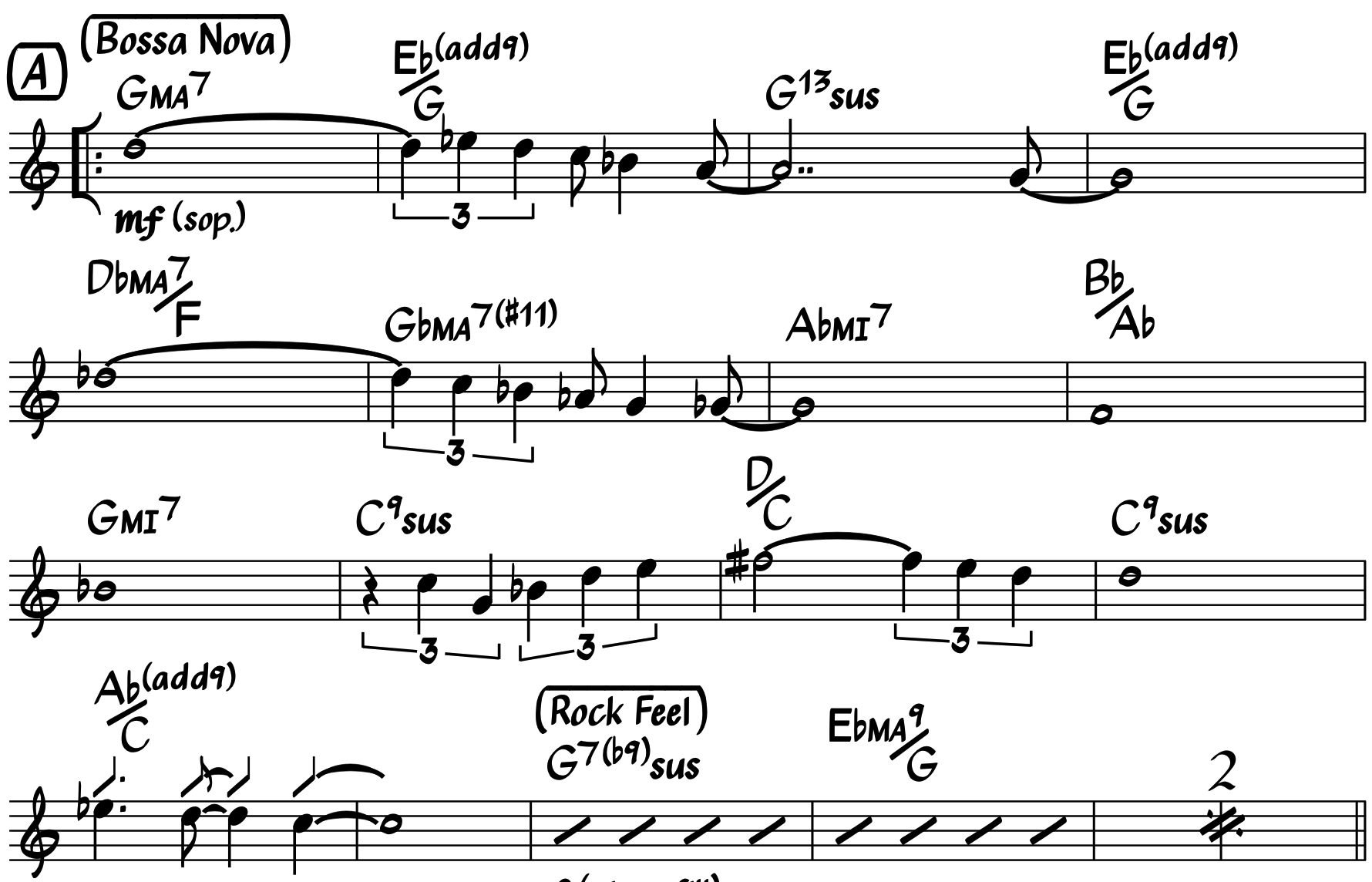 If I were to send this Sibelius file to anyone else, the chord symbol customizations would be retained, as long as Reset Design was not applied.

Any recipient, would, of course, want to have the fonts used in this document, which are the beautiful Pori fonts available from Notation Central (you didn’t think I would let that opportunity slip by, did you?).

And if you want to get results like this even more quickly, you can get the Scoring Express Jazz suite, which includes the first example used in this article as a sample score.

But even if you don’t pick up those items, hopefully this series of tips will help you unleash the power of Sibelius’s chord symbols, which, despite being somewhat obscured behind these various dialog boxes — and an unusual mix of document- and user-specific settings — can permit you to apply a great deal of sophistication and preference to this highly variable aspect of music notation, in pursuit of the One True Way.

Steinberg’s handwritten music font Petaluma was made into a derivation for Sibelius called Pori. What if you want to use...

Sibelius center-aligns chord symbols by default. If you prefer that they be left-aligned instead, you'll need to change a few...