This blog post was written by Robert Puff, who was one of the industry’s top music preparers. Robert and his company RPM Seattle prepared scores and parts for over 100 feature films since 1995. He also wrote the insightful blog Of Note, where he shared Finale & Sibelius tips and tutorials.

Read on to learn more about how to create custom line shapes using font characters in Sibelius.

Ever wonder how trill lines are created in Sibelius? These are actually not a continuous line shape at all; rather, the trill line is created by displaying the “~” font character as end-to-end segments repeatedly.

The trill character was not originally designed to have its shape edited, so It isn’t immediately obvious that it is possible to use this same repeated font character technique to create an entirely new line graphical line like this harp gliss: 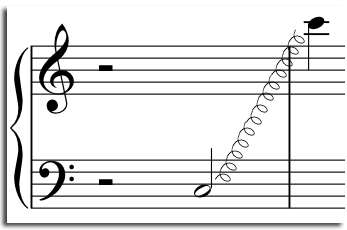 Here is an example where the composer used a very specific notation over each of the held notes. This is relatively easy to re-create in Sibelius:

Here are the steps:

2. Scroll down to the Guitar section, and locate the symbol labeled “Wide vibrato segment (internal)”:

When you go back into the Lines gallery in Sibelius 7 (or the Lines dialog in Sibelius 6), you will see your new choice, still labeled “Wide Vibrato”.

If the new line you are creating is horizontal, that’s all there is to it. If you are going to use this new line for glisses, you will need to be able to angle it. Go into the Lines group of the Notations tab in Sibelius 7 (or House Style > Edit Lines in Sibelius 6) and uncheck the “Horizontal” checkbox.

The reason we chose the “Wide vibrato segment” symbol rather than, for instance, the standard trill line character is because this is what we might call a “destructive edit”; since we actually need to replace one of the default line symbols with another to create the custom line, we want to be sure to maintain access to the standard trill, which is more likely to be required in the same score.

Tone clusters are a shorthand notation for several adjacent notes played at once. In this comprehensive post, we'll discuss many...

Sibelius includes four complete families of music fonts as standard, each of which has a slightly different look. Opus, the...