Recently I showed how, in Sibelius, to create a part with an instrument that’s entirely different than what’s in the score. This is helpful, for instance, to make a clarinet part in a different transposition than the original part, or a treble clef baritone part linked to the bass clef euphonium part.

In that post I described the general concept in a little more detail, so check it out if you haven’t read it already. Here, we’ll jump right into Finale and use a similar example — creating an additional Clarinet in A part based a Clarinet in B♭ part.

Let’s start by going to Document > Edit Part to open the part with the original transposition. Here, it’s the Clarinet 1 in B♭ part. 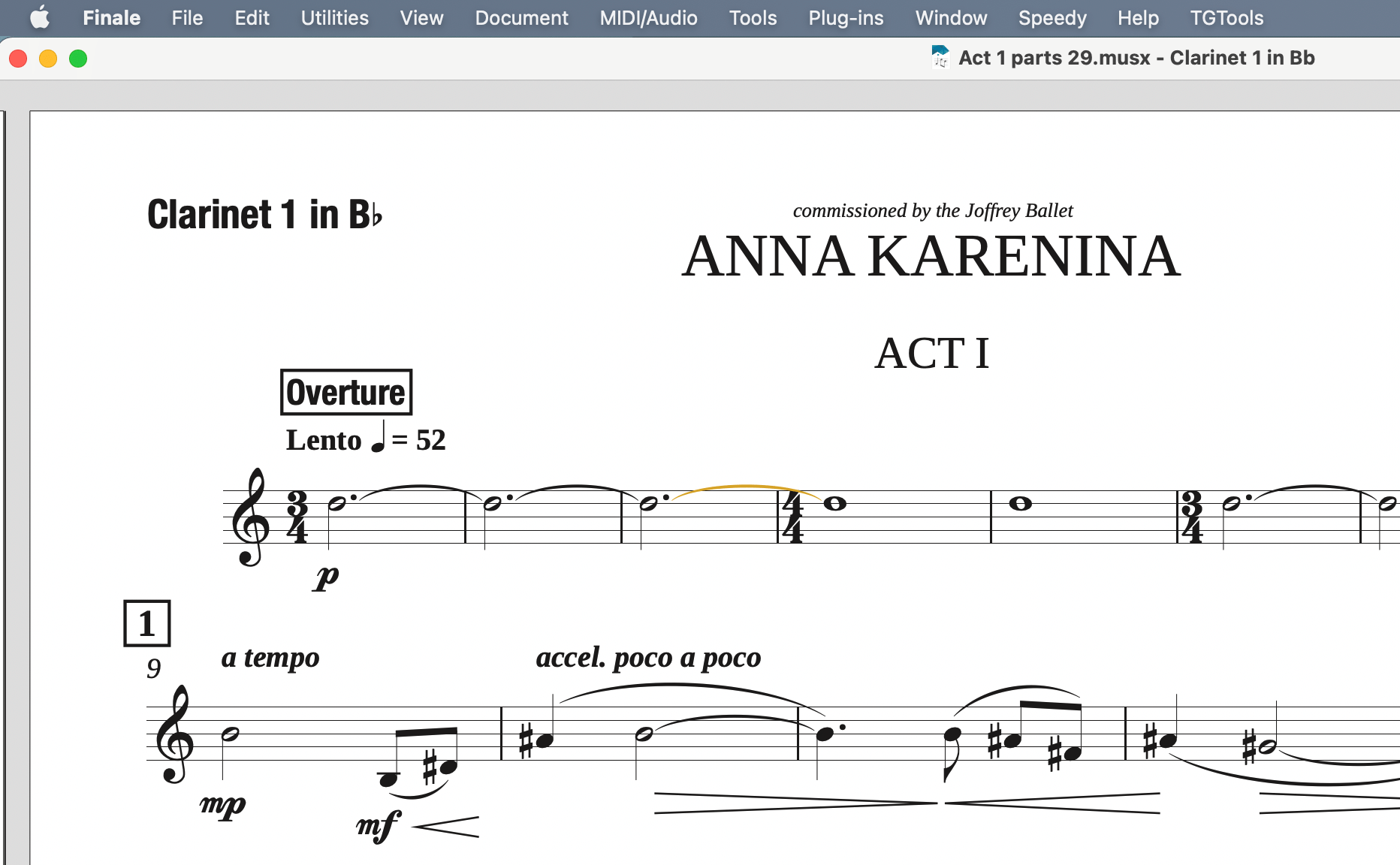 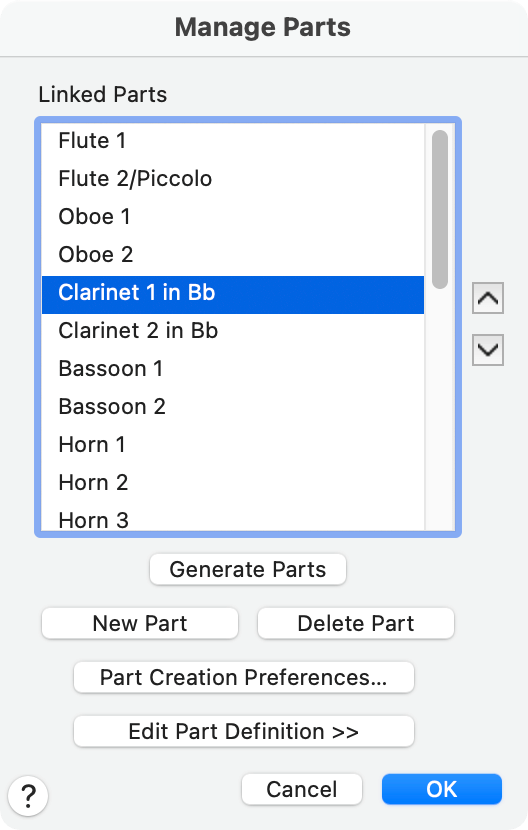 Click New Part. The window will expand, and you’ll get a new, unnamed part in the Linked Parts column.

Select your original instrument (Clarinet 1 in B♭) and click < Add to Part to add it to your newly created part. 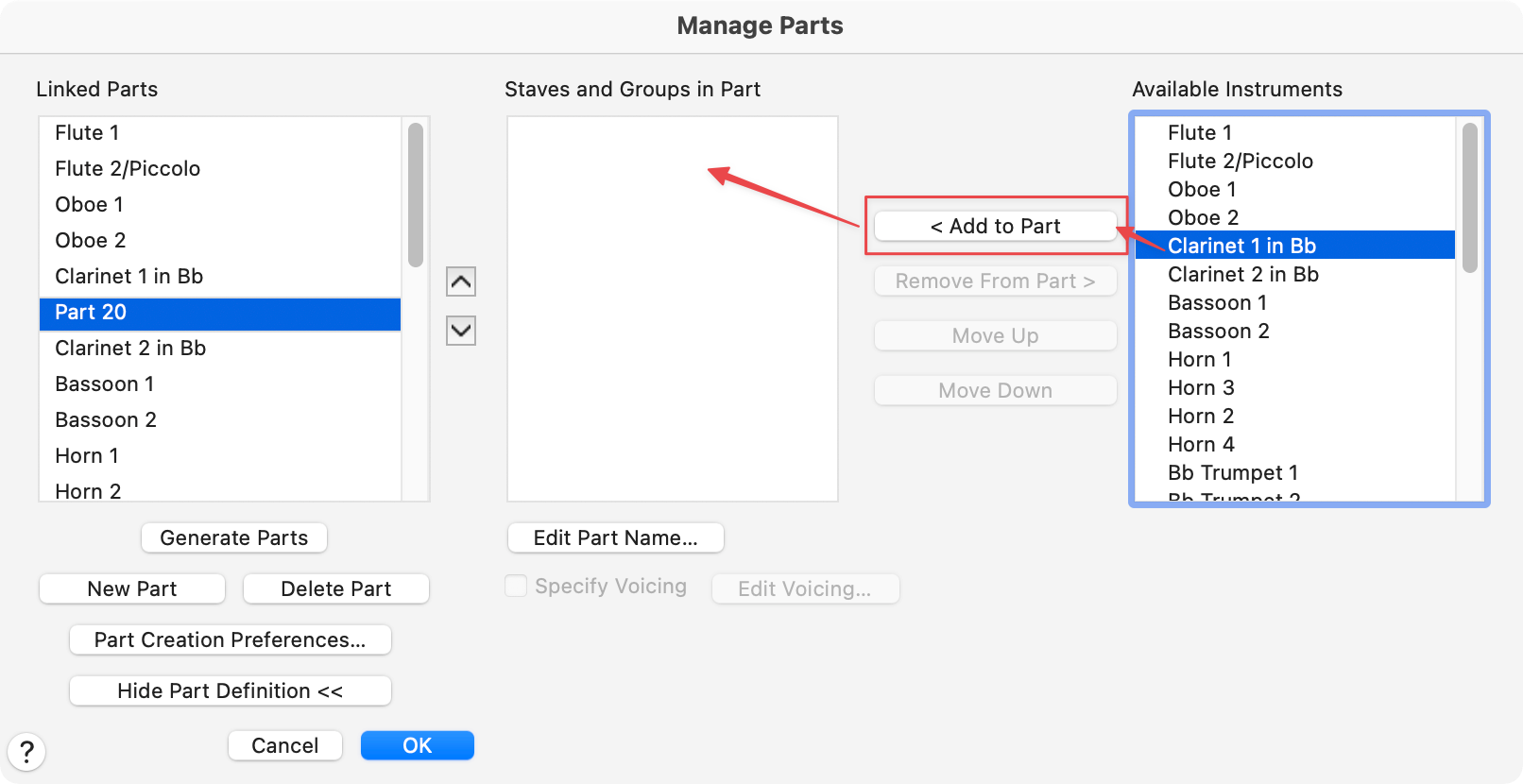 After clicking < Add to Part, you’ll see this: 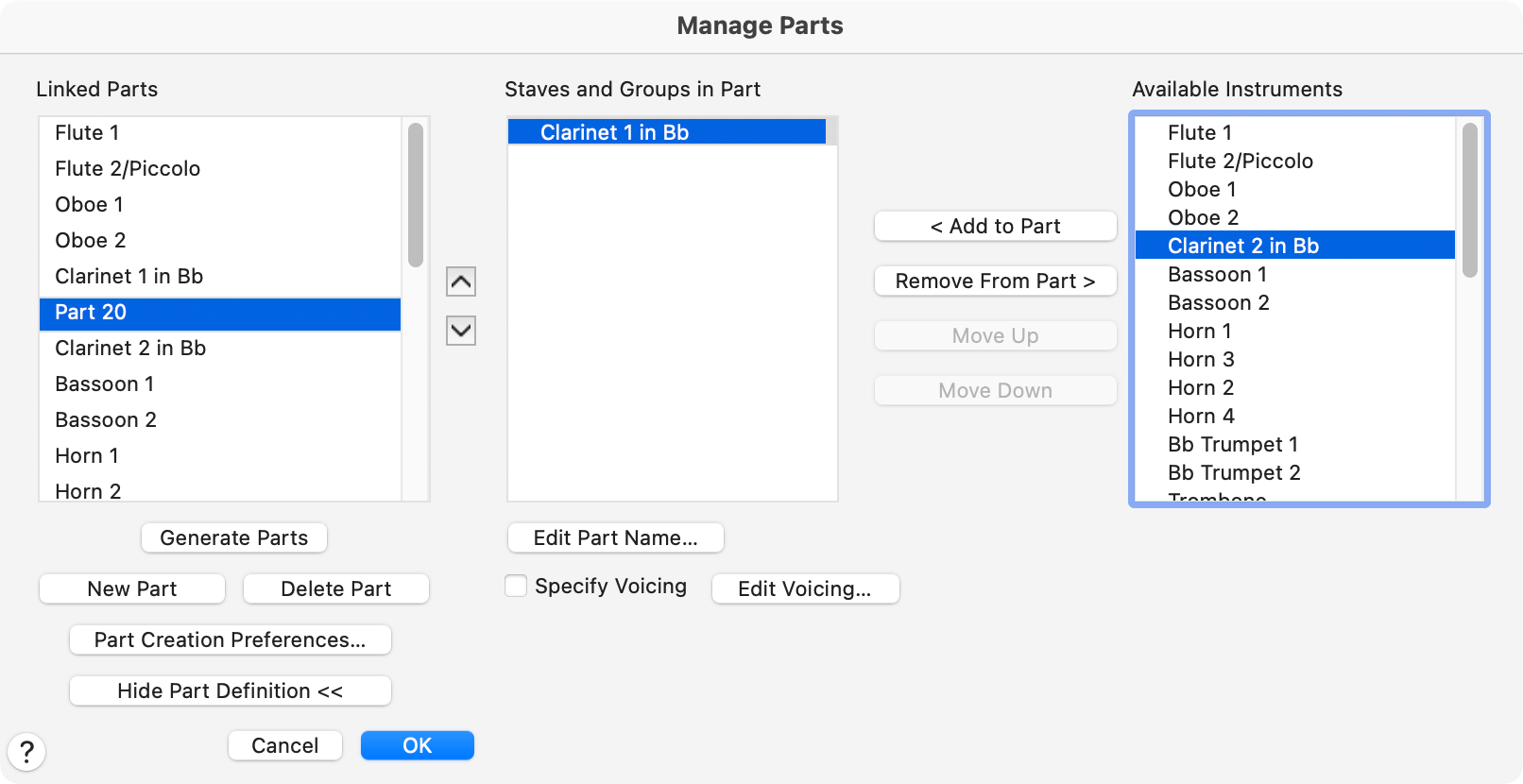 Click Edit Part Name to rename this part to your new part name (Clarinet 1 in A): 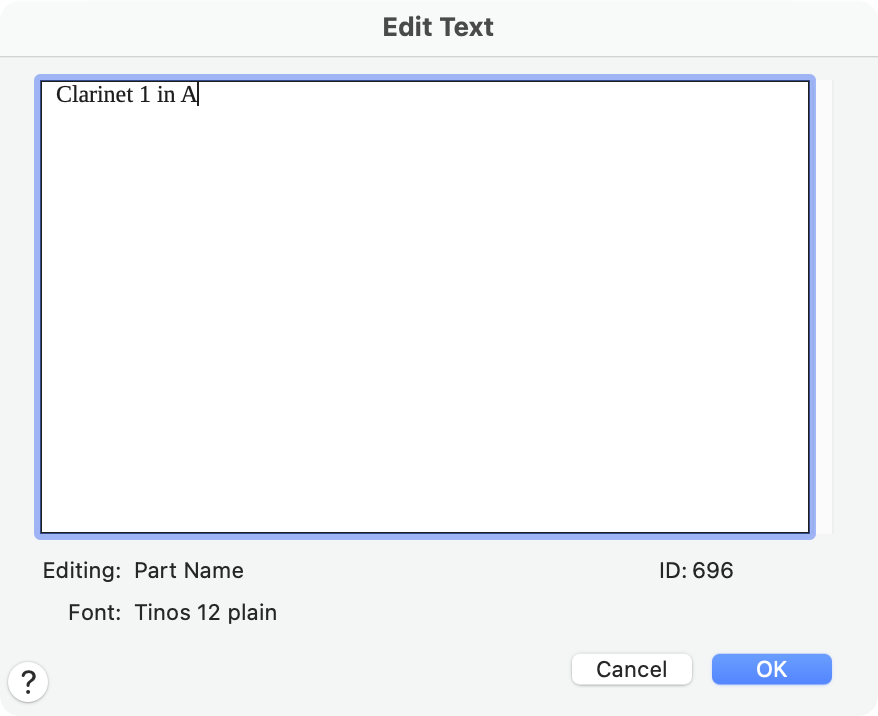 Click OK. In the Linked Parts column, you now have your Clarinet 1 in A part. In the Staves and Groups in Part column, it says Clarinet 1 in B♭, because that’s the instrument upon which your new part is based: 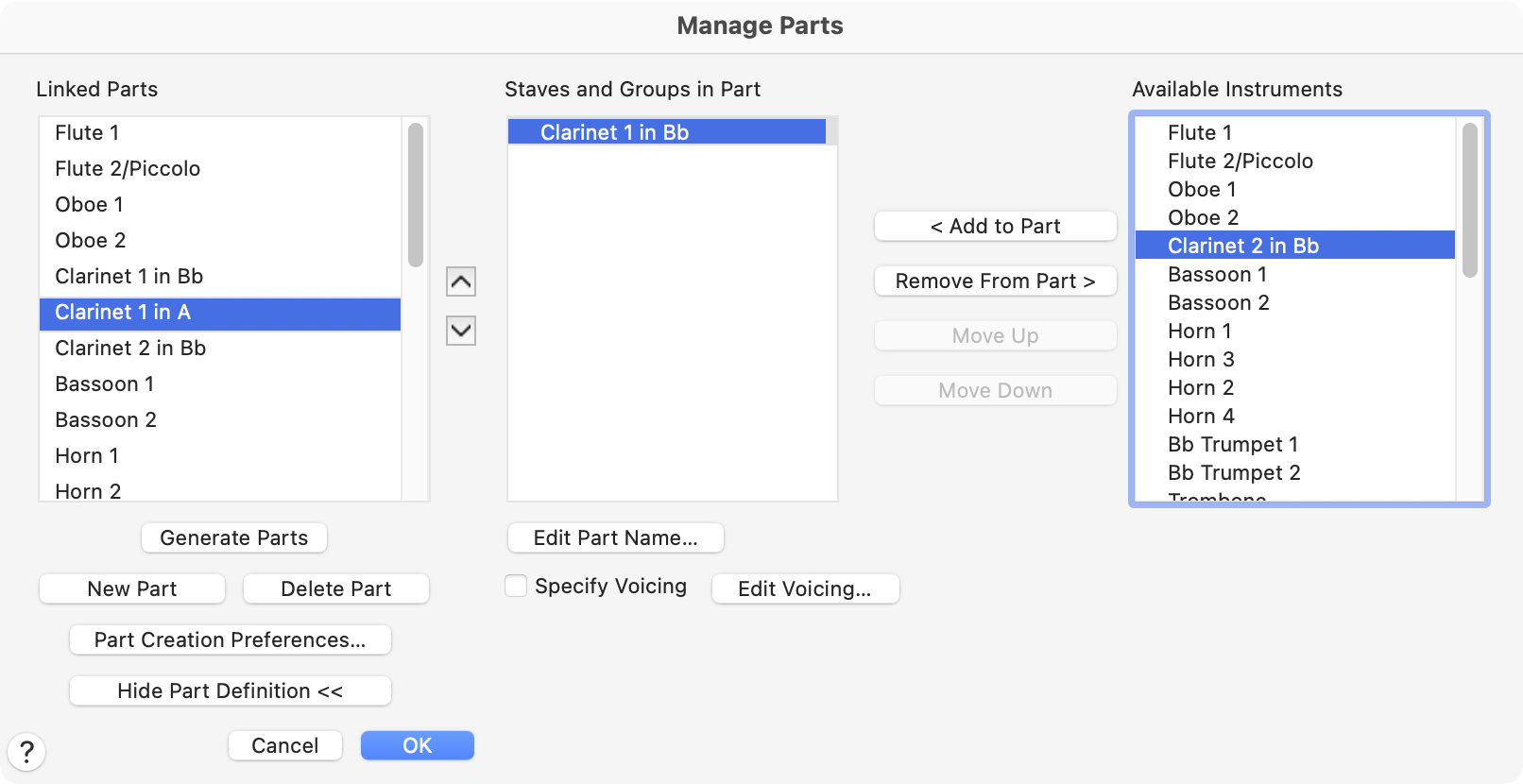 Congratulations! You now have a new part.

Of course, simply naming the part something different doesn’t simply make it so. I could have named this part “Banana” and a potassium-rich fruit (technically a berry) would not have magically appeared. So, we need another step.

With your new part in the active window, open the Window > ScoreManager (Command/Ctrl-K).

See the box called Unlink All Instruments in This Part? I’ll bet you never noticed it. It will be unchecked by default. Go ahead and check it: 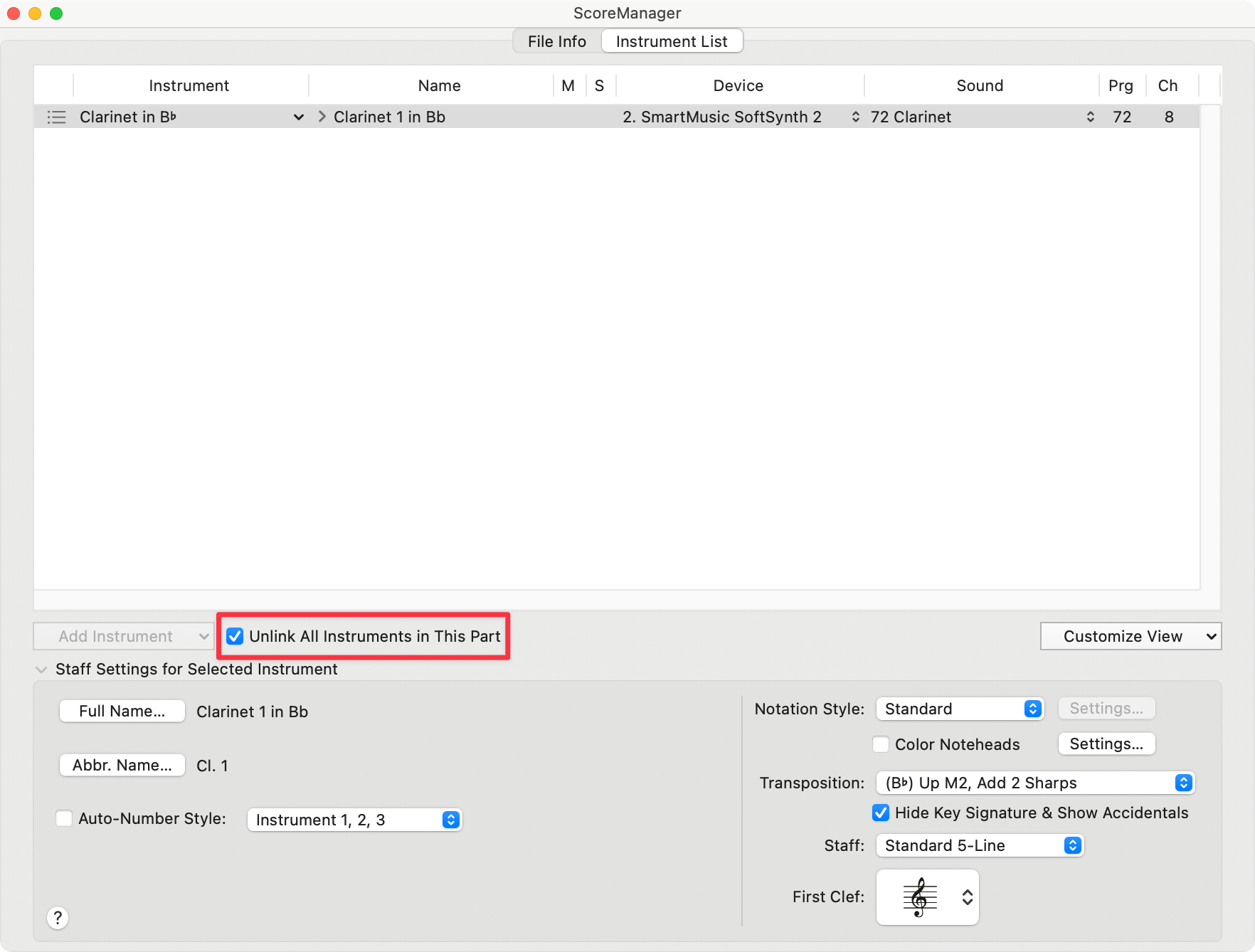 With this command checked, changes made to the staff settings in the ScoreManager, such as the clef and transposition, will apply only to the current part. The respective staff or staves in the score will be unaffected. With this box checked you can also select an entirely different instrument, which is what we’ll want to do here:

Notice how the Transposition automatically changed: 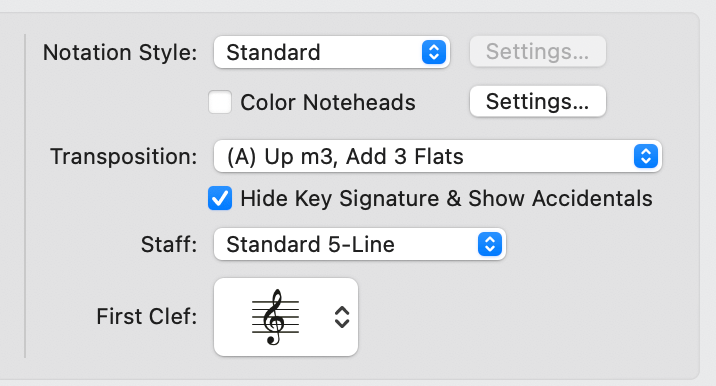 Now we have a part that’s based on the same staff as the Clarinet 1 in B♭ part, but is transposed a minor third higher than concert pitch (in A).

We’re almost done. As we did in the Sibelius example, if you’ve formatted your original part already, we’ll want to copy over our system breaks and spacing into the new part.

In Finale v27.3, which has not been released at the time of this writing, the JW Copy Part Layout plug-in will be bundled with Finale, making everything a lot easier.

However, if you don’t have v27.3, you’ll need to download the plug-in first, quit Finale, install the plug-in by following the installation instructions for Mac or Windows as appropriate (see the Installation tab), and re-start Finale. (Note for M1 Mac users not on v27.3 or later: You’ll need to run Finale in Rosetta mode.)

Then, go to your newly created part and run JW Copy Part Layout, and select the part from which you want to copy the settings. 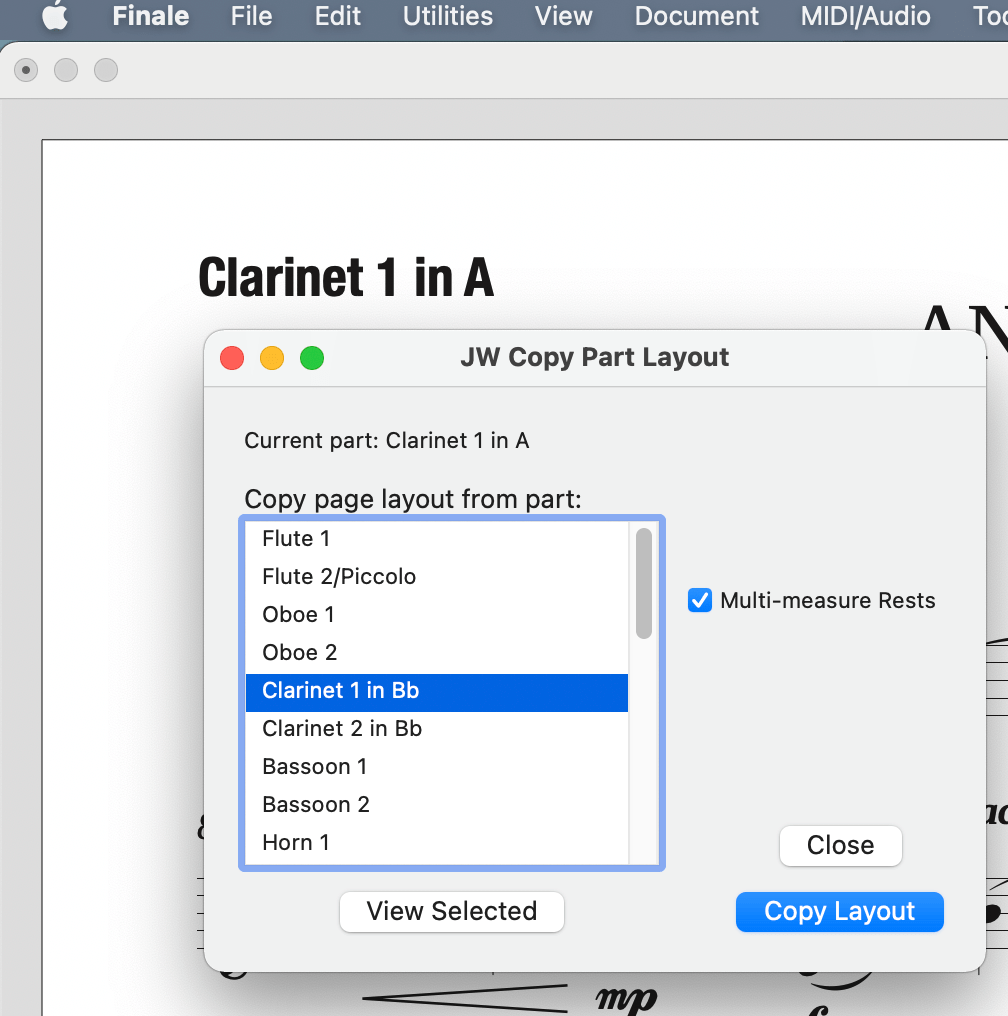 Note that, unlike the similar feature in Sibelius, in Finale, you’re copying from your source a part instead of to a destination part, but the end result is more or less the same.

Click Copy Layout and you have a part that should very closely resemble your original part, with respect to page and system size, margins, and multimeasure rests.

JW Copy Part Layout doesn’t copy over the position of system text like the Sibelius equivalent does, so you may need to make some manual adjustments there (see the position of the rehearsal mark in the above example, for instance). You’ll also want to give the part a scan for misaligned dynamics and other engraving niceties.

(Note that you can’t use Utilities > Respell Notes to do this, as doing so will change the enharmonics in the score and other part(s), as well.)

It may be useful to switch on Preferences > Color Unlinked Items, if it is isn’t already, so that you can keep track of such differences, which will be colored in orange.

Of course, the usual benefits to linked parts are available to you, meaning that you can change the position of many elements in one part without affecting the other part or the score, to make fine adjustments.

How are you using this? Did you find this helpful? Let us know in the comments. This post is long enough already, but the concept is similar in other software like Sibelius, where we’ve documented the process, and Dorico, where we walk through the steps in that program.

The Score Manager is command central for your Finale document. Get to know every control on the dashboard, from file...