Recently I received an urgent message from an orchestra librarian: “Do you have PDF files for A clarinet parts? Our principal *just* asked if they were available. It is being rehearsed in about a half hour!”

I didn’t have those parts immediately available — the parts were in B♭ — but I had the Sibelius file, and I know a little about music notation software. Challenge accepted!

The crude but effective solution might have been to simply use Sibelius’s Note Input > Transpose function (Shift-T) to bump everything up a minor second. Indeed, with limited time and knowledge of the software, if you found this solution, selected everything, and created a part to get you through the imminent rehearsal, you would deservedly be the hero.

But that’s not the technically correct solution. The Transpose function, or its equivalent in all the notation software programs — Finale, Dorico, MuseScore, and pretty much any program possesses this most basic of features, after all — will actually, you know, transpose the music, meaning that it will sound a minor second higher than it did before when you play it back. Not to mention, if you copy and paste that music elsewhere, the pitches would be wrong. Oh, and did we mention key signatures? If you transpose a single staff, the key signatures won’t come along for the ride, so you’ll have a lot of undesirable non-harmonic notes and accidentals to contend with.

For all those reasons, using Transpose for such a task is ultimately incorrect, and could cause unintended consequences later.

Instead, the right way to do this is to effect an instrument change, with a little help from Sibelius’s house style and layout tools.

You may already know about instrument changes. Found in Home > Instruments > Change, it’s what allows you to change, say, an Oboe to an English Horn, or an Alto Sax to a Tenor Sax in the middle of a piece.

You may also know that it’s also used to facilitate transpositions for the same instrument, such as the aforementioned Clarinet in B♭ to Clarinet in A.

What you may not know, however, is that you can have a part with an instrument that’s entirely different than what’s in the score. That’s because, in Sibelius, when you apply an instrument change while working in a part, it only affects the part, and not the score. The same is true for clefs.

What’s more, you can create a separate part for each instrument transposition you wish to facilitate. This “have your cake and eat it too” solution is a lesser-known benefit of music notation software.

By now, we’re accustomed to using “linked” or “dynamic” parts so that you don’t need to extract parts. We usually see a one-to-one relationship between a staff in the score and a part, because this is what’s needed most of the time, and the software typically automatically sets up a file in this way.

Sibelius even has a feature that automates the process somewhat. It’s called Copy and Change Instrument, and you’ll find in in the Parts > Setup tab. 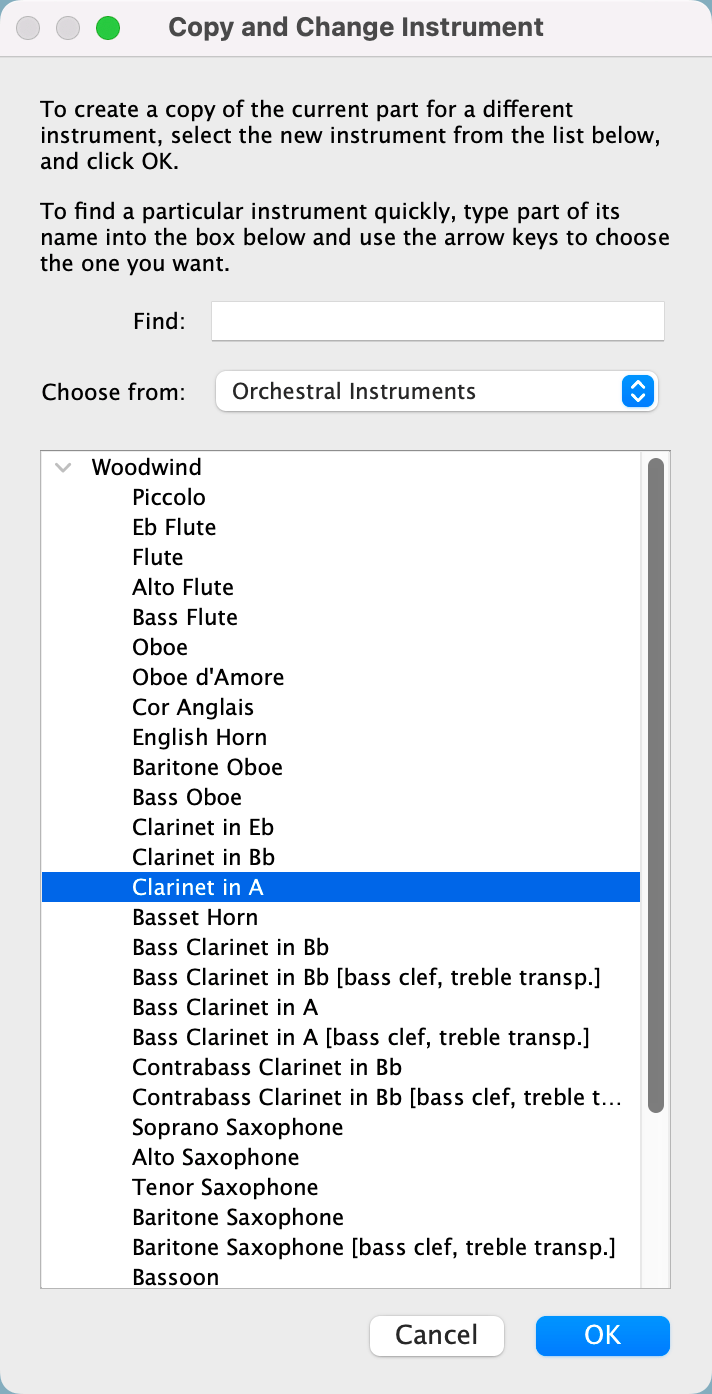 Copy and Change Instrument saves you the manual steps of adding a new part based on an existing part, but if you truly want to create an alternate part that resembles the original one as closely as possible with respect to formatting and layout, you’ll need to follow a couple more steps.

The first thing to do is export your original part’s house style. In this example, I’d go to my Clarinet in B♭ part and, in Appearance > House Style > House Style, click Export. Name it something you can easily find in a moment, like “Clarinet part”.

Then, open the new part in the active window — the Clarinet in A part, in this example — and go to Parts > Layout > Part Appearance > Current Part. This brings up the Multiple Part Appearance dialog — a bit of a misnomer here, since we’re only working on a single part, but don’t let that worry you — and, in the House Style tab, click the Import House Style button: 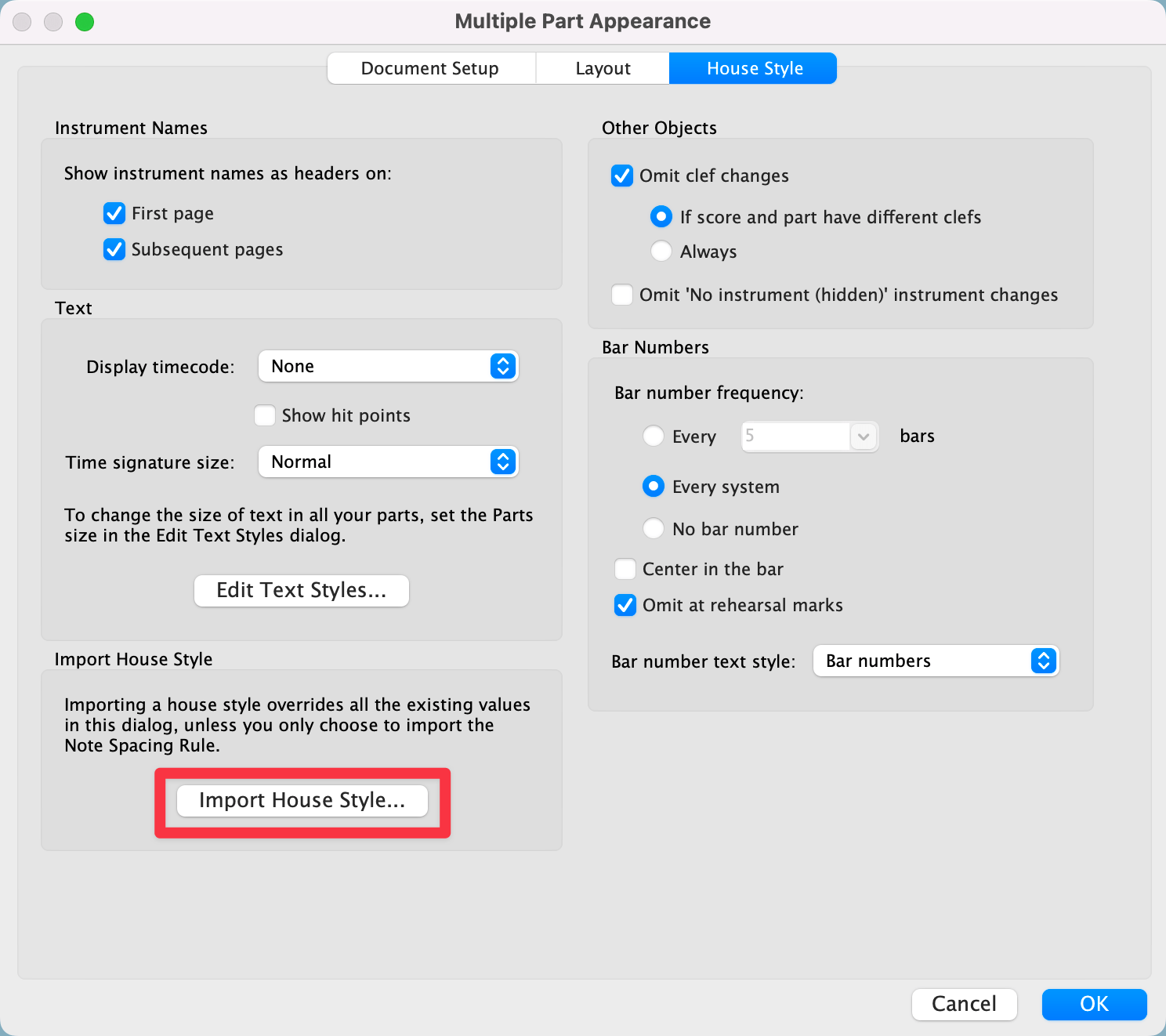 As it says, once you import a house style into the part, it will override everything else in the dialog, so don’t bother clicking anything else.

From the left-hand side, choose the name of the house style you’ve just exported (“Clarinet part” in this example), and make sure the three checkboxes are checked (everything else will be greyed out, since they don’t apply when you import a parts house style). 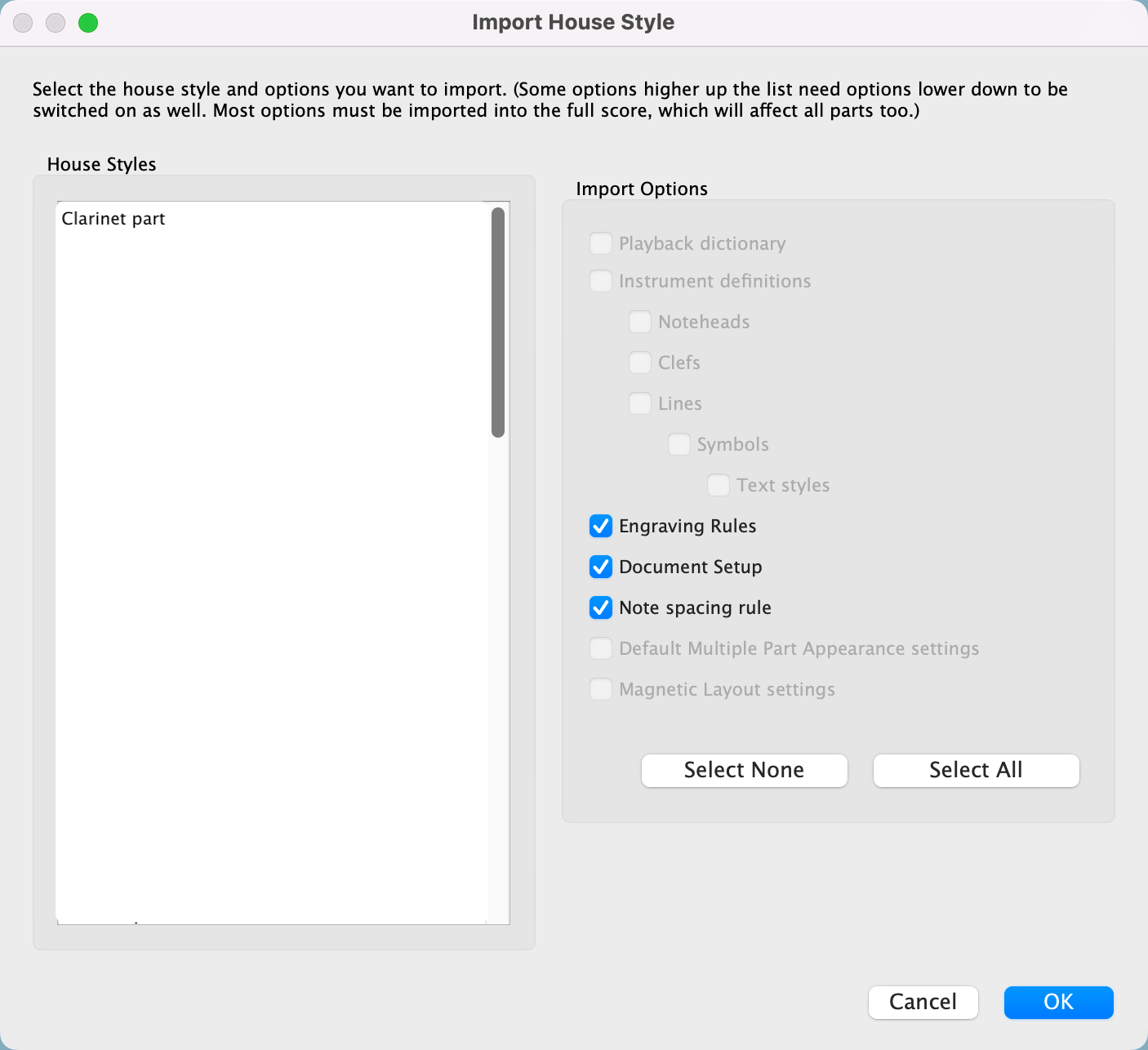 Click OK to apply and again to exit Multiple Appearance. This will make sure that your page size, staff size, auto breaks, bar number settings, and any other part-specific settings are the same in both parts.

Importing the house style doesn’t actually copy over any part-specific system and page breaks, however. For that, there is yet another step.

Go back to the original part — Clarinet in B♭, in our example — and choose Parts > Layout > Copy Part Layout. The Source part should be selected on the left, and the Destination part(s) should be selected on the right (you can select multiple parts here, if you like). Copy Part Layout will also copy over part-specific positioning of system objects, like tempo text and rehearsal marks. 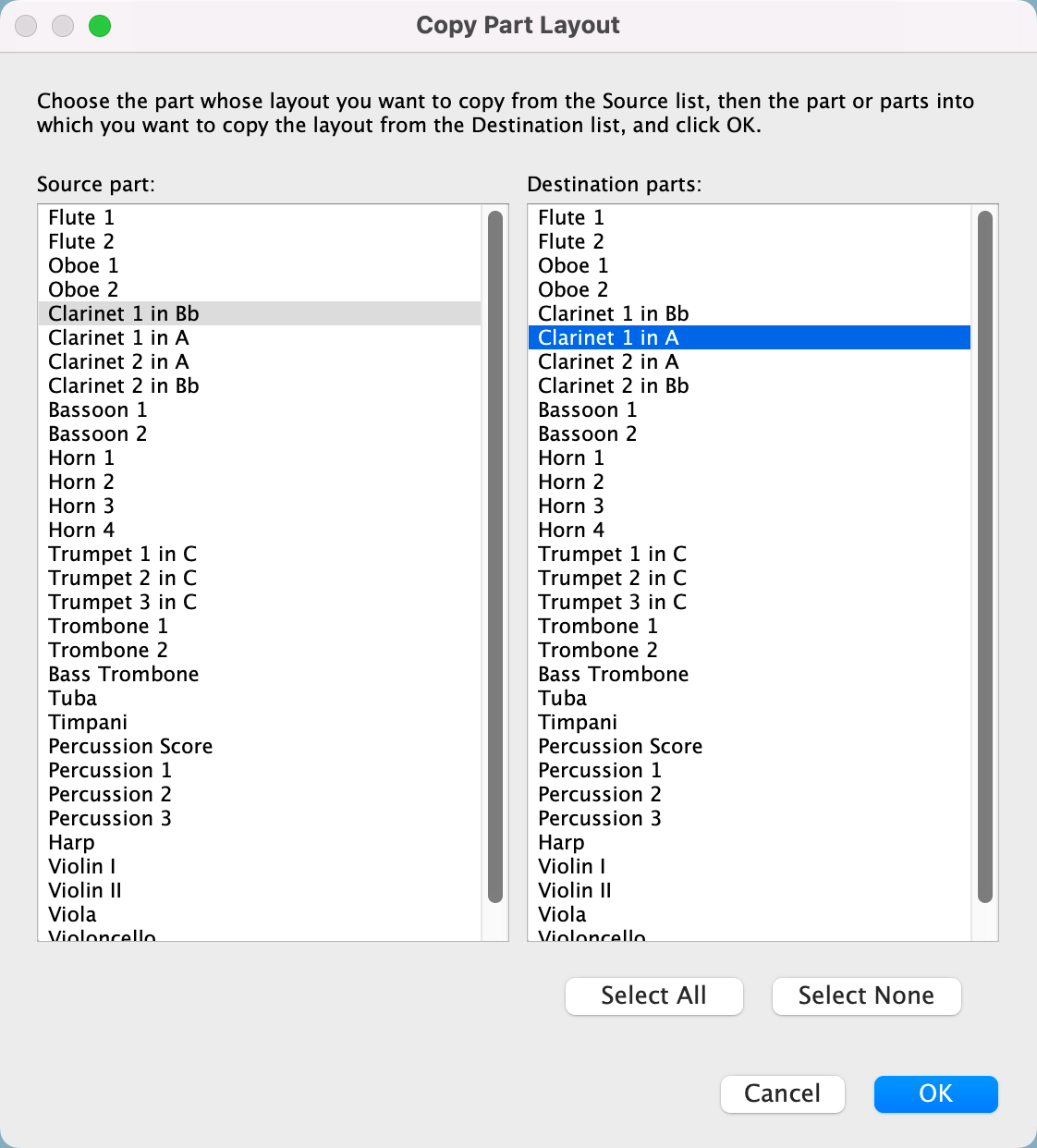 Click OK, and you should find that your new part now very closely resembles the original one in nearly all respects, except for the instrument and its transposition.

Copy Part Layout will also copy over part-specific positioning of system objects, like tempo text and rehearsal marks. This may be desirable, or you may find that you need to adjust these items in your new part.

However, you are able to spell notes differently in each part. If you have any accidentals that you wish to respell in your new part, you can do so by pressing Return, without affecting the other part or the score:

It may be useful to switch on View > Differences in Parts, if it is isn’t already, so that you can keep track of such differences, which will be colored in orange.

Of course, the usual benefits to dynamic parts are available to you, meaning that you can change the position of many elements in one part without affecting the other part or the score, to make fine adjustments.

How are you using this? Did you find this helpful? Let us know in the comments. This post is long enough already, but the concept is similar in other software like Finale and Dorico, so look for another post in the future, where we walk through the steps in those programs.

Interested in the music featured in this post? Check out Quinn Mason’s A Joyous Trilogy for orchestra, available at Notation Central.

There are now more than 250 plug-ins available for download from the Sibelius web site that make all sorts of...

Today was the first day of BETT 2009, the UK’s biggest education technology and training show, which runs until Saturday...