There are times when you want to back up your scores in a different format or work on scores you created in Sibelius in another program. When dealing with individual scores, you can open one and use the commands in the File > Export menu to save it to one of several formats including MIDI, audio, and earlier Sibelius versions.

In Sibelius 7 or later, you can also export in PDF and MusicXML formats. (Prior to Sibelius 7, you could print to a “PDF printer” to produce PDF files, and use the free Dolet plug-in to export in MusicXML.)

But what if you want to work on many scores at once and need to convert folders of scores?

There are a number of plug-ins in the Batch Processing category that can process a folder of scores at one time.

In Sibelius 7 or later, you can install the free downloadable plug-in Export Folder of Scores in Multiple Formats to simultaneously export scores to PDF, MusicXML, MIDI, or an earlier Sibelius version. Prior to Sibelius 7 you can use some of the other plug-ins described below. 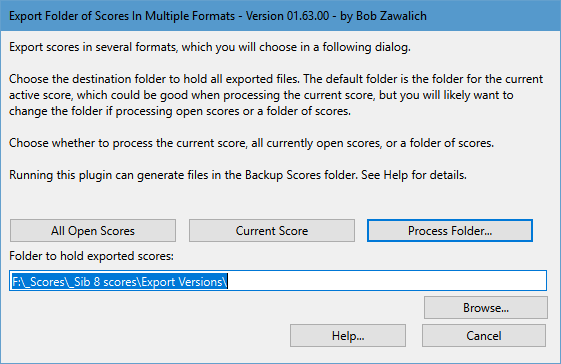 Export Folder of Scores in Multiple Formats was designed to avoid some of the problems common to the previous batch plug-ins. In addition to being able to convert to multiple formats in one pass, if you run it on a folder that contains subfolders, it will produce a matching subfolder structure on the destination folder, so you can have scores with the same name in different subfolders, without them overwriting each other.

The plug-in also avoids a common problem that occurs when you have a folder of scores which were saved in different versions of Sibelius. In most batch plug-ins, files opened in a later version of Sibelius will display a “Save changes” dialog when the plug-in tries to close a score. This won’t happen with Export Folder of Scores in Multiple Formats. 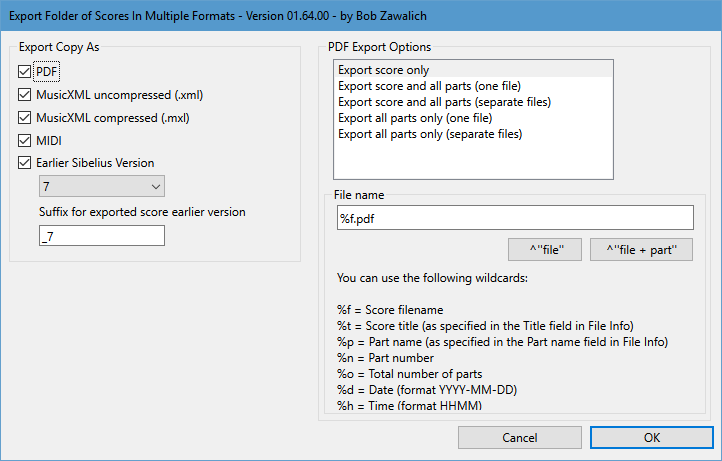 If you want to save to earlier versions of Sibelius, you will notice that the most recent format you can export to is Sibelius 7. In Sibelius itself there are several more recent versions available for export, but plug-ins cannot export anything later than version 7, so it you want to export a folder of scores your options are limited.

Watch out for your Backup Scores!

One unintended consequence of the way many export processes work is that when a score is converted, it creates a copy of the original score in the Backup Scores folder, which normally holds a limited number (currently the default is 200) of copies of scores you have explicitly saved. If you are processing a large folder of scores, these backup files could overwrite all the backup scores you had saved. If might be worth temporarily increasing the number of backup files that are saved if you are going to process a lot of files. Find the name of your Backup Scores folder, and change the number of backed-up scores, in File>Preferences>Saving and Exporting.

Exports to MusicXML and earlier Sibelius versions will generate backup scores, but PDF and MIDI conversions will not. Export Folder of Scores in Multiple Formats will generate a backup score for each score it processes from a folder, and it will delete them only if your Backup Scores folder is in the default location and has the folder name “Backup Scores”. If you see backup files that start with “DELETE_ME” you should feel free to delete them.

In addition to Export Folder of Scores in Multiple Formats, there are a number of plug-ins that will process a folder of scores and export a different type of file. They almost all process the folder specified and any subfolders, and in most cases the files created will be stored in a single folder, even if the original files were in subfolders. This can be a problem if there are scores if different subfolders that have the same name. If that is the case, you may need to process each subfolder separately.

There is also a problem inherent in all plug-ins of this type, which is that, due to a Sibelius bug, files that were previously saved in an earlier version of Sibelius that are opened, processed, and closed without saving will ask if you want to save changes, and you will generally have to say No for every score from a previous version. In defense of plug-in writers, most plug-ins use a Close command that tells Sibelius to close without saving and without a dialog, but it does not work in this case. So be prepared to sit and watch and click No a bunch if you use these plug-ins.

Folders of scores to PDF 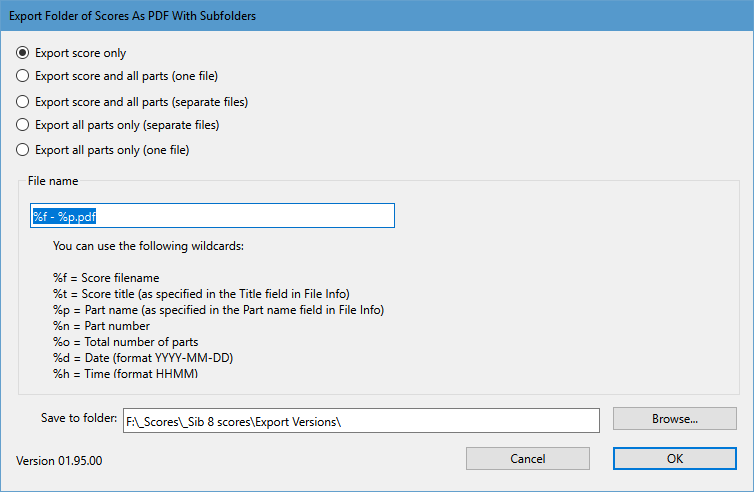 Prior to Sibelius 7 there was no built-in PDF export, so you would print scores after setting up your printer to write to a “PDF printer”. You can still do this in Sibelius 7+ if you like. Both Windows and mac OS have built-in PDF printers these days, but before that you could download and install programs that would serve as printer drivers that would create PDF files. You want to have a PDF printer that does not ask you for a file name on every score, though, or you will spend even more time OK-ing dialogs.

There are several plug-ins that will print a folder of scores. Most are intended to do more than just print a score, so you may have some initial setup to do. 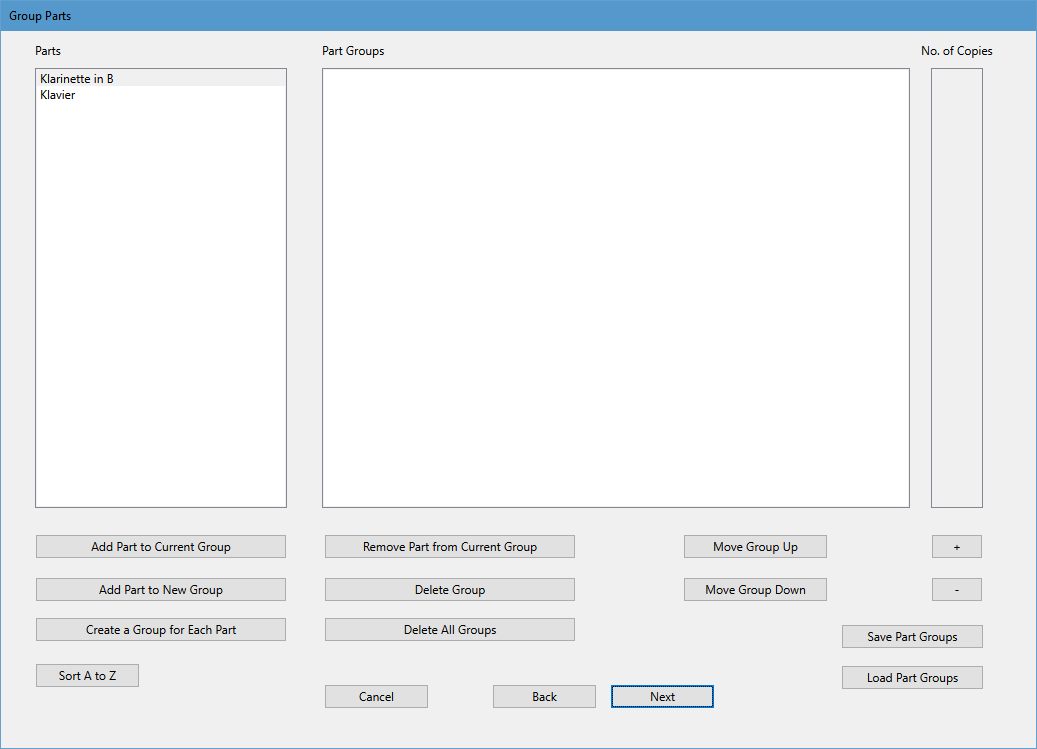 Print Folder of Scores And Parts is another downloadable plug-in: 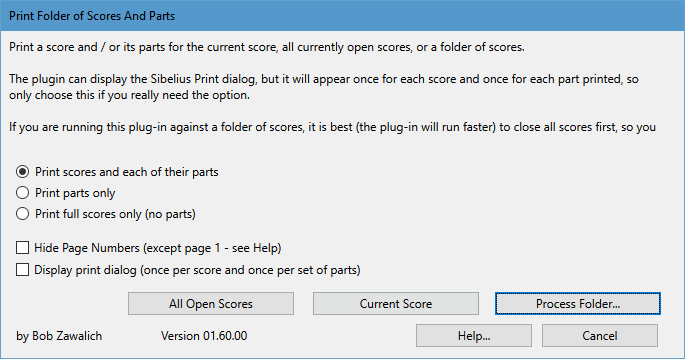 Folders of scores to MusicXML

MusicXML is generally the best way to transfer a Sibelius score to another notation program like Finale, Dorico, or MuseScore (among many others). It retains more formatting that any other mechanism, though some PDF converters also do a good job.

MusicXML export was not available natively from Sibelius until Sibelius 7. In Sibelius 7 or later, the shipping plug-in Convert Folder of Scores to MusicXML will convert each score to either compressed or uncompressed MusicXML. As with most batch plug-ins, the output MusicXML files will all be saved into a single destination folder, so you may need to run it separately on subfolders if they are present.

Michael Good is the inventor of MusicXML, and his Dolet plug-in which imports and exports MusicXML is now available for free. You will need to install it manually; You can find installation instructions on the Sibelius web site, or you can install the plugin Install New Plugin and use it to install the Dolet plug-ins (yes, I know…). Use Dolet 6 and Dolet 6 Batch Export (Translate Folder of Scores To MusicXML) in Sibelius 6 and later. You may find that the Dolet plug-ins will produce MusicXML that imports better into other MusicXML importers than files created by the native Sibelius exporter. It is worth getting a copy even in Sibelius 7+ and experimenting with both methods to see which one works best for you.

Folder of scores to MIDI

Convert Folder of Scores to MIDI ships with Sibelius, and exports files into a single destination folder. There are no user options.

Convert Folder To Earlier Sibelius Version ships with Sibelius, though there is a downloadable versions that runs in Sibelius 4 or 5. The most recent version it can convert to is the Sibelius 7 version, and it can also convert to Sibelius 6, 5, 4, 3, or 2 format. (Plug-ins are not yet able to convert to any version after 7).

Folders of scores to audio

There are a number of options here. These plugins have had a tendency to crash, most likely because they need to load and unload sound files quickly and frequently. The last time I checked they were working reliably, but I suggest running of small folders for best results.

Plug-ins can only export to WAV format for Windows and AIFF for Mac. To export into MP3 you can use recent version of Sibelius Ultimate to export one score at a time, or find a way to convert WAV or AIFF files to MP3.

The downloadable Export Audio Score and Parts can export scores and parts separately. 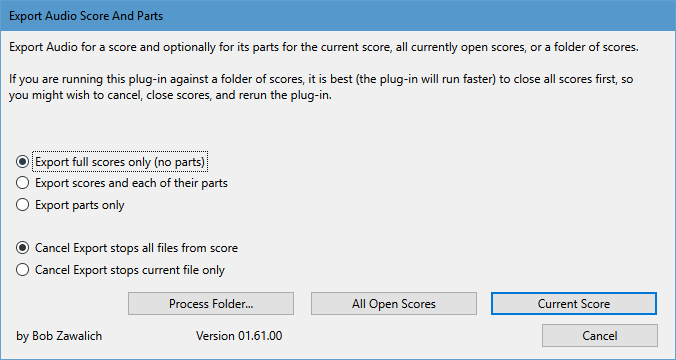 Running other plug-ins with Run Plugin on Folder of Scores

There are a number of audio export plug-ins that export a single score, but you can run them using the plug-in Run Plugin On Folder of Scores if you are patient about clicking on dialogs. These include Export Each Staff As Audio, Export MIDI or Audio with Standardised Settings, and Rehearsal Recordings. 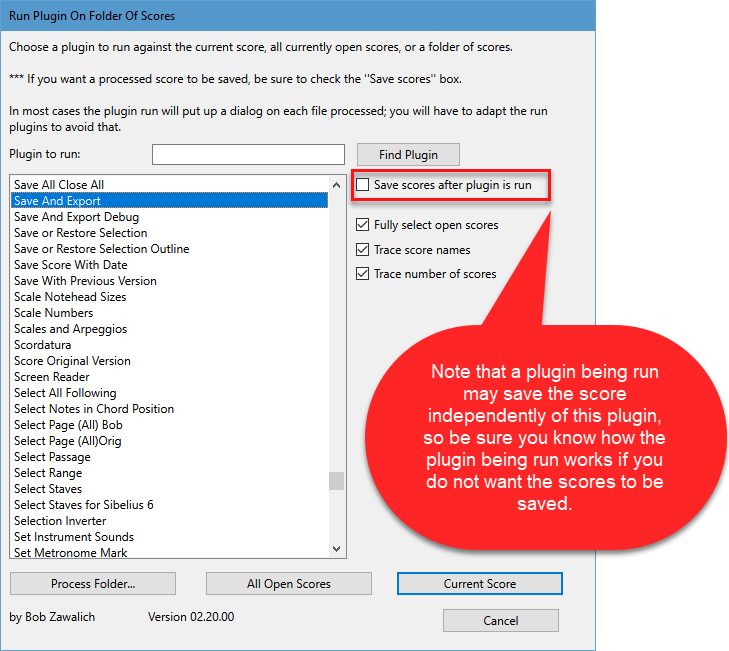 That pretty much covers the available batch export options. Most downloadable plug-ins can be installed in Sibelius 7 or later using File > Plug-ins> Install Plug-ins.

MakeMusic has released Dolet 8 for Sibelius, its latest version of the free plug-in that writes MusicXML files that can...

The sheet music reader Newzik has an ever-growing list of annotative features designed to make the app more useful in...