The Convert LV Symbols to LV Ties plug-in was written specifically to replace LV (laissez vibrer) up and down symbols in Sibelius created by the plug-in Add LV Symbols To Notes. In that plug-in, which is described in more detail elsewhere on Scoring Notes, the LV tie symbols are added at the same rhythmic position (beat) and in the same voice as the corresponding notes. Add LV Symbols To Notes allows you to set offsets from the notes (X and Y in the Inspector), so that it is possible to run the plug-in and not need to adjust the resulting symbols at all.

The new Convert LV Symbols to LV Ties plug-in was commissioned by Philip Rothman for his use on a recent project to take advantage of the new support for native LV ties, and we agreed at the time of commission that once the plug-in was finished, it would be made available for free on the plug-in download page, for the benefit of all users. 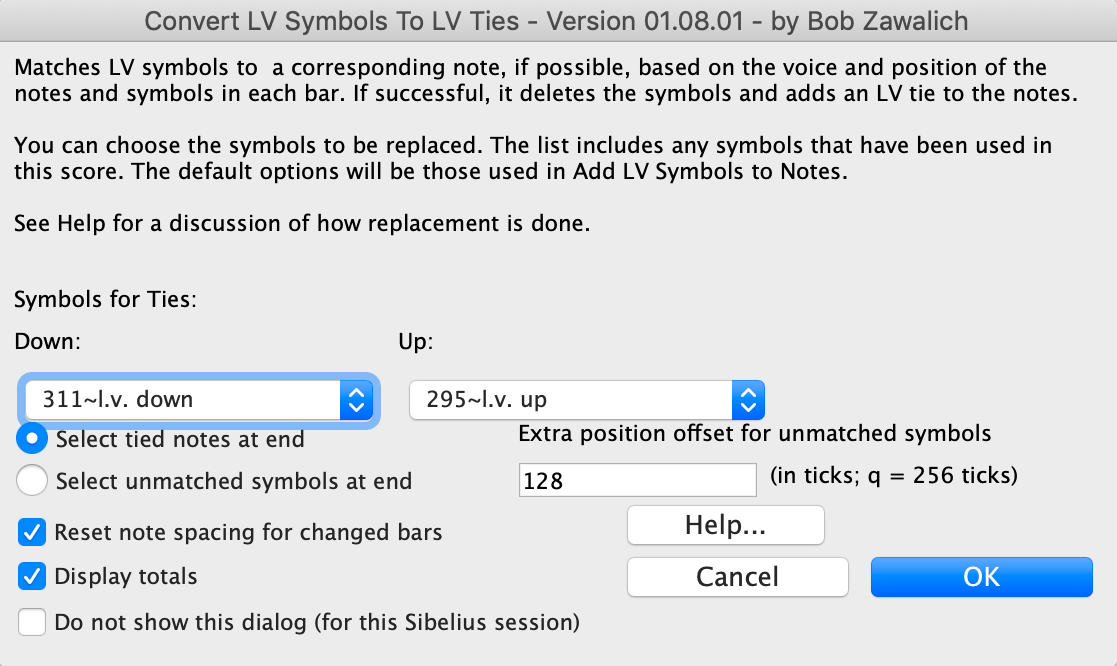 This plug-in will only run in Sibelius Ultimate version 2020.3 or later, when LV ties first became available.

This plug-in tries to match a symbol with a note, and if successful, the symbol is replaced by an LV tie on the note.

Notes and symbols are separate objects, though, and there is no way for a plug-in to know that a symbol is matched, other than by position and voice. So we had to make some approximations to allow most of the matches that would would have made manually.

After some attempts to allow for vertical spacing adjustments, we decided to make the assumption that, if a note or chord and a group of symbols had the same position and voice, and the note/chord had the same number of notes as there were symbols, the notes and symbols were considered to be matched. The symbols were then deleted, and LV ties were added to all the notes at that position and voice. This will therefore not work if only some notes in a chord were tied, but we thought that would be rare enough, and the advantage of matching by position, voice, and number were great enough to justify us matching this way. Matching works great even with multiple voices.

The plug-in makes a first pass on the selection matching and replacing this way, but it keeps track of any symbols that are unmatched.

It was observed that if you selected one of the LV symbols and typed the right arrow key even once, it would change the position of that symbol, rather than just adjusting the X offset. We also we found some scores where some of the LV symbols had been added directly as symbols, rather than by using Add LV Symbols, and these symbols would be added by default in ”all voices”, rather than in a specific voice.

We allowed the position to vary by a ”fudge factor”, and still match. The user specifies the fudge factor, and we determined that a position shift of an eighth note was needed to deal with the one-arrow-key-press, so that became the default fudge factor.

We also changed the matching code in the first pass so that if all the notes in the bar were the same voice, it would match with symbols that were in ”all voices”. So we would only get voice mismatches when a bar had multiple voices, and the symbols were in ”all voices”.

We added a second matching pass, where we looked at the groups of unmatched symbols we had. We decided to consider a match if the group of symbols:

This handled most of the matches except for cases where there were bars that had notes in multiple voices, and symbols in ”all voices”. We decided we would mark these as unmatched symbols, and trace the location of the symbols, and leave these to be corrected manually.

Try the default settings, and see how it goes. The plug-in will trace the locations of unmatched symbols, and you can try other settings, or finish up by hand, as suits your case.

The Convert LV Symbols to LV Ties plug-in can be downloaded directly in Sibelius by going to File > Plug-ins > Install Plug-ins. It is found in the Engravers’ Tools category.

Bob Zawalich, Sibelius guru and plug-in developer extraordinaire, gives us a personal tour of how many new and updated plug-ins...

Let the good times roll with these tips on how to more easily place laissez vibrer symbols in Sibelius and...