On the Scoring Notes podcast, Philip Rothman and David MacDonald talk through a specific printing project and illustrate the various steps along the way to set it up for success. Listen now: 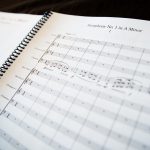 We talk a lot about technology on Scoring Notes. Technology takes many forms, but it’s not just pixels on a screen, or 1s and 0s flying around electronically. Paper is a technology, and a really good one for music. There’s a reason it’s been around for a while!

At NYC Music Services we literally print tons of music each year, for performance and publication, and I’m so lucky to have fantastic clients and colleagues who trust me with their important projects. One of the very best in the business in Jon Senge. Jon’s a Paul Revere Award-winning engraver who has been the go-to music preparer for many music publishers and composers. His shop is called Five Line Productions — a clever reference to the music staff — but it may as well be called “five-star” for the outstanding service he provides.

One of his regular clients is Angélica Negrón, whose unique compositional voice is making an important contribution in a variety of musical genres. Jon recently contacted me to print a set of scores and parts for a new orchestral work of Angélica’s, and he set it up so perfectly that I wanted to share it with Scoring Notes readers, to demonstrate how to make sure that your music gets the attention it deserves, regardless of who is doing the printing.

It all starts with communication. Part of the key to Jon’s success is outstanding communication skills. Ours is a time-sensitive business, and it’s understood that things sometimes happen very fast.

Still, any lead time or advance notice will go a long way towards making sure that your project is taken seriously and approached thoughtfully. In Jon’s case it started with a brief message stating the who/what/when:

In just a few sentences I’m totally on board with what’s needed:

It’s OK if specifics aren’t settled here; we’re just establishing general availability and capability. I understand that the timeframe as well as total page count could change based on how the music comes in, but in principle this all sounds fine. I’m good!

A couple of days later, Jon’s sent the files along with another message. Everything I could hope for is here:

I mean, this project practically prints itself!

Don’t worry about over-communicating. I am always happy to have more information rather than less. So often I need to follow up with one or more of the above items, and while it’s no problem to do so, each volley back-and-forth adds time to the process.

Communication is just the first step. Setting up the files for print is the next and critical step.

Jon sent me a zip file, which works well if you send an email attachment. Sending individual files over email increases the likelihood that a file might get overlooked. (Sending files via a transfer service such as WeTransfer, Google Drive, or Dropbox is also fine, since when you download files from those services, they are automatically zipped).

When I opened the file, I could not have been more pleased to see this:

All the files were there, in score order. On this web site and on our podcast, we’ve talked about the importance of good file naming.

In an article called Creating PDFs from Sibelius 7 from way back in 2013, there are some tips that are still fully relevant to help you automatically generate files this way from Sibelius, by using Sibelius’s “tokens”.

Dorico has a similar function, in the Export File Names Dialog, where you can create a “recipe” for the filename.

You can’t quite export PDF and get the filenames to appear in score order directly from Finale, but you can use a renaming utility like Name Mangler to take care of that for you.

Regardless, Jon’s got it done right, and moreover, he’s also specified the number of copies per file needed in square brackets, if more than one is needed, like Violin I [9]. Sure, he already put that information in his email, but remember what I said about communication? More is better than less. I’m happy to have that additional confirmation, for reasons I’ll show in the next step.

Even the best plans can go awry; a printer can jam, the folding machine misfires. Fortunately, Jon accounts for these circumstances by ensuring that each page of every part has a running header with the title of the piece and the name of the part:

This way, if a page gets misplaced, I know exactly where it needs to be.

Furthermore, all the files are set up correctly for booklet printing. Jon didn’t assume that just because a part started on page 2 (for page turn purposes) that I would know to print a title page. He included the title page directly in the part itself. (See how to do this in Sibelius, Finale, and Dorico, as well as how to fix a common problem in Sibelius.)

This way everything will be automatically “bookletized” (imposed) correctly.

And that’s my favorite part! Thanks to PDF-MusicBinder, the amazing utility originally developed by Abraham Lee and co-commissioned by Robert Puff and me, the tedium of setting up PDF files for accordion-style and booklet printing is now a one-click process:

You can get PDF-MusicBinder from Notation Central. There are other booklet imposers out there, but none that I know of that are specifically adapted to the idiosyncracies of music printing, including the ability to choose either booklet or accordion-style printing that separates 2-ups from 1-ups, and specifying the number of copies per part.

36 minutes after receiving the files, we had a set of two scores and orchestral parts printed and bound, according to specs, with no mistakes. (And I did keep my promise to write a blog post about it!)

On my end, when I packed the music up, I included a packing list for the destination orchestra (in this case, the Detroit Symphony). After all, I couldn’t have Jon be so detailed with me and not hold up the bargain on my end!

This ensures that the receiver knows exactly what should be in the package, and, if something appears to be missing, that there is a way to check for it.

The reason I said “NYC Music Services did not prepare this music and is not the rental agent” wasn’t because I wasn’t proud to be associated with this project — on the contrary, as I would be very happy if I produced this music. It’s because, since NYC Music Services often acts as the rental or sales agent for pieces where orchestras are instructed to return the music to us, that in this case the orchestra knows that they are receiving music that’s from us but printed on behalf of someone else.

…where it joined the three other projects also getting shipped that day. What a way to end the week!

In Finale you can use up to four different independent lines of notes and rests, known as “layers”, per bar....

A live video presentation of the Scoring Notes podcast on the topic of music notation software is just one of...