To remedy this, the Chord Symbols As Polychords plug-in allows polychords to be made up of Chord Symbol objects. It takes pairs of selected chord symbols or legacy chord symbols and stacks the first of the pair on top of the second, separated by a text object made of underscore characters in the Chord symbol text style.

Since the plug-in will treat successive chords as a pair, you should be careful to only select chords that you want to be made into polychords.

You may need to adjust the dialog settings for different chord fonts. The plug-in supports Sibelius’s native chord symbol fonts Opus, Inkpen2, and Reprise, as well as the third-party fonts Norfolk and Pori, available for free from NYC Music Services.

The settings, except for Chord font family for separator length, are saved across Sibelius sessions.

How to use the plug-in

Polychords are three separate objects which can move independently. Magnetic Layout is turned off for all three objects. It’s important to not use Reset Position on the chords or text line, or the three elements will end up overlapped.

Here is an example of some chord symbols (the LLL, LD, and LN chords are legacy Text objects). Note that, because Magnetic Layout is turned off, some chords which used Magnetic Layout to avoid notes will be too close to the notes after conversion to polychords, and will need to be manually adjusted (but not with Reset Position!) It is usually better to adjust the position of the chord symbols to avoid the notes before running the plugin. 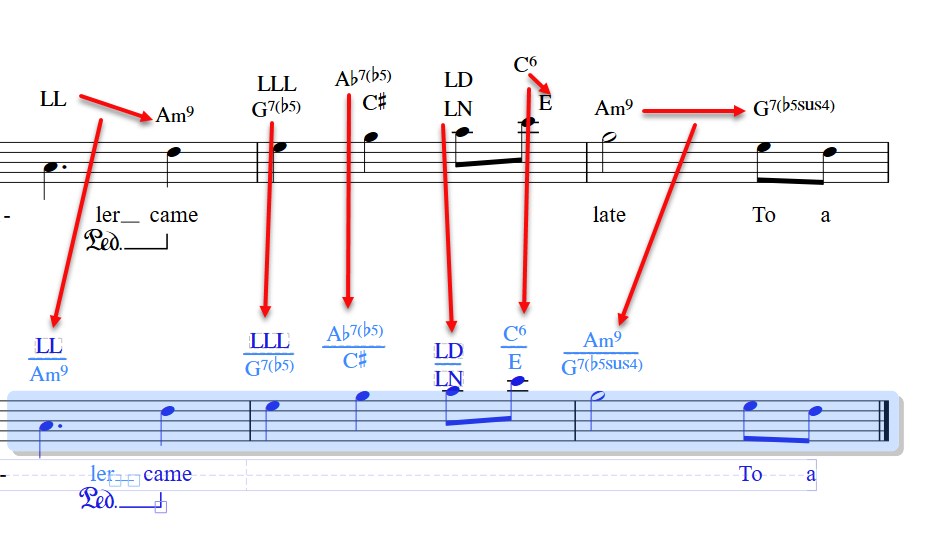 Usually you will not have to worry about how the chords are positioned, but this discussion may help if they are not going where you want them to.

You can adjust the gap between chords, and adjust the position of the separator line.

The defaults work pretty well for scores that come from standard house styles, but if the chords or separator overlap you will need to experiment with the dialog options to find a good spacing. You should select a representative pair of chords and:

The plug-in looks at pairs of chord symbols, and considers the first chord it finds to be the top chord, and the second chord to be the bottom chord of the resulting fraction.

Chords are sorted by staff, bar, and position in the bar, followed by the Y position (highest first) and X position. If you are stacking chords be sure that there are at the same rhythmic/beat position and put the top chord above the bottom chord.

It is tempting to think that a line would be better than text as a separator, but lines do not have a fixed length; they can shrink or grow as a score is reformatted, and this can lead to unpleasant surprises.

Reset to Defaults will fill the edit boxes in the dialog with the default spacing values, which can be handy if you have tinkered with the values.

If you run Reset Position on a polychord, it will collapse into a pile over overlapping objects. Repair will attempt to rebuild a polychord when it finds two chord symbols and a separator line at the same position. It cannot tell which note should be the top chord, so it just chooses the first chord symbol it finds, so you may find repaired polychords have been reversed, or the base position is not what is desired, and you will need to fix them manually. Repair is a tool of last resort.

Since polychords are made of three objects, you need to be careful not to drag the objects apart. It is tricky to select the objects as a group, especially because the separator can be hard to click on.

Probably the easiest way to select a group is to click near one of the chord symbols with the Shift key held down on PC, or Command on Mac, and then drag with the mouse. The Sibelius Reference calls this a “marquee” or “lasso” selection. Thanks to Robin Walker for suggesting this option. 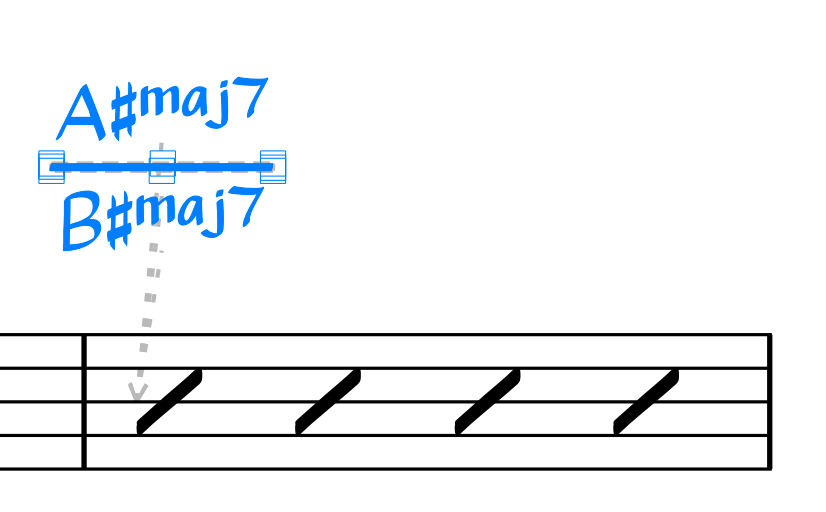 You can select one of the objects and use Ctrl-Tab (PC) or Command-Tab (Mac), or Ctrl-Shift-Tab (PC) or Command-Shift-Tab (Mac) to select the other objects in the polychord, but this is trickier than it seems. The order of tabbing changes if some of the chord symbols are legacy symbols, so it takes some experimenting to get this to work.

You can filter polychords using the Filter With Deselect plug-in, using the option Chord Symbols – All. Assign a shortcut to this plug-in and run it without the dialog if you want to copy and paste a number of polychords.

Chord Symbols As Polychords will select any newly created polychords to make it easier to copy them immediately after the plugin is run.

Chord Symbols As Polychords was inspired by the work that Bernie Cossentino and Jeff Kellem did for the Norfolk and Pori chord fonts.

It can be downloaded directly through Sibelius 7 and higher at File > Plug-ins > Install Plug-ins > Chord Symbols. Users may also install it manually in Sibelius 6 or higher by visiting the plug-in download page and following the usual manual installation procedure, or by using the Install New Plug-in plug-in.

It hardly seems possible it was six months ago that I posted a list of five essential plug-ins for Sibelius....