One of the simplest ways to make your scores stand out from the crowd is to adjust the fonts used. Sibelius makes it really easy to change music fonts at any point in a project, and there are two ways to do it.

The simplest way to change the music font used by your score is to choose House Style > Edit All Fonts, which shows this dialog: 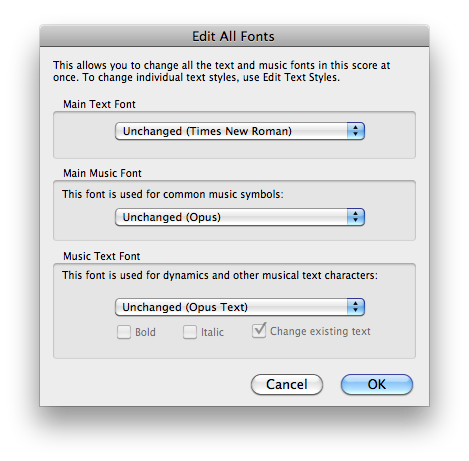 Click the Main Music Font menu to see a list of all of the compatible music fonts you have installed on your computer. By default, you’ll see Opus, Inkpen2, Reprise and Helsinki, which are the four families of fonts that are supplied with Sibelius. If you have other compatible music fonts installed – such as Maestro, Petrucci, Sonata, and so on – these will also appear in the list. To change the music font, simply choose a different entry in the list, and click OK.

This is good, provided the music font you are changing to is of a similar character to the one you were already using. Changing, say, Opus to Helsinki in this manner works fine, but changing Opus to Inkpen2 doesn’t work so well. That’s because in order to look good, you may sometimes also need to adjust certain other aspects of your score’s appearance, which brings us to the other way of changing music font.

When you want to make a radical change in the music font used in your score, e.g. going from an engraved appearance to a handwritten one, you should import a house style rather than simply using Edit All Fonts. That’s because house style libraries can change more than just the appearance of symbols like noteheads, clefs, accidentals, and so on: they can also change the thickness of lines, fonts used by various text styles, and other things that can have a subtle but important impact on how congruous the score as a whole appears. 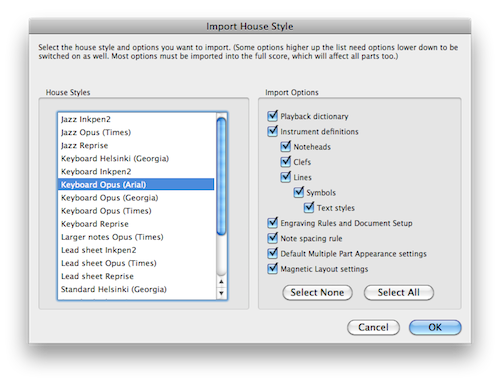 Choose a house style that includes the name of the music font you want to use, and click OK. You may need to go to Layout > Document Setup afterwards to check or reset the page and staff size afterwards.

What’s in a font?

You might be wondering what the differences are between the various music fonts supplied with Sibelius.

Opus is a modern engraved music font, which is used in most of Sibelius’s default manuscript papers and house styles. Helsinki is a more traditional, old-fashioned music font, with narrower, rounder noteheads (allowing slightly tighter spacing), and elegant, more ornate markings such as braces, trills, pedal lines, and so on.

Inkpen2 and Reprise, by contrast, are fonts that have the appearance of handwritten music. Inkpen2 looks as if it was drawn with a thick-nib ink pen (hence the name), while Reprise combines notes drawn with a thin-nib ink pen with Letraset-style stamps for titles and so on. (Trivia: Reprise is so named because it is similar in appearance to the old hand-copied parts used for Nelson Riddle’s arrangements for Frank Sinatra, whose record label, founded in 1960, was called Reprise.)

Careful use of music font can add an extra dimension to the presentation of your score. Experiment with different fonts to see which fonts you like best for which kinds of projects: you can always undo if you don’t like something you end up with!

Judging from the interest in the Bravura font, the pre-release version of the font to be included with Steinberg’s new...

Sibelius includes four complete families of music fonts as standard, each of which has a slightly different look. Opus, the...