In the first update to Sibelius 8 back in January of 2016 — more than a year ago — Sibelius 8.1 added support for automatically handling rests in multiple voices, and Sibelius 8.2 improved the position of interpolated bar rests.

This helpful feature introduced a problem with files created in earlier versions, however. If you created a file in an earlier version, such as Sibelius 7.5, in which rests were manually moved to avoid notes, you may notice that the position of those rests has shifted in the parts for your file, with no warning.

Compare the position of the rests in this portion of this drum part, in a file created and opened in Sibelius 7.5.1: 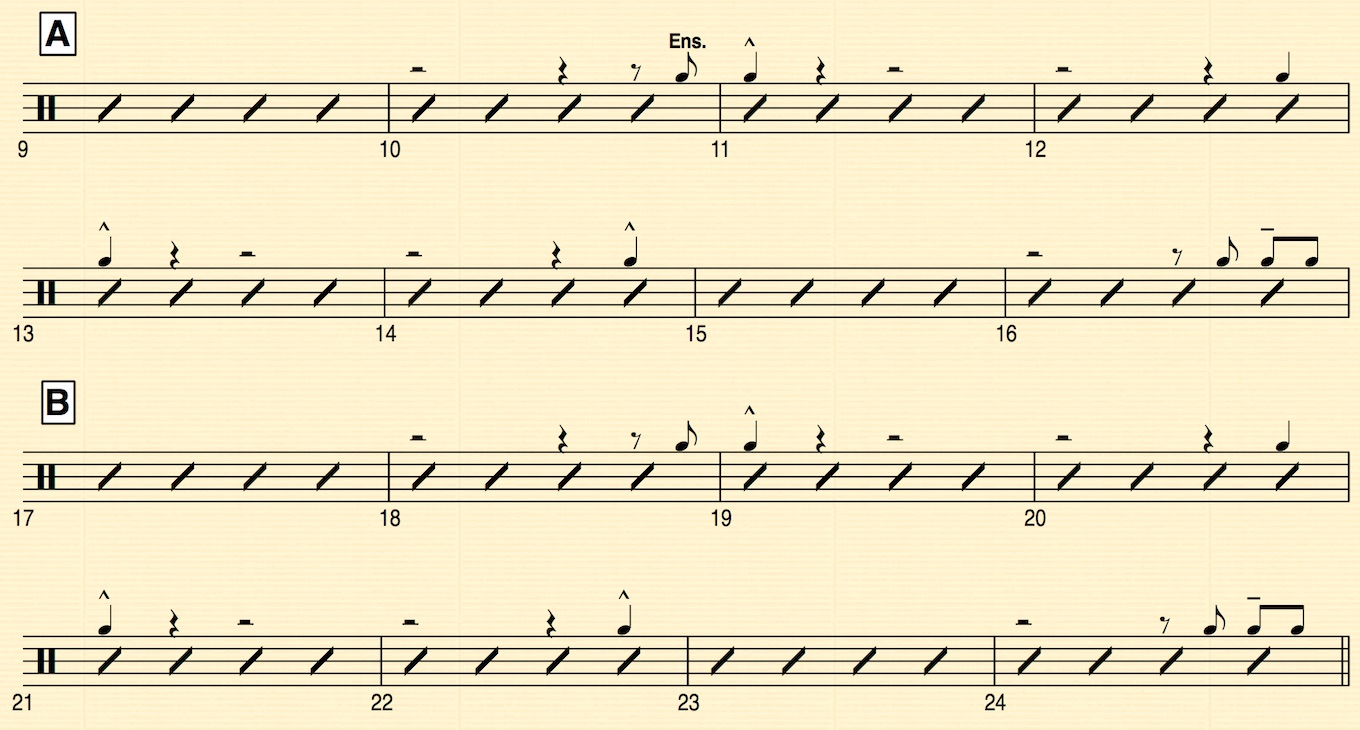 With the position of the rests in the same file opened in Sibelius 8.5.1: 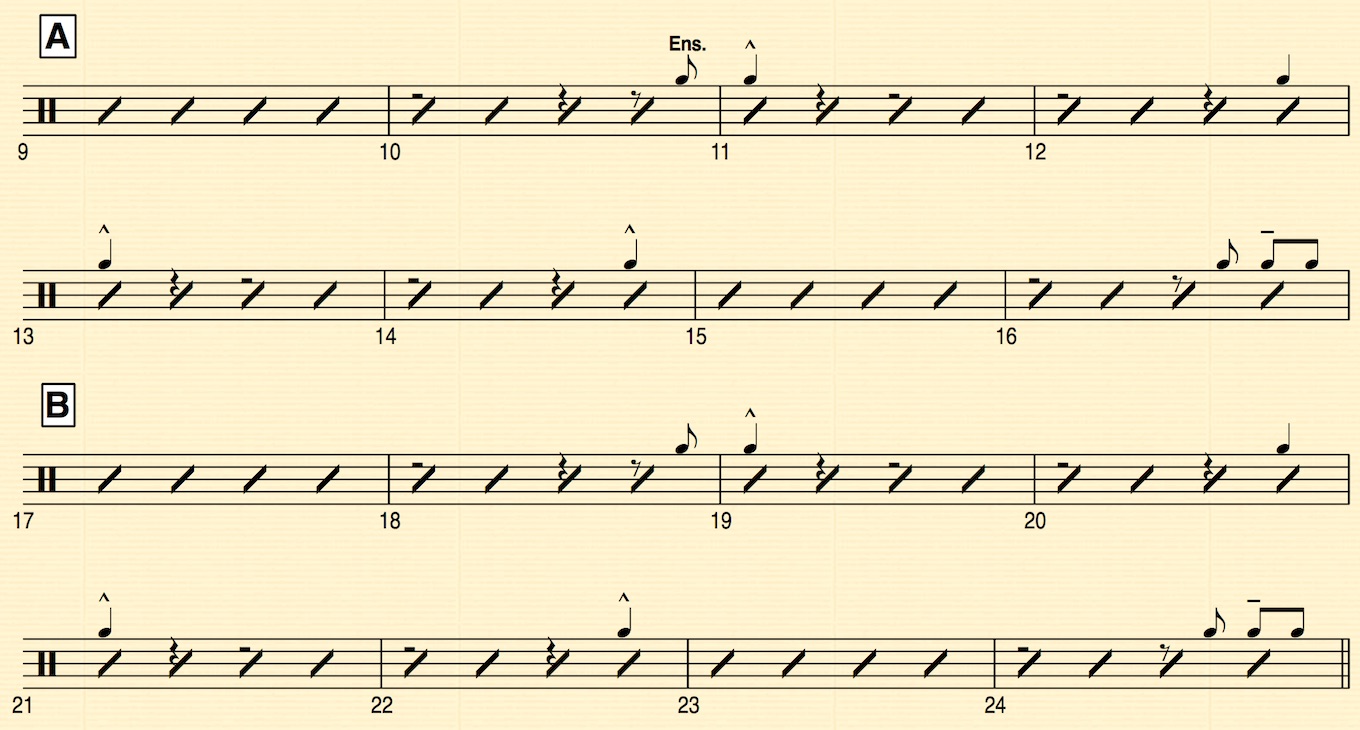 Here is another example with cues in a flute part, from a file created and opened in Sibelius 7.5.1:

Curiously, in each case, the position of the rests in the score is identical in both Sibelius 7.5.1 and 8.5.1; it’s only the parts which seem to be affected by this problem.

Here is the portion of the score for the earlier-mentioned drum part, opened in Sibelius 8.5.1, with Rests avoid notes in other voices switched on — the default setting. Remember that this score was created in Sibelius 7.5.1 so the rests were manually moved:

Unchecking Rests avoid notes in other voices will produce this result:

This is quite a mess, and it’s compounded by Sibelius 8.5.1 switching on the Rests avoid notes in other voices setting without warning for scores created in an earlier version.

For comparison, upon opening a file created in a version earlier than Sibelius 6, you will be presented with a dialog offering a number of options, with an explicit warning that “the appearance of your score will change as objects will be moved to avoid collisions.” 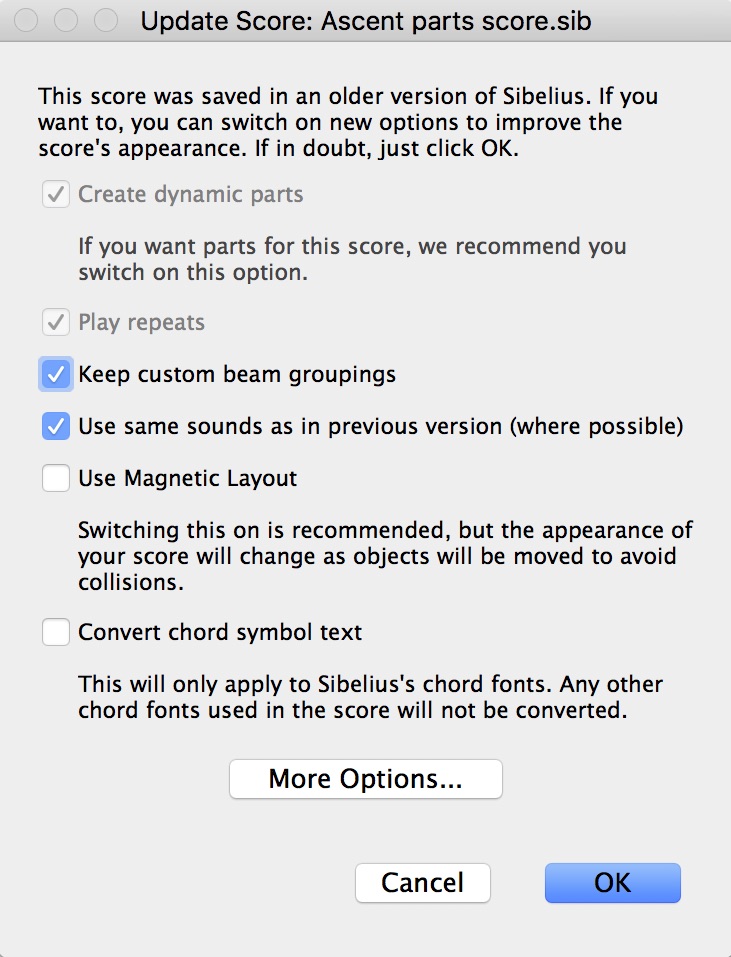 Further, if More Options… is clicked, a long list of options is presented. Options are disabled if the feature was already implemented in the file being opened. 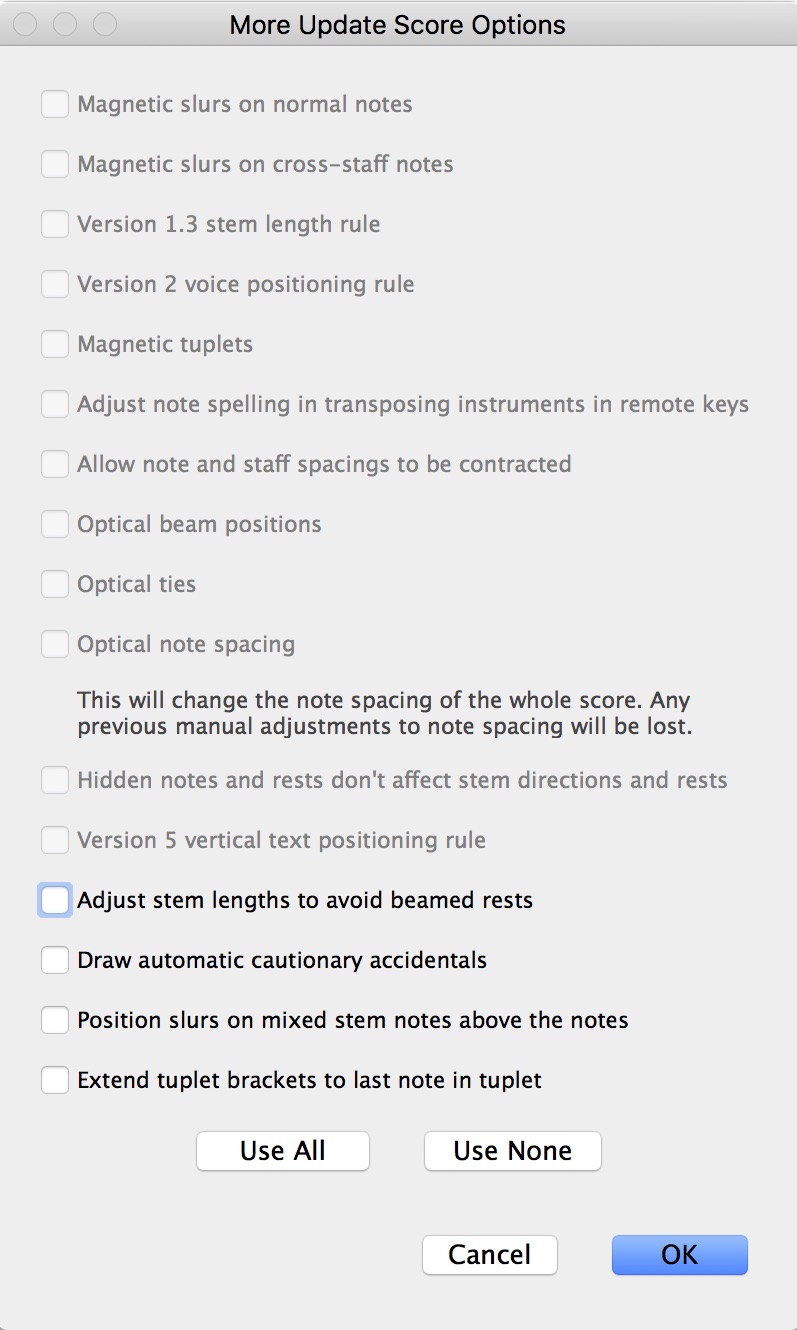 This thoughtful approach put the user in control of how much he or she wished to immediately apply any new features in an existing file. The goal was to not change the appearance of existing scores where careful work was already done, and the default was always to keep things exactly as the were, leaving it to the user to make a considered decision.

This dialog still appears in Sibelius 8.5.1, but selecting the rest avoidance feature is not available as an option, and if your file was created in Sibelius 6 or later, you won’t see the dialog at all — meaning that the appearance of your file could very well change without you being aware of it.

No doubt it’s a challenge to maintain compatibility with earlier versions while introducing new features, and surely the task of maintaining a large base of legacy code is no small one.

But users should have the option of choosing whether or not a feature as disruptive as the automatic rests feature is switched on in scores created in earlier scores. It should be included in a warning dialog and/or and the default setting for these scores should be that the feature is switched off so that when the user opens the file it continues to behave as it did in an earlier version.

Until or unless this flaw is corrected, pay extra careful attention if you routinely work in Sibelius 8.5.1 with files created in earlier Sibelius versions.

Sibelius 2020.6 brings a more sophisticated method of importing MusicXML files directly into a pre-existing template. There are new options...