Last week’s Sibelius 8.5 update introduced the ability to have different staff sizes for any instrument on a per-system basis, and a re-designed Inspector.

Less noticed were a number of important bug fixes, and while I listed them near the end of last week’s post, it’s worth covering a few of them more explicitly — as well as a couple of new ones that cropped up.

At the end of the post, there’s a new plug-in that addresses a bug and improves the process of applying rehearsal marks and double barlines together.

In all previous versions of Sibelius, creating an instrument change (Home > Instruments > Change) to facilitate this mid-system could cause a performance problem, and there wasn’t really any good solution other than some clever fakery. That’s because Sibelius didn’t display the key signature of the piece along with the instrument change until the next system:

Playing it back on the computer sounded correct, but those cross-relations in live performance would not be very pleasant!

Sibelius 8.5 has straightened out this problem, so that the key signature is properly displayed along with the instrument change, like it would be on a pitched instrument staff:

The odd situation involving a key signature, instrument change and a mulitrest still remains, but at least there’s a workaround for that one.

A related issue: If you were happily going along entering notes via MIDI input in the snare drum staff and getting nice audio feedback, switching to glockenspiel would render that feedback silent. You’d still see the notes, and if you click them, they’d sound, but all was quiet when entering via step-time — at least prior to Sibelius 8.5.

Now, in Sibelius 8.5, you’ll hear the notes during step-time during such a change — helpful indeed.

Ever since the Timeline was introduced in Sibelius 7.5, it’s had its share of fans and detractors. Fair enough. But the detractors were particularly irked because Sibelius would always display the Timeline when opening a score.

Now, adjusting the settings in File > Preferences > Files > Window Sizes and Positions should work more reliably, if you hide the Timeline and then click Set Custom Size and Position: 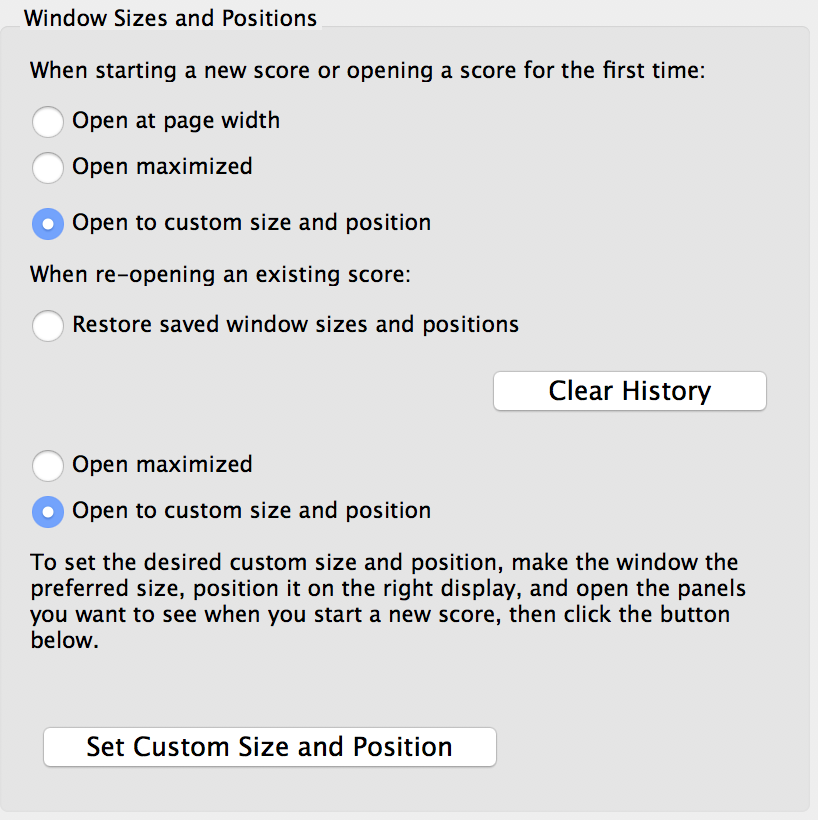 This sometimes worked in earlier versions, but was not as reliable.

A problem surfaced in macOS Sierra where certain shortcuts involving the Command key didn’t work. Although it would be nice if Apple could resolve this for those still using Sibelius 7 or 7.5, thankfully Avid patched the Sibelius 8.5 update to resolve it for the current version.

Unfortunately, at least a couple of new bugs have cropped up in Sibelius 8.5.

The Append Score feature (File > Append) seems to crash Sibelius for all users on Mac and Windows, for any score, likely a result of the changes made to the new staff size feature. Avid has acknowledged the problem and has promised a fix soon.

The new Inspector is suffering a teething problem where the playback settings for tempo lines such as rit. _ _ _ and accel. _ _ _ are not respected and revert back to the defaults. This bug has also been logged.

If you rely on either of the above features and haven’t yet updated to Sibelius 8.5, consider holding off for the moment until a patch is issued.

A new plug-in workaround for an existing bug

Especially in commercial charts, it is customary to have rehearsal marks and double barlines coincide. In Sibelius 7.5 and earlier it was possible to select both the rehearsal mark and the double barline together, hold down Alt (Option on Mac) and click to quickly apply the combination.

Sometime in Sibelius 8, though, this broke so that applying the combination resulted in the double barline appearing one bar after the rehearsal mark.

At the suggestion of Sibelius user Adrian Drover, yesterday Bob Zawalich created a plug-in that addresses this problem and also improves the process, so that a rehearsal mark and double barline can be applied simultaneously (most efficiently with a shortcut). It’s called Add Rehearsal Mark Plus Double Barline and can be downloaded directly in Sibelius from File > Plug-ins > Install Plug-ins in the Other category.

Bob describes the plug-in on the Sibelius forum. Even if this bug is eventually repaired, it will still be a good tool to have on hand if you do this type of thing frequently.

If you already have existing barlines in your score and simply want to add rehearsal marks to all of them, you’ll want the similarly-named Add Rehearsal Marks to Double Barlines by Neil Sands, available in the Other category.

Edit: 2:55 pm — After this post was published, Bob Zawalich changed the name of the plug-in and its category. This post has been updated accordingly.

The Sibelius 8.5 update introduces the long-awaited ability to change the staff size on a system-by-system basis. A refresh of...