All keyed up: Going keyless in your score - Scoring Notes
Skip to content

During my conversation on the SoundNotion podcast several weeks ago with hosts David MacDonald and Sam Merciers, we touched on a persistent notation problem we encounter when working with scores from well-meaning students or collaborators: a piece written in C major or A minor is not the same thing as one with no key signature.

Now, they may look the same on first blush. Say you’re setting up a new score in Sibelius and want to get right on with composing in concert pitch. You see your options in the Quick Start, choose No key signature and are presented with three options, all of which may seem similar: 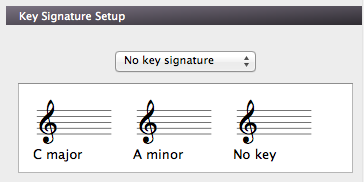 Although they look alike, your choice has important ramifications: if you choose C major or A minor, any transposing instruments (like B-flat Clarinet) will display their transposed key signature (like D major) in a transposed score or a part. If your piece is really truly in a key signature, this will be exactly what you want.

But if your intent is to not have any key signatures anywhere, in any instrument, as is often common when composing film scores or atonal music, you’ll need to choose No key (sometimes this appears as Open key/atonal in earlier versions of Sibelius), lest your music be littered with unnecessary naturals.

If you’ve already set up your score with a key signature and wish to change it later, no problem: simply type K to call up the Key Signatures gallery, choose Atonal/No key, and click the first bar of the score (or the first bar of where the open key is to begin).

You can, of course, mix keyed passages and keyless passages in the same score. Doing so is nothing new; Igor Stravinsky and Aaron Copland are just two of the many composers who have found it useful to do this.

Do you use Finale? Until Finale 2014, the option for an open key didn’t exist. Workarounds were possible but time consuming, especially if you needed to alternate the key signatures in the same score as described above. Fortunately, Finale 2014 introduced the Keyless signature option, along with full MusicXML support.

Choosing this option, either upon initial score setup or later in the composing process, works much the same as choosing Atonal/No key in Sibelius.

MuseScore users aren’t out of luck, either. MuseScore 2 added an Open/Atonal option, which shows as a non-printing “X” in the key signature palette to distinguish it from C major/A minor. If you don’t see it, be sure that you have selected the Advanced palettes. 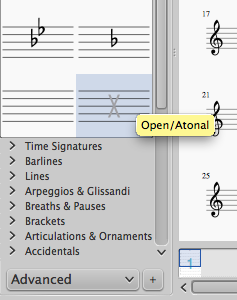 In this follow-up post, we cover how to show key signatures on some staves but not on others.

Along with a bit of history behind the convention, the how and why to use and create instruments that don't...

We'll take you through each step in modifying your document to achieve a classic lead sheet look by removing clefs...