Bob Zawalich just keeps coming up with ways to make our lives a little less tedious, at least when working in Sibelius. He’s recently created two new plug-ins that may save you time on common tasks while working in some scores.

The first of these plug-ins, Retract Line Ends, pulls back the right end of lines that end at the start of the next bar. The line will then terminate at the end of the previous bar. The plugin can process hairpins, octave lines, trills, and ending lines, and it can work on any or all of these types at once, in one step turning this:

This is especially helpful when working on scores created in Sibelius 4 and earlier, where the problem of the hairpin extending over the bar was a Sibelius default, resulting in hairpin “stubs” at the beginning of systems (like at the start of the first example), and in scores created before Sibelius 8.1, which fixed the problem of repeat ending lines being too long by default.

The second new plug-in, Replace Symbol, simply replaces one symbol with another in the score. Amazingly, this was not possible to do in Sibelius until now. According to Bob:

The symbol name is cases sensitive and must be typed exactly as defined in the Insert Symbol dialog. Note that some symbols have the same name, and this plugin cannot differentiate between such symbols.

Handy in a case, say, where a composer meant to write a snap pizzicato, but instead used the symbol for thumb position: 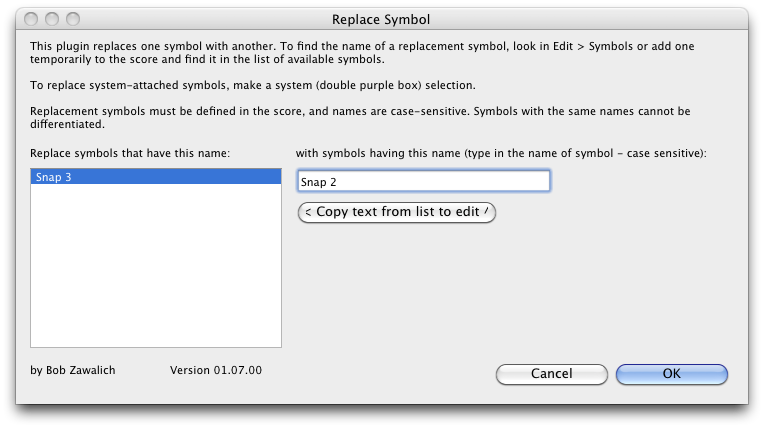 And the result is:

Replace Symbol is available for download here, or directly through Sibelius 7 at File > Plug-ins > Install Plug-ins > Other.

Thanks, Bob, for make all of our lives a little easier and allowing us to get out and enjoy the sunshine once in a while!

It hardly seems possible it was six months ago that I posted a list of five essential plug-ins for Sibelius....