Odla, an input device that "touches" the music - Scoring Notes
Skip to content

Despite all the developments users have seen in music notation software and related technologies, the ways we actually get notes into the software hasn’t changed much in the last couple decades. Odla, an Italian music technology startup, is changing that with their new hardware controller for MuseScore and Dorico.

While other input devices rely on an instrument-style controller like a MIDI keyboard or “music alphabet” shortcuts on a computer keyboard, Odla directly models the five-line staff itself. The bright red staff-line buttons make Odla look pretty cool, and the connection between input and notation was obvious and intuitive from the moment the device hit my desk. As Odla’s tagline goes, it is “music you can touch”. 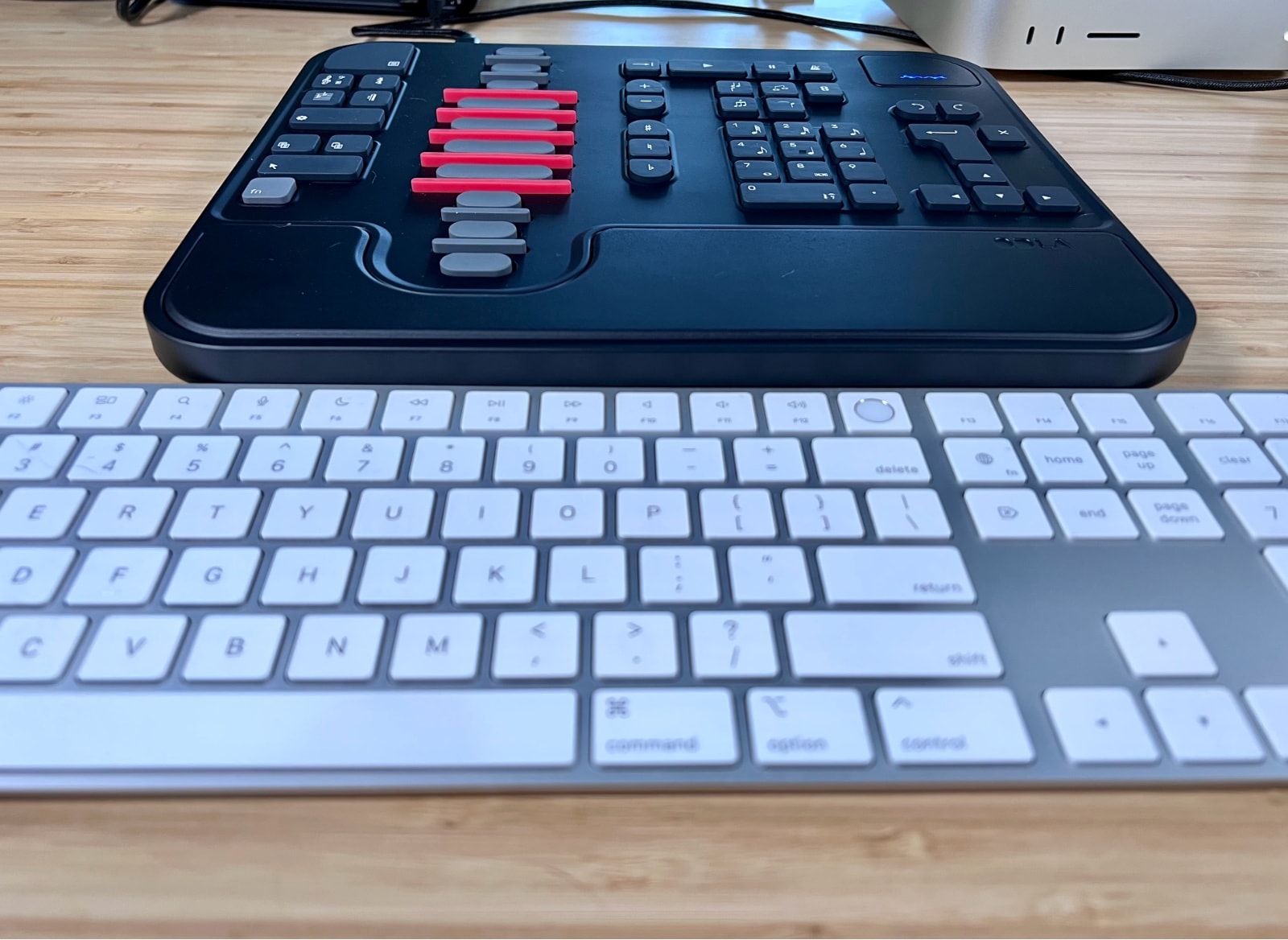 (Disclosure: Odla has provided this device to Scoring Notes for review.)

The device itself is similar in size to my 13-inch MacBook Pro, but a little bit thicker and a little bit longer front-to-back. It’s made of solid black plastic and feels sturdy. The device itself comes with a simple cloth carrying bag and a very nice braided nylon USB cable, and while I’m happy that the Odla device itself has a USB-C port, I’m a little disappointed that the cable has an older USB-A plug at the other end. I would have preferred to see a more forward-looking USB-C to USB-C cable in the box.

The buttons on Odla are solid and feel like typical membrane switches underneath. The staff line keys feel a bit weird to press; because of the long, skinny shape, there is a lot of “play” front to back. Having said that, in my testing, I never had a keypress fail to register in the software.

The staff buttons aren’t labeled, but the rest of the buttons are all screen-printed with various glyphs, some of which are more clear than others. To the left of the staff are several buttons that can be used to change Odla software settings, controls like copy and paste, and to enter more global score elements like clefs and key signatures (more on those in a bit).

To the right of the staff lines, you can find buttons related to note input, like accidentals and rhythm durations. These keys are just a tiny bit smaller than the keys on my full-size alphanumeric keyboard, and they are shaped and arranged in a way that makes it very easy to orient by feel. There are also controls for transport (playback and navigation), voices, tuplets, chord entry, ties, and my personal favorite: hardware undo and redo! As intuitive as the staff notation buttons are, I also recommend having the manual at hand while using Odla, as many of the controls are a bit less obvious.

I find the arrangement of the numeric/rhythmic keypad to be particularly strange. It is shaped like a computer keypad (with a double-width 0 key at the bottom), but it is arranged in the order of a phone keypad, with the 1–2–3 keys in the top row, rather than the bottom. It is also printed with the number-rhythm relationships from the MuseScore keyboard shortcuts. This isn’t particulalry helpful in MuseScore, since the rhythms are arranged in a row (unlike the Sibelius-style, on-screen keypad), and in Dorico it continues to confuse me. Considering that the device is not sending keyboard messages, but rather direct remote control to the notation software, I would greatly prefer to not have the numbers printed on the keys and to only see the rhythm values.

As I mentioned above, Odla does not emulate keyboard shortcuts. Instead it connects to a controller application that communicates with notation software. When you download this software—which is available for both Windows and macOS—from the Odla site, you get two things: (1) the controller application itself and (2) a special, Odla-specific build of MuseScore. While I applaud the creativity of building their own “hooks” into open-source MuseScore, I’m concerned that this would always put Odla users at least slightly behind the main MuseScore releases. It also doesn’t strike me as particularly sustainable for a small company like Odla to maintain their own fork of a large open source project like MuseScore indefinitely. The Dorico support, on the other hand, will work with any version of Dorico from 4.0 onward using the same remote control tricks as Notation Express for Dorico.

After installation, Odla asks you to select which software you’d like to use it with. This is important, since like Notation Express, Odla can control your scoring application even if it’s not in focus (the frontmost application). Otherwise, if you happened to have both Dorico and MuseScore open at the same time, you’d send duplicate messages. Once you tell Odla which app you’d like to use, it launches the app automatically. On future launches of the Odla app, it will launch the corresponding scoring application as well. I’m not sure why, but this bothers me. I would prefer to launch the application on my own.

Using Odla for basic note entry, it behaves exactly as you might expect. One caveat: input is always duration before pitch, regardless of the current setting in (in my case) Dorico. That’s not an issue for me, as that’s the way I usually use Dorico, but those used to selecting pitches first may find this limiting. I was often tempted to try to enter chords by pressing several staff keys simultaneously, but that also is not supported (just as it wouldn’t work to press two letter keys on the keyboard). Rather, you’ll need to use Odla’s chord key to toggle chord entry.

The basics of rhythmic values, notes, and accidentals are pretty obvious, but there are plenty of clever tricks included with Odla as well. Several of the keys to the left of the staff buttons can serve as modifier keys, much like the shift or control keys on your QWERTY keyboard. That opens up a new, Odla-specific set of keyboard shortcuts. For example, holding the select (cursor arrow) button and using the arrow keys expands a selection, just like shift-arrow keys on a standard keyboard. Hold fn and the + and – keys to add and remove measures. Hold select and press 0 on the keypad to change the rhythmic grid. Some of these shortcuts are the same in both Dorico and MuseScore, but there are some (like the rhythmic grid shortcuts) are application-specific. I found the shortcuts very handy, but not particularly guessable, which is why I recommend using Odla with the manual nearby.

You can access even more input features using the gear (⚙) key as well, which Odla refers to as the Additional Features key. Pressing it opens the Odla panel, which is provided by the controller app and floats on top of your other application windows. The panel presents a 3×3 grid of submenus that can be selected with either Odla’s number pad or arrow keys. Some of these, like dynamics and articulations, place symbols directly into the score. Others, like metronome markings, require further input from the Odla or a text keyboard. Entering dynamics this way is a bit clunkier than Dorico’s Shift-D dynamics popover because it requires scrolling through several pages of the Odla panel, but it does allow the user to keep their hands on the Odla and not switch to another input device.

The Odla panel took some getting used to for me. For one, it can’t be clicked or dragged or interacted with in any way other than to press keys on the Odla hardware. I found this confusing at first because it looks very clickable! Second, the location of the panel is not particularly flexible. It can only appear in one of nine locations, and only on your primary display. There is no way to move Odla to another monitor. Last, some of the panel’s English text is misspelled. This last is a very minor gripe, but it is a good demonstration of the ways in which the software feels a bit rougher than the hardware. Despite that, I’d much rather see issues with the software, which has the possibility of being updated in the future, than with the fixed-forever hardware.

A reasonable question to ask at this point might be “Who is this for?”. After all, if you’re a regular reader of Scoring Notes, you probably have a lot of ways “getting the notes in”. And at least for me, as cool and fun as Odla was, it was much slower than using my Apple Magic Keyboard, even before I add a MIDI piano keyboard. Instead, I think this is a device that will be most useful to new groups of users: young students and musicians who are visually impaired.

First, for students, Odla allows something very close to direct manipulation of the staff. For those who are new to staff notation, having the ability to touch a space or staff line could help them to connect the abstraction of notation to the sound, in the same way that pressing a key on a piano connects that keyboard to sound. And of course, what kid doesn’t like pressing buttons? (Some of us have yet to outgrow this phase.)

Second, visually impaired users will have a new way of understanding and working with staff notation. Until now, it has been difficult for users of music braille to work with musicians who use staff notation, as the two systems have surprisingly little in common. Odla even comes in a special version for blind users with some extra features for working with screen-reader features that they added to their version of MuseSore. Notably, this is independent of the screen-reader features that MuseScore has since announced for the forthcoming version 4.0 release. (Additionally, note that this version of Odla does not work with Dorico or macOS.)

My university’s Office of Disability Services has purchased one of these versions for our students, and as accessible computer hardware goes, the price is quite reasonable €599 (around $634 USD). Even the most basic braille notetakers can cost nearly ten times as much, and as music notation is so specialized, I’m genuinely shocked to discover the price on this device. I applaud Odla for keeping the price so low.

For the standard Odla €247 (around $261 USD, only a tiny bit more than a Stream Deck XL) might make the device seem to be a clever-but-impractical unitasker many users. For others, the tactile interface might might be a way into learning music notation and scoring software in a friendly way. And last, I think there could be a group of users who can use Odla to add to their current input tools rather than replace any existing peripherals. For example, you could use the rhythm and navigation keys on the Odla alongside a MIDI keyboard in a nice, focused setup.

Odla co-founder Alessandro Pace tells me that he sees this initial product release as a starting point for the company: “We are studying and creating prototypes for a wider compatible version that wants to reach other software (using MIDI and macros).” Perhaps the next product from Odla will allow you to work with any notation application, or even DAWs and sequencers like Cubase and Logic Pro. In a market that is saturated with nearly identical MIDI hardware designs — piano keyboards, drum pads, sliders, and knobs — it’s very exciting to see companies like Odla experimenting with new things.

On conclusion, I think Odla is a really thoughtfully designed piece of hardware that may not fit into every workflow, but could be of great benefit for the right kind of user. And it’s definitely fun.