Arne Wallander said, “These are by far the most sought-after features in this update, affecting a lot of people (Finale and Dorico users, where overriding the sound patch for a staff isn’t yet possible).”

This is a great release, and it’s a free update for all existing NotePerformer users — even users that haven’t yet upgraded to NotePerformer 3.

You can get a sense of Arne Wallander’s high standards that he would call his earlier release a “debacle”. It would be much more charitable, and accurate, to describe it as a “first draft”.

Still, the point is taken that, compared to the plug-and-play installation that Sibelius users have enjoyed since the first days of NotePerformer, using it with Finale was more difficult. Users of NotePerformer 3 were required to run a series of FinaleScripts and to use a separate Human Playback preference set, all of which was counter to NotePerformer’s reputation of being easy to use.

Now, to set up NotePerformer 3.1 in Finale, all you need to do is go to MIDI/Audio Setup > Sound Map Priority… , drag NotePerformer to the top of the list, and click OK.

Note: If you know that you’ve installed NotePerformer but it’s missing from the above dialog, quit Finale and re-install NotePerformer. This problem can happen when you install a new version of Finale, because MakeMusic changes the folder for the Sound Map with each new version. Re-installing NotePerformer should make it reappear in the Sound Map Priority list.

Once you do that, you should select to MIDI/Audio Setup > Reassign Playback Sounds so that Finale automatically assigns NotePerformer sounds to all of the instruments in your Finale file. You’ll get a message that this will alter the document:

At that point, if you go to Window > ScoreManager > Instrument List, you should see that all of your instruments are using NotePerformer. 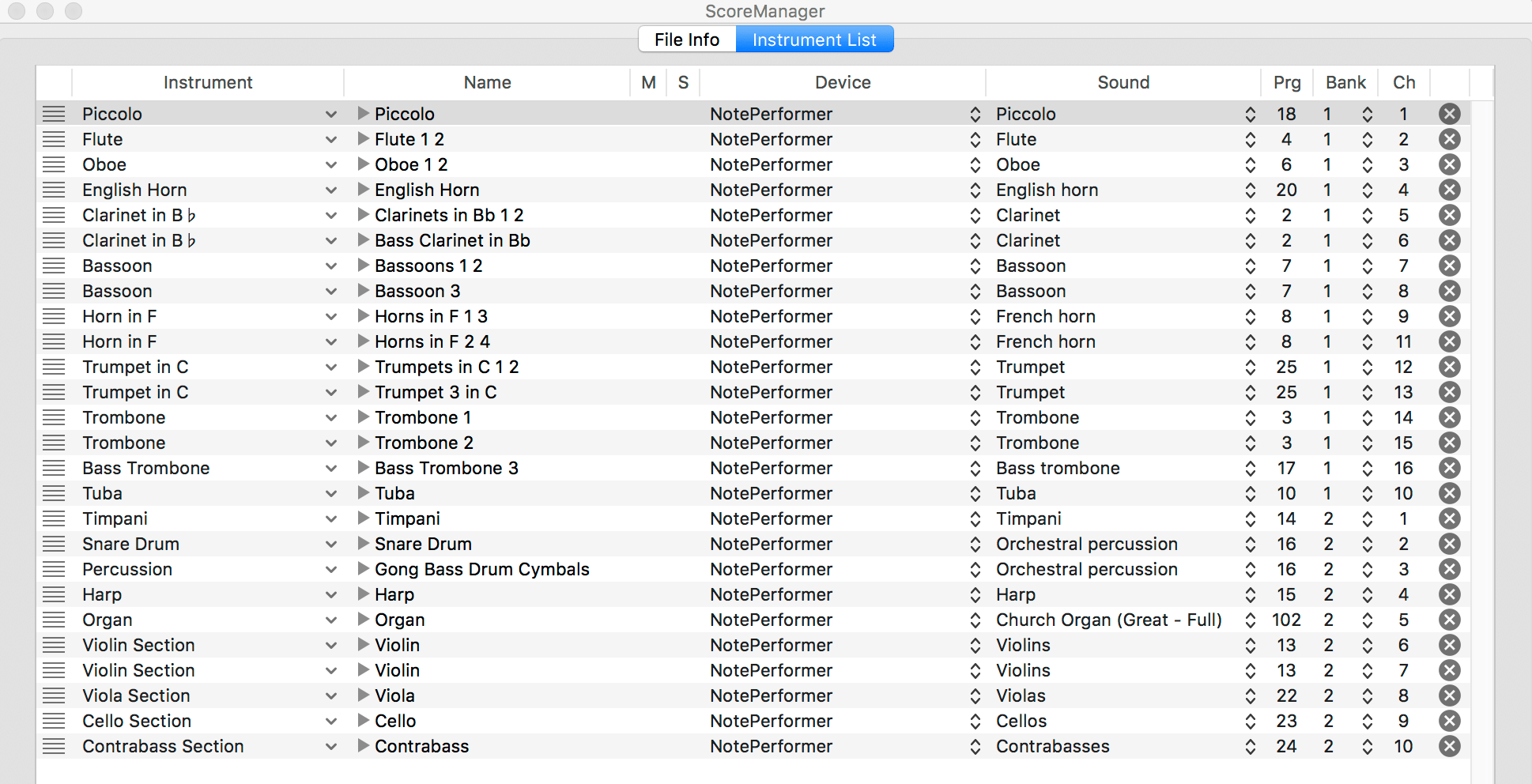 If you make any changes here, you need to run MIDI/Audio Setup > Reassign Playback Sounds again.

If you don’t happen to have this blog post handy, NotePerformer 3.1 now has a Quick Start guide to walk you through the setup steps: 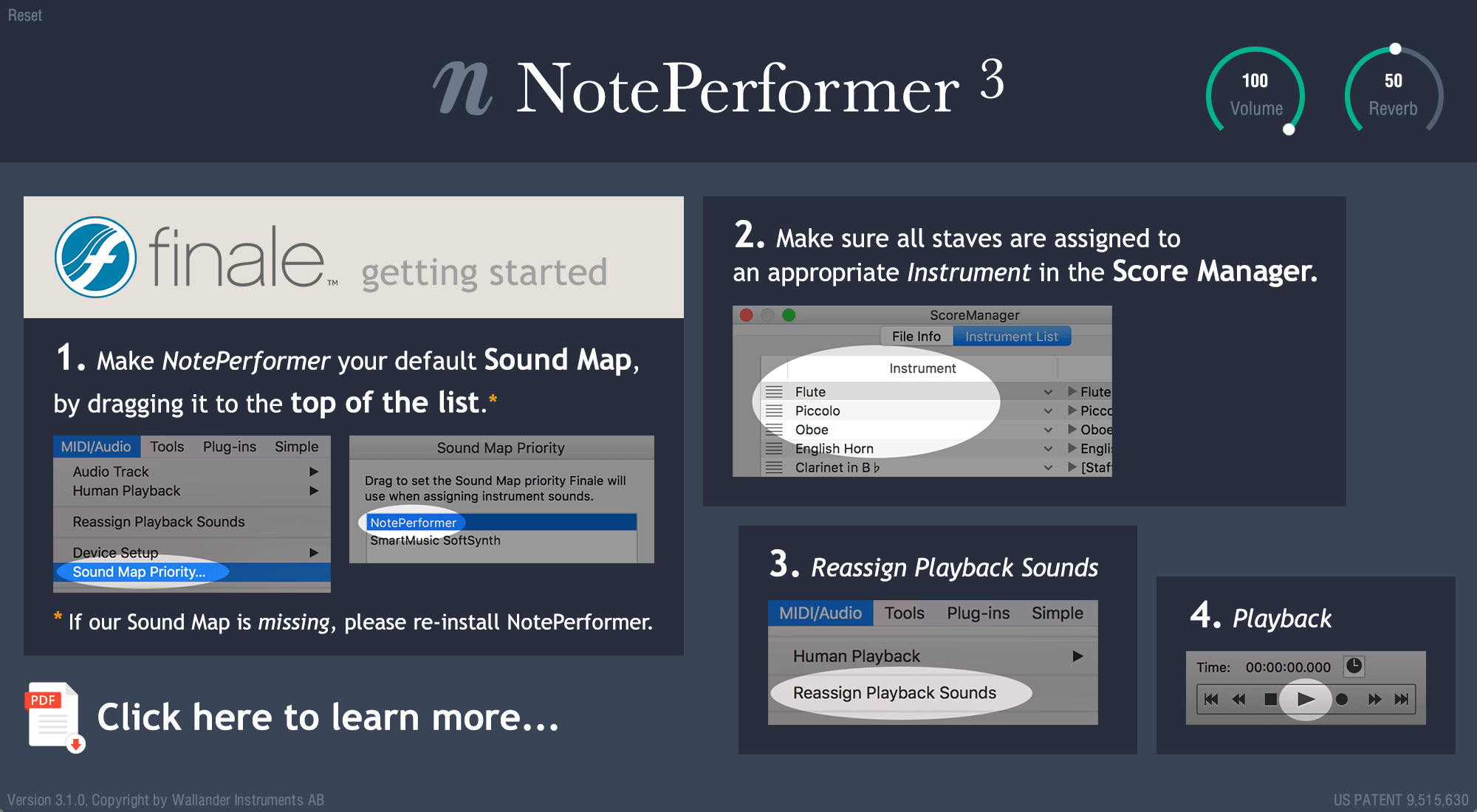 There are still a few scripts that you need to run to get the most out of NotePerformer in Finale. There are some techniques such as a2, a3, etc., and non vib., which aren’t described by Human Playback. 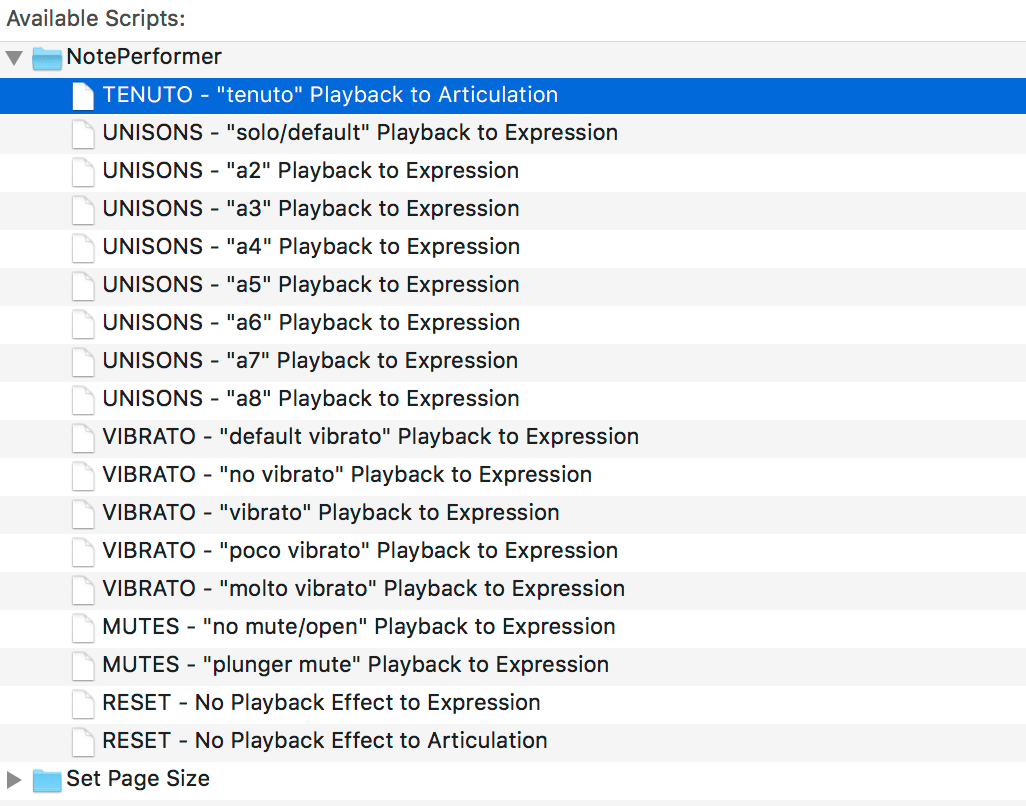 For these, you must select the expression’s handle and run the appropriate script. There is also a script for using the tenuto articulation, because tenuto isn’t otherwise detectable in Finale.

The only other notable caveat is that, because of NotePerformer’s special ability to read ahead, the playback line is off by a second, because Finale can’t make the latency compensation required. MakeMusic has said that improving this is a priority for the v26 cycle. (The good news is, as we noted in our Finale v26 review, there is no longer a one second delay when entering music in Finale v26 while using NotePerformer, the way there is in Finale v25.)

These are small quibbles. Even if you don’t take the time to run these extra scripts, NotePerformer 3.1 sounds amazing with Finale, especially when you consider its $129 price and ease of installation.

Here’s an arrangement I made of Holst’s Mars from The Planets, entered in Finale. Other than reducing the instrumentation for more standard symphonic forces, almost all of the score is unchanged notationally, and almost no changes are made to accommodate playback. The only concessions for playback I made were at the very end — adding a few custom dynamics and tempo markings for the rallentando to the end of the movement. I didn’t even run any of the recommended NotePerformer scripts.

Here’s the playback, using Finale v26 and NotePerformer 3.1. You will notice the one-second difference in the playback line compared to the audio.

Does it sound like the Orchestre Symphonique de Montréal with Charles Dutoit at the helm? Well, no. But it’s a computer playing the score, all automated, for $129, with hardly any setup beyond entering the score just as it appears on the printed page, without the need for a sequencer or expensive sound library!

Compare it to this rendition, from the same score, using the included Garritan sounds that come with Finale:

There’s really no comparison. What Arne Wallander has achieved here is really incredible.

Here’s one more example — an excerpt from an arrangement of “Seventy-Six Trombones” from The Music Man (click for score).

This time, first, the Garritan sounds that come included with Finale:

And next up, NotePerformer 3.1 playing the exact same file:

The other major new feature in NotePerformer 3.1 is the ability for the user to override instruments directly from the NotePerformer mixer in Finale and Dorico. While this feature is built into Sibelius, not just for NotePerformer but for any sound library, that’s not the case with Finale or Dorico.

Because NotePerformer’s mixer takes precedence over the mixer for these programs, you can now easily override the sound of any channel, if you wish:

Of course, you can easily reset it to the default by choosing (reset).

There are lots more new features, improvements, and bug fixes in NotePerformer 3.1. Here’s a summary:

NotePerformer 3 is available as a download — a very small one, compared to just about any other sound library — for $129. Existing users can download the update for free.

A 30-day free trial is offered.

If you ever play back your scores in notation software, NotePerformer is the next thing you should purchase after purchasing the notation program itself. It gets our highest recommendation for its ease of use, price, and stellar results.