Guitar Pro can best be described as a Swiss Army knife for the practicing guitarist. Its hybrid nature means it has many features familiar to users of a DAW and of notation programs, as well as various practice apps (metronome, backing tracks, etc.) Its appeal is to synthesize these into a single software program that is solely dedicated to fretted instruments such as a guitar, bass, or ukulele. In theory, by having them under one roof, your workflow can be streamlined, and a more intuitive experience for the user.

How well does Guitar Pro 7.5 accomplish this mission? Can an easy and intuitive software also deliver the goods when heavy lifting is required? Let’s find out.

Although my review is going to focus on the notation capabilities of Guitar Pro, there are many other features guitarist will find immensely useful. Guitar Pro offers a companion product called mySongBook where users can buy an authorized version of fully tabbed guitar songs. The full tab, and backing tracks are then downloaded right into Guitar Pro. The video overview of mySongBook can be viewed online.

It’s a clever move around piracy to entice the user to buy the sheet music by offering the user more features. Looping, changing tempo, and mute/solo tracks are all easy to access within a single screen window. This is an important point for laptop owners as often the larger DAWs like Logic, Cubase, and Digital Performer are only optimized when the user has at least two computer screens to navigate between the mixer and editor mode seamlessly.

One of the things Guitar Pro gets right is that the “tone” of the program screams guitar player. Right at the outset I can join my dream “Stoner Band” (no reason at all why that is my dream). At the risk of offending my guitar playing brethren, Guitar Pro feels a bit like “Stoner Band” was a beta-tester. Want to know the keyboard shortcut for “hammer-on”? It’s H. Others: Slide (S), Palm mute (P), Bend (B) Doritos (7-11). OK, the last one was a “Stoner Band” joke.

The program just makes guitar players feel at home. This is important considering how much time is required making music notation. It’s not an easy task to notate music, and hating the work environment won’t help. All genres are equally welcome here. I can easily imagine “shredders” to finger style acoustic guitarist reaching for this program and finding much to like.

Guitar Pro has grown more robust with its notation capability compared to earlier versions. There are options for the margins, text styles, staves, headers and footers, and more 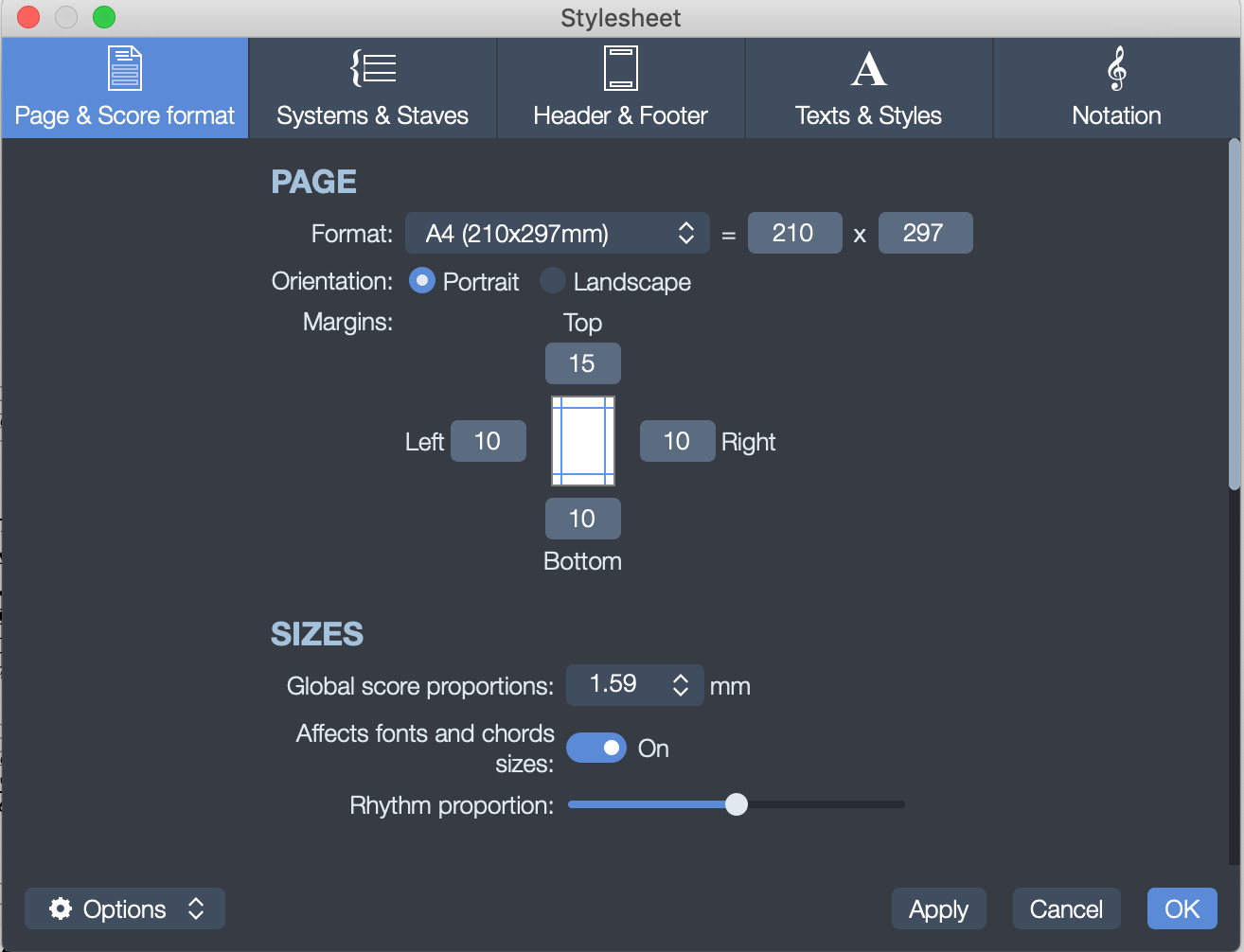 Another feature Guitar Pro gets right is the various playback interpretation options. This is an area in which for a long time I have felt Sibelius would do well to expand its capabilities. Want the sound of a pick? No problem. Prefer the sound of fingers? No problem. This can be combined with palm mute or golpe, all the way to whammy bars and wah-wah pedals.

There is a learning curve — true of all software — but I can already see how using a fully dedicated guitar notation program will allow for faster workflow once the keyboard shortcuts are memorized.

In Sibelius (my daily notation program) there just is not enough keyboard real-estate to assign customized shortcuts for all of these items. Additionally new shortcuts in Sibelius would become complex chains. (Alt-Shift-W for example). It’s nice to see just B as a shortcut.

I do love how the guitar notation looks like the TABS I used to buy as a teenager. Doing an Eddie Van Halen transcription in Sibelius would be tedious. This is “home field” for Guitar Pro.

Let’s take a look at string bends as an example. All I need to do is select the note I want to add a bend to and press B. A window opens up that looks like a channel EQ but for guitar bends. 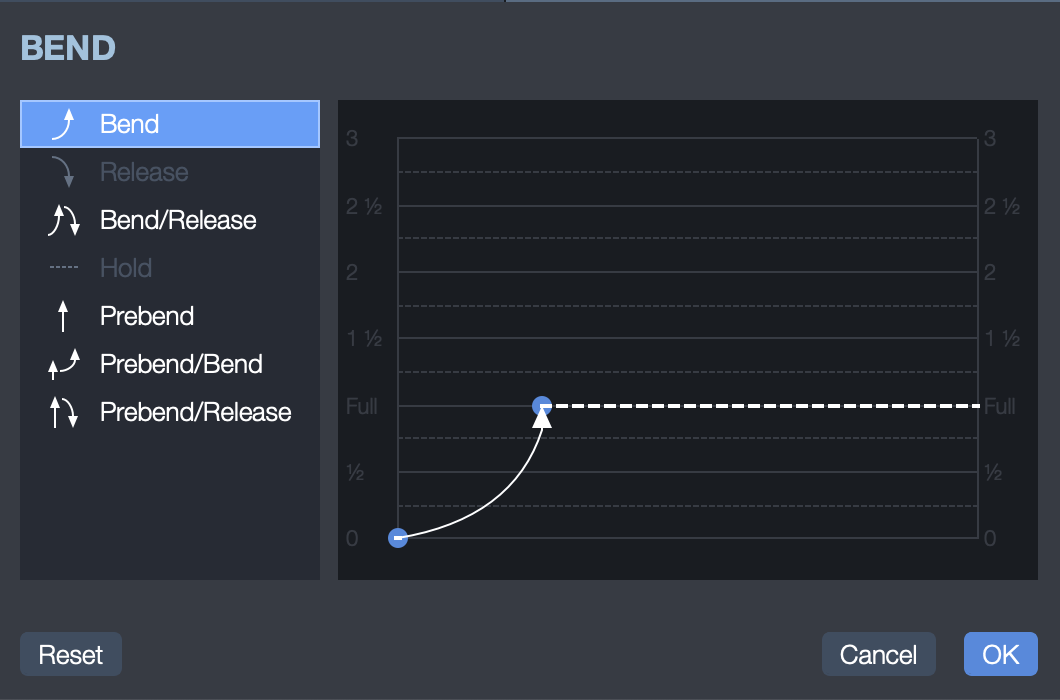 I see a set of options in the menu on the left, and the ½ – Full – 1 ½ refers to the number of half steps the pitch is to be bent (on the guitar every half step is one fret apart). Guitar players can bend the string of in variety of ways; bend and release, bend and hold. Bend the string first, then pluck the string, and release the bend so the listener hears only the pitch descending. All the options are nicely available in a very easy to use fashion. 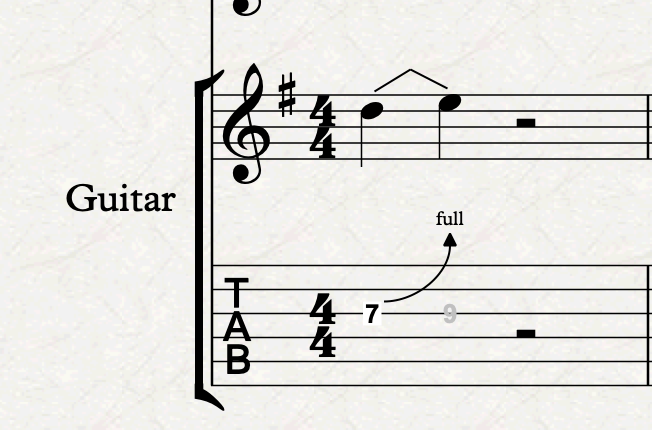 The music notation that looks like a tin-foil-hat covers the D and E. Also, notice the hidden pitch (9) in the tab. That’s the other frustration I have with Sibelius. This creates all kinds of clutter and frustrating work flow. It gets worse in Sibelius. All bends are treated as grace notes. None of these are intuitive to figure out as visually they look nothing alike.

In contrast, in Guitar Pro it’s a breeze. I just click on the annotations I want. Click a single button and the rest of the work is taken care of automatically. 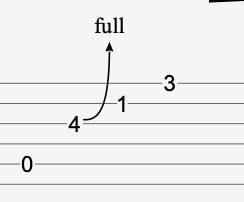 It wouldn’t be a review if I only spoke about the positives. Here are the main drawbacks I ran into.

The lack of mp3 importing is very odd. From my own guitar playing days (I went to Musicians Institute – GIT – in Hollywood a long time ago!), I know the number one thing guitar players like to do is play along with the recording of their favorite songs. Learning to play music by ear is a crucial skill all serious musicians need to practice. It seems to go against the entire ethos of an all-in-one practice program to not have mp3 imports. This means if I was working on a transcription I would need to use another program and then write out the notation in Guitar Pro.

My number one suggestion for future versions would be to include audio import capability. I am sure it would be a welcomed addition. It would take Guitar Pro to the next level of sophistication.

The more in-depth I tried to go with notation the less intuitive things became. (To be fair, my first DAW was a program called Vision by Opcode, so my reaction may not be universal.) When I see familiar-looking designs I behave in a habitual pattern. The side notation symbol menu looks to my eye very much like the one in Logic audio by Apple. I found myself want to drag notes over onto the notation page like I can in Logic. Click and drag was not possible in Guitar Pro.

Using one of the example scores provided with the software, I tried making the bar numbers larger, and every system rather than every measure. After 45 minutes of looking, I could not find the solution. After communicating with a Guitar Pro representative, however, I was informed it is possible to change the proportions and the page settings in Guitar Pro, including the text and style of the layout.

Still, the defaults were too small for my liking. This is also a knock on most of the notations I saw on at mySongBook. The proportions were almost always wrong for tempo markings, bar numbers, instrument names. Text just appears really difficult to work with. That’s a surprise as I would have thought TAB would be a much more complicated problem to solve.

Perhaps all these issues relate back to Guitar Pro being originally designed as a TAB editor. Similar to Sibelius, Guitar Pro was designed a certain way (for tabs) and now developers are trying to bend it as far as they can. However the shadow of tabs is omnipresent. It forces a decision too quickly for my liking. Using the mouse arrow to hover over the note B (middle line treble clef) I can press 3 on my computer keyboard and a (4) appears on the G string. If I press 4 a (9) appears on the D string. Now this is all correct, but the program seems to push me into this mode of thought as it operates smoother this way than simply letting a B be a B. Fingerings and phrasing become more personal the more advanced the musician gets, so I felt very much having to pull a horse by the reins while entering the notation.

Lastly, I am left wondering why the music software wheel needs to be reinvented. TABs are 100% the strength of Guitar Pro. So why not form a partnership with another company that excels in an area that would be complementary with Guitar Pro? That’s more a rhetorical comment. Plug-ins are almost always the source for extra bugs that creep into programs, and also add in the copyright/licensing work, so it’s clear to understand why they haven’t gone this route.

However, the user is robbed of what could be a wonderful workflow. If Guitar Pro would support ReWire, then notation can be synced up with audio. While the new instrument banks are nice, this is such a well developed area of music software I can’t help but dream of being able to use my Native Instruments instrument banks or guitar effects within Guitar Pro. It would be fantastic as a plug-in for Logic which I could tab out guitar/bass parts while having the full use of Logic.

A daydream for sure. The MIDI import/export route has always had flaws, and Guitar Pro is just catching up. It’s not a serious solution to workflow problems between notation programs.

Conclusion (and a discount code for Scoring Notes readers)

Overall I have a positive impression of Guitar Pro 7.5. I first used this program about seven years ago, and I am impressed at how much it has grown since that time. We are now entering a more mature phase of the software.

14 years have passed since the launch of Guitar Pro, so you can have confidence this software is going to be around in the future and continuously improved.

The price point is actually very, very good. For $69.95, and $34.95 for an upgrade from a previous version, what you get is really fantastic. And if that price isn’t good enough, for a limited time Arobas Music is offering Scoring Notes readers 30% off of a purchase of Guitar Pro. To get the discount, enter the code SCORING30 at checkout, or just follow this link to have the discount automatically applied to your purchase.

If your expectations are tempered properly, Guitar Pro will be a very happy purchase. Captain Obvious will tell you that guitar players who rely on TAB are the one who will fall in love with this product the most. A free trial is available which allows you to use all of Guitar Pro’s features without restriction for 30 days, so you really have nothing to lose.

Would I use it for my work doing professional transcriptions and notation? No, not as the only software. If I imagine how I would personally include Guitar Pro into my workflow, I’d create the bulk of the notation in Sibelius, export it to MIDI, and use Guitar Pro’s new MIDI import feature to add on any guitar specific tab notation.

For working professionals, $69.95 (and even less with the Scoring Notes reader discount) is such a reasonable price that if you work with guitar music regularly, you’ll want to get Guitar Pro. As I mentioned at the start of this review, it’s is a Swiss Army Knife guitar TAB editor, and you’ll be happy to have it in your tool box. But you’ll still need a hammer, saw and screwdriver.

Douglas Gibson is a professional composer and orchestrator.