Santiago Barx has released a major upgrade to his Graphical MIDI Tools (GMT) plug-in for Sibelius, which allows the user to manipulate MIDI information in the score in a graphical manner.

The first version of GMT was an impressive feat that created a graphical overlay on the Sibelius score, using Sibelius’s drawing capabilities to simulate the appearance of a digital audio workstation (DAW) and writing tiny hidden MIDI messages into the score to control the finer points of playback.

The latter approach is still very much a part of GMT 2, but the first part has been completely overhauled. GMT 2 is now a fully-functioning native-code application that actually runs within Sibelius and communicates with it via Sibelius’s scripting language (ManuScript) to provide a piano roll window. It opens a temporary sequencer frame on any given selection, and then gives the user the ability to draw in automations to manipulate the data in a way never before seen in a Sibelius tool. Moreover, there are additional windows to adjust velocity and note duration in a piano roll-like fashion.

Unlike GMT 1, which needed to be installed manually by the user, GMT 2 guides the the user through a process that automatically installs the GMT application and the plug-in that it uses to communicate with Sibelius.

GMT relies on a shortcut to show the interface as well as to communicate with Sibelius. You can choose any shortcut you like, but it must be a single key without any modifiers such as Shift, Alt, or Cmd/Ctrl, because GMT uses those modifiers for functionality.

The GMT documentation uses the Tab key as an example, but I prefer to use the U key instead (because it is “Unused”), since Tab is an important default shortcut in navigating around Sibelius without a mouse.

From then on you can simply type the shortcut key to open the GMT interface; you can also easily add it to a Stream Deck or other triggering device.

If you’re familiar with working in a DAW — or, perhaps a more apt analogy would be Dorico’s Play mode or StaffPad’s automation lanes — you’ll be familiar with the way GMT generally works.

With GMT, you can fine-tune the start position and duration of each note in your music by dragging the start or end of each note’s representation in the piano roll. These changes will only affect the playback, and not the written score. 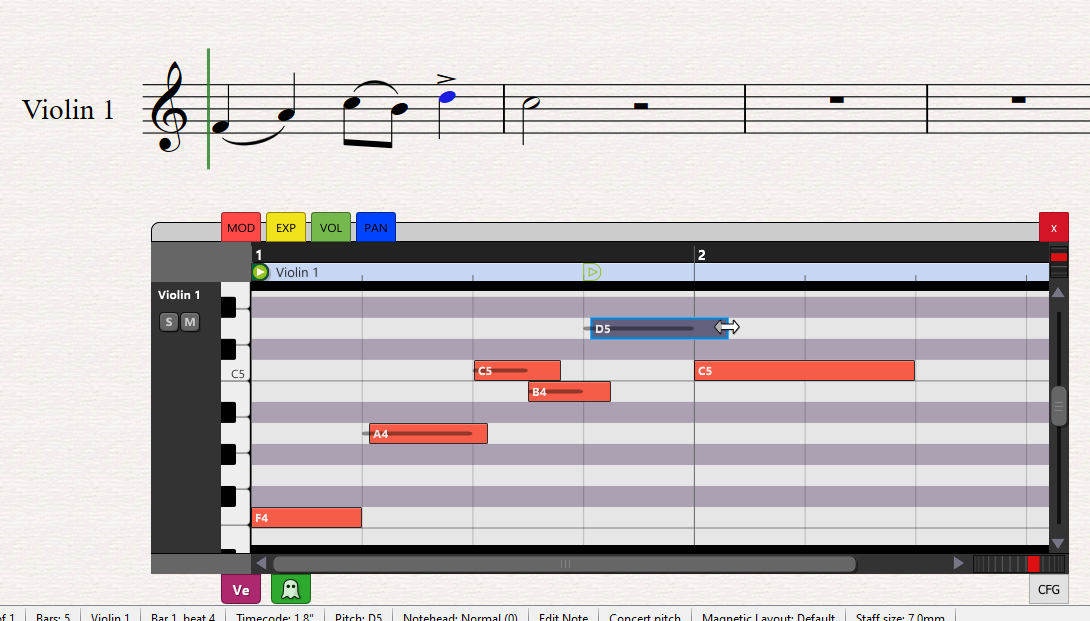 It’s easy to draw automation curves for any controller. GMT will draw in nodes on the automation lane at regular intervals on the 16th note grid.

Or to disable the 16th note grid, for even finer detail.

You can even add more CC (continuous controller tabs in addition to the four GMT 2 defaults of modulation, expression, volume, and pan. Here, I’ve opened the GMT 2 preferences (the CFG tab on the bottom right) and added sustain and pitch bend: 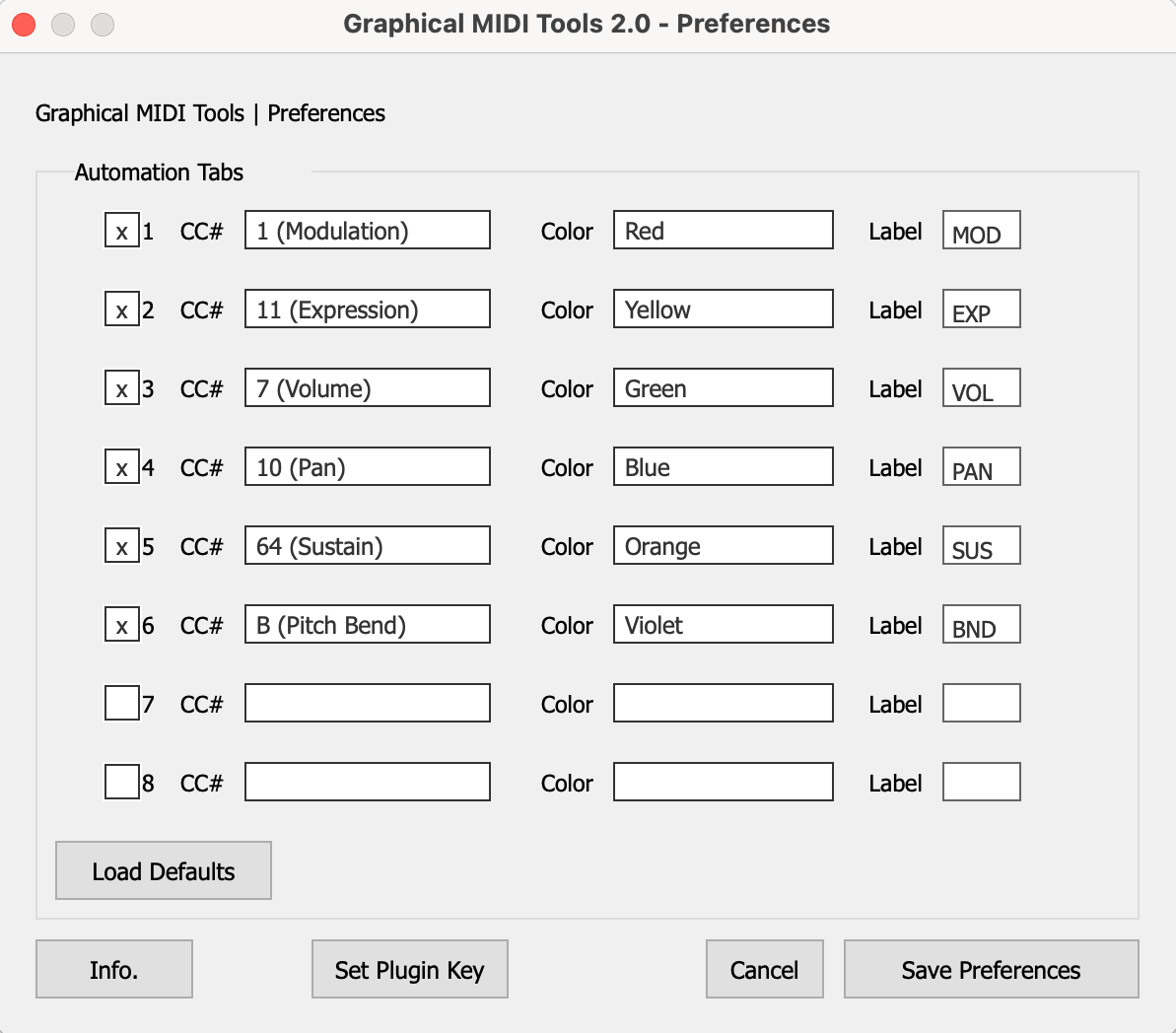 The new tabs appear as SUS and BND in the GMT interface, which is completely customizable: 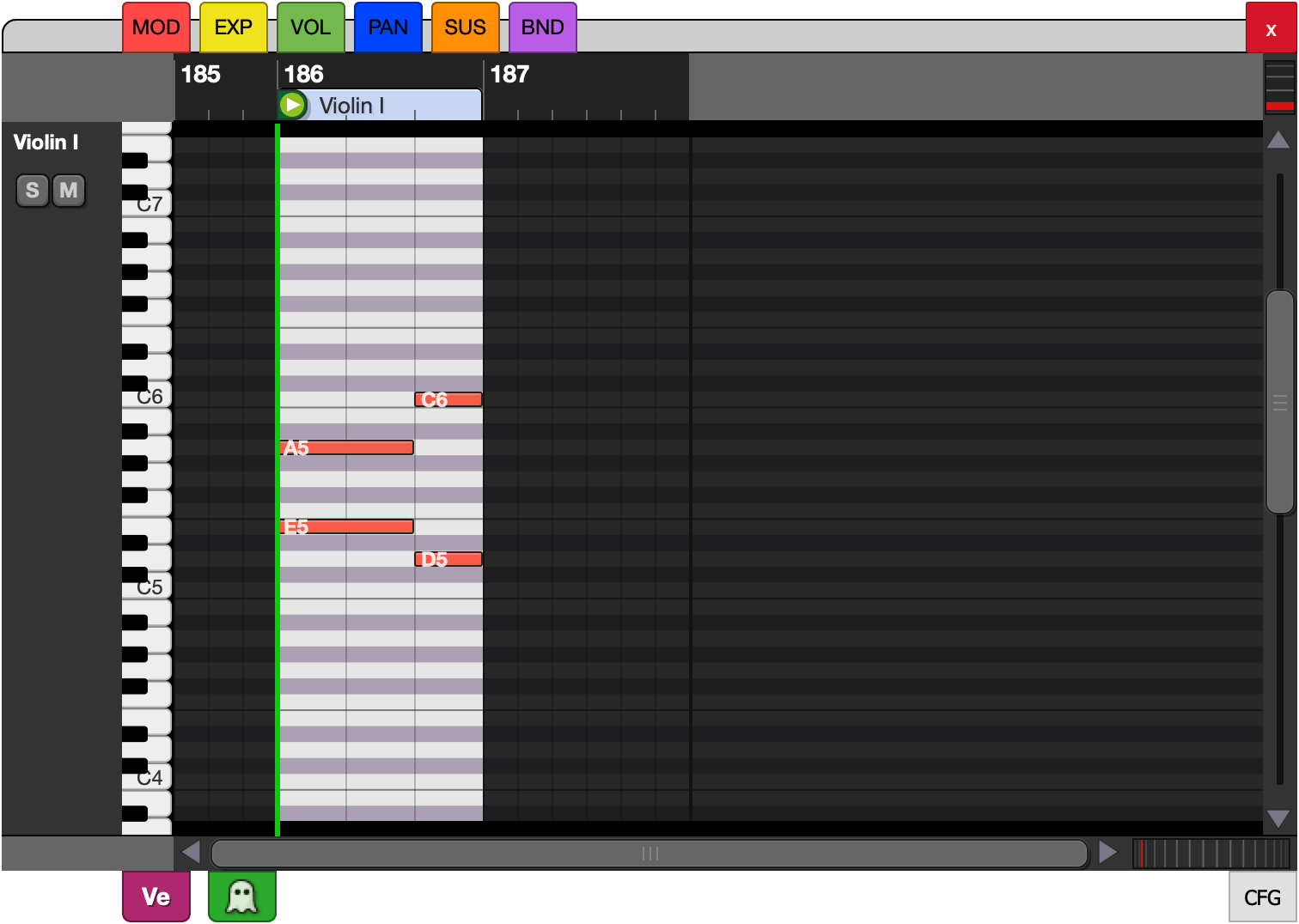 With GMT you can indicate which velocity you want a note to have. This is done by clicking the Ve tab on the bottom left corner of the interface to open the Velocity lane. 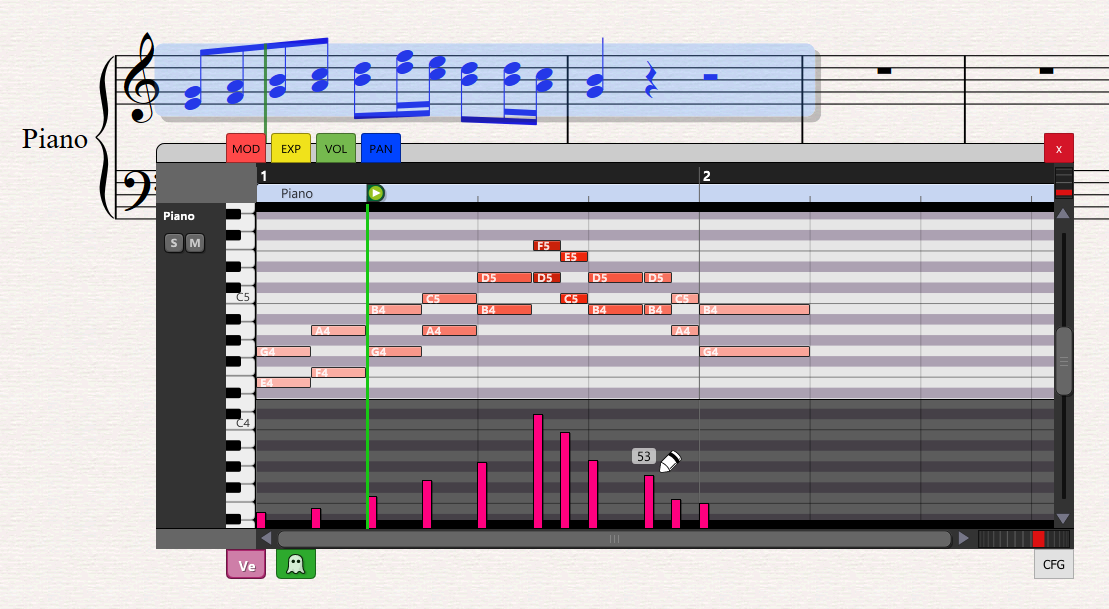 You can leave the velocity unset for any note to let the playback engine play its default, which will be represented by gray dashed lines, indicated that the user has not specified any velocity. 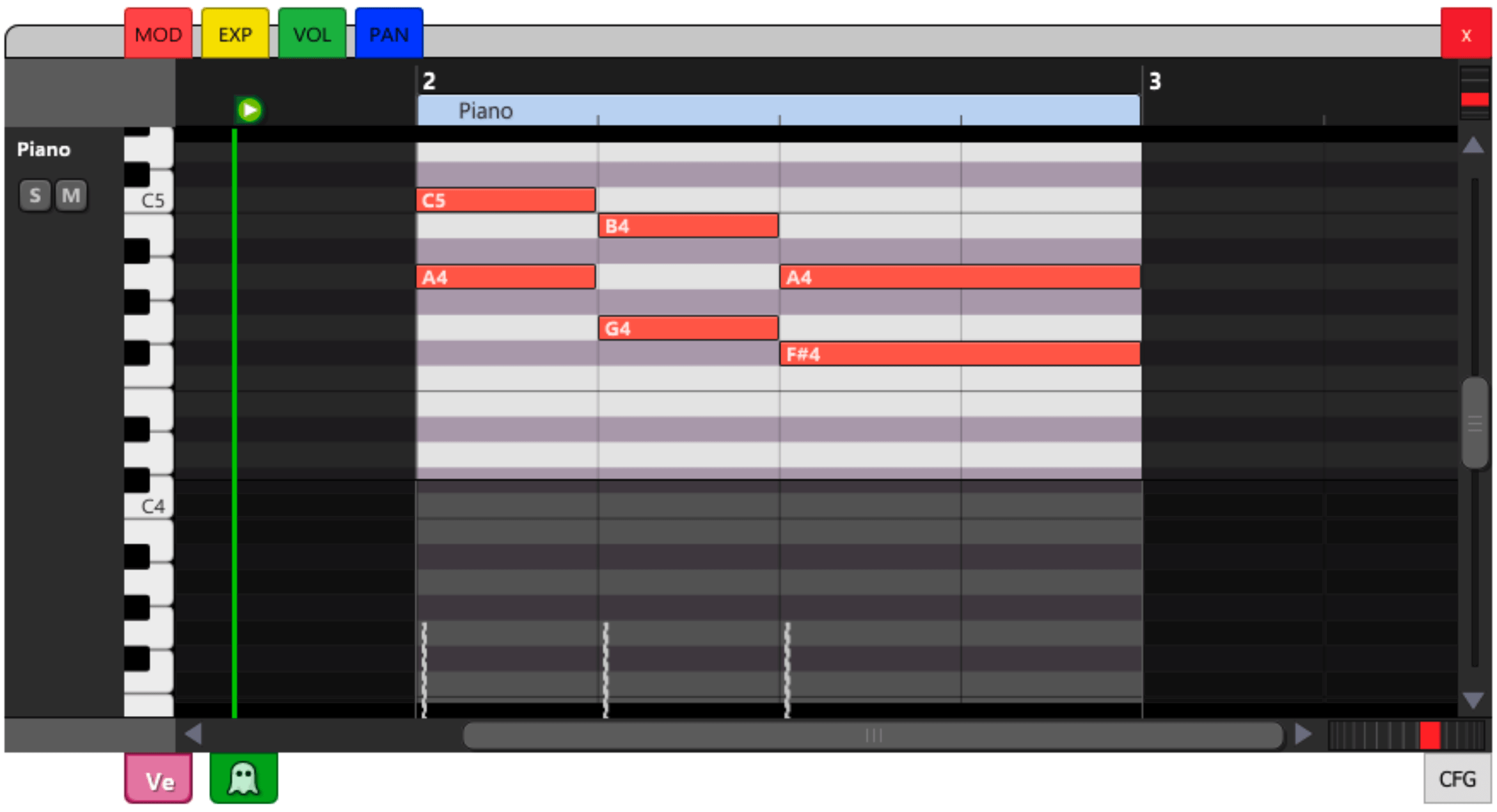 If you have Play > Live Playback > Velocities switched on, you will see the results reflected directly and instantaneously in Sibelius.

Any velocity that is manually set can be reset to the default by right-clicking and using an eraser tool.

New to GMT 2 is a “phantom” notes module, represented by a friendly ghost-like icon, where you can insert and edit MIDI hidden notes which are only performed by the playback engine (via MIDI commands), and do not affect the written score at all.

This allows you to recreate performances whenever notation is not totally explicit in the score, like on a harp glissando indication.

“Phantom” notes are also useful for triggering key switches, if your library supports them, like very low or high notes not sampled by the instrument.

GMT communicates with Sibelius in a few ways.

For note velocity, start position, and duration, it adjusts the Live Playback settings for each note, which can be viewed in the Inspector.

For this reason, Live Playback must be enabled in your score, otherwise these adjustments will not play back correctly.

For everything else, GMT writes very tiny MIDI messages directly into the score, and hides them with the tilde (~), a long-established Sibelius method of writing hidden MIDI data. 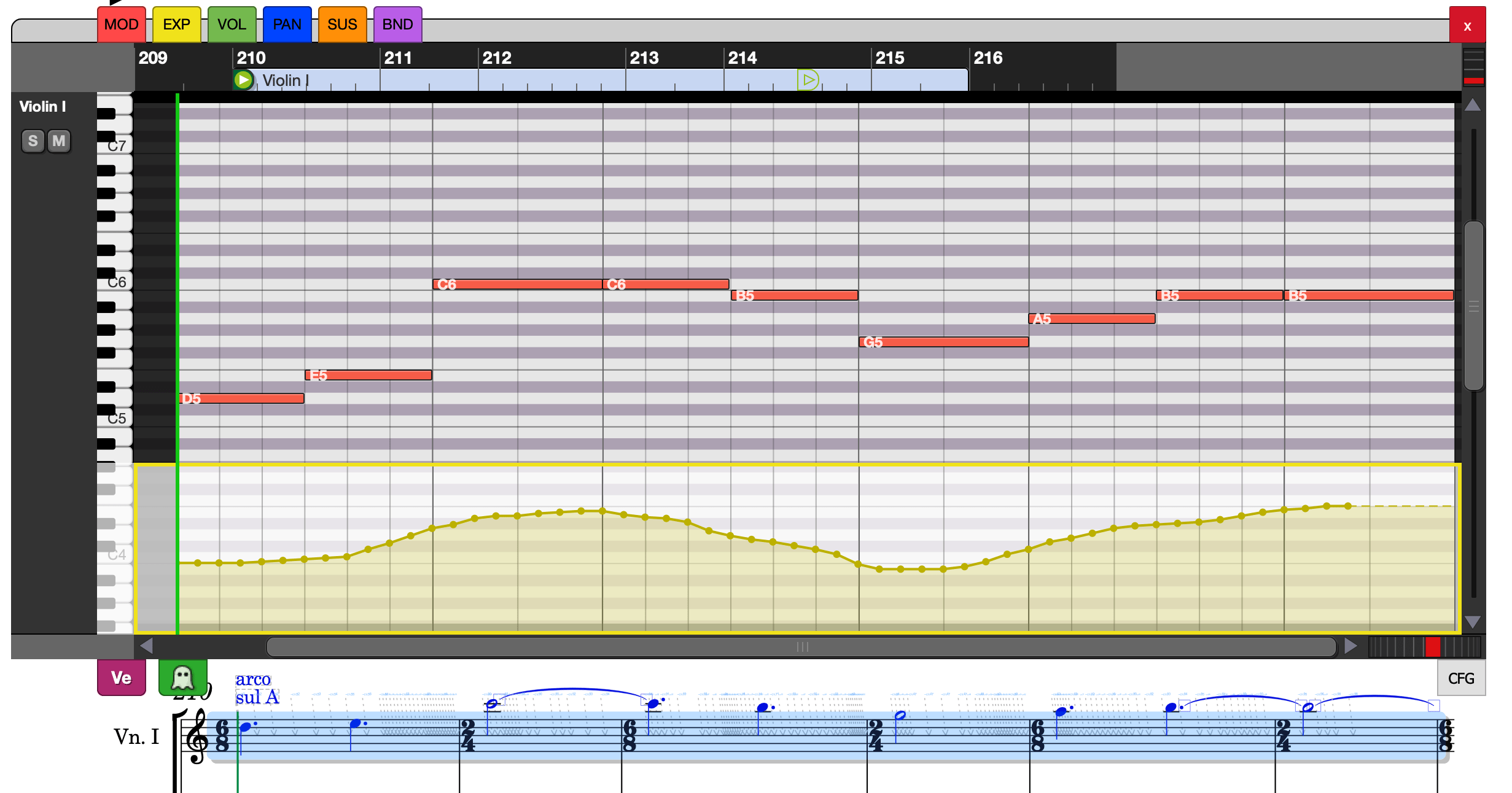 You can barely see them, but if you select the passage or turn on View > Invisible Objects and zoom in really closely, this is what they look like: 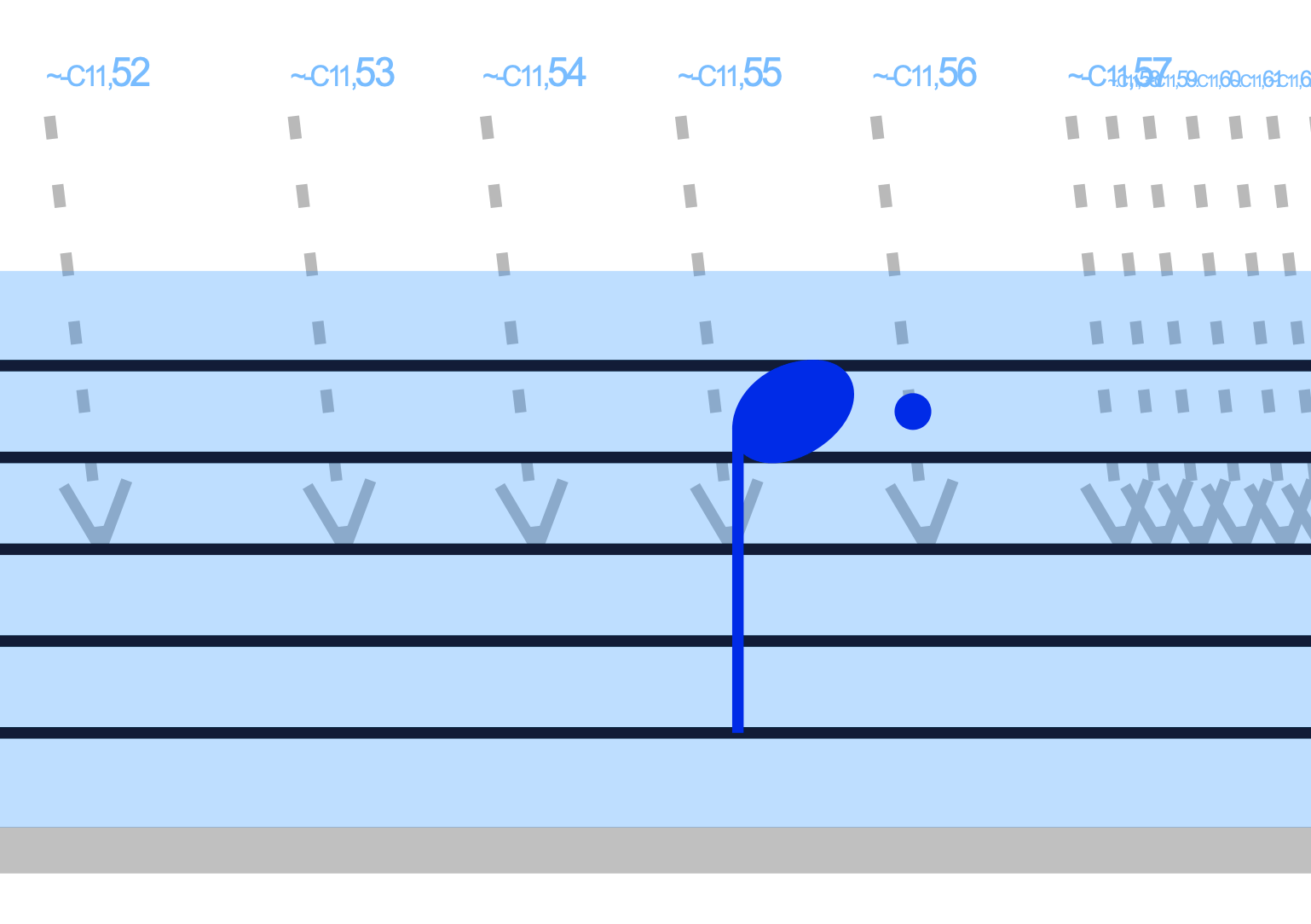 The beauty of this approach is that GMT is taking advantage of existing Sibelius functionality and “merely” automating the creation of it in a DAW-like fashion. The playback itself is not running through any special processor other than what you already have in your Sibelius playback setup.

This means that if you and your friend both have Sibelius and the same playback virtual instrument (NotePerformer, for instance), but only you have GMT and your friend doesn’t, you can create your score in Sibelius, modify the score using GMT, and send the file to your friend. When your friend plays your score back, it will sound exactly the same as it did on your computer, because all of the data is written into the file.

The downside of this approach is that you might now have potentially hundreds or thousands of extra text objects in your score, and if you’re not careful, you might accidentally delete them or move them out of place. In practice, as long as you’re aware how GMT works, this should not pose a serious problem, but you should understand what’s happening behind the scenes.

When Santiago first showed me Graphical MIDI Tools 1 a few years ago, my eyes got as big as they could possibly get.

When he showed me GMT 2 shortly before the release, not only did my eyes widen, but my jaw quite literally hung open for a good long while.

If you use MIDI within Sibelius to refine your playback output, then GMT 2 is a must-have addition to your setup. What Santiago has been able to achieve here is remarkable, and at just $59.99 ($24.99 for upgraders from GMT 1) it’s a huge value.

The main limitation with GMT is essentially that it’s not a built-in solution like Dorico’s Play mode, or StaffPad’s automation lanes, both of which were conceived from the very beginning of the development of those applications. GMT is instead a third-party application and is relying on technical solutions to overcome Sibelius’s limitations in providing a true DAW-like interface for working with MIDI data.

The flip side of that coin, however, is that you don’t necessarily need to wait for a Sibelius update for GMT to improve. Santiago and the GMT team can update the application at any time, and we can hope and expect that he will be responsive to suggestions for improvements and bug fixes.

To that point, there are a few rough edges in this very first version, which will likely be ironed out in time. The zoom feature is a little jumpy and getting the hang of how to make sure that the interface reflects your intentions takes a little practice. There is no “live refresh” in GMT yet, meaning that if you change notes or delete MIDI commands directly in your Sibelius score while the GMT window is open, those changes won’t immediately be reflected in GMT until you close and re-open the interface. And speaking of closing the window, you can’t do that via a keyboard shortcut, which seems like an oversight.

All of those issues are promised for refinement in the future, but even with those caveats, Graphical MIDI Tools 2.0 is an impressive release for what is essentially the first version of this re-built tool, and you’ll surely enjoy what it can do for you in Sibelius.

Graphical MIDI Tools is $59.99 ($24.99 for upgraders from GMT 1) and available at our Notation Central marketplace. (A free 15-day trial is available, which stops working after one hour, requiring a Sibelius restart.) It’s also available directly from the Graphical MIDI Tools web site. Full documentation, installation guide, and corresponding videos are included.

Graphical MIDI Tools (GMT) is a Sibelius plug-in that ingeniously superimposes a sequencer-like frame on any given selection, and then...

Wallander Instruments, a Swedish maker of virtual instruments for computers and mobile devices, this week released NotePeformer for Sibelius. NotePerformer...