Today Avid released Sibelius 2018.6, the latest version of its notation software. This release focuses on realizing at a technical level the product re-branding strategy first introduced in April. That strategy brought Sibelius in line with Avid’s other products by calling the pro tier “Sibelius Ultimate” (formerly “Sibelius”) and the student/amateur tier “Sibelius” (formerly “Sibelius First”), while announcing a third, free version to be called “Sibelius First”.

Today’s release makes good on the last part of that announcement by making that free tier available, and combining all three tiers into one installer. This is part of a process that dates back several years to have all levels of Sibelius share the same codebase instead of running as separate programs with different features.

While the 2018.6 release is mostly geared toward unifying the different Sibelius tiers into one installer and the availability of the free tier for the first time, a few improvements made their way into this release in the areas of note spacing, grace notes, multi-text entry, tied notes, and more.

Until today, if you bought a license to separate tiers of Sibelius products, each one came with a separate installer and ran as its own application with the features based on the tier you had installed. As of today, there’s now a single application called “Sibelius” that is capable of running any of the tiers. Which one runs will depend upon the license you have activated.

If you’re installing Sibelius for the first time, you’ll install a single application. If, like most readers here, you have a computer with Sibelius, Sibelius Ultimate, or Sibelius First, these will all get replaced with the new “Sibelius” application.

Behind the scenes, when you open Sibelius, it will check your license and entitlements and run in the appropriate mode. If there is no license or ongoing trial, you’ll get a new dialog with options to start a new trial of either Sibelius or Sibelius Ultimate, or activate your own license, or continue with the free Sibelius First product.

If you have a valid license, but activation doesn’t take the first time after installing Sibelius 2018.6, you may need to log in to your Avid account or the Avid Application Manager and restart Sibelius.

It’s worth reiterating that Sibelius First is the new free product, even though that’s the name by which the paid student/amateur tier was known for many years (now simply called “Sibelius”).

It can be thoroughly confusing to anyone who has worked with Sibelius for any length of time, but the takeaway is that there is a free version of Sibelius available for the first time, to anyone.

There is a very clear and detailed comparison chart for the three Sibelius tiers on Avid’s web site, where you can see what’s included and omitted from the various products (keep scrolling down the page and more sections will appear as you go).

The main limitations of the free tier are:

As you might expect, the mid-level Sibelius (“Penultimate”?)  has some of the above restrictions removed or loosened, while keeping others imposed.

One major benefit: A Sibelius “reader”

If you’re a Sibelius Ultimate user, you might be reading all of this with a big shrug, or even with indignation, like Kevin Costner in Field of Dreams:

When Sibelius First was announced, we hoped and speculated that it would allow non-editable read and print access to Sibelius files created in a full version of the software, even if they exceed the four-stave limitation of Sibelius First — i.e., a “Sibelius Reader”.

Indeed, that’s exactly what Sibelius First does, making it possible for anyone to open, read, play back and print a Sibelius file without purchasing a license.

You can open a MusicXML file in Sibelius First too, meaning that if you’re a Finale or Dorico user and you want to see what your file exported to MusicXML would look like when opened in Sibelius, you can do that.

Sibelius First could very well open up a number of workflows to reviewing scores both professionally and for education. Another benefit is to Sibelius Ultimate users who might be working on a remote computer without a spare activation and need to access or print a score.

Sibelius senior project manager Sam Butler told me, “Sibelius First is our last piece of the puzzle we’ve been creating, so beginners can start their musical careers using the same tools the pros use to create and prepare scores for the top bands and orchestras around the world. The Sibelius product line now encompasses the entire ecosystem of music notation applications and solutions. We have leading publishing tools and software SDKs to build iOS apps that are all built on the award-winning notation engine of Sibelius. This is an exciting step for us to take and we look forward to seeing how the many thousands of new users who have already signed up get on.”

It remains to be seen whether or not Avid’s gambit of offering a free tier will “ultimately” (ha) lead to more paying customers in the long term, but we’re very glad to see some real benefits to all Sibelius users as a result of this product realignment.

Free tiers of PhotoScore and AudioScore to come with Sibelius First

A more cut-down tier of both programs — unsurprisingly called PhotoScore First and AudioScore First — will be included with the new Sibelius First, and will reside in users’ Avid Master Accounts alongside the Sibelius First installers.

New features and improvements in Sibelius 2018.6

The improvements in 2018.6 are iterative, but they do extend the utility of recently introduced features.

What’s wrong with this picture?

Can’t tell right away? What if we add a time signature and another staff to show the quarter notes:

Yes, the grace notes and subsequent quarter notes on beats 2 and 4 are supposed to be aligned in each voice. That’s seriously messed up, but that’s how Sibelius has dealt with this and many other instances of grace notes in multiple voices until now — and no, Reset Note Spacing didn’t help unless you first applied Reset Position. 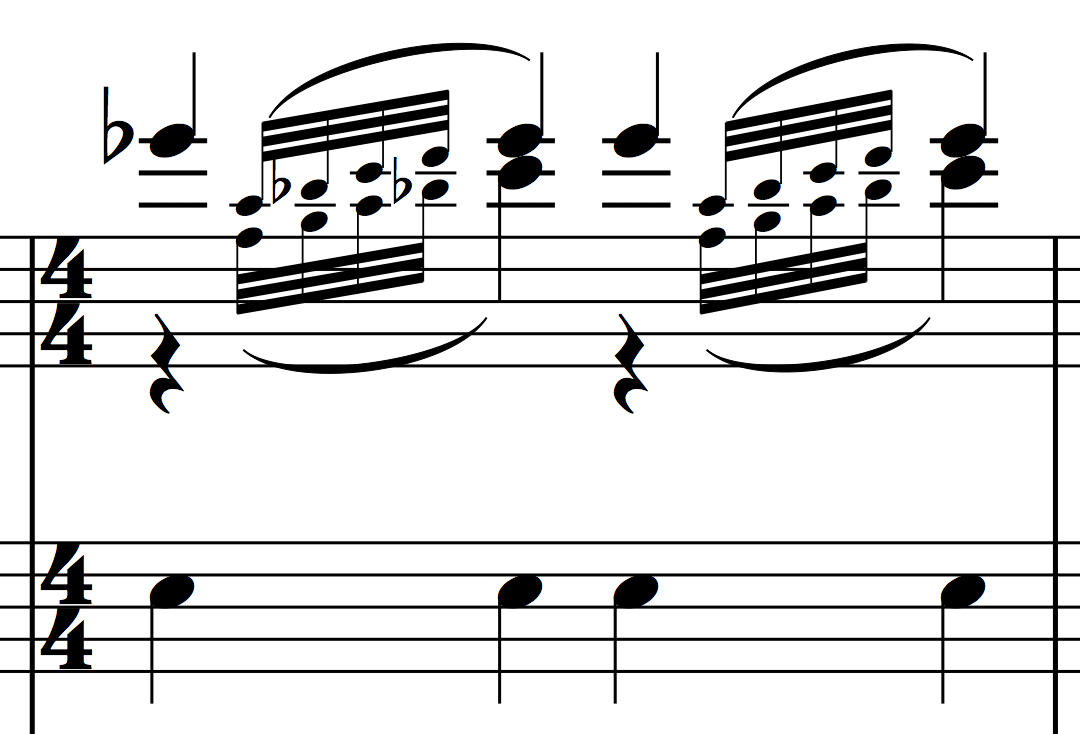 This could still use some refinement, though; Alt-clicking this into another bar sees the spacing go haywire in the destination bar, although thankfully Reset Note Spacing fixes it up.

To help with note spacing, Sibelius 2018.6 also automatically applies hidden rests in instances where the number of grace notes in the voices is unequal:

Scores created in a previous version will not be affected unless you turn on Version 3 spacing in Appearance > Engraving Rules > Notes and Tremolos > Notes > Voice position rule.

The results here are generally better than before, but I’m not sure about the approach and if it will have unintended ramifications, like if you decide to later delete one of the voices or copy only one voice to another bar with hidden rests intact. Depending on the order of operations, you could end up with something undesirable, like this:

Although the effort is appreciated, applying hidden rests here seems more like a temporary workaround than a more permanent fix to Sibelius’s note spacing algorithm. Hopefully this is the start of more improvements to come in the area of grace notes (stem length being another one on the wish list).

Version 3 note spacing continues to be refined. While most spacing situations were improved, chords with back-to-back stems collided when compared to Version 2, and there were also instances of stems touching ledger lines. These are now fixed in Sibelius 2018.6.

In addition to the above changes, spacing of multi-voice passages containing unisons or 2nds has been improved, as in these instances: 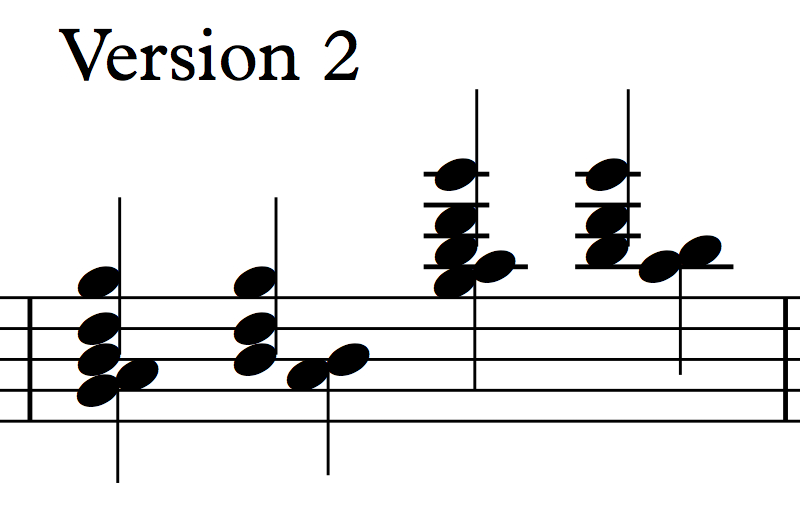 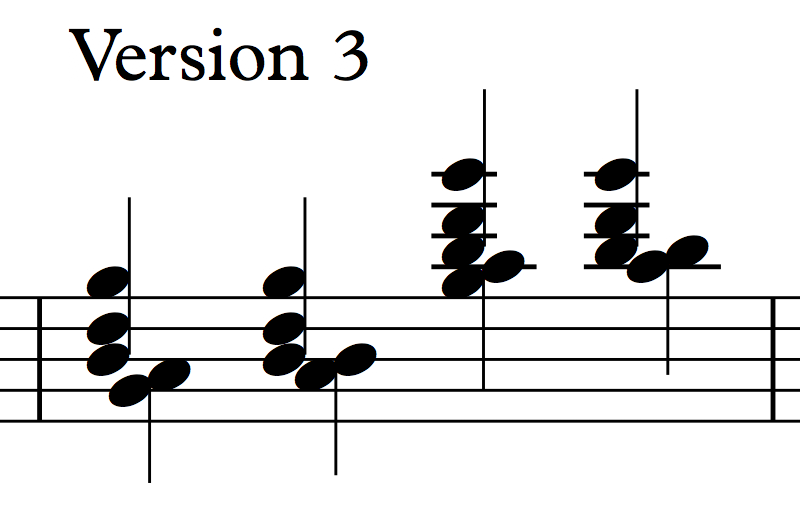 Changing notes across a tied passage

Sibelius 2018.4 introduced the ability to move all tied notes simply by selecting the first one and dragging it with the mouse or using the Up/Down Arrow keys. However, this limited the feature to diatonic changes. Now in 2018.6, support for the Shift+Page Up/Down shortcut to move the notes chromatically is added.

In Sibelius 2018.4, an improvement was made where deleting the first bar of a score no longer deleted all of the system text attached to that first bar that you would ordinarily like to keep, such as the title, composer, initial tempo marking, etc., as happened in all prior Sibelius versions. However, there was a caveat: the initial time signature was still deleted, and we hoped that this would be addressed in a future update.

Sibelius 2018.6 uses the same file format as Sibelius 8.6 and later, so files created with 2018.6 will open in those versions without further exporting required. Be aware, though, that if you are using the Version 3 voice position rule, your music will revert back to Version 2 in versions earlier than 2018.4, and and the spacing of your music will change. It may also change between Sibelius 2018.6 and 2018.4/5 depending on whether or not your music was affected by any of the note spacing issues described above.

It’s worth noting that Monotype’s Plantin font, included with Sibelius since Sibelius 7, is no longer included in the installer for licensing reasons. It will be available as a separate download instead. If you already have Plantin installed on your computer, it will not be removed. Manuscript Papers that use Plantin as their main text font have been updated to use Times New Roman instead.

The Sibelius 2018.6 update is free for all Sibelius users with active subscriptions and upgrade plans. The updated installers are available from users’ Avid Accounts. At the time of publication of this post, updates through Application Manager were not available, although Avid has said that they are working on restoring that functionality.

Today Avid released Sibelius 2018.7, the latest version of its notation software. This is a workmanlike release devoted to fixing...