Earlier this week, MakeMusic released Finale version 27.3, the third update to Finale v27. With this update, Finale adds native installation of eight of the most popular and powerful plug-ins by Jari Williamsson. Now called JW Tools, these plug-ins now install natively with Finale, have been updated to work correctly with SMuFL-compliant fonts, contain fixes for several outstanding bugs and crashes, and will appear in Finale running on Macs with the Apple Silicon chip without the need to open Finale in Rosetta mode.

The v27.3 update also addresses some longstanding issues affecting linked parts, particularly when voicing is used (the process of automatically splitting out one score staff into two parts). In particular, horizontal spacing is fixed with grace notes, as well with the intervals of a second and unison.

This update also includes some other improvements and bug fixes.

Here is the list of items that appears when you open Finale and it prompts you to update: 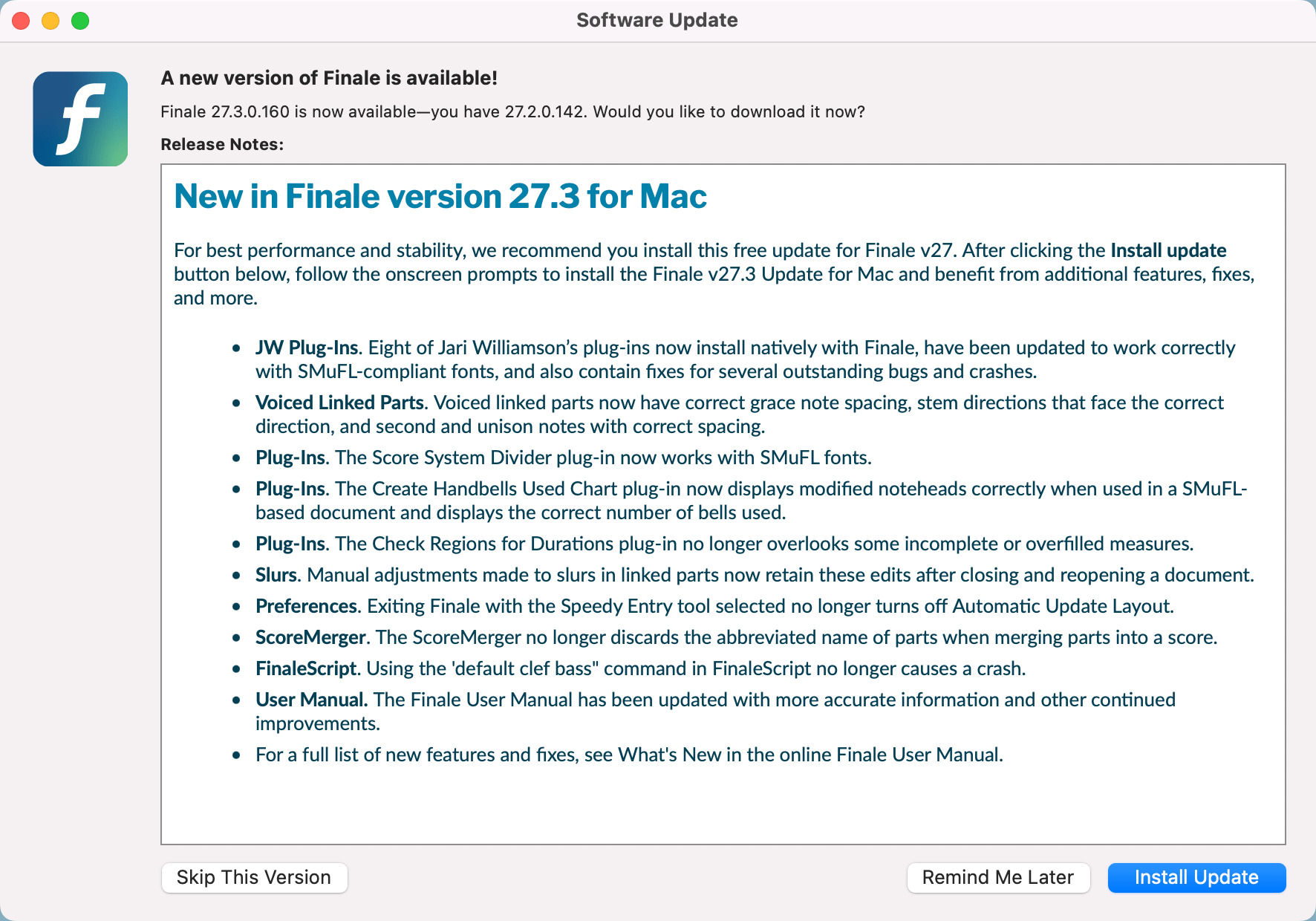 Once again, Jason is out of the gate with a new “Conquering Finale” video which covers the Finale v27.3 update. It will “JW Change” your life!

27.3 may be a rather non-descript version number, but the importance of this Finale release is outsized to the relatively modest rollout it has seen. With this update, Finale adds native installation of eight of the most popular and powerful plug-ins by Jari Williamsson. These plug-ins have been available for many years for free independently of Finale, but you had to be “in-the know” to get them from Jari’s Finale Tips site.

More recently, we had made them available on Notation Central, our marketplace for music notation software technology, as a way of exposing them to more users, but you still needed to manually install them and follow specific instructions to find file paths on your computer — too daunting a task for some users.

Although those barriers to entry were surmountable, one creeping problem could only be solved either by MakeMusic or Jari himself — the fact that, as progress marches on, the plug-ins themselves started to malfunction as they became incompatible with either the latest versions of Finale (SMuFL fonts caused problems) — or the latest computer software or hardware. For instance, the plug-ins did not open on Macs with the Apple Silicon chip, such as M1. Even though Finale is Apple Silicon-compatible, you needed to open Finale in Rosetta mode to use the plug-ins.

This problem could really only be addressed either by Jari or MakeMusic directly. With Jari winding down his many years of herculean and generous contributions, thankfully MakeMusic stepped in and has taken responsibility for eight of these plug-ins (and hopefully more in the future; we will see). Now, these tools are compatible with the latest versions of Finale, and, crucially, do not require any special installation process, making them available literally to everyone that has the latest version of Finale.

If you install Finale 27.3, you will see a new JW Tools submenu in the Plug-ins menu: 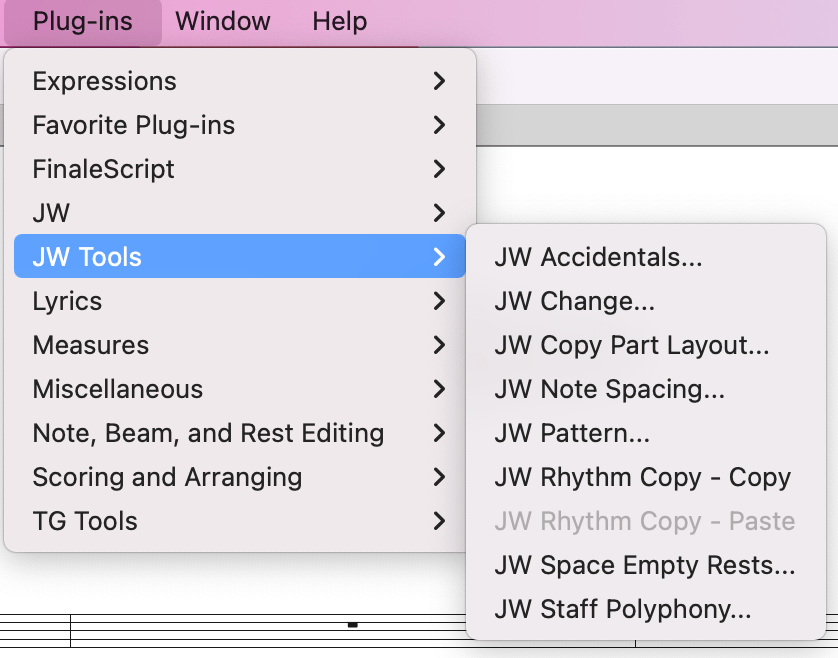 As mentioned earlier, if you have a Mac with an Apple Silicon chip, it is no longer necessary to run Finale in Rosetta mode to use these plug-ins, unless you need to use other third-party tools like other JW plug-ins or certain VSTs.

Something else that is un-Finale-like — in a good way — about the JW Tools is that they are modeless, meaning that you can work in your score and continue to have (one or several) dialog boxes open, without needing to interrupt your work and open and close each one every time.

Although this is not very helpful on a single-display setup… 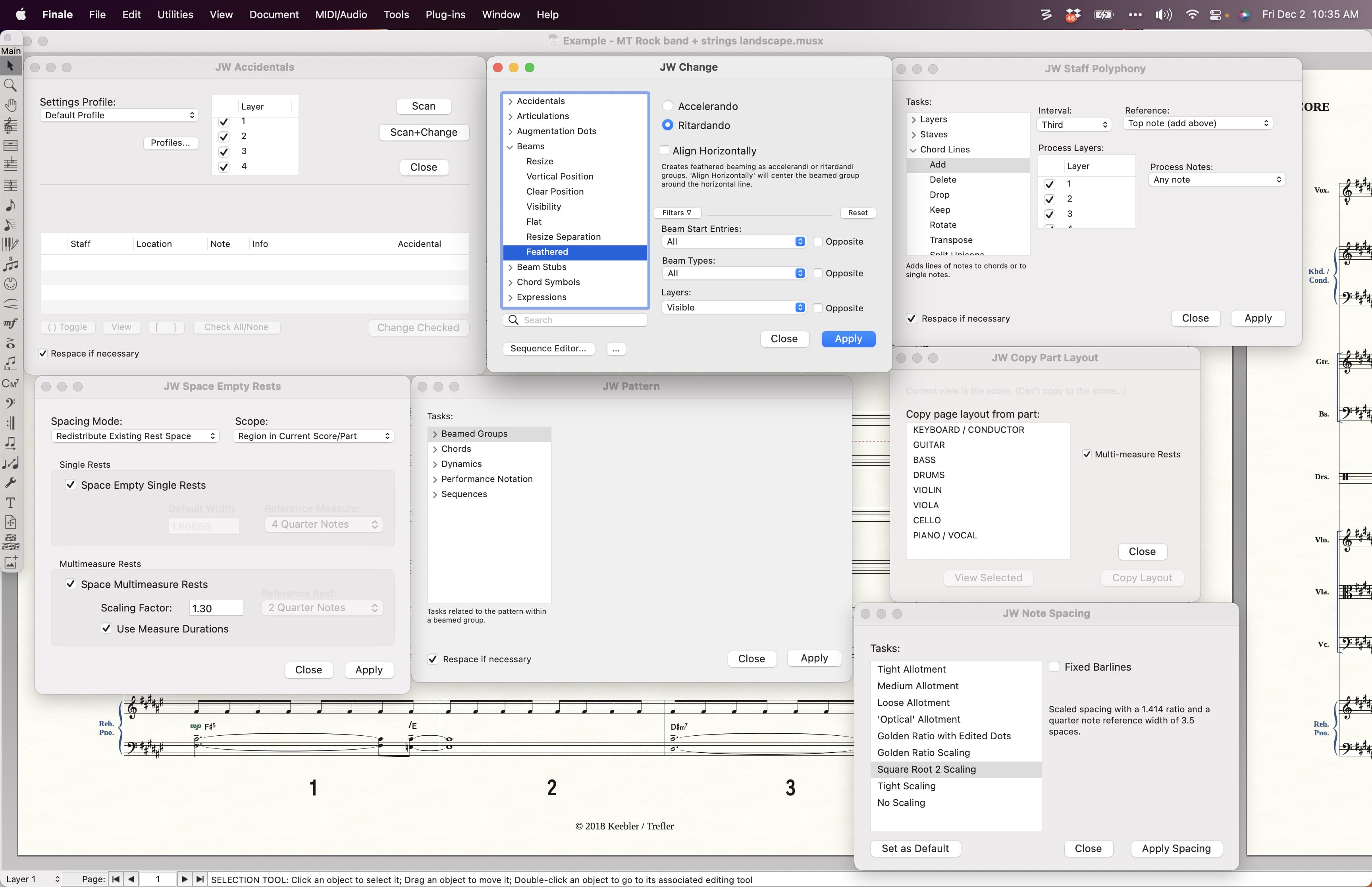 …if you have two or more displays, you can shove all the JW Tools onto a secondary display for a dashboard of power tools at the ready whenever you need them. 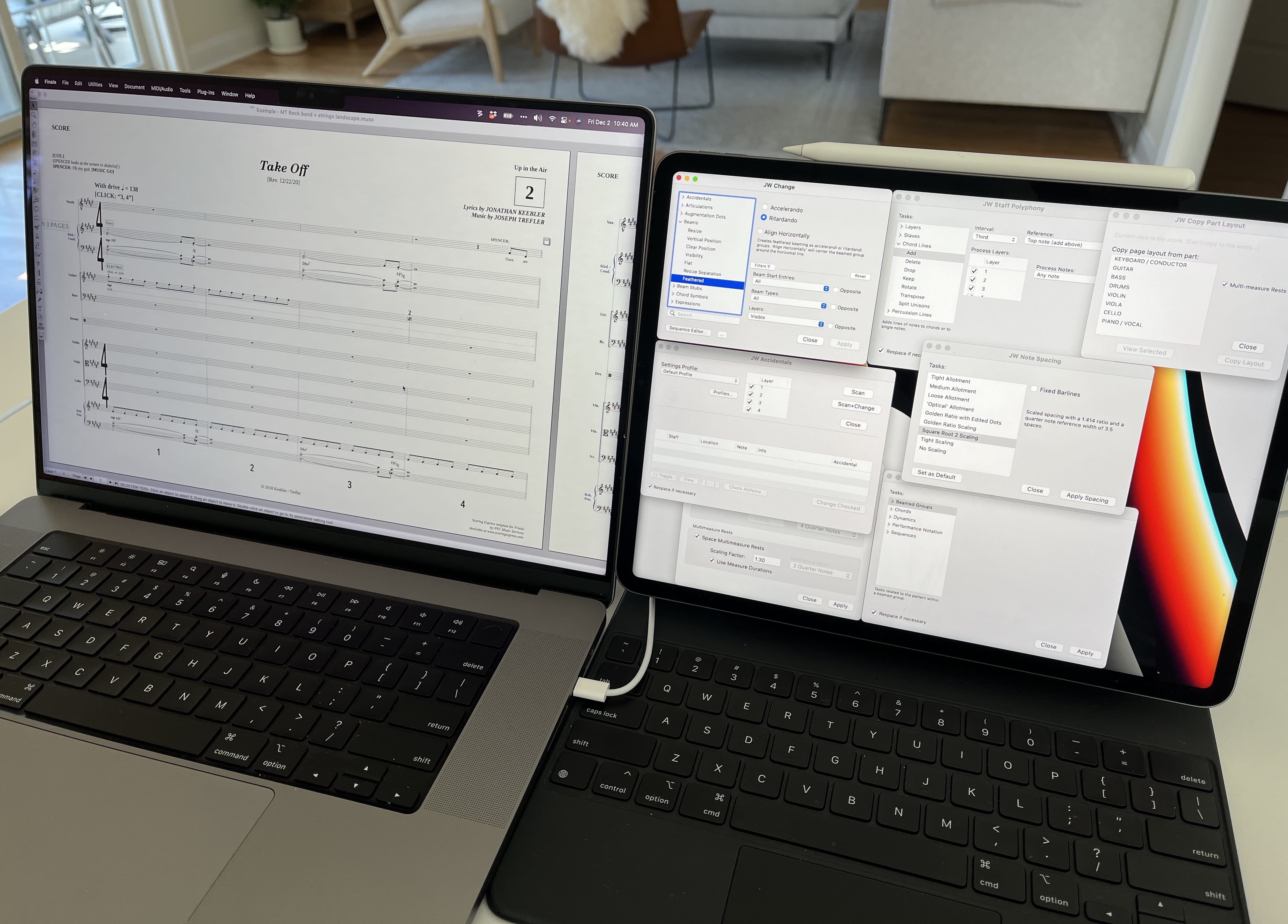 Another benefit of this update: All the JW Tools are well-documented in the official Finale manual, on Mac and Windows. We’ve also linked to the documentation for each one in the list above.

Let’s face it — these tools are the types of features, that, if you were designing music notation software anew, you would build directly into the program. But Finale has 30+ years of legacy code to contend with, so ultimately how the features are added is less important than the fact that they are in there one way or another. We cannot overstate the importance of this update, which makes quick work of what could otherwise be laborious and tedious.

This is very good news for all Finale users and will make a profound day-to-day difference for anyone that works with Finale.

Finale has long had the ability to not only have parts in the same file that are linked to the score — table-stakes for modern notation software, but revolutionary when it was first introduced in Sibelius 4 and Finale 2007.

Voiced linked parts, however — two separate parts that are based on the same one staff in the score, and attempt to separate out the voices — is a thornier challenge, and one that Finale has achieved with mixed results.

Finale v.27.3 fixes all of the above issues. Longtime Finale users who have contended with these deficiencies for a decade and a half will be delighted at the news. You should find dealing with grace notes, stem direction, intervals of a second and a unison, and scenarios with ties where the layers are separated by the interval of a second much better behaved — and if they’re not precisely to your liking, you now have full access to the Special Tools to adjust these elements further in the part without disrupting the appearance of the score. In addition, manual adjustments made to slurs in linked parts now retain these edits after closing and reopening a document.

Other improvements, fixes, and availability

There are a handful of other improvements and fixes in this release.

Here are a highlights of a few others:

Finale v27.3 is a free update for anyone who has already purchased Finale v27, and can be downloaded from your MakeMusic account, or directly through Finale, if Check for Update is selected.

If you don’t already have Finale v27.3, now is the best time to get it — they’ve significantly reduced prices on both new licenses and on upgrades, and they have extended their Cyber Monday sale through today, Friday December 2, for even further discounts by using the promo code CYBER22 at checkout.

Whether you're enjoying some lobster bisque, listening to Yo-Yo Ma, or simply tending to your Pez dispenser collection, the release...

A roundup of some recent news including an extension of the Dorico crossgrade deadline, Finale third-party 64-bit plug-in updates, a...