Today MakeMusic released version 27.1 of Finale, the first maintenance update of the v27 series. Building upon the support for Standard Music Font Layout (SMuFL) which was first introduced to Finale in the June 2021 release of v27, the v27.1 update brings deeper SMuFL integration into Finale.

Most importantly, beginning with this update, it is now possible to convert documents using legacy non-SMuFL music fonts into documents that use SMuFL-compliant music fonts. SMuFL-related updates to Human Playback, important bundled plug-ins like TG Tools Easy Harmonics and Easy Tremolos, the Symbol Selection dialog, and new libraries that use the SMuFL-compliant Finale Maestro font all go a long way toward cementing SMuFL as the way of the future in Finale.

Rounding out this update are some fixes, particularly to MusicXML, in which very large files can now be successfully imported into Finale, and exported MusicXML files now correctly capture tempo data in metronome marks, even if playback is not set in the text expression (a long-standing issue, and welcome fix, if you ever need to get Finale files into other music notation software).

Let’s not delay further. If you want to “conquer” Finale v27.1, look no further than this latest entry in the “Conquering Finale” series, which takes you through all that’s new in this update.

Finale v27.1 will now convert non SMuFL files into SMuFL files. That’s a big deal. It’ll still recognize both forms of fonts. So you can still use non-SMuFL fonts in Finale, and you can also use SMuFL fonts.

If Finale v27 was “The Great SMuFL Divide” because of the inability to convert legacy files in that initial release, Finale v27.1 bridges that divide — but it’s a one-way bridge because you can only go from non-SMuFL to SMuFL. Understandably, philosophically it’s forward-looking, and it likely would have been a lot more complicated to go backwards.

In your legacy file, you’ll see that Maestro is selected, but find the SMuFL version of Maestro, which is called Finale Maestro.  When you do this, there is a new option in this window: Import Engraving Settings from SMuFL Font: 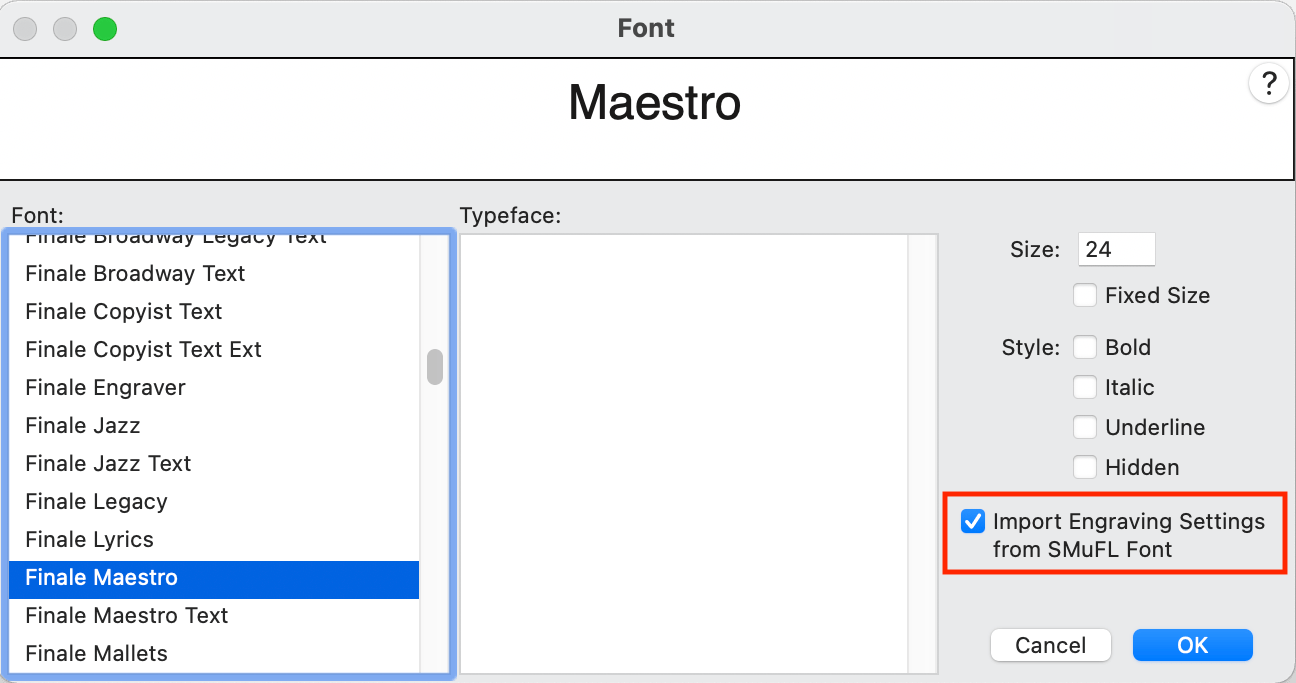 All of the SMuFL fonts have these metadata contained in a JSON file, which have some interesting information about some of the engraving settings that accompany the fonts. So each font can have certain settings staff line thickness or certain spacings for different characters, and so on, which is built into the font itself. Now in Finale, you can import those settings directly from this window, which will update your document accordingly.

This allows you to get the full benefits of all of the design elements of a SMuFL font in a Finale file in one click, without laboriously changing each engraving setting manually.

Dealing with legacy files is a challenge for any software, and the feat is quite impressive. All of the glyphs in these legacy fonts, upon conversion, use only the Finale Maestro font:

Keep in mind that Finale Maestro is the most complete font of all of Finale’s SMuFL fonts. So there is some some trickiness in that if the SMuFL font that you’re using doesn’t have a glyph from your legacy file, you’re going to get like a question mark glyph in your score. There may be other things that might not look exactly right, and Finale does warn you before proceeding: 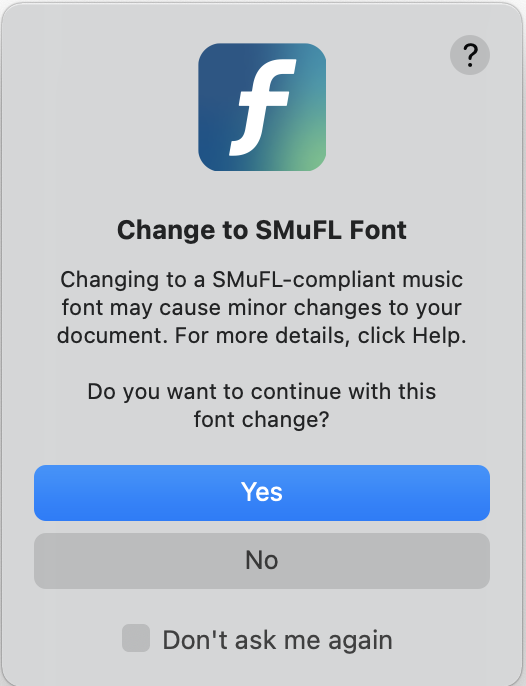 But compared to v27.0, converting from non-SMuFL to SMuFL is relatively painless, and should go a long way toward easing the transition for users that want to take advantage of all that SMuFL has to offer.

Now that we’ve covered conversion, let’s start looking at some of the other SMuFL-related improvements.

Tremolos, pedal markings, trills, and many ornaments which did not play back correctly, or at all, in v27.0 now do so, in a SMuFL-based 27.1 document.

The bundled TG Tools Easy Harmonics, TG Tools Easy Tremolos, Create Coda System, and Drum Groove plug-ins have been updated to use the correct characters in SMuFL fonts, and thankfully work as expected once again.

A lot of times it can be tedious to go through a Finale file and, for instance, add all of the accordion symbols. In earlier versions you would have to create a new expression, add it, create a second expression, add the second one, creating a third expression… you get the idea.

So one way Finale v27.1 helps us out a little bit is with the inclusion of new library files, which you can now load into your file via File > Load Library. 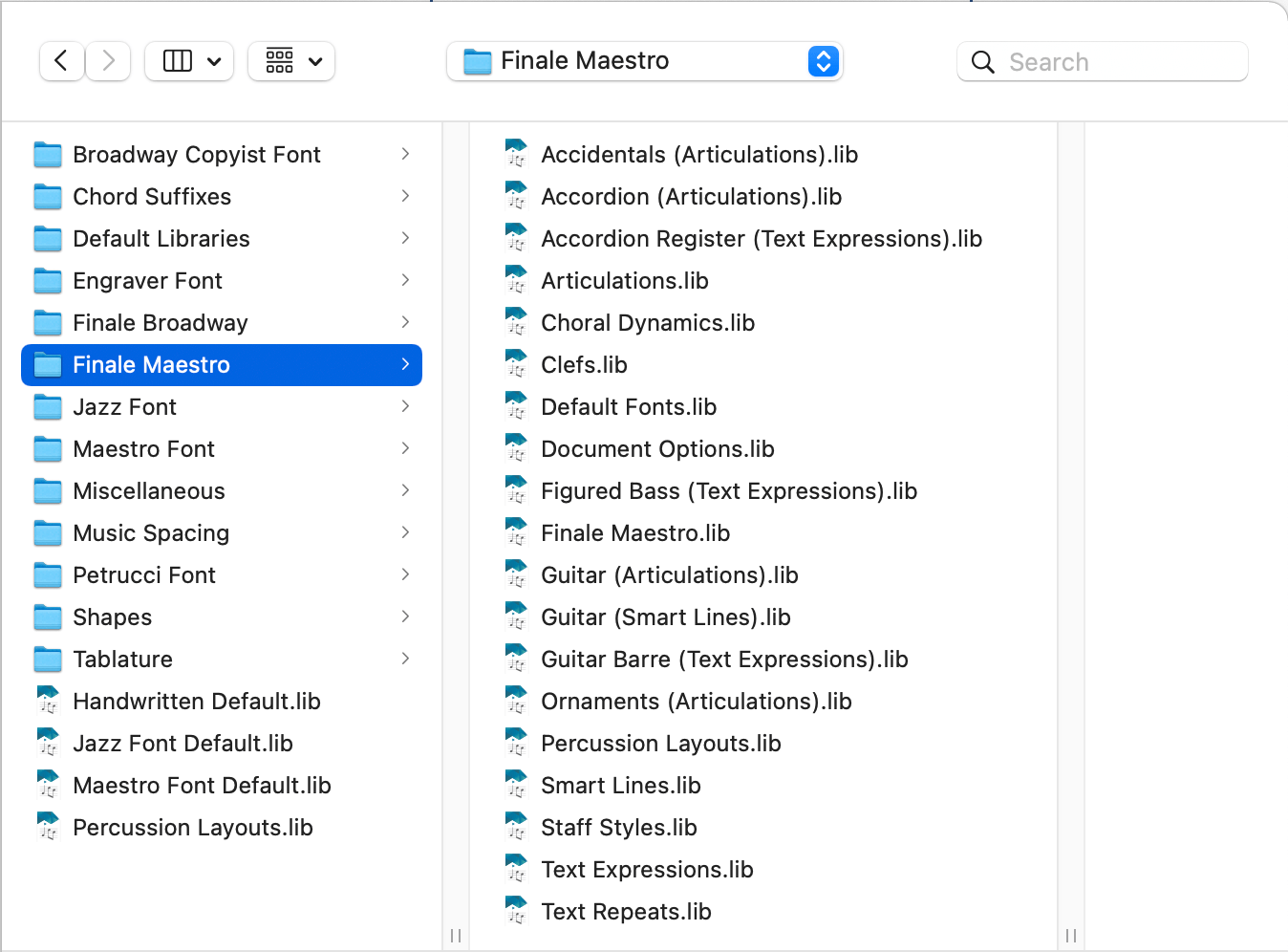 This makes adding expressions and articulations much easier: 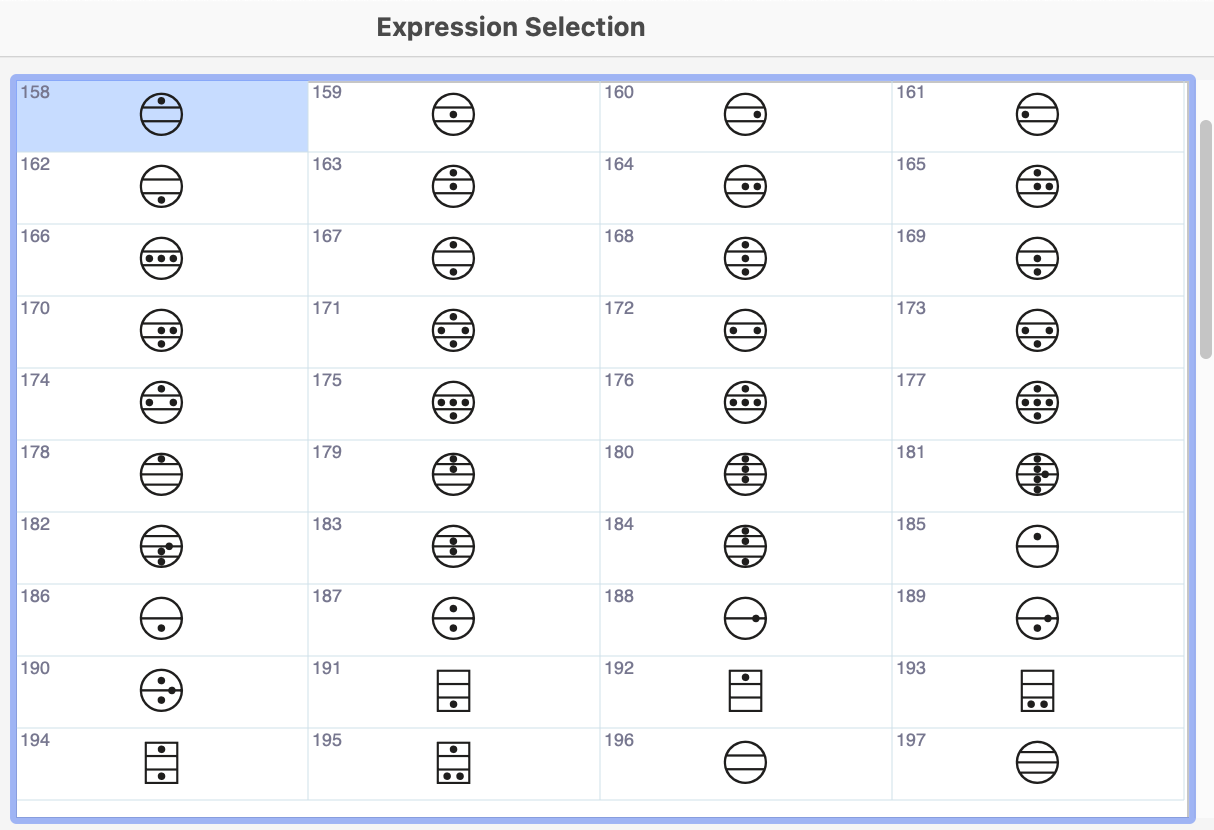 In Finale v27.1 it’s mostly the SMuFL things that are a huge deal. There are, however, a few disappointments which may depend on the type of user you are and how you use Finale.

As mentioned, there is no conversion backwards from SMuFL to non-SMuFL. For some users that deal with a lot of different people on different versions of Finale, sometimes it is important to actually go from SMuFL to non-SMuFL. I actually ran into this a couple of months ago where I was stuck because somebody sent me a SMuFL file and I was already working with a non-SMuFL templates. MusicXML conversion is possible to get around this, but it’s not as complete as a native Finale conversion. 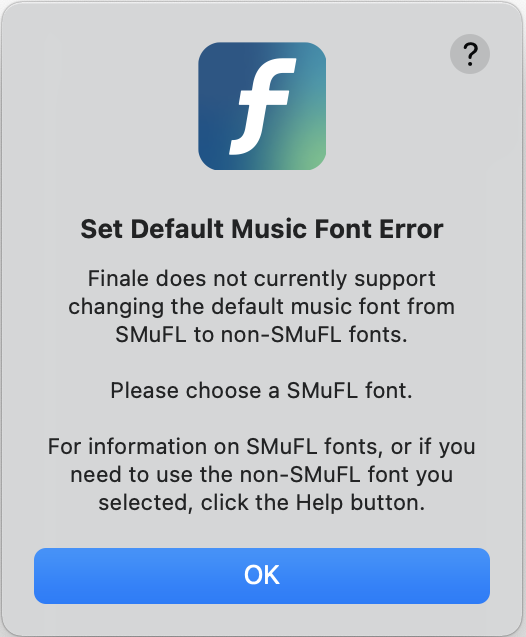 It’s understandable that this is not a high priority, and while this can make this transition era more difficult in the short-term, it will probably become less and less important over time.

Another issue is that when you create a new file with the setup, the only two options you have for getting SMuFL files are the first two: Finale Maestro and Finale Broadway. 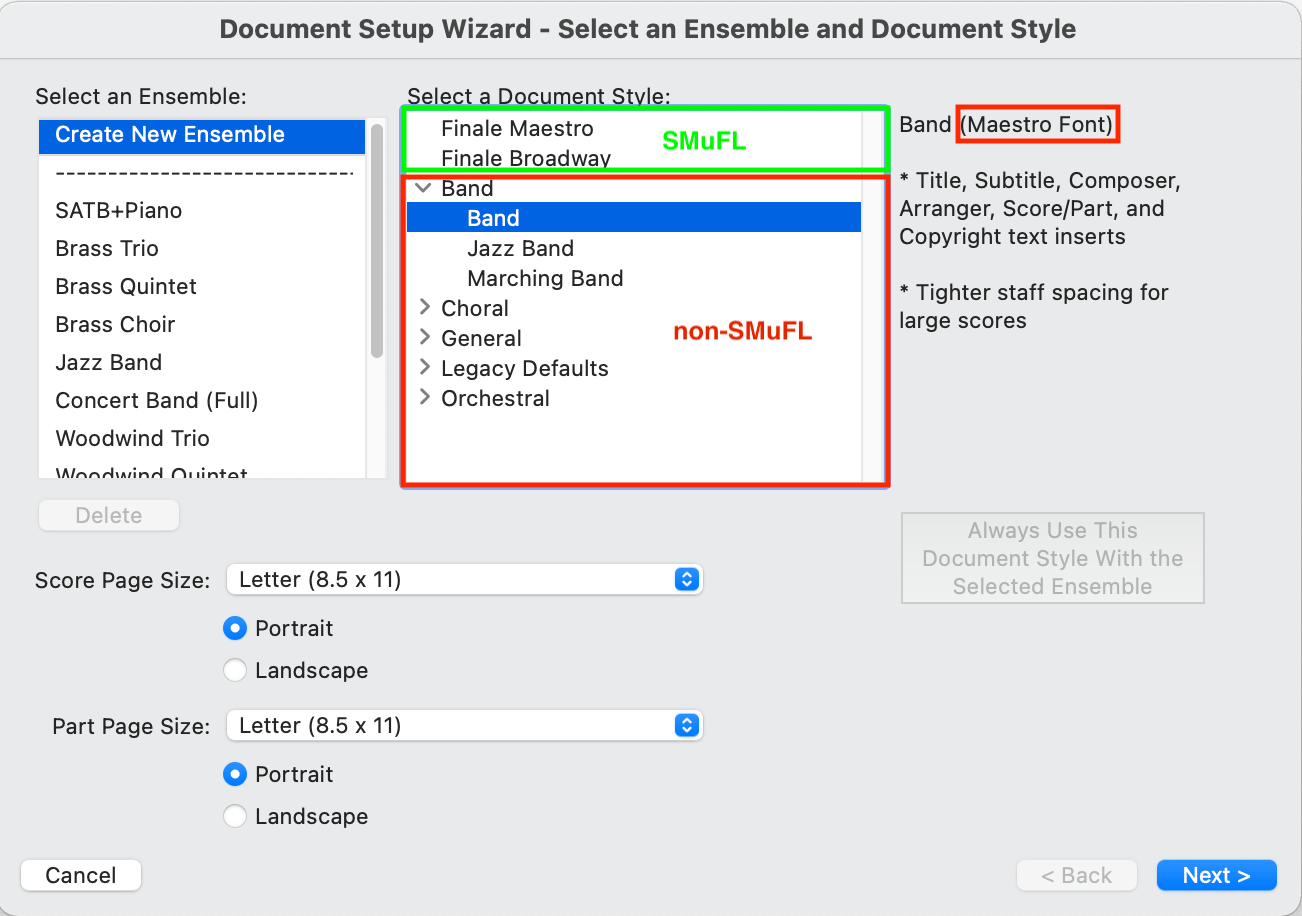 There is no way to directly get, say a Finale Jazz Font SMuFL-based file with the Document Setup Wizard. In fact, all of the templates that uses any of the jazz fonts are still non-SMuFL. This a bit disappointing, because anyone who creates Finale files from templates via the Setup Wizard will not be able to enjoy the benefits of the SMuFL.

It stands to reason that perhaps in version 27.2 or another future Finale version, the wizard options will be SMuFL-compliant, which will be a welcome change.

The other piece of this is that if you try and choose New Document From Template, Finale will navigate you to where the templates are in Finale, and once again, all of these templates are non-SMuFL:

Hopefully in time these will be updated to SMuFL-based files.

If v27.0 was the sort of soft opening for Finale 27, then v27.1 really does feel like the grand opening with respect to SMuFL. In our opinion, this is the version 27 that we all needed and wanted from the start. The gripes we have are basically that not all of Finale’s valuable assets have been fully updated yet to take advantage of this leap into the future, but sooner or later we expect that to happen.

You can start to see the realization of the benefits that using SMuFL fonts provide to Finale. Conversion is a huge deal, as is updating the document settings to use the font’s metadata. For anybody that has an old file created in something previous to version 27, it’s very easy to open that file in 27.1, convert it to a SMuFL font-based file, and enjoy all of the extra characters that exist in the Finale Maestro or other SMuFL font.

Finale v27.1 is a free update for anyone who has already purchased Finale v27, and can be downloaded from your MakeMusic account, or directly through Finale, if Check for Update is selected.

For a limited time, all NorFonts distributed through Notation Central are on sale at up to 60% off. This is...