Three significant improvements to lyrics have been made in Dorico 3 (and boy, do they speed things up)!

The first of these is the ability to copy lyrics en masse and then paste syllable by syllable; a feature that should be familiar to both Finale and Sibelius users. Unlike Sibelius, Dorico can’t split copied text into syllables automatically, but a free third-party resource makes the job easy.

In this example (Charles Wood’s setting of Never Weather-beaten Sail) I’ve copied and pasted the lyrics into Juicio Brennan’s Lyric Hyphenator, hit the Hyphenate My Text button, then copied again. Then in Dorico, I selected the first note, typed Shift+L and then hit Ctrl/Cmd+V repeatedly, stopping only to add spaces where I run into melismas. It’s rapid and accurate.

So far, so normal. Where this feature really comes into its own is in situations where lyrics are similar but not identical. In Dorico 2 (and many other programs), putting a lyric in the wrong place is a bad idea. In Dorico 3, it’s probably the quickest starting point.

If I copy my Soprano lyrics down to the other three voices, many of the words will be in the wrong places, and Dorico 3 still won’t automatically update the lyric extenders. On the other hand, when I see lyrics that don’t fit, I can select them and go back through the process of  cutting, invoking the Lyrics popover and pasting.

If you’re blessed with particularly sharp eyesight, you may have noticed that there are some errors in the text I initially pasted in. In earlier versions of Dorico, the answer would have been to go through each line of music hunting for mistakes, and selecting each syllable and invoking the Lyrics popover.

This is no longer necessary. Select any lyric, and go Edit > Lyrics > Edit Line of Lyrics (or set a custom keyboard shortcut for it). The following dialog appears: 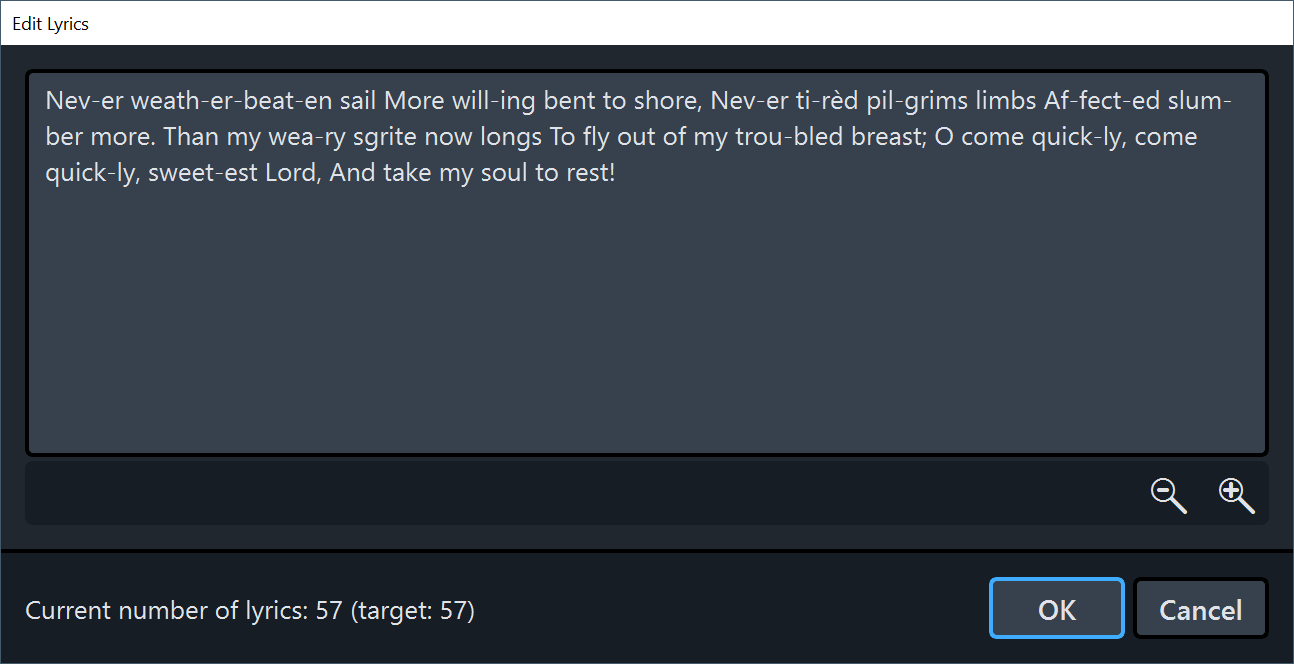 You can swiftly look at just that line of lyrics, out of context, and tidy up the spelling and punctuation in one go. If you need to re-hyphenate words then there’s a nifty counter at the bottom to help avoid silly mistakes. One caveat here, particularly for Finale users: lyrics aren’t linked. If you’ve got one “sgrite” in the Sopranos, and another in the Basses (or even one in the first verse and one in the second), you need to fix each instance separately. On the one hand, this might be a missed opportunity for some efficiency; on the other hand, by keeping each instance separate, Dorico avoids the interconnected tangle of lyrics that tends to result in editing headaches.

Last but not least, the vertical position of lyrics can finally be adjusted on a line-by-line basis, from Engrave mode. Simply grab any lyric and drag down (or use the relevant keyboard shortcuts), and the whole line will move. These offsets are hidden, so the only way to reset them is from a new Engrave > Lyric Offsets submenu. Cursory testing indicates that vertical offsets live with whichever syllable is currently first on the system. As long as you’re aware of that, Dorico’s behavior when reflowing music is predictable.

Dorico 4.0.20 is out with improvements to the jump bar, a quick tool selector for the Key Editor, and easier...