Writing for harp is extremely difficult. It takes years of experience to even hope to produce an advanced part that survives the critical glare of the professional harpist. Inexperienced orchestrators will often mishandle guitar and timpani, but no instrument has been so abused at the hands of composers as the harp. It is truly the instrument from planet Xenon.

Among the many issues one encounters when first dealing with the concert harp is the matter of pedals. The concert harp has seven pedals disposed around the foot of the instruments, three on the left and four on the right, each dealing with a single note of the C-flat major scale (and affecting all octaves for each note) that can be depressed to sharpen those notes once, and then twice. There have been plug-ins written for other programs dealing with pedaling, and those were wonderfully helpful, but nothing can compete with a dedicated feature.

The critical difference between Dorico and other programs is that it knows what I call the “state of the harp” at any given position in the score. What do I mean by this statement?

Every conductor doing a piece containing much chromatic writing for harp will have experienced countless situations where “Back to letter D, please” means waiting for the harpist to look at how the progression of pedal-work leads to a particular pedal configuration at letter D (either backwards or forwards). This happens because the harpist may not have a mental snapshot of which pedals are flat-natural-sharp at any given moment in the score.

Dorico, however, has that very snapshot at your beck-and-call. As a result of this knowledge, Dorico warns you that the notes you have written cannot be played with the harp in its current “state” by coloring them bright red (once  View > Notes And Rest Colors > Notes Out Of Range is turned on). You can then do one of two things.

No matter what you do, however, Dorico will constantly warn you. If you change a note later on and it affects pedaling, red notes will suddenly appear to help create a different set of pedaling diagrams, all because Dorico always knows the “state of the harp”. Even trilled auxiliary notes will show in red if they cannot be played in the current “state”.

If all else fails with the “calculate” command and you want to perform a manual pedal change: no problem. Harp pedals in Dorico are playing techniques and can be written-out manually using the Shift+P(Playing Techniques) popover. The characters ^v- can be used to indicate flat-sharp-natural using the standard pedal order of DCB|EFGA.

Any pedal diagram can be selected and edited by pressing Enter. The diagrams can be done in diagram format, which is useful for the beginning of a flow, a new section after many bars of rests, or a reminder of the “state of the harp” at appropriate moments. For the remainder of a part, they can be written as partial pedal changes with note names. 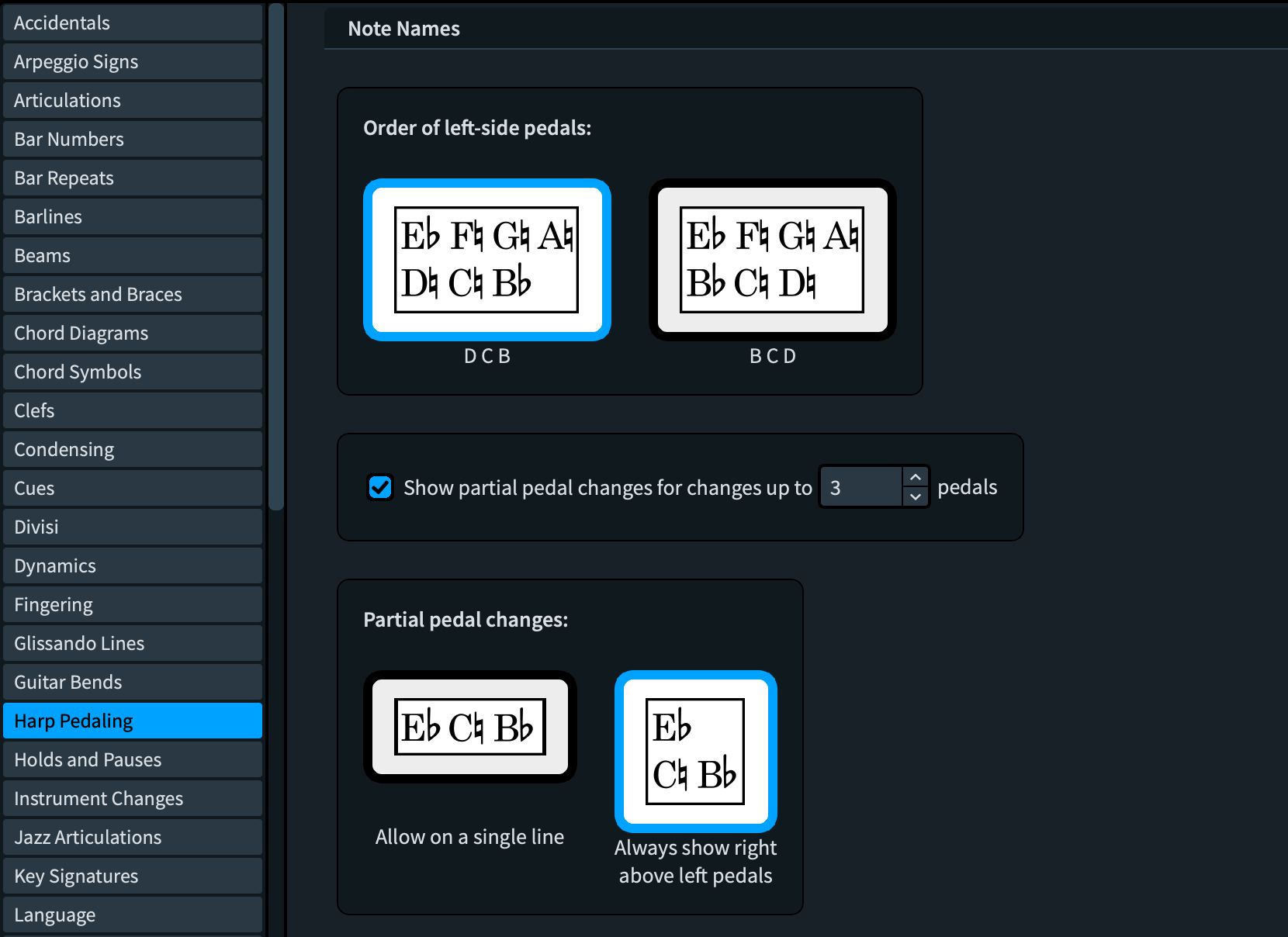 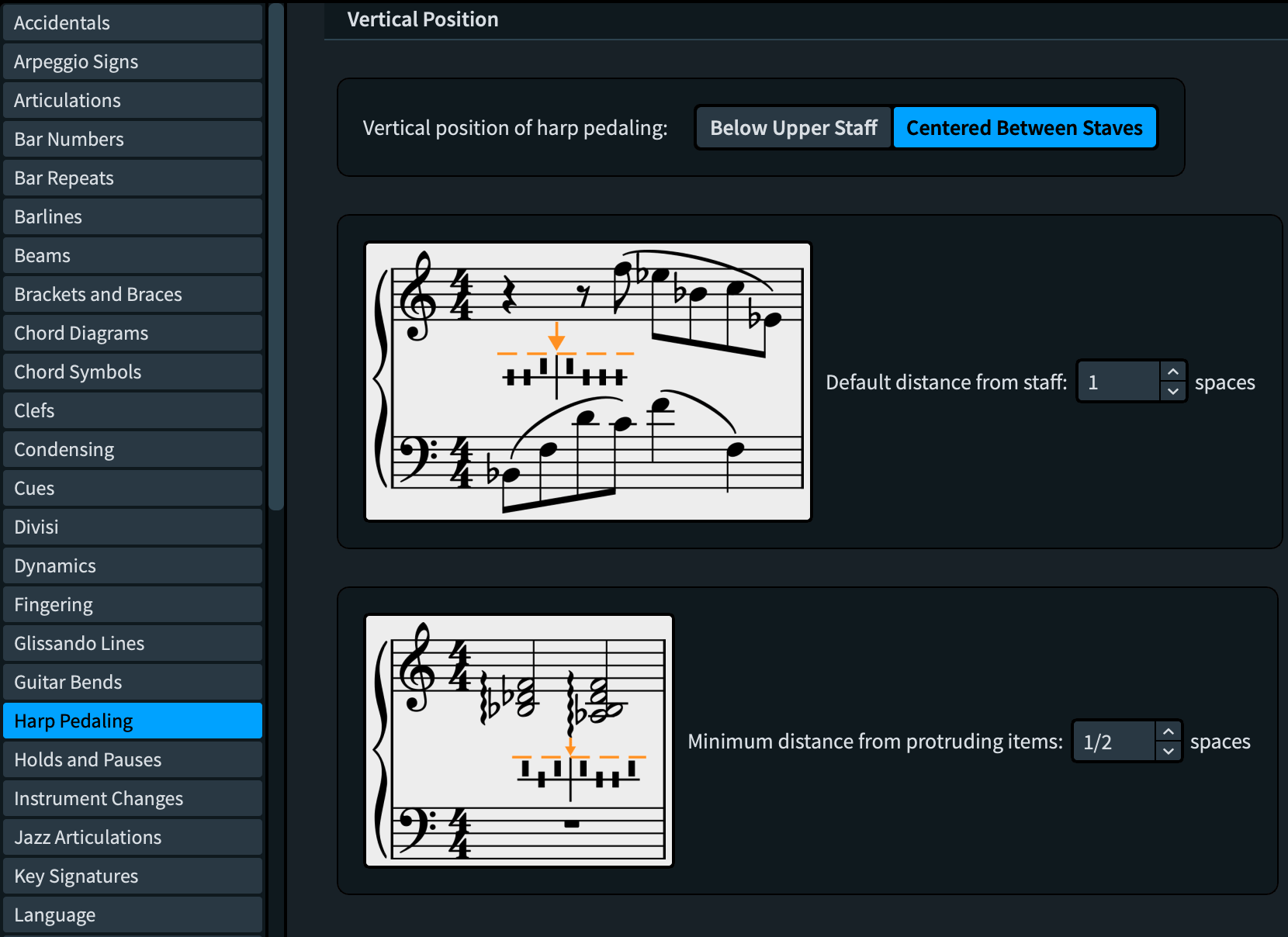 You can even have pedal diagrams in the part, but not in the score, where the diagrams have their own signposts. Speaking of signposts, those (as well as the diagrams themselves) remain “intelligent” no matter what you do. They can be moved, copied, pasted, etc. One really understands how contextually “intelligent” they are once you start moving them with Alt+Left or Right Arrow and see red notes appear and disappear as the diagram moves along.

So, what’s missing? Well, not much. Salzedo’s method of crossing the left foot to E or the right foot to B when available (and notated with the affected pedal showing a boxed note name) is not supported but can always be worked around with text; it is also very rarely used. Additionally, Dorico does not notate extension lines or dashes to indicate that the harpist should keep his/her foot in position on that pedal because it will be used in the next change. Extension lines are cumbersome, but dashes would be most helpful and will hopefully be implemented in the future. It should be noted, however, that there is no such native support in any other software for those advanced notations and that harpists tend to pencil them in.

Here is a more complex example of an arrangement I did as part of a recording project involving a children’s choir in 2004. The idea — as the title of this well-known folk-tune implies — was to create balalaika-like effects using enharmonics on the harp. Working closely with the harpist, we settled on this version after a couple of back-and-forth editions. While there are definitely more difficult harp parts out there, this one is still tricky and requires fast feet. Redoing the part on Dorico for the purpose of this review was a pleasure. Running the tool at strategic moments allowed me to duplicate the pedaling timing favored by this particular harpist, and I could always edit the diagram itself in the popover if I wished to limit the amount of action to a bar or even a beat. I added a “reminder diagram” on page 2, and manually lined-up some of the pedals to have better separation between feet, something some harpists might find helpful, although in this case the left foot stays on the D pedal until the penultimate measure of the last bit of passage-work.

There is one other improvement related to harp pedaling in Dorico 3. You can now trill to a doubly augmented or diminished note. The following is a D flat to E sharp trill, which on the harp is played on consecutive strings, but is, in effect, a tremolo of a major third. A powerful feature, but be sure you know what you’re doing here! 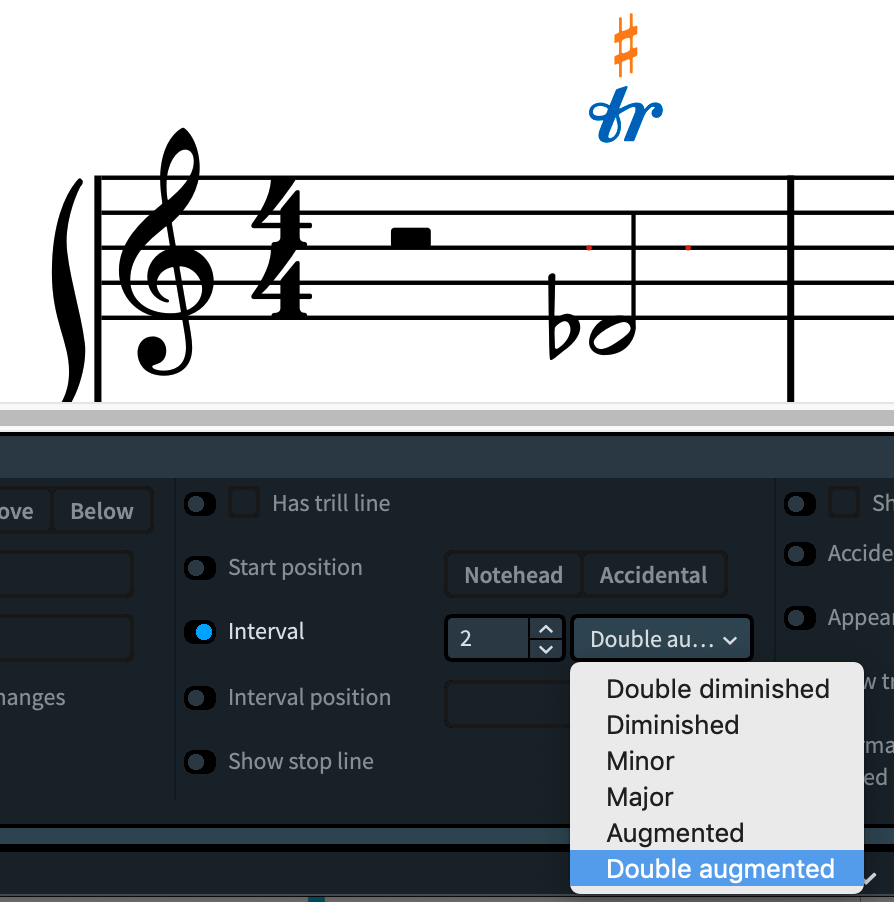 In short, the harp tool is top-notch. There is nothing comparable to Dorico for sheer elegance and usefulness when it comes to dealing with the thorny issue of harp pedals.

A clever font makes it easy to enter harp pedal settings in a musical way, in any notation program, without...