Dorico users and keen readers of this blog are well aware of the software’s philosophical underpinnings: a commitment to first principles and representing notation semantically. In other words, the program is organized around the meaning of notational elements, as opposed to what they look like.

Too highfalutin for you? Let’s take an example, in Dorico.

It’s a simple indication of “sul pont.” — bowing on the bridge.

In Sibelius this would be entered in as text; after all, it looks like text, right? Similarly, in Finale, you’d put this in as a text expression.

In Dorico, though, this is known as a Playing Technique. Yes, playing techniques can be text, but they can also be graphic symbols, or — as we’ll shortly see — lines. Remember it’s not what it looks like, it’s what it means!

What’s the big deal, you say? It all looks the same. Indeed, as entered in Sibelius, it looks a lot like the Dorico example.

What if you want to indicate to the player a steady change from “sul pont.” to “sul tasto” (bowing on the fingerboard) to the end of the tied note? A common way to indicate this with an arrow.

Well, in Sibelius and Finale, you’d add your “sul tasto” text at the end of the note, and then create an arrow via the Lines gallery, because, you know, an arrow is a kind of line:

And if you’ve used notation software prior to 2019 you’d think not much of it and go about your way. It all seems perfectly reasonable. Except that, if you think about that arrow, you understand its meaning, but to Sibelius… it’s just an arrow. Sibelius is not ascribing any connection to it and its neighboring text.

Now, in earlier versions of Dorico this was actually difficult to create. Why? Because until then, there was no support for drawing such a simple line. We must have meaning!

Or use the popover Shift+P during step-time input from the playing techniques popover, for example by entering sul pont->, advancing the caret, then entering sul tasto.

They can also be created outside note input by selecting two locations in the score and typing sul pont->sul tasto into the popover.

Notice how, if nothing was entered at the end, Dorico would have drawn a hooked line. This will also revert automatically if “sul tasto” is deleted:

A plethora of styles can be found in the Engraving Options > Playing Techniques > Continuation, or on a case-by-base basis in Properties: 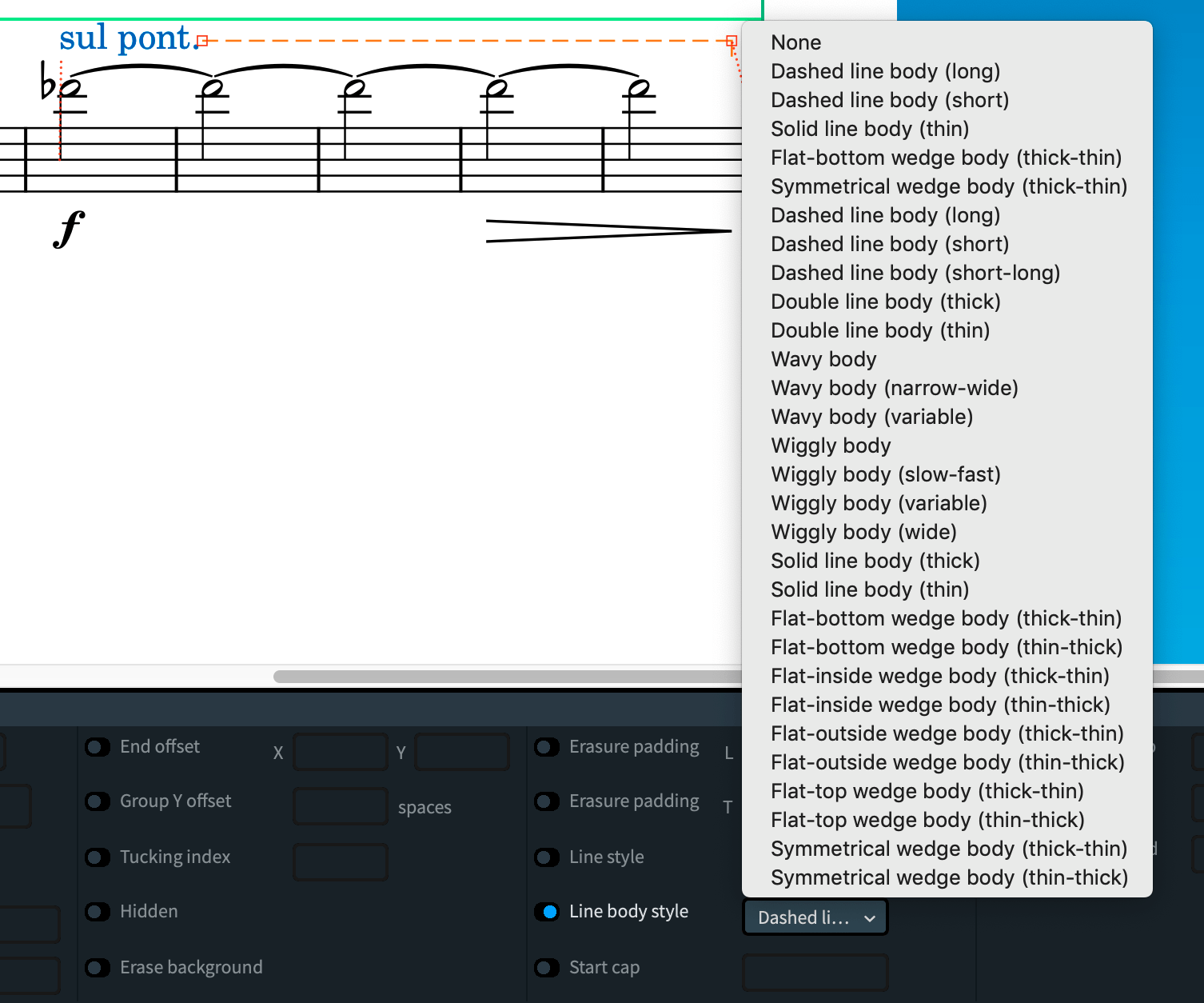 This can be customized further, as in this example.

Dorico provides a variety of common line and arrow types. Dashed and solid lines can be terminated with a hook, solid arrow, outline arrow, or terminal line. Wavy lines of various levels of waviness, plus wedges of different shapes are also available. There isn’t a fully fledged line designing tool yet, but it covers the vast majority of the cases in published contemporary music, and offers some interesting graphical capabilities when combined with the tweaking available in Engrave mode. More controls and options are of course promised for the future.

Overall, grouped playing techniques in Dorico 3 provide a solid upgrade to the functionality previously available, and open up Dorico to the world of contemporary music which often makes liberal use of such notations. Most importantly, it reaffirms the approach to notation that Dorico has forged, where you don’t have to traverse different sections of the program to input items that belong together semantically.

We can expect further improvements in future, but most people will find that this “box” is now “ticked” and Dorico has everything they need in this area.