So, without further ado, my apologies for the delay; there was just so much cueing that I had to do.

The specific areas that are covered in Dorico 1.2 are fingerings for keyboard, brass and string instruments. Since the program actually takes the context of an instrument into account, such a distinction means more than just a few more special symbols being available — in fact, the same basic input can often give quite different results, depending on the instrument it is applied to.

As with most “secondary” notations, fingerings are entered through a popover. To summon it, select a note or chord in Write mode and then either click Fingerings or Shift+F. Generally, Dorico will distribute the numeric input in a straight-forward way onto the selected notes; there are some sophisticated details that we will look at in a minute.

The key for understanding the power (and some current quirks) of the feature is that fingering indications are in fact applied to individual note events, and not to, as you might expect, rhythmic positions on the staff. If a chord is selected, numerals from the popover separated by a comma will be applied to each note of a stack. Several numerals without separator will be applied to a single note, the use case being ornaments and brass valve constellations. Dorico 1.2 also allows you to create finger substitutions (by separating numerals with a hyphen), as well as alternative and editorial fingerings (entered into the popover by enclosing numerals in round or square brackets, respectively). 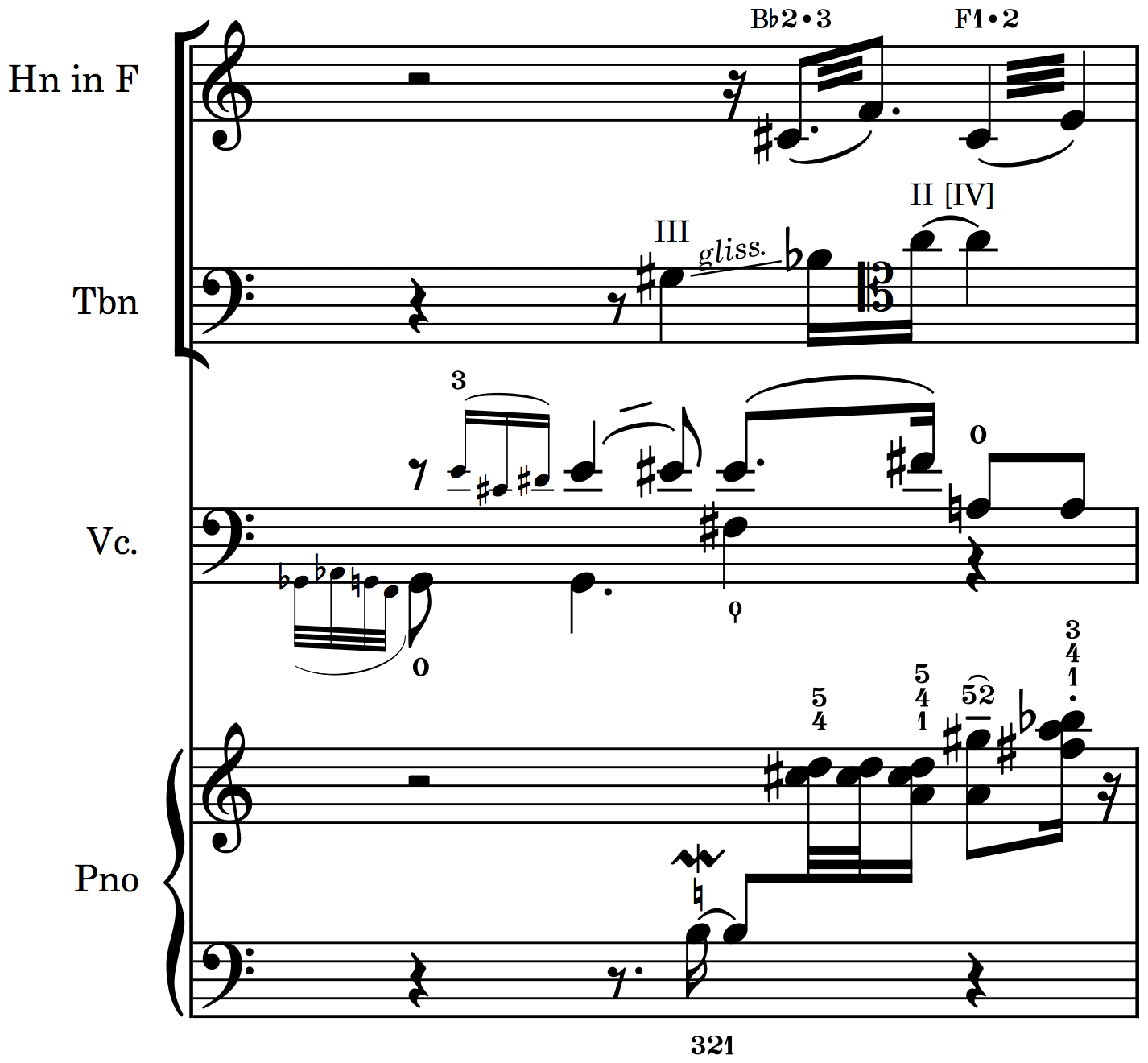 As a consequence, a “zeroth” horn valve or a violinist’s sixth finger can be called for (as alluring as that idea might be), and the cello’s thumb indicator can boldly feature on an organ pedal solo. A few cases, though, are already tightly restricted to their respective instrument types (like horn branch indications and string shifts, the latter even correctly taking into account which pitches are possible on a particular string), indicating that this issue will become more consistent in the future.

One particularly clever detail of the popover entry makes it easy to quickly mark up double-stemmed notes and chords sharing the same rhythmic position. Analogous to how one would most probably think — in the context of fingering — not predominantly of two voices here, but of a pianist’s hand, it is possible to simply select all relevant notes and to then enter all numerals at once; Dorico will automatically distribute them to the suitable notes by analyzing the involved pitches. This, of course, works just as well for ordinary single-stemmed chords. If there ever is a constellation so ambiguous that the program can’t reliably mind-read a user’s intent, it is always possible to enter fingerings note-by-note.

On a keyboard instrument, like in the current example, the program will also make a (staff-based) distinction between inserting fingerings for the left and the right hand, as can be seen below (compare the popover input with the actual result).

If the material for a hand is on the “wrong” staff, this can be specified by preceding the popover input with an appropriate letter. The meaning of l and r should be quite obvious, but several other language cases are covered, too: g, s, i and h for “left”, while “right” can also be indicated by d and m. The latter stands for the Japanese migi, a vocabulary word which, if you want to retain it for showing off, can be etched into your memory forever with a simple Google image search.

Dorico will automatically use the common bracket notation for any input containing the same numeral for subsequent notes in a selection; it will not (and cannot reasonably be expected to) check whether any two notes are actually playable that way, so extra-carefully checking the result is advisable.

Given how previously introduced new features have further evolved so far, I have no doubt that limitations like these will be gone probably sooner than later; I just bring it up here in the context of the comparison with the source example.

Placement of individual fingering indications was unproblematic and easily manageable by properties whenever the intended position was in conflict with the Engraving Options default (for example, indications for double-stemmed passages, in the source, are mostly shown as a block on one side of the stave, but are placed on opposite sides from the middle of the third bar on for the right hand; since only one setting can be the default, a trade-off is necessary in any case). Still, I took the liberty of fine-tuning everything by nudging things around in Engrave mode, which, after all, is that mode’s purpose for exactly that kind of individual positioning.

I did not change the default positioning in the second example, however. My intent is not to disparage Dorico’s automatic placement, but to demonstrate that there sometimes will be situations like in the first two bars, where, unlike in the previous example, adjustments will be necessary beyond mere fine-tuning.

The fourth bar provides one of the very few cases where I was unable to get any acceptable rendering of a constellation without heavy faking: a double substitution (immediately from 3 to 5, and a delayed return to 3). In all fairness, though, so far the only such double substitution that I encountered during my preparation for this review was the one from this very example. I know that they are out there, but given the odds for coming across one, the Dorico developers certainly get a pass for not including this in the current update.

Some very useful settings are available as Engraving Options, but lack a local override. It is possible, for example, to choose between three different global approaches for the display of cautionary fingerings (not shown, shown with or without round brackets); but when preparing technically demanding piano music, any one of these three solutions may be needed on a case-by-case basis.

The problems of the property approach

While users having to deal with an above-average number of highly differentiated fingerings in their work should not be discouraged by my assessment, they certainly should expect to fall back frequently on generic Text (Shift+X) objects for now.

The one quirk that feels the furthest away from the by now established Dorico “feel,” however, is the necessity for the popover to close down completely after any edit. This is a stark contrast to the somewhat related — workflow-wise — popovers for chord symbols and lyrics, both of which do conveniently advance on their own.

With fingerings, an algorithmic approach for finding or making accessible the “correct” next selection to advance to is without doubt much more complex than with chords and lyrics, and chances are that only a relatively small number of users will add and edit fingerings extensively. Those dedicated editors, however, will quickly notice the potential for frustration.