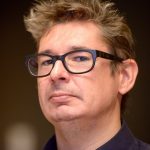 Tim Davies calls himself “really an arranger that fell into orchestrating,” but that barely begins to describe the active and successful musical life that he leads. Born and educated in Australia, now based in Los Angeles, the Grammy-nominated and Annie-winning musician splits his time between orchestrating for features, television, and video games; composing his own scores; and conducting and arranging for orchestras all around the globe.

Tim’s film and TV credits as lead orchestrator and/or conductor include Frozen and Frozen 2, both Ant-Man movies, The Lego Movie 2, La La Land, Trolls, and The Peanuts Movie. He’s prolific in the world of video games, including God of War, Infamous, Sims, the Resistance and Batman franchises, Spider-man, and Halo: Infinite. He’s a busy conductor in concert halls and other live venues specializing in live to picture scores, and we haven’t even mentioned all the special projects he’s arranged for productions like the BBC Proms and Academy Awards. And if that wasn’t enough, that pair of Grammy nominations were for his own big band recordings, where he not only composed the music, but played the drums, as well.

Despite his busy schedule, Tim not only finds time to write extensively about his experience and approaches on his web site, timusic.net, but counts it as one of the most important things that he does. The series of articles about the craft of orchestration — complete with illustrated examples — numbers well into the dozens, and explores related subjects like conducting, jazz voicing, and — our favorite — music notation software.

Philip Rothman and David MacDonald have a wide-ranging conversation with Tim in which all of those topics are explored. We start with Tim’s early days as a student, where he made his own opportunities, and how his initiative and innate musicality combined with a relentless pursuit of practicality — along with a healthy dose of keyboard macros — has served him well as he worked his way to being one of the most sought-after professionals in the business.