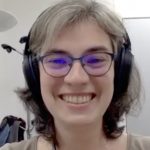 Marie Chupeau joins Philip Rothman and David MacDonald to discuss Maestria, the technology from Newzik that allows it to not just display a score, but also to understand it musically, resulting in what’s known as a LiveScore. Marie is the co-founder of Magic LEMP, the company that has worked for several years on the artificial intelligence technology that powers Maestria, and she is the head of the research and development team for the optical music recognition, or OMR project.

In our discussion, Marie tells us about how she started working on the Newzik project in the first place, and how her vast and impressive background in music and physics led her to tackle the complexities of music notation. She discusses how Maestria uses AI and aims to differentiate itself from other OMR applications by harnessing the power of AI and its algorithms to refine its results over time. We then talk about the practical use of Maestria in Newzik’s LiveScore feature, which enables a user to take an engraved score and turn it into a score that can be played on an iPad or in a web browser, or eventually exported via MusicXML to other software. Finally, we discuss the challenges the technology faces and the opportunity it provides for refinement in the future.