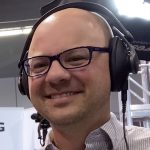 Jason Wick joins David MacDonald and Philip Rothman to talk all about the upcoming release of Finale version 27. Jason is MakeMusic’s senior manager for Finale, and he gives us an inside look into its development, the planning process, how new features are considered, and how they’re eventually incorporated into the software that we use. We hear about the brand-new support for the Standard Music Font Layout, or SMuFL, that’s included in Finale version 27, and how that will make it easier for users to switch between music fonts in their document.

Jason also talks about some of the other new features in Finale, like project sharing and MusicXML 4.0 support, which improve how people work with other tools in conjunction with Finale, and we learn what’s in store for future updates beyond this latest release.