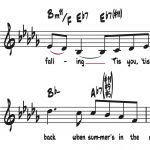 Darcy James Argue returns to Scoring Notes to talk with Philip Rothman about his role in creating the fully revamped SMuFL-compliant jazz default file and document style in the Finale v27.2 update. Darcy’s a composer, bandleader, and, as pertains to today’s topic of conversation, world-renowned music preparation expert, particularly when it comes to Finale.

Darcy’s a stickler for detail, and he tells us all about the process of overhauling the Finale Jazz defaults, with more than two decades’ worth of items on his wish list. One of those items is the addition of lower case characters to the JazzText font — something that users have been asking for since it was first introduced by Rich Sigler back in the 1990s. It’s not just an aesthetic preference; when used in chord symbols, they make it much easier to read and understand.

The chord symbols in the new SMuFL Finale Jazz Font Default are all made up of individual characters (not single-character JazzChord glyphs) and can all be typed directly into the score, and Darcy discuss the process of stripping down the original font into its most basic elements and reconstituting them to be used in as many chord symbol combinations as was practical to include.

There are also many differences under the hood in Document Options, such as tie and slur appearance, tuplet bracket appearance, margins, and layer settings, and Darcy tells us about the inspiration for those — including everything from Judy Green manuscript paper to the artful copyists of the golden age like Clinton Roemer and Bert Kosow. We also talk about what this means for Finale users now and in the future.