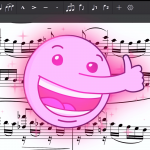 Not coincidentally, this is also the first major version of of MuseScore to be released under the product leadership of Martin Keary, Muse Group’s vice president of software. Coming nearly two years after the last MuseScore update (3.6) and nearly four years after the release of MuseScore 3, Martin said, “I’ve worked on a lot of complex creation software and this is the largest release I’ve ever put out,” including the launch of Paint 3D and a variety of PS3 games.

Martin returns to the Scoring Notes podcast along with Simon Smith, Muse Group’s head of engraving, to talk with Philip Rothman and David MacDonald for a thorough discussion about MuseScore 4’s design and engraving improvements. We go behind the scenes to hear about the decisions, roadblocks, and good fortune that happened along the road to the release of this version of the software.

They discuss their philosophies about creating tools for musicians and how they approached the challenges of modernizing an existing application, all the while keeping both existing and new users in mind. We cover the details of engraving, including ties, beams, note spacing and more. Martin and Simon tell us their favorite “under-the-radar” features in MuseScore 4 and highlight some items that users might not be aware of. Finally, we learn what’s missing in MuseScore and what to expect as they continue to develop the product for MuseScore 5 and beyond.