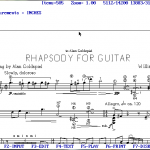 Scoring Notes
Back to the future of music notation on computers

Before the personal computer revolution of the late 1970s, computers were so large and so expensive that they could only be found in universities and government departments. But almost as soon as there were computers, people were figuring out how to use them for creating and printing music.

Ben Byram-Wigfield joins Philip Rothman and David MacDonald on a journey back in time and again to the present day to discuss some of the key moments of encoding music notation in the form of 1s and 0s.

We start with the huge mainframe computers of the 1950s which, despite having mere kilobytes of memory and storage capacity, were capable of creating some of the first machine-aided music.

As plotter printing technology emerged, so too did computers that could produce music on thes machines. Leland Smith’s SCORE took hold at some of the major publishing companies and was groundbreaking in the way it drew music notation without using any fonts.

Eventually, music fonts were necessary, as well as a way of sharing music amongst the varying formats that were used to encode music. Ben was a classmate of Jonathan and Ben Finn, the co-founders of Sibelius, and we race toward the present-day to look at the current landscape of music notation applications, as well as those that got left in the DeLorean’s rear-view mirror.