A Notion of the future - Scoring Notes
Skip to content 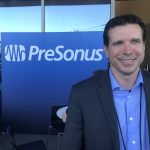 Scoring Notes
A Notion of the future

Philip Rothman and David MacDonald talk about the news that Fender has made plans to acquire PreSonus, and dig up an interview with Jim Boitnott from the Scoring Notes archive. Jim gave an interview to Scoring Notes in 2019 in which he presciently described both the importance of playback to music notation software as well as the future of those applications on iPad, and how Notion was early to market in both respects.

We play that brief interview, which took place at the 2019 NAMM Show, and then put the news of the week in a bit of historical context and look at the larger picture of music notation and audio applications in light of current developments in the field.