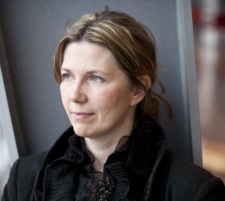 In March of last year, I posted about a competition being run by Abbey Road Studios in London to celebrate the historic studio’s 80th birthday. Eight winners were eventually chosen from more than 900 entries, and of course many of the entries were composed or prepared in Sibelius. One of the winners is an anthem called The Angel by composer Tina Andersson from Gothenburg, Sweden. Read on to find out more about Tina, and hear her winning entry in its entirety.

Tina divides her work time between working in the music library at the Gothenburg Opera and working as a freelance arranger/orchestrator and music engraver. The score for The Angel was produced in Sibelius 6, though Tina is now working with Sibelius 7. After studying flute at Gothenburg University Tina became a professional flute player in the Gothenburg Wind Orchestra. Tina has also worked as a conductor with wind bands, choirs and youth orchestras.

Tina was overwhelmed when she heard that her anthem was one of the winning entries in the competition. “When you realize that Eric Whitacre’s voice is on your phone, letting you know that they are head over heels in love with your music, your whole world changes,” she said.

Congratulations to Tina on your win, and indeed to all of the other winners!

To celebrate the 80th birthday of the world-famous studios in London, Abbey Road is staging a competition to find the...

I was delighted to receive a letter here at Sibelius HQ from a young composer called Julian Pombo, who has...