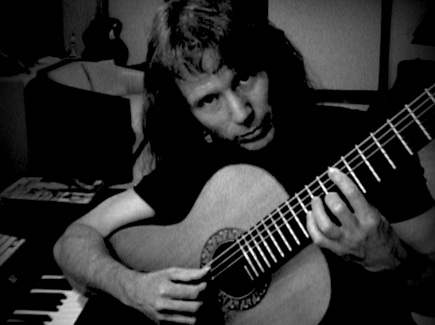 Kevin Callahan is a Seattle-based guitarist, composer and teacher who happens to be a Sibelius user. I’ve communicated a lot with Kevin over the years: he’s a Mac enthusiast, dabbles in software development, and always has interesting ideas about how Sibelius should be developed.

Kevin was recently interviewed by Christopher Davis, who runs The Classical Guitar Blog. Chris heard one of Kevin’s pieces, The Red Fantasy, and decided to interview him for the blog.

The interview is in two parts, and is worth checking out. Kevin says about his compositional process:

I’ve worked directly with my editor of choice, Sibelius, and sometimes with a guitar (and or cat) on my lap. Sibelius makes it very quick and easy to produce great results and allows me to work fast. For “The Red Fantasy”, I took a different approach: rather than going directly to the score, I sat in front of my Mac and launched Quicktime Pro to video-capture improvisations and record rough ideas, shapes, colors. Sometimes I used PhotoBooth as it can also record audio-video. Later, I’d transcribe what I played, more or less, and rework the ideas into the composition using Sibelius.

Thanks for using Sibelius, Kevin!

MusicNotes.com has this weekend published an interview with Kevin Kern, the pianist and composer, who was kind enough to send...

The man with only one name, Erik, writes on his blog: …if you like a more classical approach, there are...