On the Scoring Notes podcast, David MacDonald and Philip Rothman talk with percussionist and author Sam Solomon about writing multi-stave parts, improvisation, unpitched music, and more — and we explore the role music notation software has in achieving the results percussionists want to see. Listen now:

Scoring Notes
How to write for percussion

Even though I gave up my sticks and mallets many years ago, I’ve always been grateful that my formative years as a music student were spent in the back of the orchestra, for a few reasons. As a percussionist, I was often counting many bars of rests between important but sparsely-placed bass drum hits or cymbal crashes, at least in the classical repertoire.

There’s only so many times one can count to 120 before finding a new form of amusement. To keep myself occupied, I turned to perusing the full scores of the works I was performing — thereby sparking the journey down the road of unlocking the secrets of how the music was put together and eventually further studies in composition and orchestration.

Throughout my years composing and preparing music, that background in percussion has served me well. I’ve often thought how difficult it can be for a non-percussionist to grapple with the myriad instruments and techniques that are prevalent in the percussion family, and the many challenges and pitfalls than can dot the path to a successful approach to writing for percussion.

Fortunately, for anyone who wants to tackle that task of creating percussion music and didn’t have the pleasure of moving entire sets of timpani on cross-country road trips, there’s an invaluable resource you’ll want to have at the ready. How to Write for Percussion: A Comprehensive Guide to Percussion Composition is a 300-page book by Samuel Z. Solomon with a wealth of information, guidance, opinions, and reference material on the subject, accompanied by nine hours of quickly-paced companion videos. 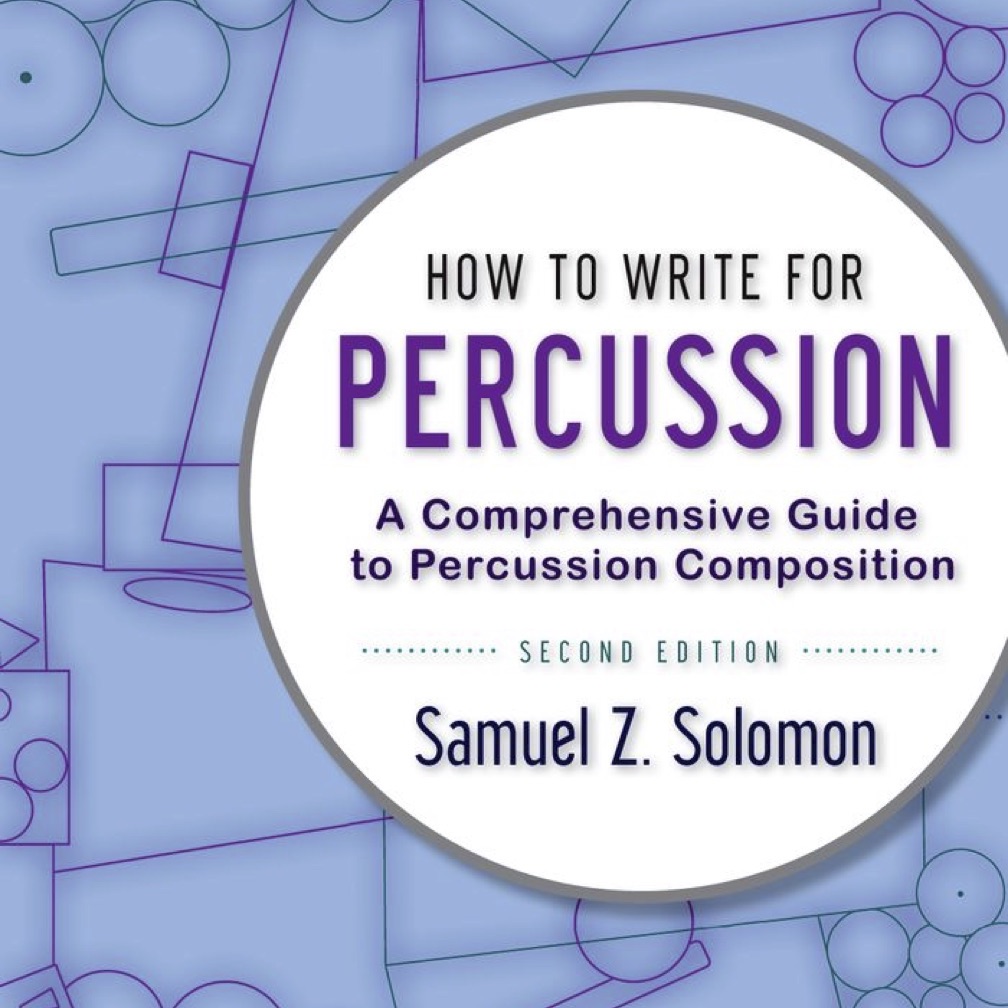 I met Sam more than 20 years ago as students at Juilliard, and soon thereafter he self-published the first edition of this book. “When I was in school, I started working with composers in a very earnest way and not just in a casual way,” Sam told me and my co-host David MacDonald in our podcast episode. “I was thinking, let me try to actually give you some good information that would be helpful so that you know what you’re doing when you’re trying to write for percussion. And I found that, if they wanted to write for a marimba solo or, just timpani or something like this, I could go on and on about all the things that one could do with that instrument. But if they said I’ve never written for percussion before, where should I start? What should I do? I found that I felt as lost as they were. There’s just too many things and too many ideas and too many thoughts.”

“If I try to step into the shoes of someone who’s never experienced this stuff and isn’t as intimately involved as percussionists are,” Sam said, “this is super overwhelming. I don’t even know where to begin. I thought, ‘Oh, there must be a book. I’m sure someone’s written a book!’ … And so I looked at the available literature and there were some decent attempts at it, but a lot of them were written by composers instead of written by percussionists. I thought, in reading them, I felt some of them were out of date. Percussion is constantly evolving, and many of them just were incomplete or misrepresentative. I thought about what worked and what didn’t work and what kind of notations I wanted to see. So I thought, maybe I’ll write a book.  I started as a sophomore in college and I started just accumulating. If I saw something that I thought was a good idea, or if I saw something that I thought was a bad idea, I just jotted it down, and just started compiling the information.”

While the result of Sam’s efforts were evident in the first edition, he didn’t stop there. The second edition, published in 2016 by Oxford University Press, has the benefit of more than a decade spent in the professional arena, collaborating with other musicians, and the natural evolution of instruments, techniques — and, of course, notation.

“I always tell composers that notation is a form of communication,” Sam told us. “When you’re alone in your studio, notating something at two in the morning, you’re already having a conversation with your performers. You’re reaching out and you’re speaking to them. And so the more you can think about that person receiving that information, the more clear this information is to your performers, the better job we’re going to be able to do to realize the sound that you have in your imagination and that you’ve already translated into this notation. So the more you can make that very clear, very simple, and very much connected to things that we’re familiar looking at, the more successful it will tend to be — especially if there’s not a lot of rehearsal time, if it’s a recording session or reading — it’s all the more important that the notation is as clear as possible.”

In our podcast episode, and in the book, Sam talks about the “dysfunctional family” that is the percussion section, and how best to sort it out. He illustrates the dichotomy between how music looks on the page and how it is perceived by the player, and we talk about the ways the composer or music preparer can achieve satisfactory results in music notation software.

This is just one of hundreds of nuggets of useful information that anyone writing for percussion will find valuable. In the percussion family, we are accustomed to dealing with what we think of as “unpitched” instruments, But Sam opines that a better term is “inderminately pitched” instruments, because it helps us more thoughtfully consider those instruments when it comes to how to notate for them and arrange them within the score so that it is most helpful for the player.

One point we often make around here is that the investment spent on quality music preparation will reap rewards during the rehearsal and recording process. In that same spirit, an investment in a quality reference like How to Write for Percussion will pay dividends many times over, whether you’re a seasoned music preparer or still accumulating knowledge (aren’t we all). The videos are the icing on the cake!

We present part 3 of our Dorico 1.2 review — a look at the new percussion features that arrived in...

Whether you're buying for yourself or a like-minded music and technology enthusiast, get the lowdown on some products that see...

I get asked surprisingly often how to create an instrumental part containing multiple staves. It’s not surprising that I get...