New York-based copyist and orchestrator Bob Nowak has worked with some of the biggest names in the music business in a career spanning decades. In recent years he has developed a strong partnership with composer William Perry, who is most famous for composing and performing piano scores for more than three hundred silent films while working at the Museum of Modern Art in New York.

I spoke to Bob about his working process and how Sibelius fits into his workflow. More after the jump.

Bob was introduced to William Perry by a colleague a few years ago. “Bill was looking for someone who could transfer his earlier music to computerized notation.  He knew that somehow the digital format could be more flexible than his pen and ink scores and parts, and that possibly it could be useful in a number of ways that remained to be discovered,” he says. “He was looking for someone who could help him explore those possibilities. I showed him printed samples and I demonstrated some of Sibelius’s features like playback, and easy transposition.”

Perry liked what he saw. “He was impressed with the look and feel of Sibelius on paper; the fonts and layout, how it seemed to flow naturally and how it just felt musical. He engaged my services, and since then we have become close colleagues and good friends.”

Bob has already worked with the composer on a previous concerto, the Jamestown Concerto for cello and orchestra, which commemorates the founding of America’s first town in 1607. “The cello was particularly challenging because the instrument itself speaks well in such a wide tonal range that it duplicates the sweet spot of nearly every other orchestral instrument. Each accompaniment section demanded that I double- and triple-check the delicate balance of orchestral sounds that I heard in my mind with the voice of the cello at that moment.”

But despite Bob’s well-honed orchestration skills, “All the concertos pose interesting challenges for me in trying to incorporate the composer’s wishes without getting in the way of the solo instrument or without hiding it beneath the orchestra.”

Because Perry’s own expertise is with writing for piano, the partnership between composer and orchestrator is particularly key to the success of the works; and it is a true partnership, not a simple hand-off from composer to orchestrator.  “We discuss the piece and exchange ideas and reactions, and talk about possible instrumentations or limitations. This lets me know from the beginning the direction he wants to take, the proper tempos, emotions and nuance. It is much more visceral than just reading the notes and metronome marks on paper.”

So when does Bob get involved, and what does the music look like?

“Bill often starts with a preliminary pencil sketch of the composition: two or three staves for the orchestra (additional staves for a concerto), but not complete. He usually has a more complete idea in his head, though not on paper, and he will sit at the piano and play it for me. He may sing the parts he cannot play and while still playing the piece he will describe what he hears in his head at that moment, like instruments or splashes of sound. He’s also very descriptive, often visualizing a detailed scenario, like a scene in a movie, even for only a section of the piece.”

After composer and orchestrator have discussed the sketches in detail and exchanged ideas, Bob sits down with Sibelius to get started.

“I copy his sketch into Sibelius, correcting whatever notation oddities may have occurred in the creative process. It sounds simple – just copy the sketch – but the actual work can be rather complex because I have to place all his orchestral ideas onto two staves. He and I have developed a method of producing these Sibelius sketches that work well as a piano accompaniment for the concerto soloists: there is more material than a typical piano reduction, yet it is still playable by a judicious accompanist.”

Here’s a short fragment of a typical sketch after Bob has copied it into Sibelius, taken from the Gemini Concerto for violin and piano: 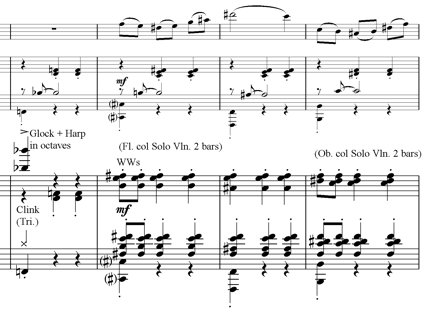 Bob sends the sketch to Perry in PDF format, together with an MP3 created using Sibelius’s built-in playback sounds. The two men then meet again to go through Perry’s changes and additions, sometimes as many as half a dozen times, though there are occasions when they have to rely entirely on technology to get the revisions done in time. “We both work in two different cities as well as travelling to other places, so collaboration by email is an important part of our work process.”

The sketches are then printed and bound so that the soloist can rehearse with the composer, after which there are normally a few more changes.

“At this point,” says Bob, “I am ready to orchestrate. The sketch is in front of me on screen as part of the full score, ready to copy into other staves or to help tweak my brain for ideas. Using features like Focus on Staves, Panorama, and the many keyboard shortcuts that are built into the program has made my transition from writing on paper to writing directly to Sibelius easy, efficient and, above all, pleasant.”

Once the final orchestration has been completed, Bob and Bill look over the orchestration together. This can throw up a few surprises! “If I feel strongly about using different instruments then I will point it out and we will discuss it. Also, I may have used an unexpected technique that takes him by surprise, or he may want to expand upon something one of us wrote, or even add something new.”

Does this ever cause disagreements? “Contrary to what some may think, this collaborative approach has proven beneficial. No matter who initiates the idea, we both want only the best setting for the music itself, and the end result has always been better for it.”

The final destination makes the journey worthwhile. “The last step is to print the final score and orchestra parts, and then listen to the performance. It is a joyful process.”

I asked Bob which features in Sibelius were particularly helpful for his work. “There are so many other features of Sibelius I depend on that I might just recite the user manual!”

Bob has, however, found that playback has become an increasingly important feature, particularly for helping his clients understand the sounds that he has learned to hear simply by looking at the page. “I learned my craft through live orchestras and bands – I performed in big bands and small bands, in theatre pits, opera, ballet and symphony orchestras – and those are the sounds that are in my head,” he says. “I always imagine the sound that I want first, even if it is unusual, and then figure out what instrument or combination of instruments will give it to me, even if it is an electronic or synthesized sound. I control on paper what I want to hear in a live performance; I don’t let the program make that judgment for me.”

Nevertheless, the improving quality of Sibelius’s playback sounds make it a useful tool. “I find that the default Sibelius sound files, especially now in Sibelius 6, are quite good, in fact good enough to allow a third party to get a reasonable sense of how the music will sound, so creating audio files has become another essential function. I am thankful, however, that most of my clients are familiar with the sounds of a live orchestra and read scores well enough that they don’t need to rely on the MP3 as the final word on how my orchestrations will sound.”

When it comes to getting the composer’s intentions down on paper for performers to play, other features are even more important. “You must have heard this a thousand times, but Dynamic Parts have revolutionized the creation of parts! Having been a professional copyist for so many years, part of me bemoaned the fact that it became so relatively easy to create your own orchestra parts – that you can do it yourself rather than hiring me or my colleagues! – but the reality is such that it still takes a trained and experienced hand to produce a professional part. I have come to love this feature. I can produce finished parts for a full orchestra in a fraction of the time that it would take a team of hand copyists to do the same – and not have to worry about mistakes!”

Sibelius has become an invaluable tool for Bob and others like him. When asked to sum up his experience of working with the software, he says, “The bottom line is that writing my music and producing professional scores and parts has become easier and more efficient with Sibelius than ever before.”

Composer, orchestrator, arranger and educator John Ashton Thomas has worked on some huge Hollywood hits over the years, arranging or...

A few weeks ago, the St. Louis Symphony Orchestra played the opening gala concert of the 2010/2011 season at Powell...

This Sunday sees the US broadcast on HBO of the first episode of a major new ten-part miniseries called The...