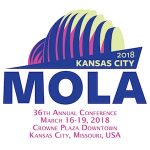 Note: This week we’re publishing posts related to the 2018 Major Orchestra Librarians’ Association (MOLA) Conference, hosted by the Kansas City Symphony and held downtown Kansas City, Missouri from March 16-19, 2018. In this post, we talk with Steve Reading from Scores Reformed, a publisher that produces new editions of out-of-copyright works.

Scores Reformed was founded in 2009 by Ann Miller and Steve Reading. On their web site, they state that “after years of playing from often very poor quality parts, we were determined to improve the standard of printed music and so began our campaign to rid the orchestral world of the substandard copy which plagues many of our great orchestras’ libraries.”

That seemed like a worth mission if ever I had heard one, and four years ago I interviewed Ann and Steve at the 2014 MOLA conference in Miami. Fast forward to the 2018 MOLA conference, and I found myself talking with Steve again, due for some catching up. March in Kansas City wasn’t as balmy as May in Miami, but Steve said that activity was white-hot.

“The last couple of years have been manic,” he said. “We have new distributors in Germany, Sweden, and South Korea. We’ve just broken into the Eastern European market, which is good. We’ve just done Debussy’s Images. Before undertaking that project I hadn’t realized how big it was!”

Scores Reformed’s work includes commissions. “We’ve just done a commission for an orchestra in Belgium of César Franck’s symphonic poem Redemption,” Steve said. “For another project we are working in collaboration with The Juilliard School. Generally we work either on commission, or when someone asks us if we can create a new edition of a work, we evaluate whether or not it can go in our catalog. In that case we give them the catalog [sale] price.”

That catalog has grown to more than 400 works, thanks to careful research done in advance, Steve said. “I look very carefully at the list of composers’ deaths to find out when they’re coming out of copyright. For instance, we’ve done several of Manuel de Falla’s works, including The Three-Cornered Hat, which has come out within the past year. The next big one is Richard Strauss. So I’ve already set Don Juan, Death and Transfiguration, two horn concertos, and an early wind serenade. I’m now working on Ein Heldenleben, which is massive! Those will not be available until after the copyright has expired, of course, but we want to be ahead of the game. We found that, with Bartók — we’ve now set about 15 of his works — we started working on his music about a year before it came out of copyright. I sent a letter to customers that I thought would be interested, saying that we will make this available from midnight of the first of January, and you can have it. We were inundated.”

With the business approaching its tenth anniversary, I asked Steve how they built the business and what he’s learned along the way. “I started off ten years ago as an ex-horn player, not a businessman,” Steve said. “I’ve had to teach myself what it’s like to do business, how to approach people, talk to them, get their interest, and hopefully sell them our music.”

As far as the process of creating scores, Steve said, they use Sibelius. “Every day we learn something new. If you recall, when we spoke in New York, we were talking about scaling notehead sizes, which eventually led to Bob Zawalich developing his plug-in. I now use it in everything I do. The first thing we do is adjust the notehead size to 110%. It makes a difference, and it’s in our house style.”

The MOLA conference has become a required annual stop for Scores Reformed. “The first MOLA conference we attended was in London in 2011,” Steve said. “We got a lot of contacts, a lot of goodwill, and a lot of work. Since then, it’s become something I have to do — I have to come to MOLA every year. As a small outfit, compared to the bigger publishers, we could easily get overlooked. So I’ve got to be here. I don’t bring many samples, because it’s too heavy! But every year I come here and I see people who have had our products, and I don’t think there has ever been anyone who has said, ‘why are you doing this?’ Everyone is very complimentary, and they put it around to other librarians.”

The name of the company — “Scores Reformed” — may actually be a slight misnomer, Steve said. “Our mission statement, right at the beginning if you like, was to produce music for the players to play from. We weren’t so concerned with the scores in many cases, because conductors often have scores that they own that they have already marked up. But the standard of music copy for the players was appalling. So we decided that we needed to try and remedy that.”

Steve noted a couple of side benefits to his job: “I get to see the world, as well… and it’s tax deductible!”

From June 3-6, 2022 in Philadelphia, MOLA: An Association of Performance Librarians held their 40th annual conference, and by all...

nkoda, a London-based company, aims to bring a subscription model to sheet music. Development and licensing has been in progress...

I'll be attending and presenting at the 36th annual conference of the Major Orchestra Librarians’ Association (MOLA), hosted by the...