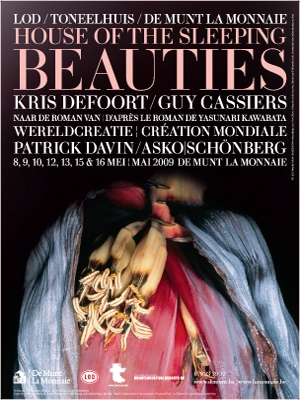 Paris-based music engraver Wim Hoogewerf got in touch with me to tell me about an 18 month project that he’s been carrying out in Sibelius that is shortly to come to a successful end. He’s been preparing the full score and all of the instrumental parts for the world premiere of an opera by the Belgian avant-garde jazz pianist Kris Defoort, with a libretto by Guy Cassiers. The new opera is called House of the Sleeping Beauties and will receive its first performance at La Monnaie in Brussels on 8 May 2009. Wim says that there are already plans to tour the opera around Belgium, Luxembourg, France and Holland in the coming months.

Wim told me, “I’m particularly satisfied with this project, especially concerning the work-flow and all the communication. I worked all by myself and could do the entire score production on screen without any paper print-out.”

As is frequently the case in large, complex projects of this kind, everything came down to the wire: the composer finished his last page of manuscript at 9am on Monday, 30 March, and Wim had only two hours to get the full score and piano reduction onto the stands for the soloists’ first rehearsal at 11am. Wim achieved this, with the help of various plug-ins that go some way towards automating the preparation of reductions.

“I talked with Kris Defoort by phone,” says Wim, “but didn’t need to meet him physically and actually never did. We’ll meet for the first time the 8 May in Brussels on the first performance. I simply received scanned manuscripts by e-mail and sent engraved PDF-files in return, which were immediately transmitted to all people involved: conductor, musicians, soloists…”

Wim even prepared audio files to assist the singers and choreographer before rehearsals began. “They were extremely pleased with the instant playback provided by Sibelius Sounds Essentials — it seemed to help them a lot!”

The combination of the skills of people like Wim and the time-saving features included in Sibelius is a powerful one, and it’s always fantastic to hear about big new projects being completed in Sibelius. If you’re involved in any interesting projects that involve using Sibelius, get in touch!

One more story from my friend Wim Hoogewerf for today. He says: Last sunday I assisted at the first performance...

I always enjoy hearing from Wim Hoogewerf, about whom I’ve posted before. Yesterday Wim got in touch with me to...

The author Ian McEwan has collaborated with composer Michael Berkeley on the opera For You, which will be premiered at...