Anton Coppola, conductor, composer, founding artistic director of Opera Tampa, and “maestro” to everyone else, died yesterday in New York at the age of 102. In addition to Tampa, Coppola conducted many of the country’s opera companies, including the New York City Opera and the operas in Cincinnati, San Francisco, and Seattle, according to today’s obituary in The New York Times.

As a composer, Coppola was responsible for the opera Sacco and Vanzetti, which premiered under his baton in Tampa in 2001. Writing about the premiere in the South Florida Sun-Sentinel and Opera News after the premiere, reviewer Lawrence A. Johnson called the opera a “triumph” for Coppola and described a company of nearly 100 people crowding on stage for the curtain call. The opera revolves around the real-life story of Nicola Sacco and Bartolomeo Vanzetti, two Italian immigrants who committed armed robbery in Massachusetts in 1920. Their escapades, trial, appeals, and ultimate execution fascinated the country for the rest of that decade.

Johnson praised Coppola’s opera, calling the music “snappily orchestrated,” with the composer varying “the music and pace with skill.” He said, “All credit to Opera Tampa for taking a big gamble on Coppola’s opera and making it pay off so handsomely. The large resources required for Sacco & Vanzetti will work against a second production and the opera’s chances of being picked up by other companies. But Coppola’s opera is a compelling and attractive work that merits wider hearing and advocacy. Time and the always crucial second production will tell.”

It was with that second production in mind that I received a call from Opera Tampa in early 2008, asking if I’d be interested in engraving the piano-vocal score to Sacco. “Yes, of course,” I eagerly replied. Although I had been engraving music professionally since the early 2000s, I had only founded NYC Music Services in 2007. This project was one of the first large projects I undertook under the auspices of my new company, involving all of our comprehensive services of engraving the score from manuscript, editing, proof reading, and printing, and I was excited to take it on.

I first met “Maestro”, as I called him, in person in May 2008, when he invited me to his Upper West Side apartment not far from where I lived. He offered me a vodka martini, which I respectfully declined, and we proceeded to review his manuscript. There were multiple volumes, all meticulously hand-copied by Coppola himself. He showed me all of the cuts and changes he wanted me to incorporate into the published edition.

“So, you’ll do this?” Coppolla asked me in what I would come to appreciate as his direct, efficient communication style.

Two weeks later we met at the Buckingham Hotel (now known as the Quin), a historic artists’ haven, to sign the contract for music preparation. Sacco and Vanzetti consumed most of my summer as I would enter in every note of the score into the computer, to be reviewed by Coppola.

He called me frequently to inquire about the status of the project. “Philip, it’s Coppola,” was his usual introduction. In July he came to my studio to review the latest proofs.

At that time he had a change of heart about cutting a couple of scenes, and instead wanted me to engrave them but to mark them “optional”, and I obliged. This pushed back our completion by a few weeks but we all felt it was worth it. I would come to learn that an opera is never truly finished!

Indeed, we had to employ a somewhat unconventional numbering scheme. Because a complete renovation of the orchestral material was not part of the project scope (and unlikely to be undertaken), our piano-vocal score had to match the orchestral material, which was marked with cuts and other navigational aids. So rehearsal marks such as “5” and “42A” often appeared non-consecutively, and other marks were omitted. This, we felt, was the best compromise.

This was evident immediately, where the rehearsal mark sequence goes from “1” to “4” with no intervening “2” or “3”. 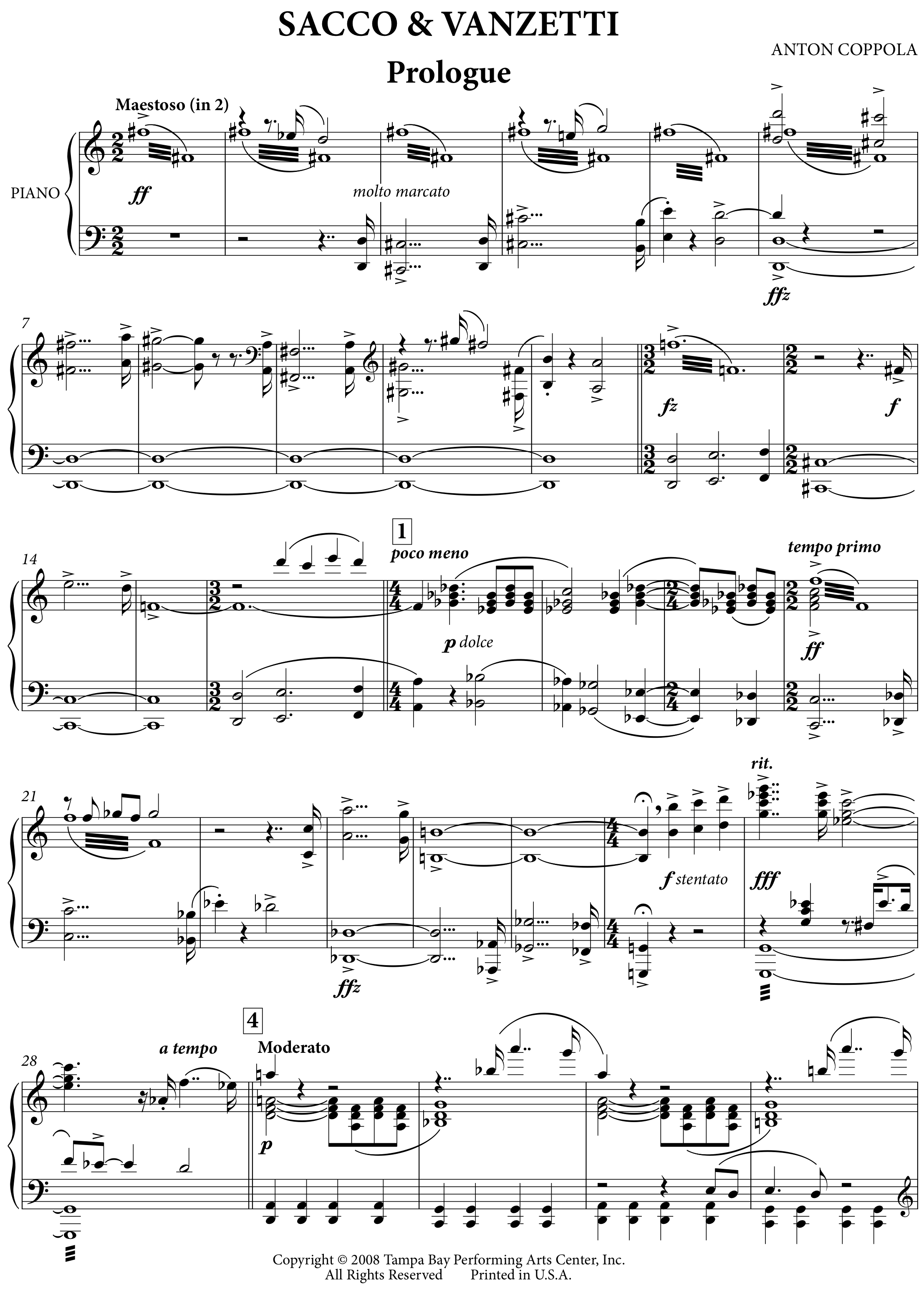 The opera also posed other challenges such as its dual-language libretto (Italian and English). When it came to music preparation, Coppola valued my judgment but always retained control over the finished product. I presented him with several house style mockups and he settled on one that was set in Sibelius 5, but interestingly used MakeMusic’s Maestro music font for many of the characters (a precursor to the work we did on the Norfolk font, which shares a lineage with Maestro), and Minion Pro for the text. Who knows, maybe the name of the font appealed to the “Maestro” more than anything else!

Weighing in at 315 pages, Sacco was the longest project I had worked on to that date, and still remains among the most substantial compositions I’ve prepared. The score to Sacco and Vanzetti still occupies a place on my shelf, and today I took it out to leaf through it and remember Maestro Anton Coppola. He and I stayed in touch for several years following our collaboration, and I feel fortunate to have been a small part of the life of a musical legend who claimed to be “the last living link to Puccini,” as he told the Tampa Bay Times in 2017, at a 100th birthday gala in is honor that included his talented artistic family in the audience.

My only regret is that I declined the vodka martini that he offered me at the start of our work together 12 years ago. I’ll be sure to enjoy one tonight and raise the glass in his honor. 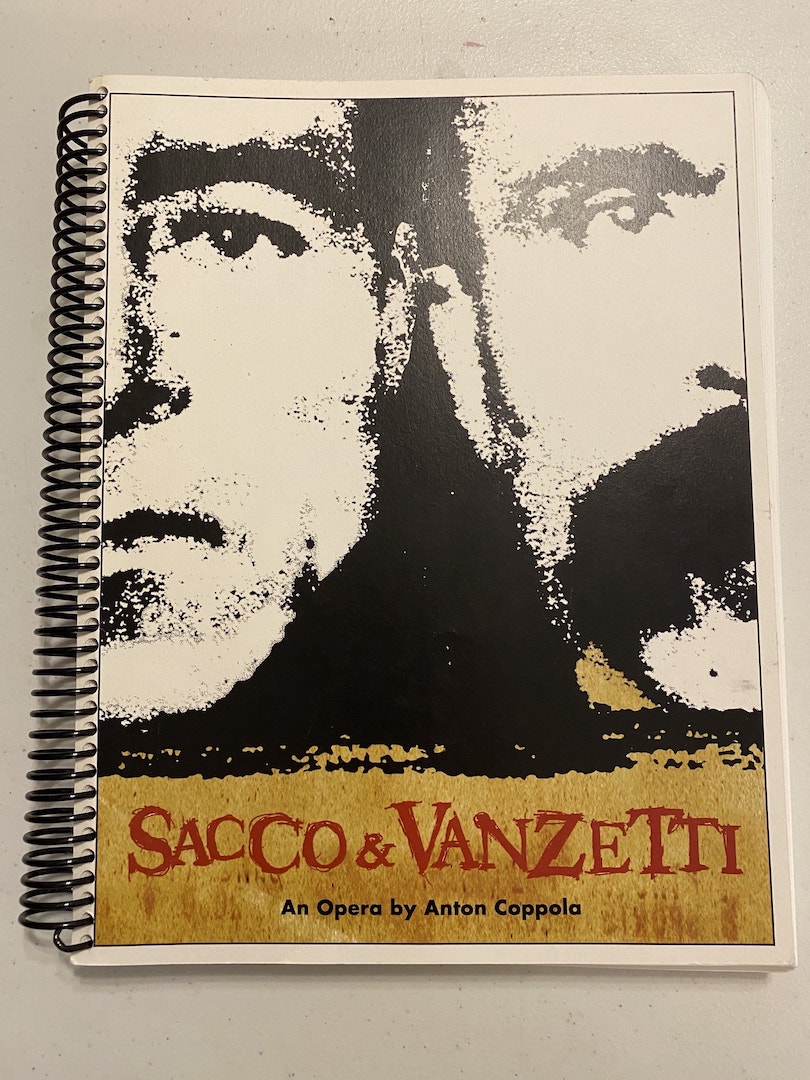 Paris-based music engraver Wim Hoogewerf got in touch with me to tell me about an 18 month project that he’s...